Today is my Blog Anniversary! It's 2 years since I started blogging and photography. In 2010 I bought Jane a camera for her birthday (13th Aug) and I inherited a cast-off one from her, which I used for a few months before I acquired the Olympus E450 which I currently use. It served me well, because I am now well and truly hooked. To celebrate my Blog Birthday I am going to write about one of my favourite vegetables (fruits?) - the tomato - which I have been growing with much enthusiasm and mixed results for the last 20 years or so.

This year my tomatoes seem to be pulling through quite well, despite the blight. Some of my plants are looking a bit sparse because I have picked off so many blighted leaves, but I am still confident of a decent harvest.

One of the star performers is "Sungold", a very well-known variety, popularly reckoned to be amongst the best tomatoes of all time for flavour. Funnily enough this is the first time I have ever grown it, but I don't think it will be the last.


Sungold is a very prolific fruiter too. Look at the number of fruits on this one truss: 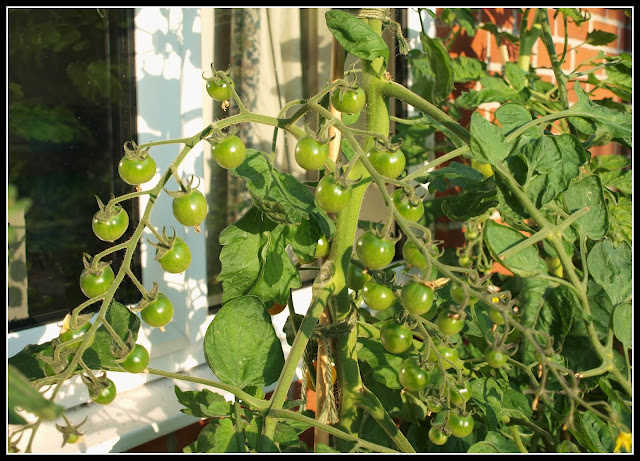 
I have just one plant of "Roma", which I planted very late, as one of my Reserves. It has got some good-looking fruit on it despite having blight in some of the stems.

I have just harvested the first few of my large tomatoes - "Orkado". This foursome weighed-in at 341 grams.

I have already harvested loads of the little "Cherry" tomatoes though. This is "Losetto". Very similar to "Lizzano" which I also have. They both produce very small fruits. Come to think of it, they're about the size of a cherry!

"Losetto" and "Lizzano" are all very well, but it would take a lot to wean me away from "Maskotka".

Now for the bad news. This, I'm afraid, is one of the fruits on my "Incas" plant. You can see that it is clearly doomed!

But this is more like it (elsewhere on the same plant):

I have been pleasantly surprised to see that the blight-affected plants have managed to produce new foliage. This is most unusual. I normally reckon that once a plant is affected by blight it is almost certain to die very soon. Not this year, evidently. Maybe the weather conditions have not been conducive the the blight's spread?

So, as you can see, a mixed result again. Next year I will probably revert to growing mainly the blight-resitant varieties, of which there are currently only a few available to purchase. [I have Ferline and Orkado, but I have also had Legend.]  I usually do this the year after a major blight attack - and then of course we have a year without blight and I think I'm safe to go back to growing all sorts of different toms...!
Posted by Mark Willis at 17:30