As many of you know, this year I have been growing a few of the Sarpo ("SARvari POtato") disease-resistant potatoes developed by the Sarvari Trust, kindly provided to me FOC for review. Recently I have harvested some of them, so I feel it is time to report how they have done.

Bear in mind that all of mine were grown in plastic pots, one seed tuber per pot, and using a growing medium composed entirely of composted stable manure.

The first to be harvested were "Shona", planted on 18th April and harvested on 22nd August.


This pot yielded only a fraction over 700g which was OK but unremarkable. There were 19 useable tubers, the biggest of which weighed 114g. This variety is marketed as an Early Maincrop variety, so I thought it might not be ready until maybe mid-September, but all its foliage had completely died down and I don't think the tubers would have grown any bigger if I had left them longer.


The tubers were nice and clean (mostly because of the growing-medium I think) and quite regularly shaped. We ate them boiled and found them very tasty (Jane said "That's how a Jersey Royal tastes.") and they retained their texture well, without disintegrating at all.

The other variety I have harvested is "Sarpo Kifli". This is marketed as an all-year Salad potato. Planted on 18th April, harvested on 27th August. The yield was better - 974g and 22 useable tubers, the biggest of which weighed 108g.


I like the oval shape and relatively uniform size of the tubers. 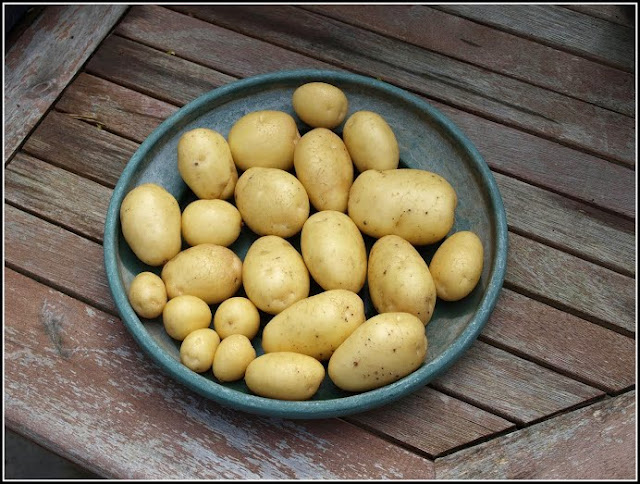 The skins of this batch were a little rougher than many varieties I have grown, but overall the quality was pretty good.

The texture of the cooked Kifli was good too - quite waxy - but we felt that the taste was rather bland. It might be better if served cold.

My third variety is "Sarpo Axona", but this one is not ready to harvest yet. Its foliage is still green and upright. I'll wait till it dies down before harvesting. 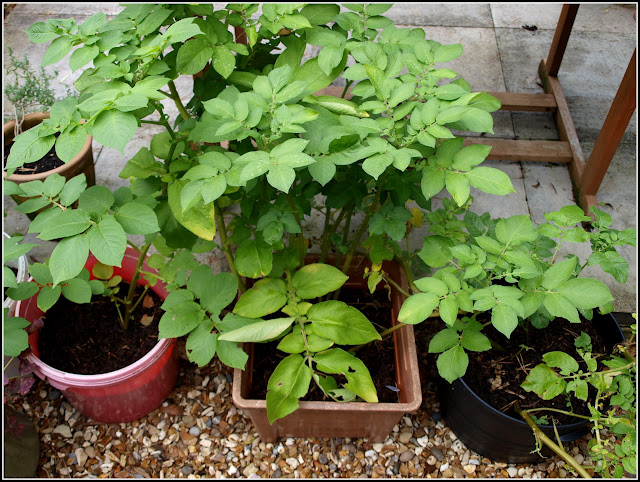 It's actually a good idea to have the potatoes mature at different rates, in order to extend the harvest period. Usually I only grow Early and Second Early varieties (with the exception of Pink Fir Apple, which I can't resist), so that they will be harvested before blight becomes a serious threat, but with the Sarpo varieties available there are now some more options.
Posted by Mark Willis at 12:00