As far as my chillis are concerned, it's a race against time. Most of the plants are looking really healthy and strong now, but will they be able to ripen any fruit before the weather turns cold, that's the question. So far I have only picked ONE ripe chilli. It was a Cayenne. Here it is:

I only have one Cayenne plant, but it has loads of big fat fruits on it. I think they will definitely ripen before Autumn. Here's the plant just before I picked the fruit shown above. 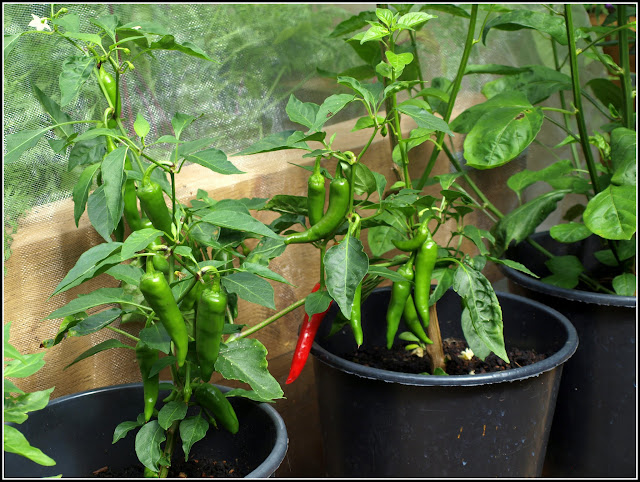 The other one that looks really promising is this one, which is an unknown variety. It came up in the pot in which I had sown seeds for Cheiro Roxa. 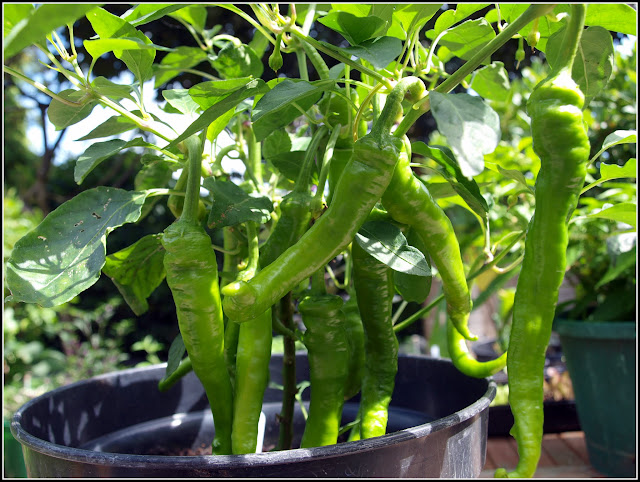 I think it may be one of the Turkish varieties I have grown in the past from seeds brought back from holidays in Turkey - probably a stray seed that got into my home-made compost. This year I sowed my first chillis in home-made compost (a reaction to my disgust with the weedkiller contaminated compost last year), but I think it was a mistake since I wasn't able to sterilise it, and lots of "volunteers" came up - hence the case of mistaken identity with Cheiro Roxa.

This one is the Brazilian Starfish, the one that lost almost all its leaves earlier in the year. It's doing really well now and has loads of fruit on it, though they are not (yet?) very starfish-shaped.


This is another plant that very nearly died back in the Spring. It is Hungarian Hot Wax. It is still a very small plant, but it has produced a number of very impressive fruits. I'm hoping these will eventually mature, because they should turn a lovely deep orange colour.


Here is "Indian Chilli Bullet", with its fruit growing in distinctive clusters at the top of the stems. A real "bunch of fives".

This one is Aji Limon. For various reasons I have 3 plants of this type, including one retained from last year. I know from experience that this variety matures very late, so I am not surprised to see no fruits with colour on them yet.


The two Nosferatu variants are a long way behind schedule. This one is only just flowering, and has no fruits yet. The flowers are very attractive though, don't you think?


As some of you may remember, the chilli I have nicknamed Nosferatu Green Leaf is the result of hybridisation between a regular Nosferatu and a Cayenne. Not only are the leaves greener, but the flowers are different too. They have white in them - like this:


So far the Nosferatu Green Leaf has only set one fruit. Here it is:

Likewise, there is only one fruit on the Rocoto, though there are plenty of flowers.


I have two Blondie plants, one grown from seed and one given to me as a small plant by my friend Stephen Shirley of Victoriana Nursery Gardens. Stephen doesn't rate this variety very highly, but I was determined to grow one, just for the variety of colour it gives. Most people think all chillis are red, but they are definitely wrong! Blondie will be a yellowish white - blonde, maybe?


The purple chillis are strongly represented in my garden this year. Here is Calico, with its beautiful variegated foliage and dark black fruits.


The fruits of Calico are a very strange shape - squat and blunt-nosed, with a very distinctive "slot". I think they look rather like Broad Beans!


Here is Bolivian Rainbow.  I was hoping for a much bigger plant, but this is another one that nearly succumbed to aphid attack, so I'm actually pleased to have anything at all.


The fruits of Bolivian Rainbow are currently all purple, but as they mature they will turn colour and go through various shades of yellow, orange and red.


This is the Birds Eye plant, one of those saved from last year. To be honest, I don't really know why I am persevering with this one. For the "challenge" I suppose. Despite my efforts, it still looks sickly an unenthusiastic. It has produced a lot of small greenish-white flowers, but no fruits so far. Many of the leaves look pale and blotchy, as if the plant were undernourished, even though I have been feeding it regularly, first with Chilli Focus and after that ran out with Tomorite tomato-food.


The Puma plant is another that will probably not produce ripe fruit. To say that it has languished would be putting it mildly.


Many of Puma's leaves look like this. I would normally say that looks like wind-burn, but then why would this one have been damaged when the others haven't?


Sitting next to the Puma is this Caribbean Antillais. This is a Capsicum Chinense type (similar to Scotch Bonnet). The plant is looking really good, and covered with masses of flowers, but so far it has only set about half a dozen fruit and those are still tiny. They probably won't ripen before Autumn.

The same applies to this Jay's Peach, which is a shame because I had been looking forward to seeing some peach-coloured fruit!

Likewise this Habanero Orange. If I had a plant like that in May or June I'd be well pleased, but it may be too late for this year. The Capsicum Chinense varieties, (like this one, Puma, Caribbean Antillais and Habanero), definitely take longer to mature. They would do better in a greenhouse, I'm sure. Fortunately I have another one of this variety, a smaller one, which is earmarked for possible over-Wintering indoors.

Over-Wintering chillis is a specialist skill area which I am only just beginning to explore, and I have already discovered that it is a very uncertain business. A 50% survival rate seems to be considered good. Anyway, it's too early to be worrying about over-Wintering, isn't it? Or is it? Our weather this Summer has been appallingly bad and Winter doesn't seem far away. If we could just have another 5 or 6 weeks of half-decent weather I might end up with fair few ripe chillis. I live in hope rather than expectation!
Posted by Mark Willis at 12:00