I have been foraging... 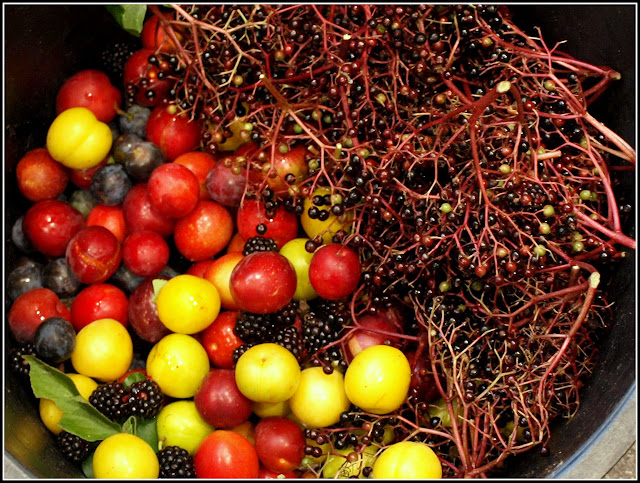 At this time of year the hedgerows are full of fruit. Over the last couple of years I have become interested in jam-making, so I usually go out and get enough fruit to make a few jars of Hedgerow Jelly. My version of this includes whatever fruit I can find, but usually Sloes, Blackberries, Elderberries, Plums and Apples.

Last year I went a bit overboard with the plums - I picked about 12kgs - so this year I told myself to be a bit more sensible. I'm still eating the jam I made this time last year! Actually, it is just as well that I didn't want many plums, because this year's plum crop has not been as bountiful, and I would certainly not have been able to pick 12kgs this time in the place where I go.

The Blackberries are late this year, presumably because of the weird weather we have had, so I was only able to get a few of them. 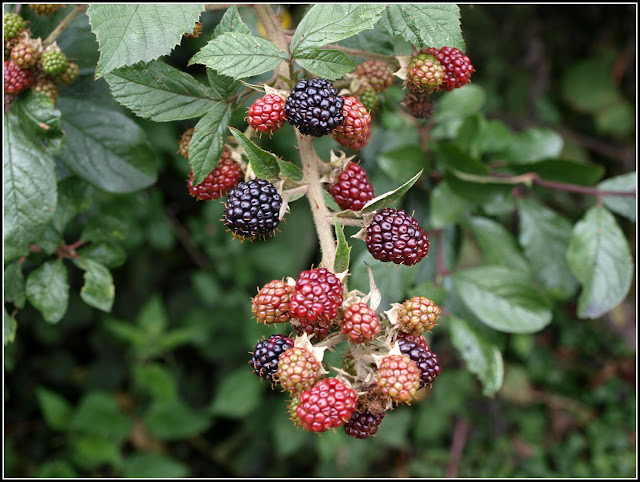 The Elderberries, likewise, are later and smaller. 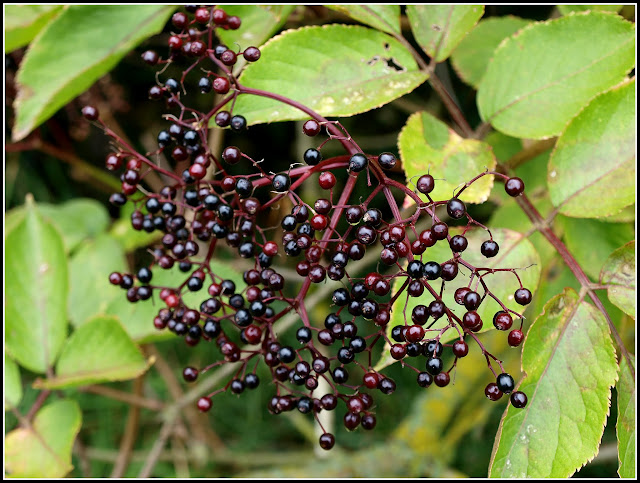 However the Sloes are massive, and abundant. 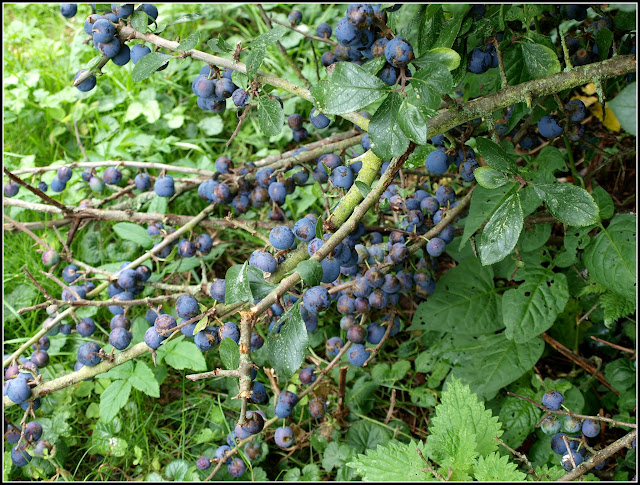 Some of them are nearly as big as the plums! 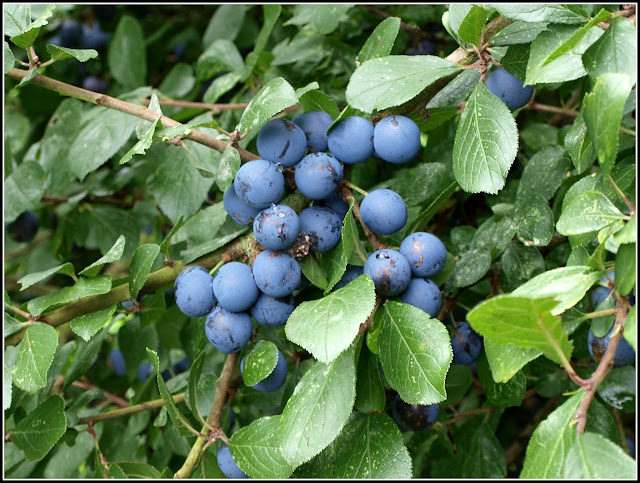 Anyway, I collected in the space of about half an hour a huge bucketful of fruit. I didn't weigh it, but I think it must have been about 3 or 3.5kgs. 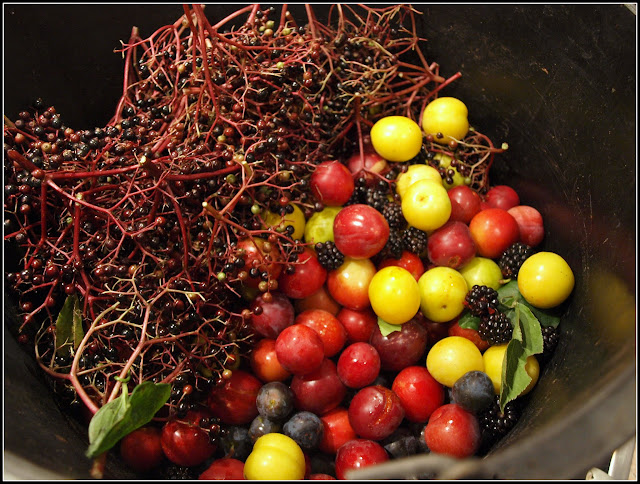 After washing, about two thirds of the fruit went straight into the Preserving Pan to make juice for my jelly. I added two cooking-apples from the fridge. 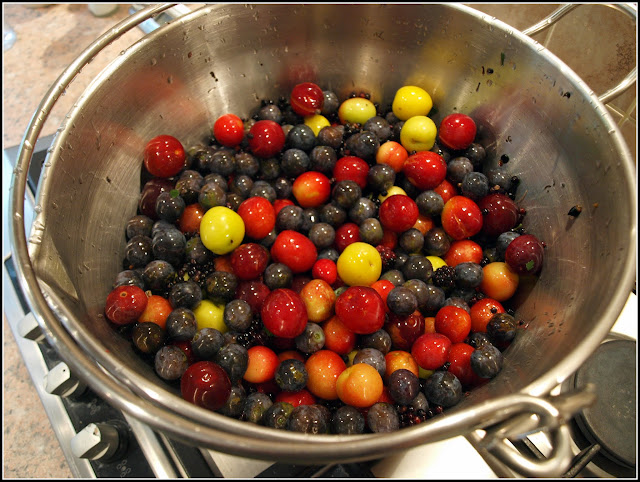 After simmering for about a quarter of an hour all the fruit had fallen, making a soft pulp, which was then strained through a muslin bag. Tomorrow I will cook it up with sugar and make my jelly.

I kept back 1.2kgs of Sloes, which are now in a bag in the freezer. I'm going to use them for making Sloe Gin. They say that the flavour of Sloes is best after they have been exposed to some frost, and putting them in the freezer mimics this. In the past I have found that if I leave picking the Sloes until after the first frost there are none left because everyone else has picked them.

As well as the fruit, I came home with a load of Horseradish roots which I dug up from the verge in the country lane just near where I picked the plums. 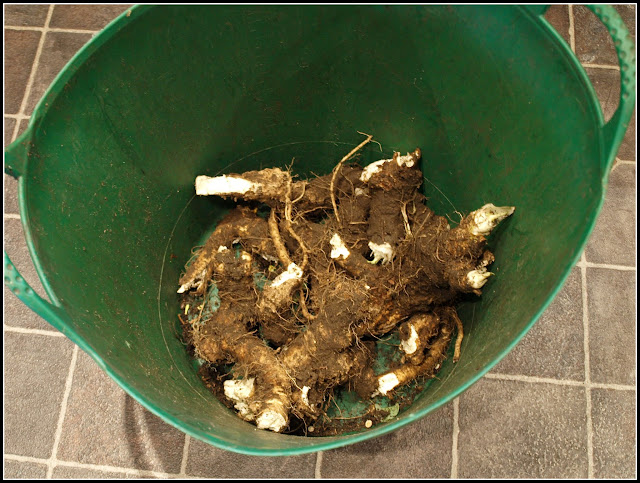 They don't look very appetising, but Jane likes Horseradish and she assures me that when this lot is peeled and grated it will be lovely! She is planning to preserve some of it for later use in a jar of vinegar. Sounds horrible to me...
Posted by Mark Willis at 12:00