Despite problems with contaminated compost, Blossom End Rot and lack of sunshine, my tomatoes are finally producing some ripe fruit.  The little Maskotka ones were the first to ripen, and have fully justified their status as my favourite variety. Their fruit is very tasty and their skins are very thin, making them ideal for use as a snacking tomato. 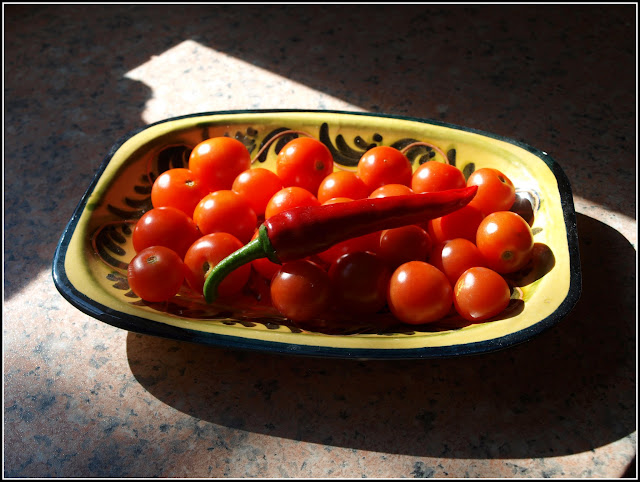 The smaller, so-called Cherry varieties have been the earliest to ripen. "Primabella", one of the new blight-resistant varieties, produced ripe fruit at the same time as "Maskotka". However, I'm afraid it doesn't meet the high standards of "Maskotka" - not as tasty, and the skins are tougher.


This is the well-known variety "Gardener's Delight", which produces some very big trusses of fruit. So far only one or two fruits have ripened, and the upper trusses have a long way to go to reach maturity.

Lots of the yellow-fruited "Clou" have ripened too. They are about the same size as "Maskotka", maybe just slightly bigger. Mostly they were picked by my Garden Helpers while we were away on holiday, so I don't have many photos of ripe ones, but you can see some here: 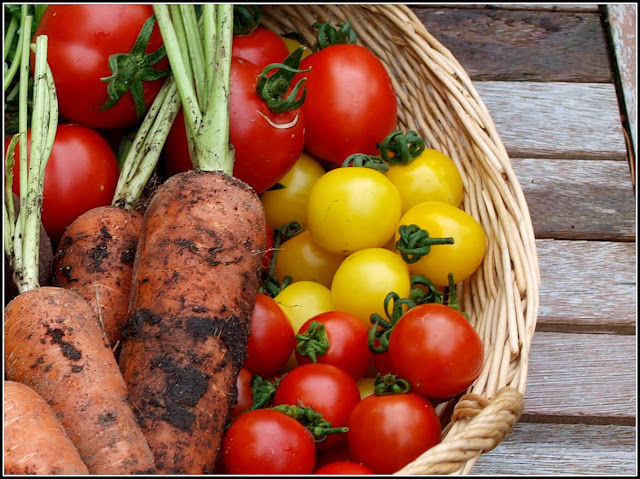 The taste of "Clou" is fine, but the skins are unpleasantly tough. Jane made most of them into a sauce, which involved removing the skins, and they were fine that way. I don't think I will be growing this variety again.

This is another variety I have come to love - "Ferline". It was one of the first blight-resistant varieties to be developed. Naturally, this is a big advantage, but "Ferline" also scores heavily on taste and size of yield. The fruits are very regular too. 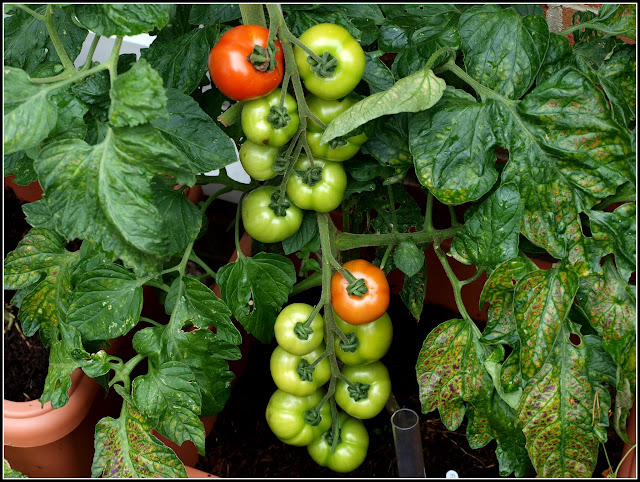 This is "Possena del Vesuvio". It has produced plenty of fruit, but several of them have been unuseable because of BER and another sort of rot which I don't know, which results in the fruit going soft and soggy. Look carefully at the red one towards the top of the photo. You may be able to see that it has a sort of "tide-mark", because the lower half was mushy. These two big beauties are "Ananas", which will eventually be orange-coloured. 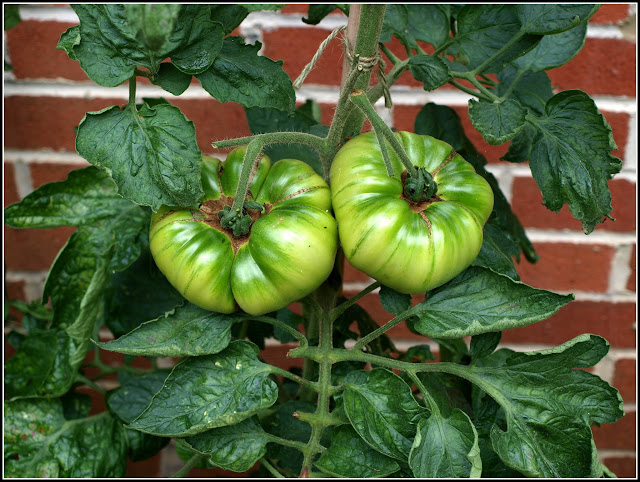 This dense cluster is "Black from Tula". No sign of ripening yet. 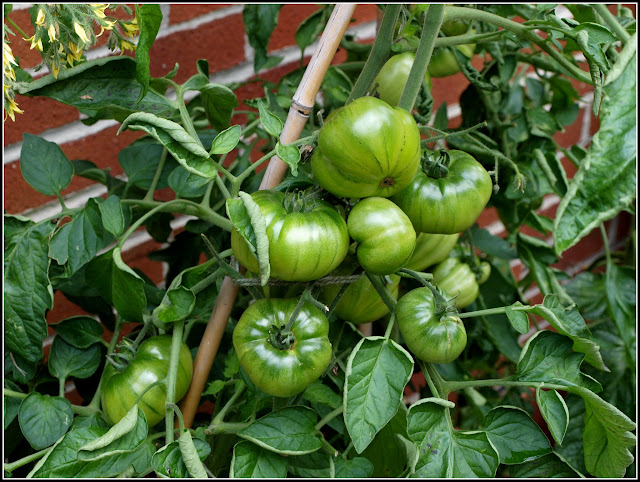 This one takes the prize for Ugliest Fruit: It is a "Cherokee Purple". The weirdly-shaped fruit has grown between the plant's stem and its supporting cane. 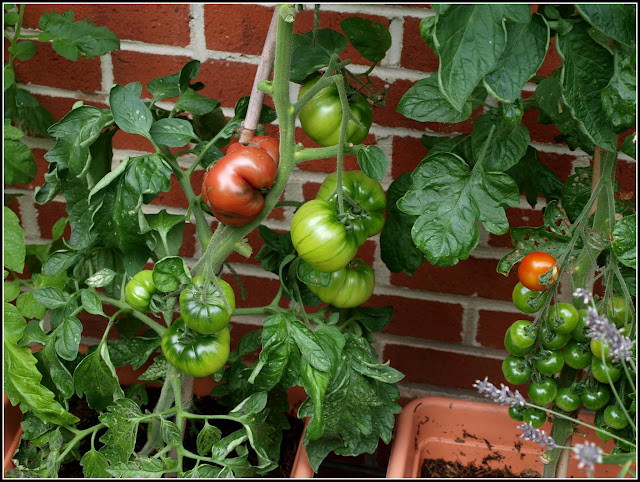 This next one is "Harbinger". So far it seems unremarkable. None of its fruits has ripened yet - though this is hardly surprising since it has one of the least-desirable sites, partially shaded by the water-butt. 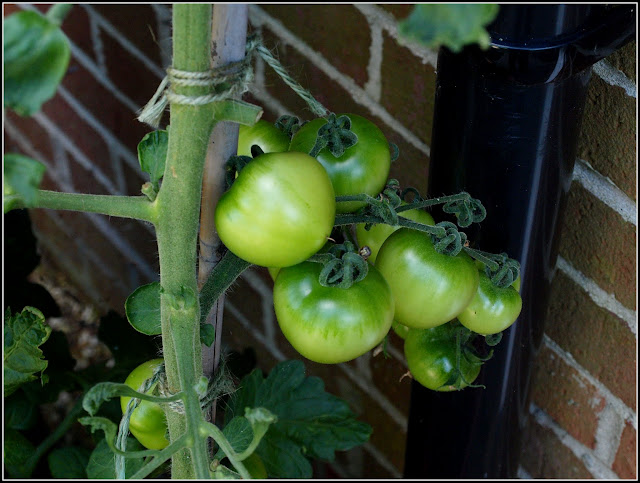 Here is "Giant Syrian". I tried growing this one last year, but none of the fruits survived the compost-contamination. The shape of the fruits is surprisingly variable - some long, some short. The one which is nearly ripe is sort of heart-shaped. 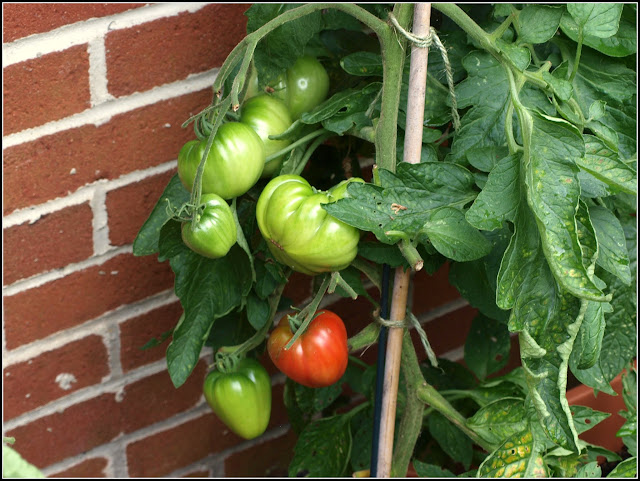 This is "Crimson Crush". It's another allegedly blight-resistant variety. I'm really looking forward to having some ripe ones, because their breeder claims that their taste is on a par with "Sungold" and "Brandywine", which are both hard to beat. 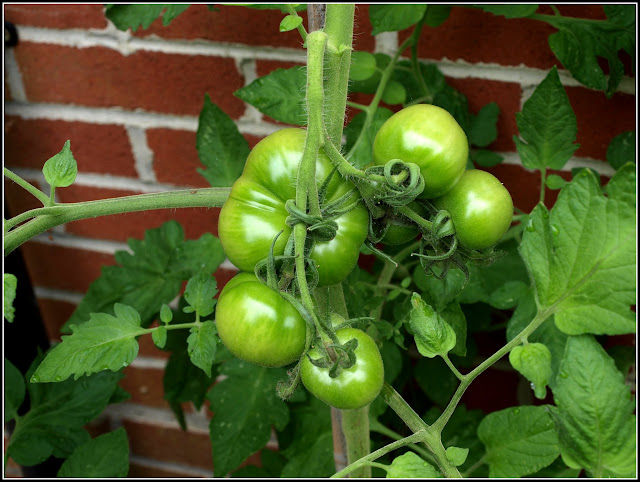 This is "Orkado", a variety quite similar to "Ferline", though I don't think it has the same blight-resistant qualities. 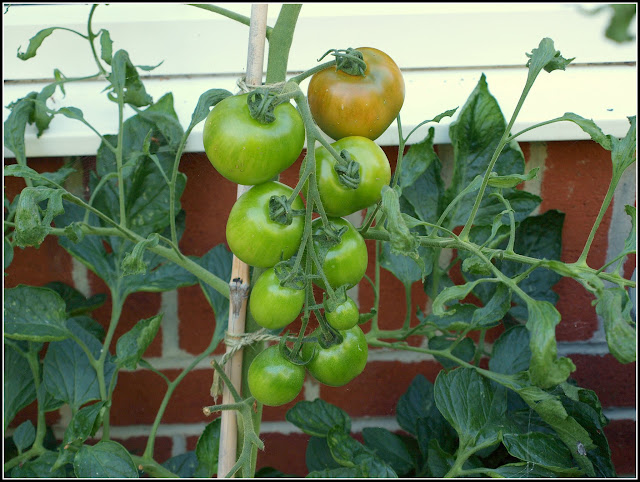 This one will be pink when it's ripe. It is "Larisa". 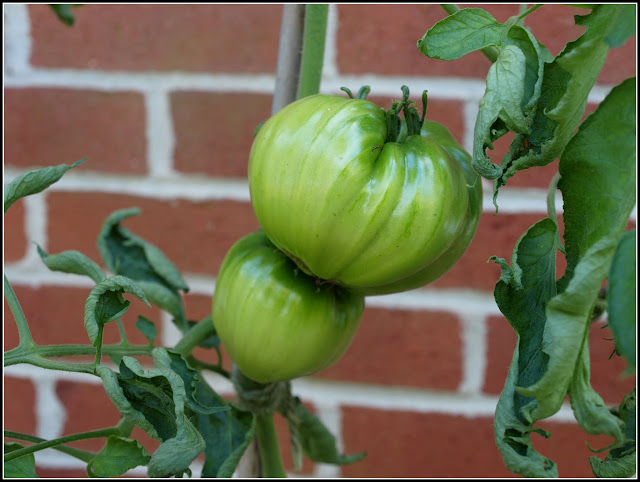 This very pale one is "Giant Delicious". Hopefully it will be nice and red when it's ripe! 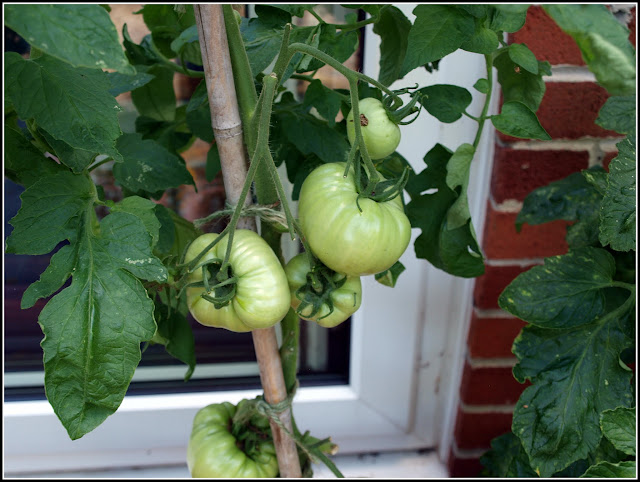 So far I have only harvested a few ripe fruit, but it looks as if there will be a decent number to follow. I'm certainly in a better position than this time last year. I even hope to have enough to be able to make some tomato sauce - which we both love. 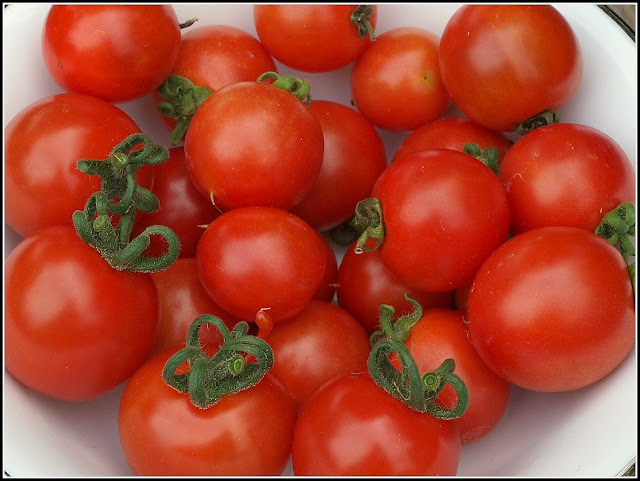