Some of my readers may be aware of the battle being waged between the plotholders of Farm Terrace Allotments and Watford Borough Council. If you are an allotment-holder yourself, planning to be one, or even just interested in the subject, you should make yourself aware of the issue. 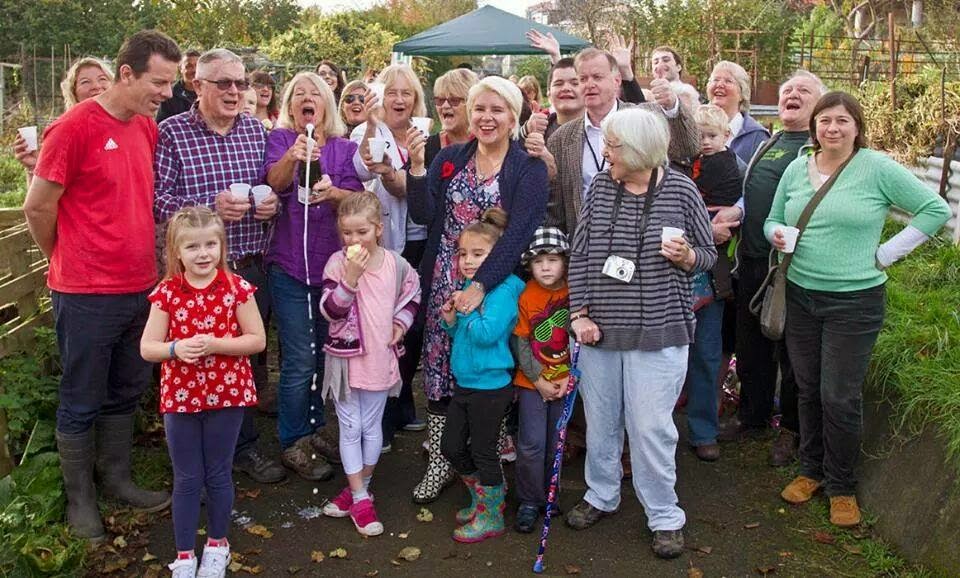 An allotment is basically a small piece of land rented-out to ("allotted" to) a tenant who needs space for growing fruit and vegetables (and maybe some flowers) for domestic consumption. The land is normally owned by a local Council, although some of them are privately owned.  The idea has always been that land should be provided at a very low rent in order to promote self-sufficiency. Most allotments forbid the commercial selling of produce. If you are not familiar with the concept and its history, there is a very succinct summary HERE.

Over the generations, allotments have developed from being entirely a means of producing food to being a sort of social club too. Allotment societies are well-known for the enthusiastic interactions between plot-holders - normally good-natured attempts to out-do each other in quantity and quality of veg-production, but occasionally leading to heated disputes over interpretation of rules! Some allotment-holders have been gardening on the same site for decades; some might even have inherited their plots from an earlier generation of their family. Having put years of hard work (and copious amounts of compost, fertiliser and manure) into their plots, many people get very attached to them

The problem is though that they don't OWN the land, they only rent it. This means that the owner of the land can in certain circumstances evict the tenants or simply just not allow them to renew their rental agreements. Currently, statutory (publically-owned) allotments cannot be sold-off or converted to other use without Ministerial consent (currently the Secretary of State for Communities and Local Government). Unfortunately many requests have been made in recent years for such sell-offs, and most of them have been granted. A perception has arisen that a Council only has to ask for such permission and it will almost certainly be granted, without too many questions being asked. For instance, of the 199 applications to close allotment sites submitted between 2007 and 2013 the government only turned down 4.

Most Allotment Societies and groups of allotment-holders have been unable to resist the forced closure of their sites (often justified by offers of re-location to alternative sites that may be more distant and thus harder to access, especially if you are not very mobile or cannot afford a car). However, one group has put up a very spirited resistance. It is a group of tenants of Farm Terrace Allotments, who are valiantly contesting the proposed closure of their site by Watford Borough Council, which wants to re-possess the site and (allegedly) build on it. The council's apparently ill-defined plans are perceived by many local residents as being motivated purely by the potential profit to be made from selling the land - which may or may not be used for building houses, extending a nearby hospital, or making a car-park for the adjacent football stadium. The council on the other hand asserts that the land is urgently required for building new houses etc.

Now I'm not a Watford resident, and have no personal interest in the case, but it has attracted my attention because it seems to me to epitomise many of the problems facing our society today. Central Government provides less and less money to cash-strapped local councils, who are still obliged to deliver services to their citizens, so it is hardly any wonder that the councils seek any way possible to raise funds. But at the same time Government is urging people to adopt a better lifestyle, in which fitness, fresh air and good diet play a major role, and allotments have a big contribution to make here. Perhaps some people under-estimate the physical, social, psychological and therapeutic benefits of gardening as a hobby?

We also have to consider what happens when a piece of land (such as an allotment site) is sold by a council. Who gets the money, and what is it used for? Will it genuinely be ploughed-back into the public services that the council is obliged to deliver? That is something that the ordinary member of the Public will probably never know, but there is always a faint suspicion that not all of the profits will end up in the right place. And in any case, the ultimate beneficiary of the sale will almost certainly be a Developer who will build a lot of houses on the site at minimum cost and sell them for a huge fortune!

Watford Borough Council seems absolutely determined to sell the Farm Terrace allotment site and displace the tenants. They have so far submitted THREE requests to the Secretary of State (Eric Pickles) to allow them to "de-regulate" the allotment site. There was elation in the allotment group when the second application (having been approved by Mr.Pickles) was overturned by a High Court ruling last October, only to be followed by dismay when the council submitted yet another bid in January. I ask you: when is a decision a real, final decision? Will the council just keep on re-submitting its bids in the hope of eventually wearing-down its opponents and exhausting their financial resources?


I note meanwhile that the council closed the waiting-list for new tenancies at this allotment site in 2012, (when there is a national shortage of allotment sites and big demand for them, often resulting in waiting-lists stretching ahead many years) yet at the same time they cited as part of their argument that there was no demand for plots at the site! Maybe these two things are connected...

One of the most enthusiastic members of the allotment-holders' group is Sarah-Jane Trebar, [Twitter: @SaraJaneTrebar] who has recently organised a petition to the Secretary of State, via Change.org, http://change.org/SaveOurAllotments which rapidly attracted many thousands of signatories. This is an issue that has evidently struck a chord with a wide audience.


We currently await the outcome of the council's third submission. A decision is expected before the end of March. Let's hope the council's request is rejected once more and that Farm Terrace Allotments live on!

In the meantime, Sara-Jane and her colleagues are lobbying hard to raise public interest in the subject of strengthening legislation to protect allotment-holders' rights. Right now they appear to have very few such rights!

If you want to know more about this issue, here are some places where you could start: