Having just acquired my seed potato tubers, I have started thinking about how I will protect my potatoes when they are planted in a few weeks' time. Our weather here in the UK is notoriously unpredictable (more so than ever in recent years, I feel) and during the Spring there is a strong risk of frost and/or heavy rain that will damage or destroy tender young growth on potato plants. Covering them with horticultural fleece is a cheap option but not necessarily the best one, since fleece is easily damaged (especially by cats and foxes) and when it gets wet it sags onto the plants it is meant to be protecting. The last thing a young potato plant wants is to be covered by a piece of frozen waterlogged fleece! Seen here is damage to fleece covering a raised bed, caused by nocturnal animals - foxes maybe. 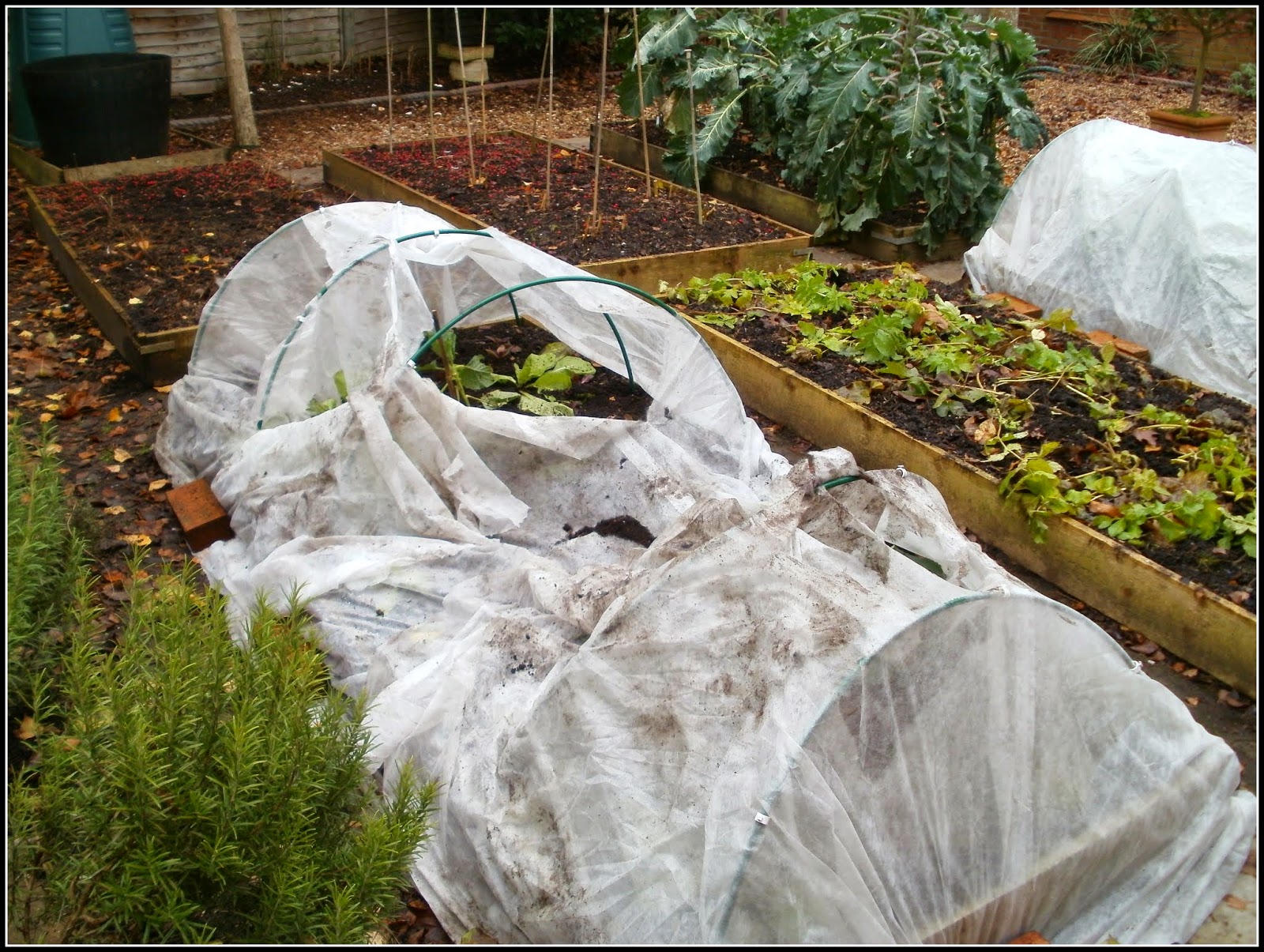 This is my answer: the "Kingfisher Seedling Greenhouse".


This thing is probably intended to protect trays of young seedlings, but I use it to hold my pots of potatoes, and later in the year, chillis. It comfortably hold 9 of the pots I use. 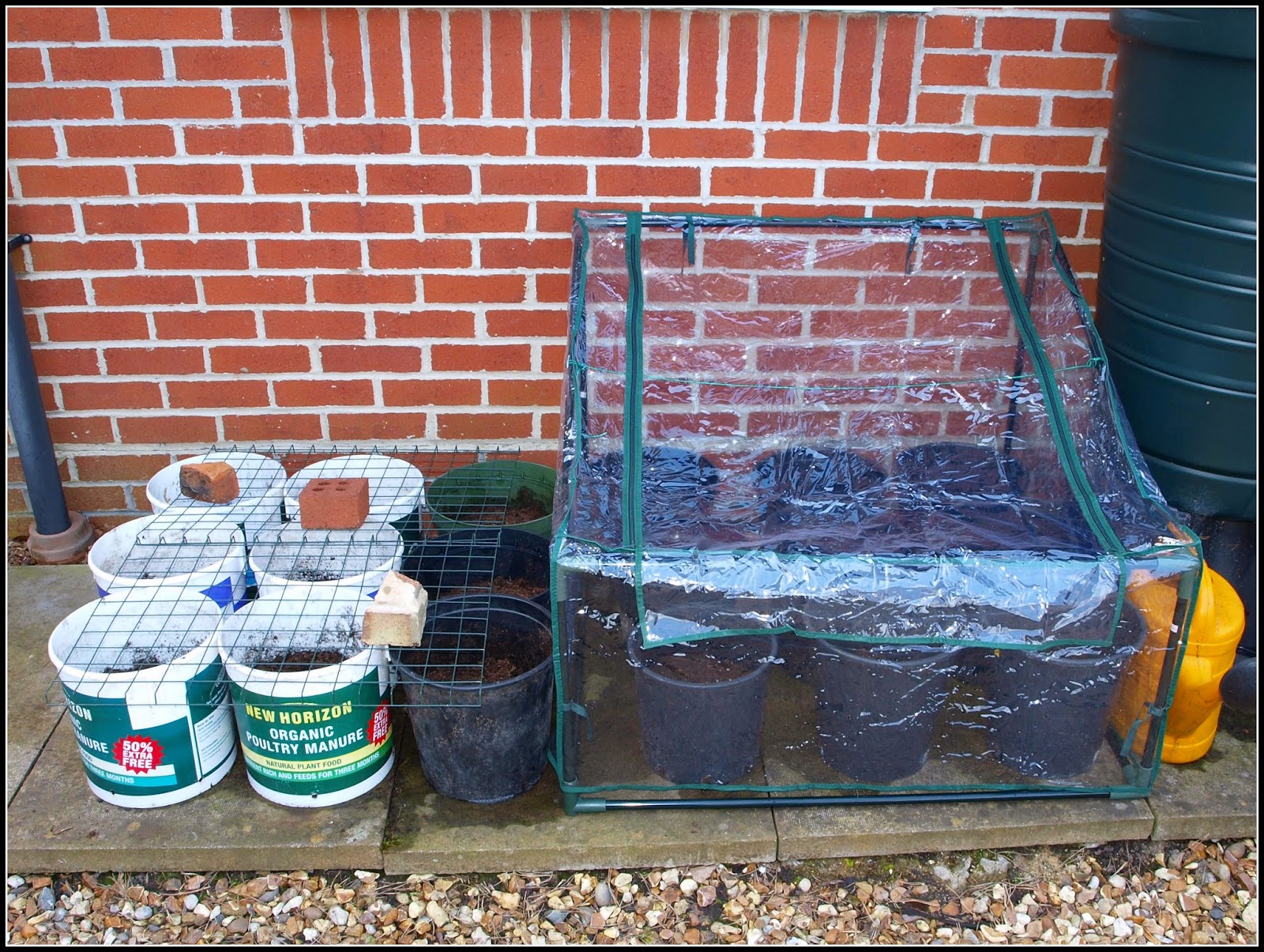 The pots "left out in the cold" are covered with the wire shelves which are supplied with the Mini Greenhouses. Held in place with bricks like that they are a minor deterrent to opportunistic browsers of the vulpine sort! That photo was taken on 28th March.

Here are the same potatoes on 7th May. 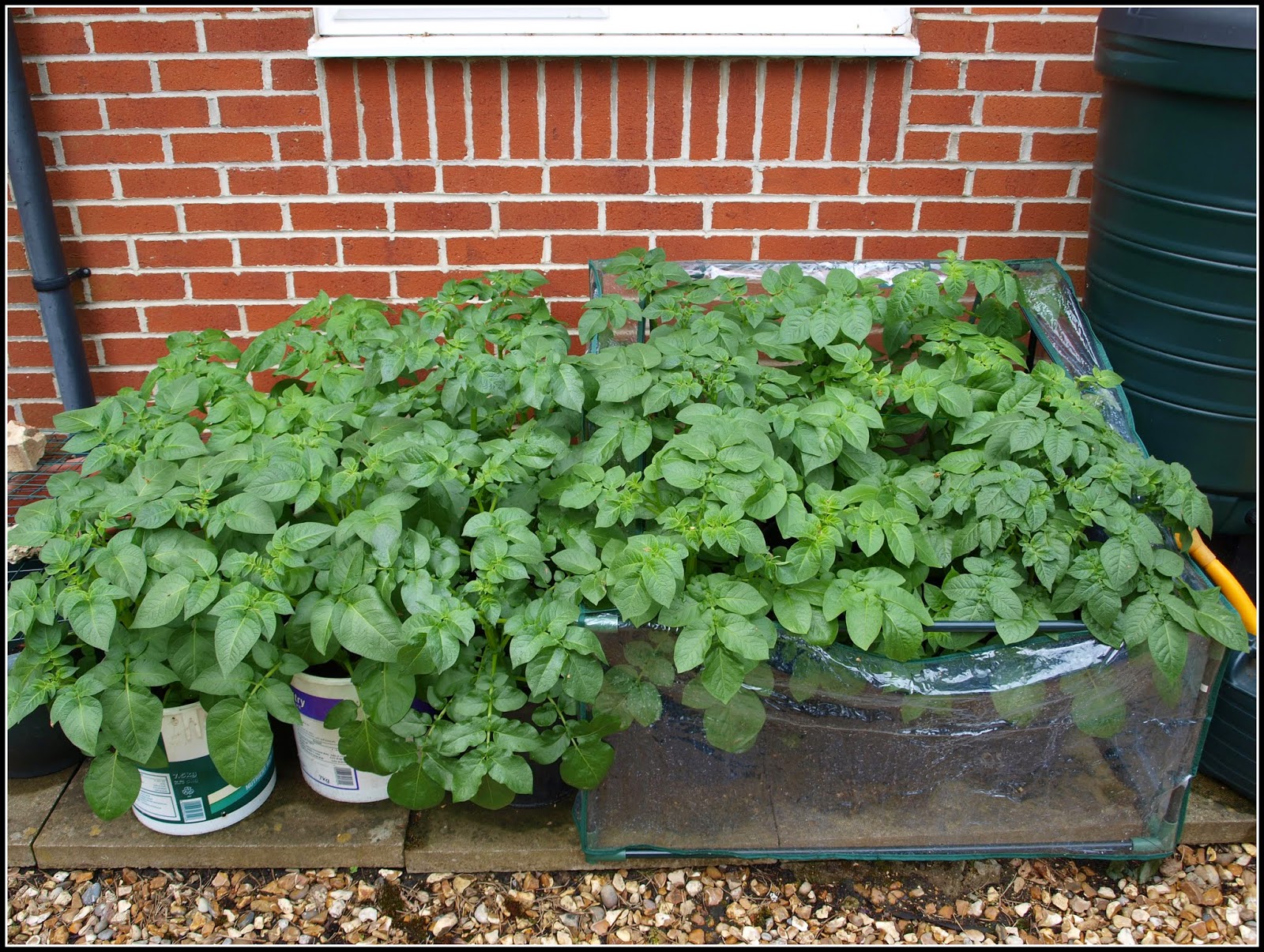 The potatoes in the Seedling Greenhouse are perhaps marginally bigger than the ones that didn't benefit from any protection, but that's not necessarily a good guide because they are of several different varieties. Anyway, this year I am taking no chances - I have just ordered two of the Seedling Greenhouses (£14.99 each).

The one you see pictured above finally died last Autumn and was thrown away. Its plastic had gone brittle and cracked in many places, but I think it had done quite well because looking back through my photos I see that I certainly had this thing in Spring 2011 and I probably acquired it in 2010 or earlier. I started my blog in August 2010 so I don't have any evidence of what occurred before that time!

The greenhouses in question are not as widely available as I had expected and I had to search around a bit (I eventually ordered mine through Amazon, though I would preferred not to have done). Perhaps they are not as popular as the upright greenhouse type? They suit my purposes very well though. They are easily assembled and dismantled (no tools required). Their only significant disadvantage is that they are very lightweight and can easily blow away if left outside without anything in them. I sometimes use bricks in the corners to weight them down.

Another disadvantage is that when the lid is zipped shut it sags in the middle, and thus tends to collect rainwater. I have tried to alleviate this by stretching a cord across the middle to provide some support (see photo below). This has been only partially successful. 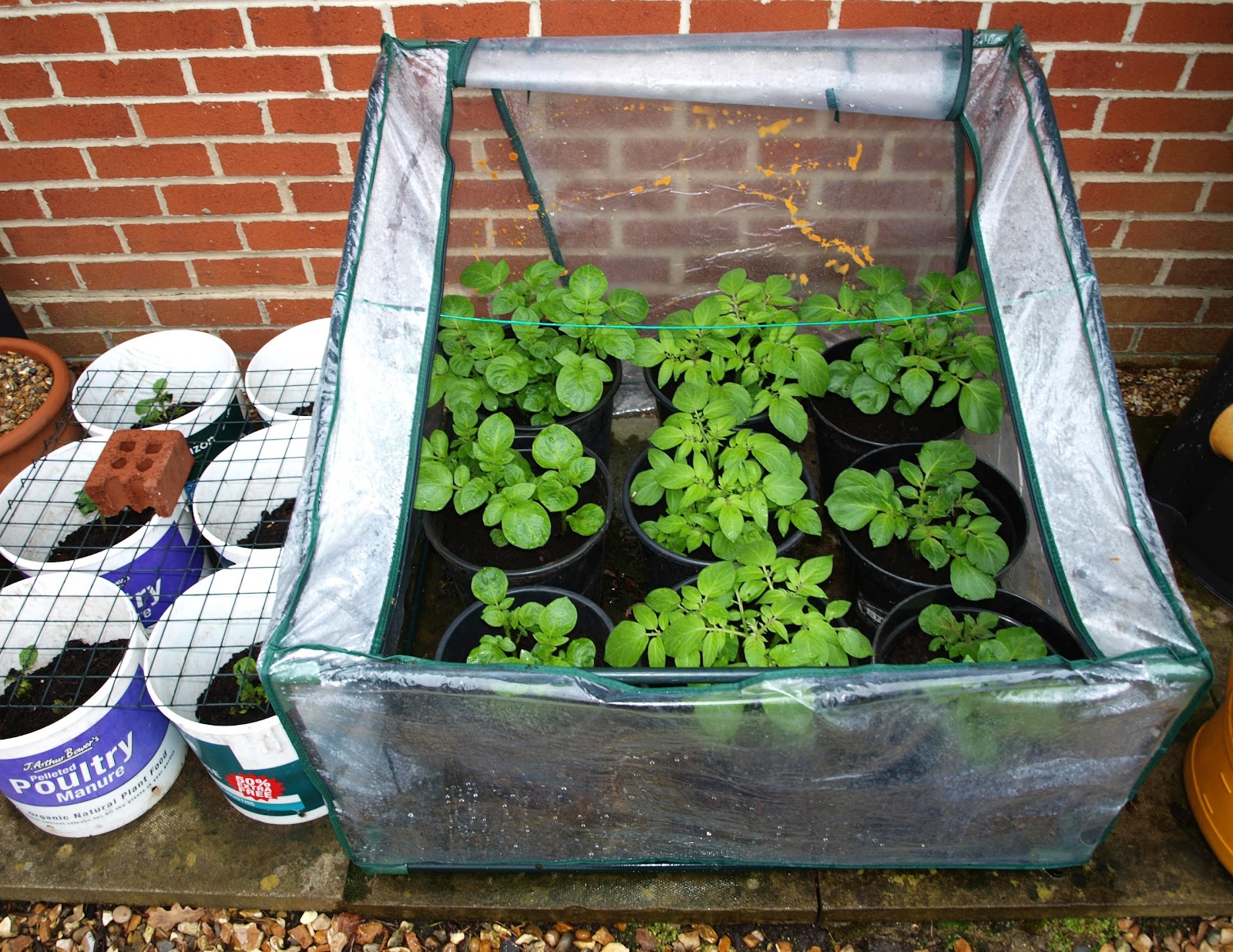 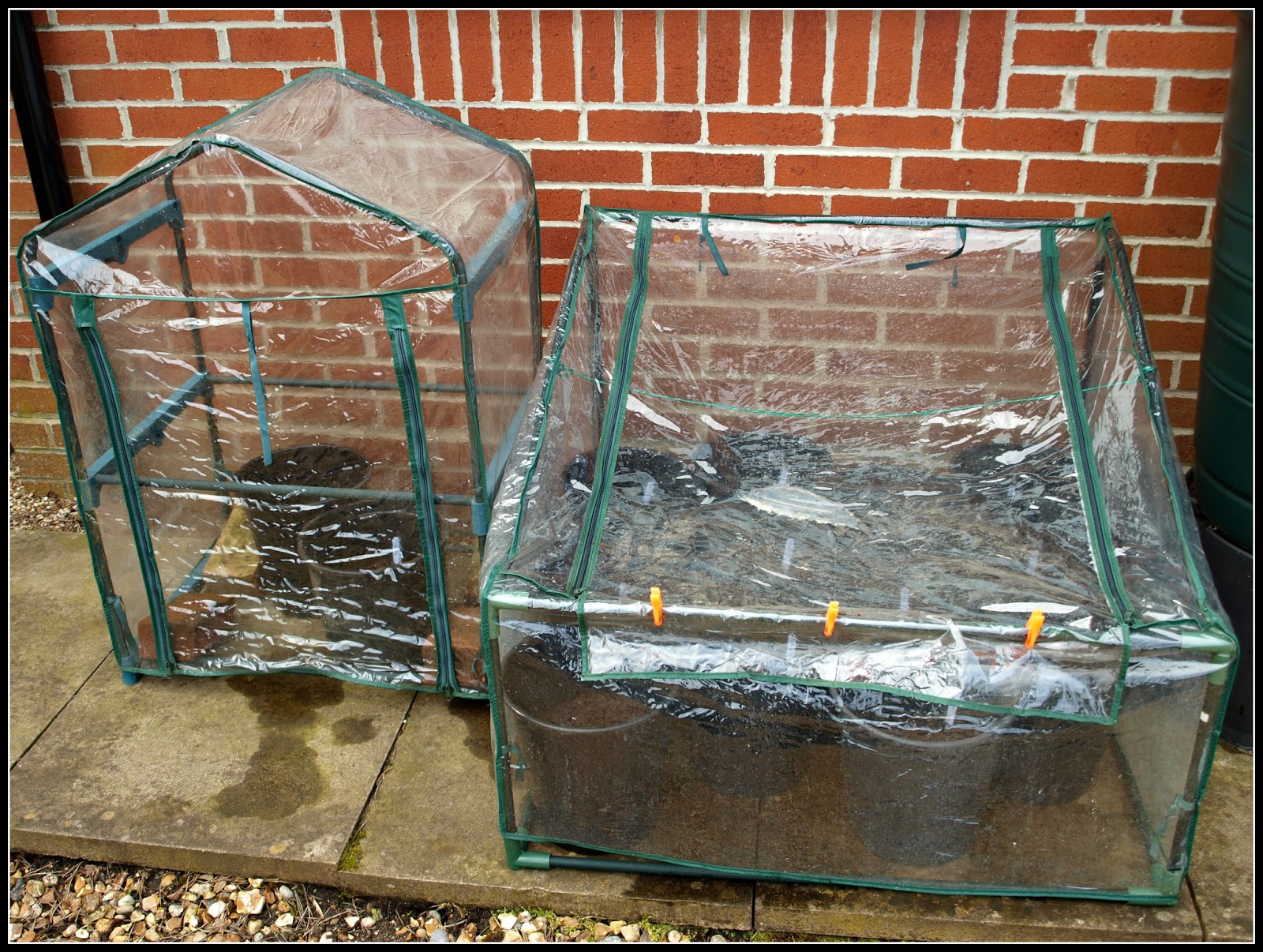 I think with the new ones I may be tempted just to make a hole in the middle and ensure that it is not directly over one of the plants! Perhaps put a bucket under the hole and use this as a means of collecting the rainwater?

Anyway, my potato-protection plan is made. Do you grow potatoes in containers, and if so, what do you do to protect them?
Posted by Mark Willis at 12:00