The other day I wrote about our visit to Laverstoke Park Farm shop. This is a follow-up to that.

You may recall that I wrote about our less-than-enthusiastic response to the grey and unexciting bacon. At the time I didn't see fit to mention that we had experienced a few issues, which I was then in the process of following up, but since theses issues have not been resolved, and in fact have got worse, I feel it necessary to air my frustrations here! [P.S. we do now have a resolution, but that's not going to stop me telling the story.]

When we bought the bacon, it (and the other packs on display) were incorrectly priced. They showed the price as £0.00. I jokingly said to the sales assistant who was serving us "I'll have some of the FREE bacon please". He then weighed the bacon and added it to our other purchases. It was only when we got home that it dawned on us that he had weighed the bacon complete with its packaging. Since the price of this allegedly extra-special bacon was £24.95 per kilo (!) this meant that we had paid an extra 54p for the packaging. 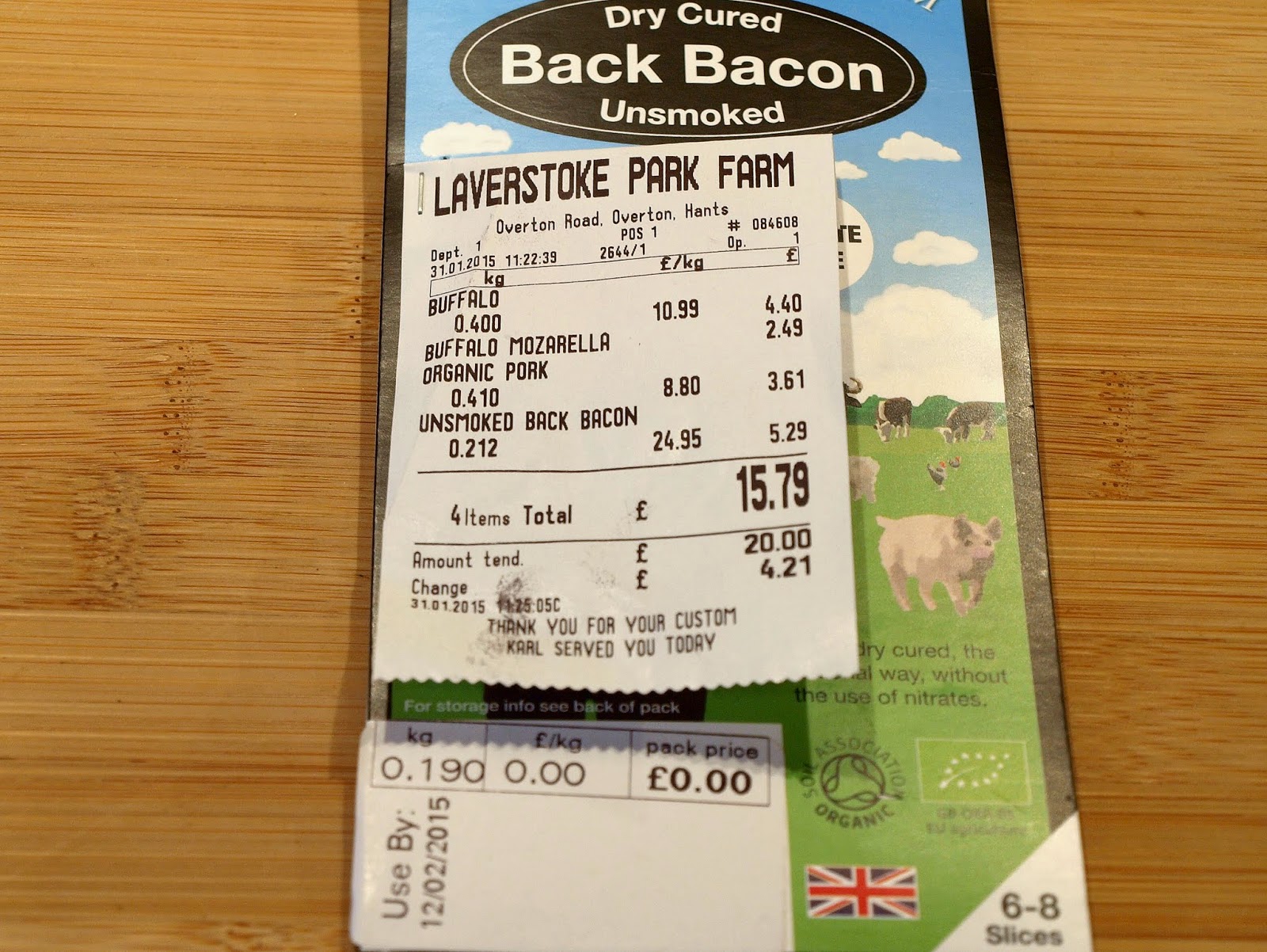 I sent in a message to Laverstoke Park Farm via the Contact page on their website. This was on Saturday afternoon.

By Tuesday evening I had received no response so I Tweeted them. Jane also explored their Facebook page, but since it hadn't been updated for a month, decided it wasn't worth leaving them a message there.

Meanwhile, we had been planning to use one of our other purchases, some pork sausages, for a nice mid-week meal of "Bangers and Mash" on Wednesday. The Use By date for the sausages was 05 02 2015, so they should have been OK.  Curiously, they were also labelled Chipolatas, which they definitely were not. I wonder whether sausages and chipolatas are the same price? 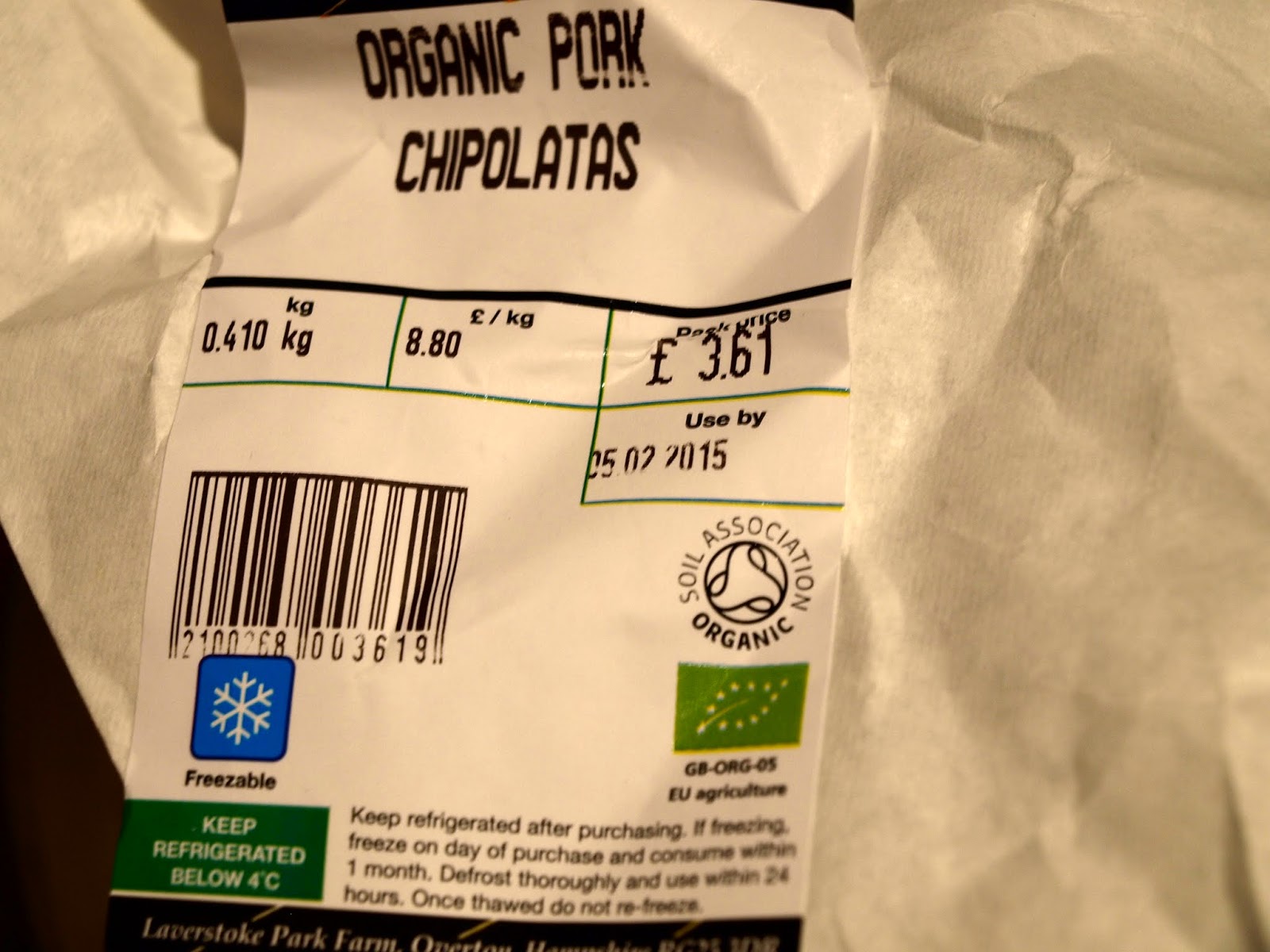 On Tuesday evening I remarked to Jane that there was a very strong smell in our fridge. We both concluded that this was just the very meaty smell of high-quality sausages. We were wrong. When we unwrapped them they well undoubtedly "off" - disgustingly rank and smelly, not to mention a very strange colour: 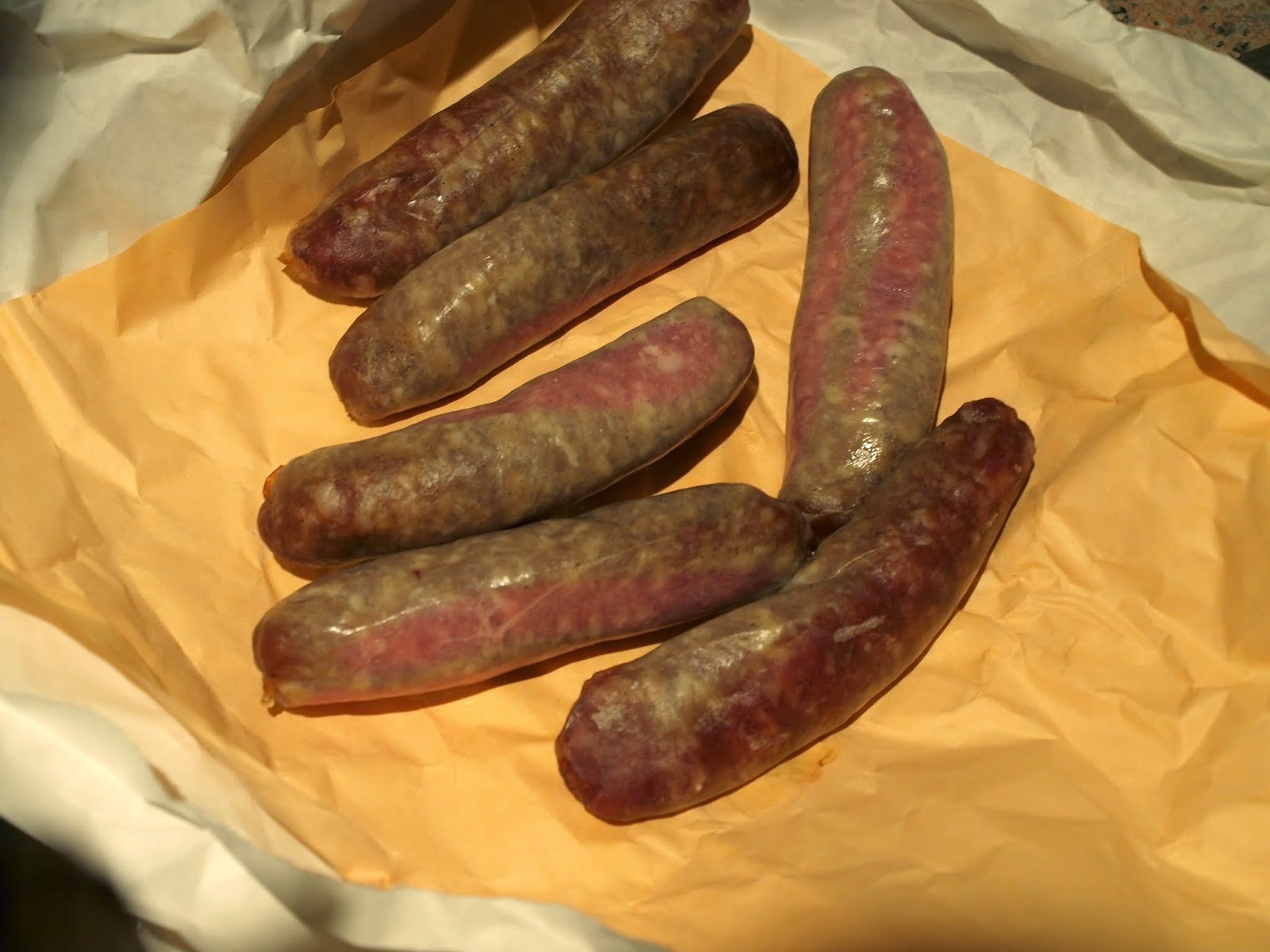 Oh Boy, if only you could smell them yourselves!! There was no way we were going to eat those!

Anyway, with frustration levels now rising severely, and with a day off work, I telephoned Customer Services. Surprisingly, my call was answered promptly. After a significant pause (I'll just check on the system...") they admitted they had had my email, but said it was being dealt with. Of this I had no evidence... It was agreed that they would check the situation and call me back.

Surprise, surprise! 3 minutes later I receive an email saying "Your query is being dealt with." Later I had a proper conversation with the Customer Services Manager, explaining all the issues. Her opening gambit was of course to assert that this was a most unusual situation and to offer me a free replacement next time I visited the shop. Having turned this down on the grounds that I didn't really want to travel 20 miles each way to get another pack of something I didn't enjoy in the first place I eventually agreed to a refund of the cost of both bacon and sausages. In retrospect I think maybe I should have held out for something more. Maybe a refund plus a £5 voucher or something? This might have tempted me to visit the shop again, but now I think that is highly unlikely.

Anyway, in the spirit of fairness, I also wish to report that we ate the buffalo mince in a Cottage Pie, and very nice it was too. As far as taste goes, we could not see any difference between it and beef, but the texture was lovely and smooth, without any of the grittiness you sometimes get in beef mince. Jane made the pie, and wrote about on her blog, HERE.

The Mozzarella cheese has yet to experience its moment in the spotlight. Its Use By date is 12 Feb, so wish me luck... 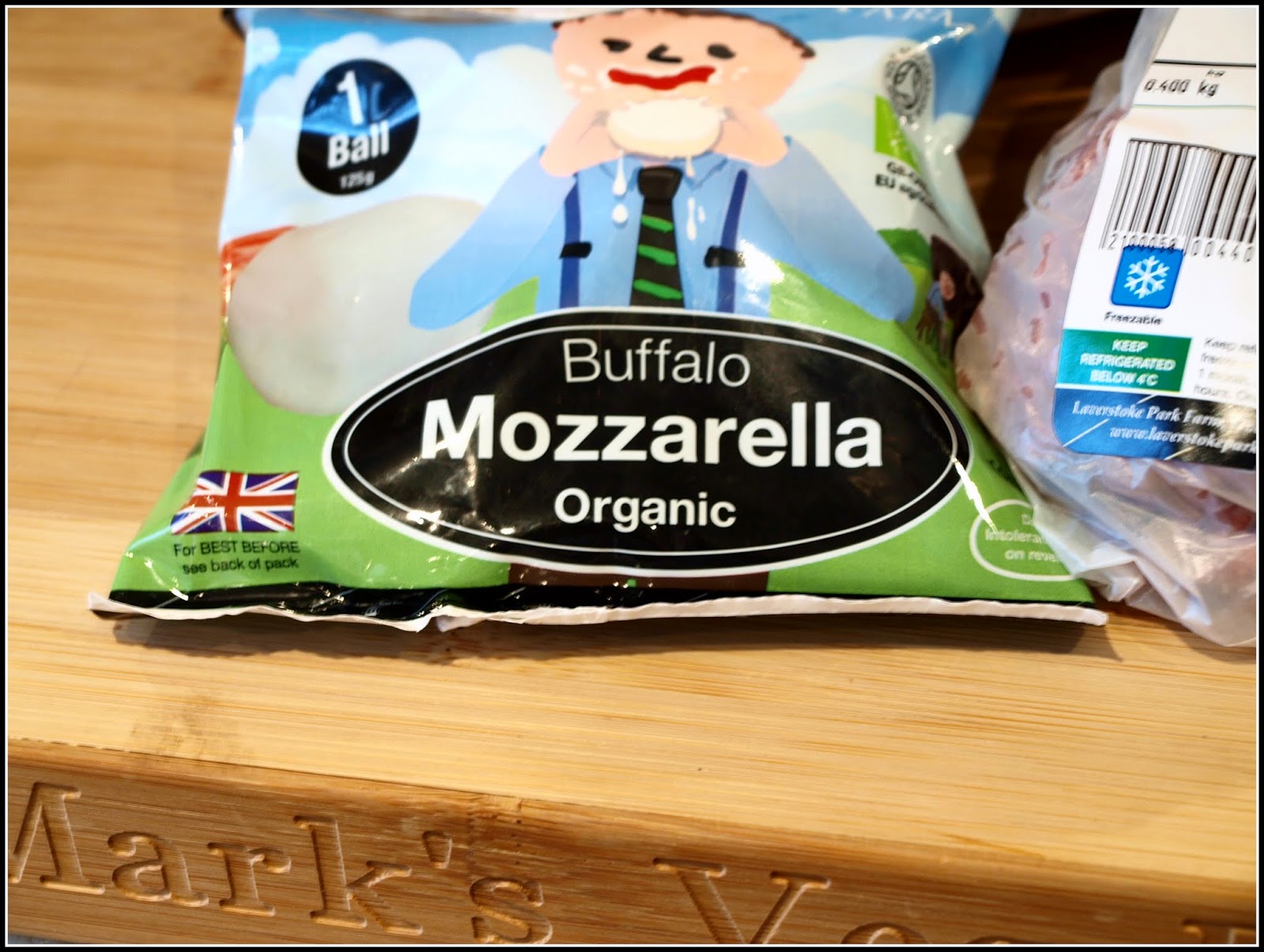 It is especially disappointing that Laverstoke Park Farm and its produce has turned out to be not as good as expected, because we have been wanting to visit it for ages. This time last year we nearly went there, but were prevented from doing so by flooding on the roads!