Many readers will know that the town in which I live, Fleet, straddles the Basingstoke Canal. It's not a big or well-known canal, but it provides a lot of enjoyment for people who live near it. Joggers, Cyclists and dog-walkers all make good use of the towpath. I like it because it is a good source of photos! When the weather conditions allow, I'm often out peering closely at the flora and fauna beside the canal, to the evident amusement of other passers-by who must sometimes wonder what on earth I'm up to.

Saturday was a beautiful sunny day, and Jane was up in London attending a club meeting, so I took the opportunity to head out to the canal. The conditions could hardly have been better for me - bright sunshine and blue skies, and although it was chilly there was hardly a breath of wind. I took the car and drove out of town to a place where I knew there would be fewer people and more wildlife. I started my walk at the Barley Mow bridge in Dogmersfield (named after a pub just opposite). A plaque tells us that it was built in C1792. 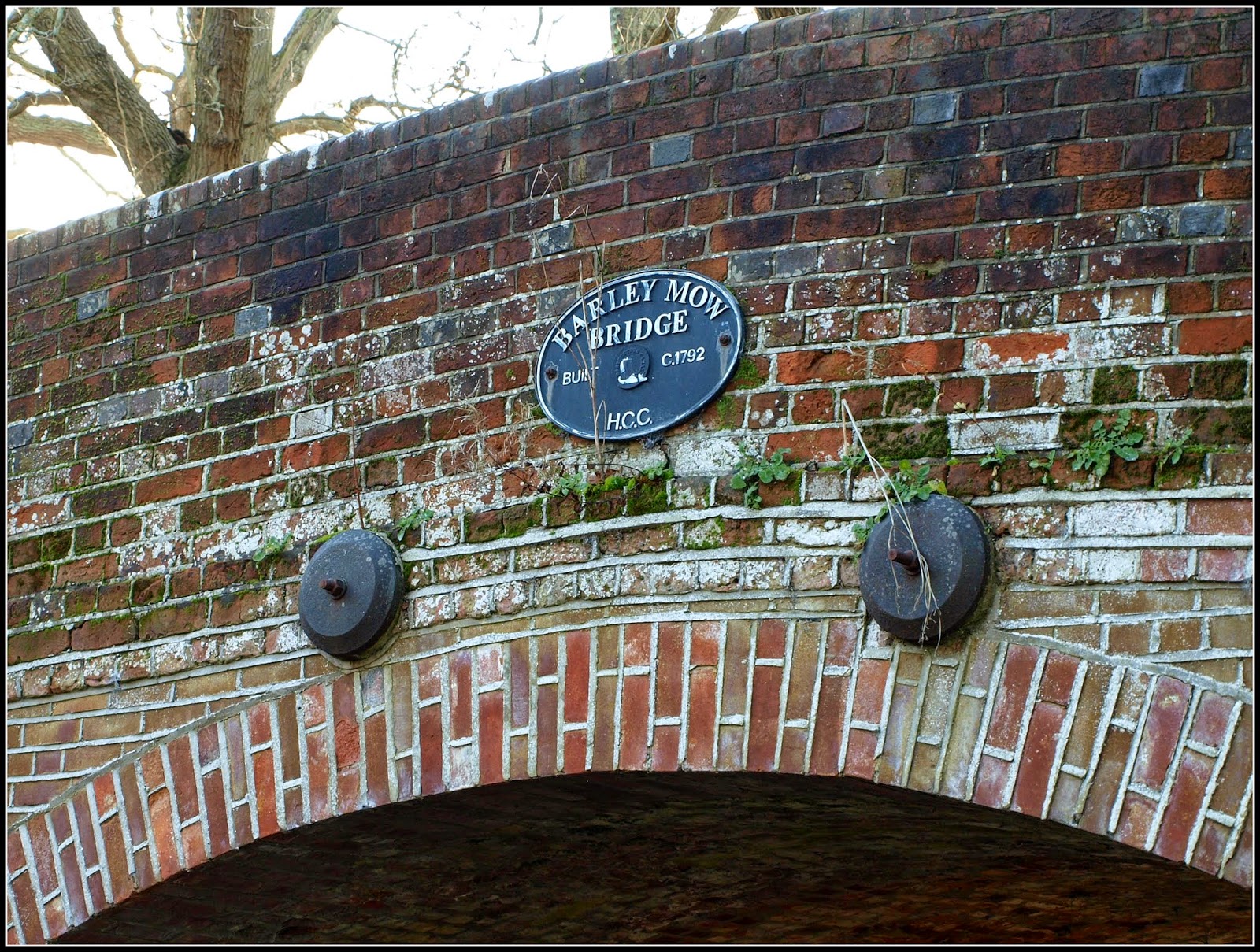 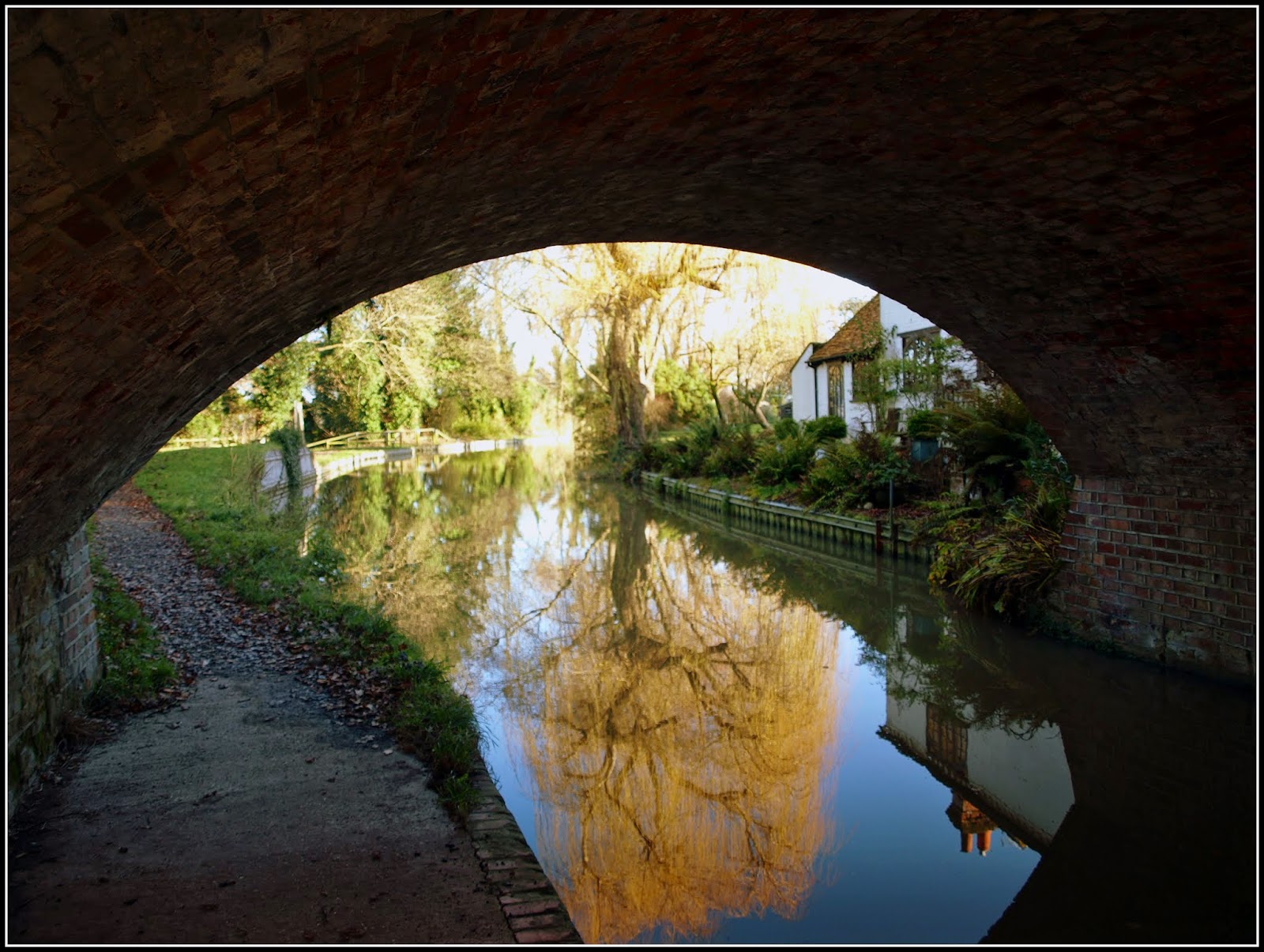 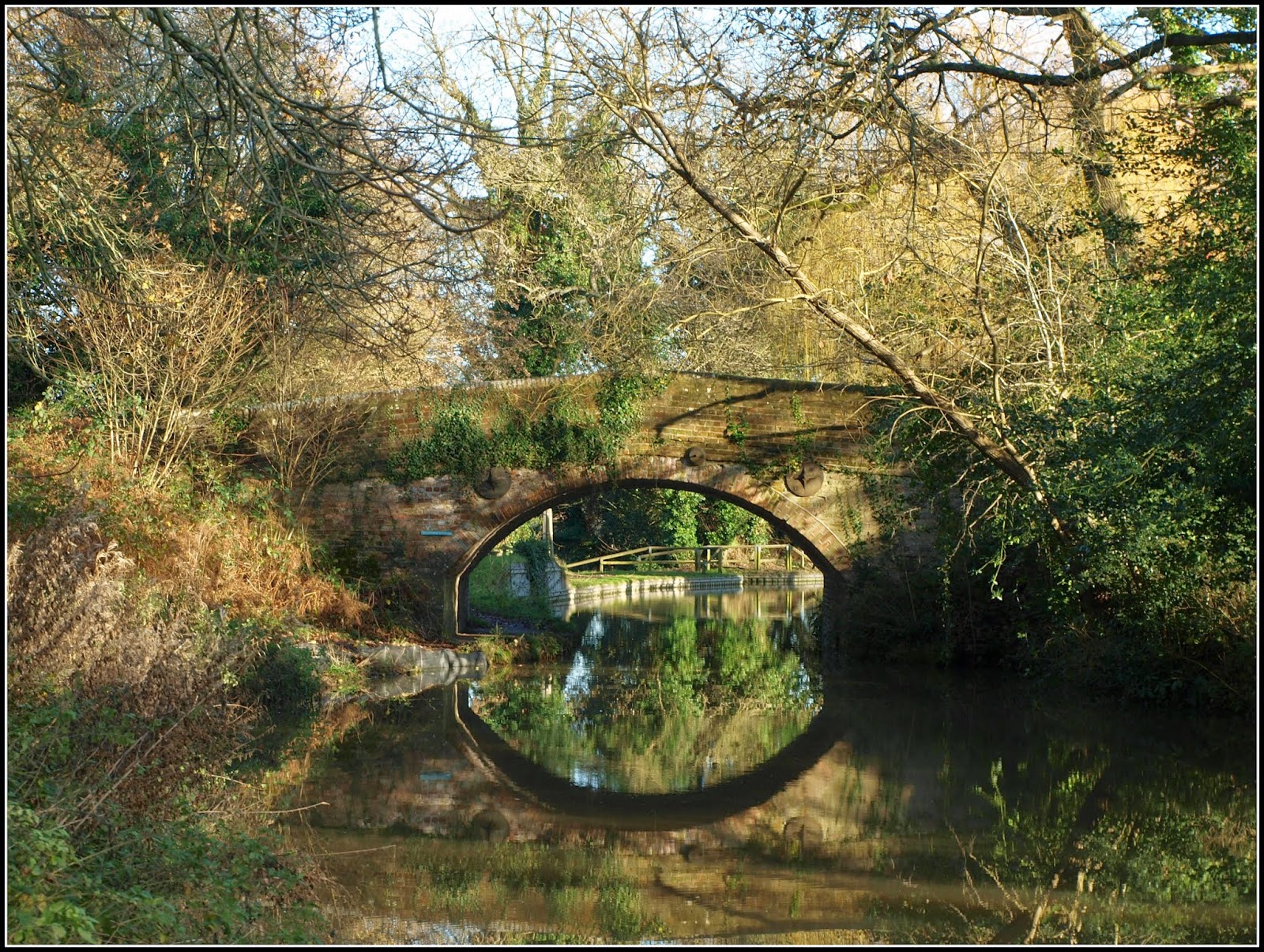 From here I headed West, towards Basingstoke. The towpath is narrow - barely wide enough for two people to walk side-by-side. I wonder how it must have been in the days when horses pulled barges along the canal. It must have been difficult for barges going in opposite directions to pass each other! 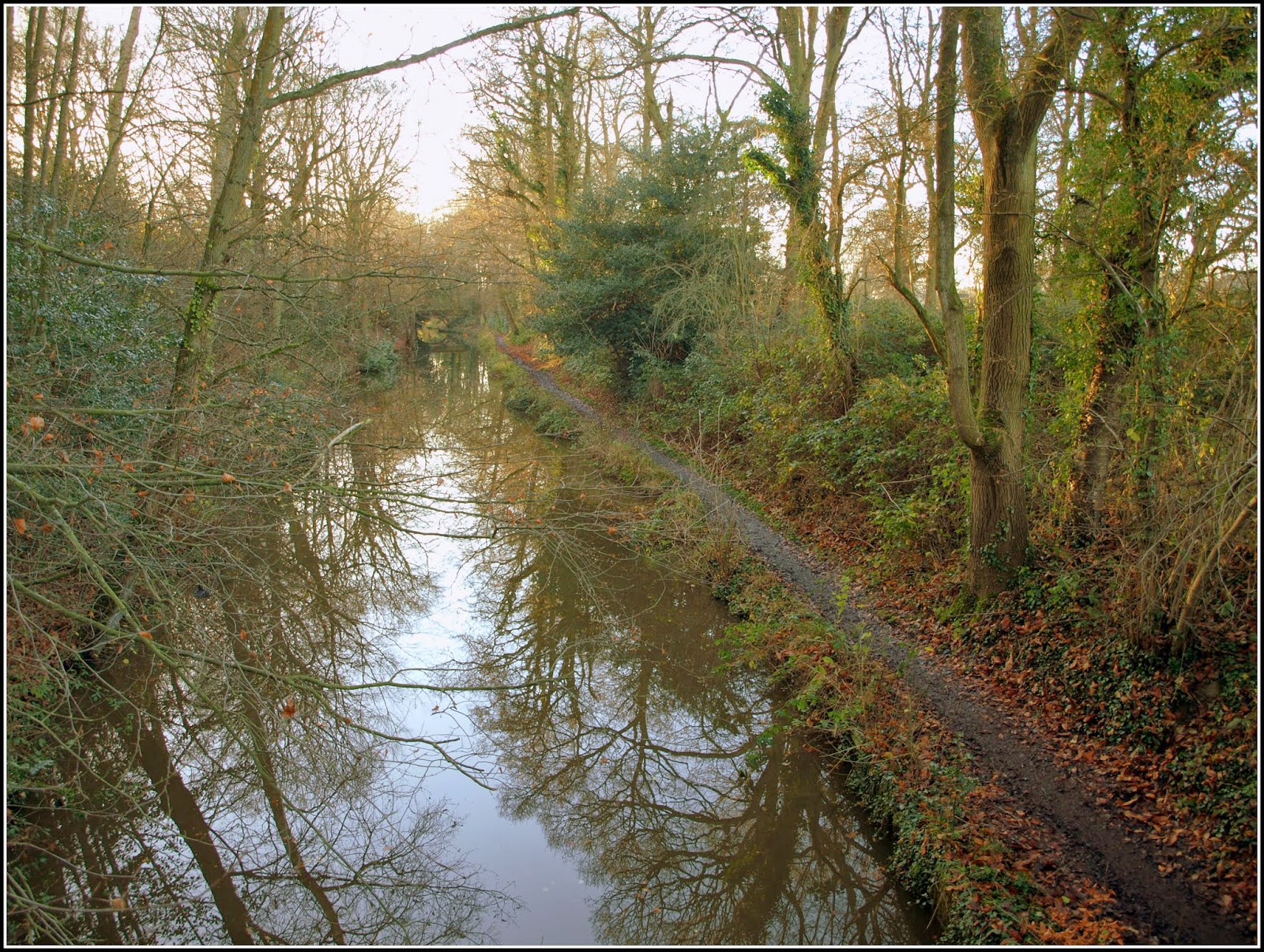 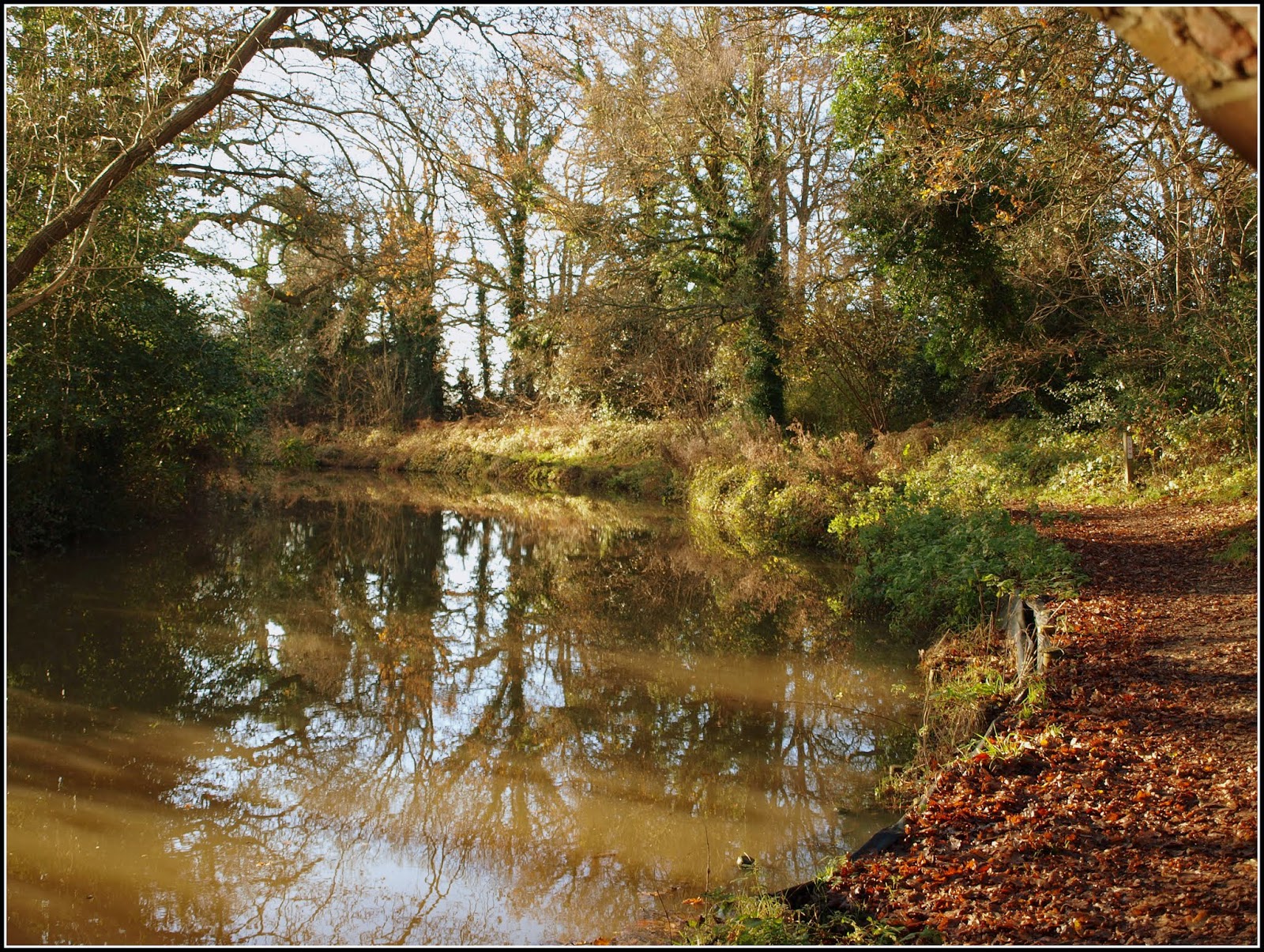 As you can see in my photos, the canal banks are thickly lined with trees and bushes. Some of the trees (many of them oaks) are obviously very old. Maybe they were planted back in the 18th Century when the canal was made? The trunks and roots of these trees are ideal sites for fungi and little creatures.

Since it was so still and quiet, I was very aware of the movements of wildlife. The trees above me were full of the scurryings of squirrels, and the dry leaves under the bushes rustled frequently as Blackbirds scratched around for insects to eat. I tried to get some photos of Robins, but frustratingly they never posed in any photogenic locations. The only wildlife that moved slowly enough for me to photograph were the Mallard ducks, of which there were many: 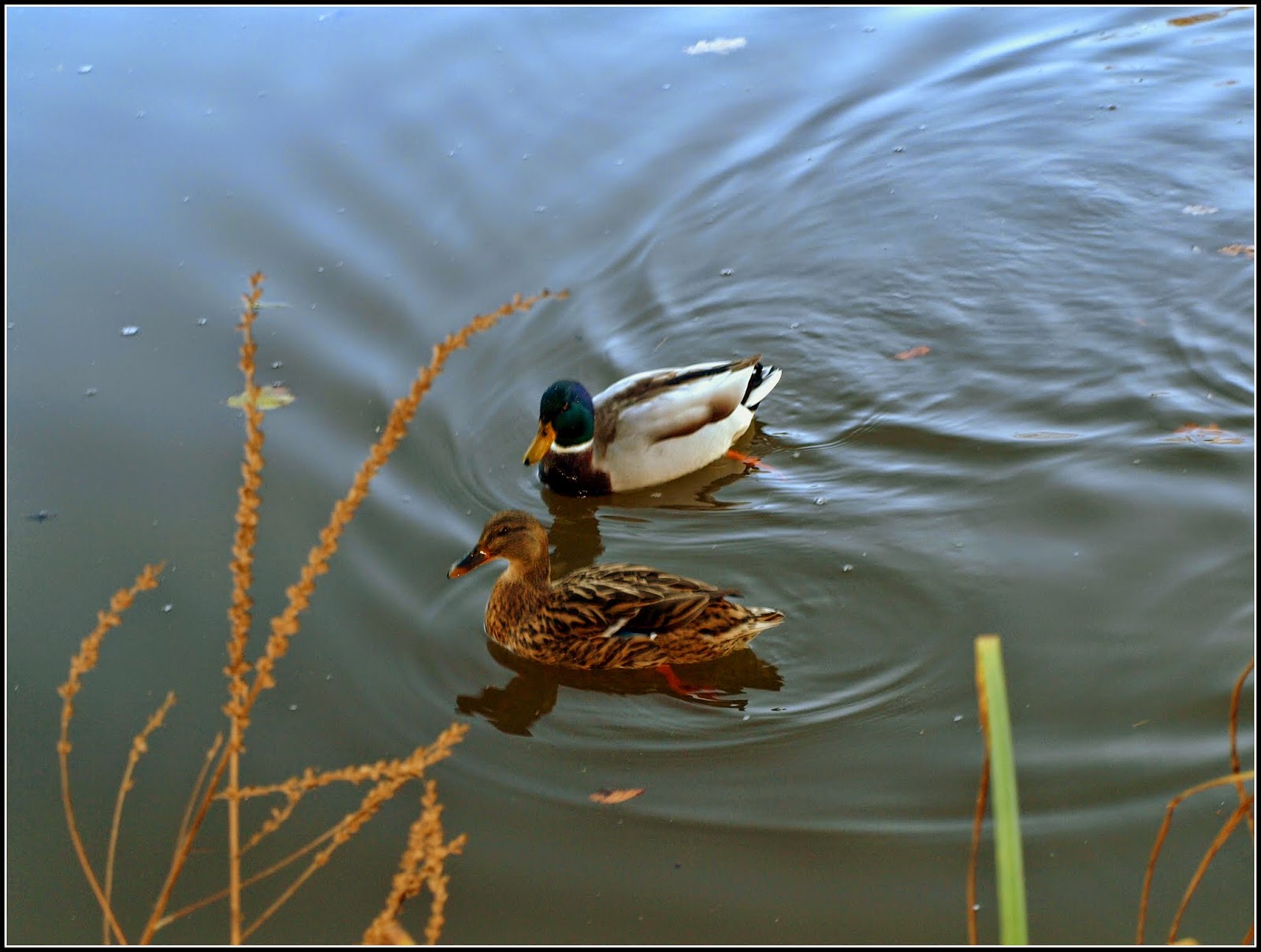 Actually, I think they are feral ducks rather than wild ones. 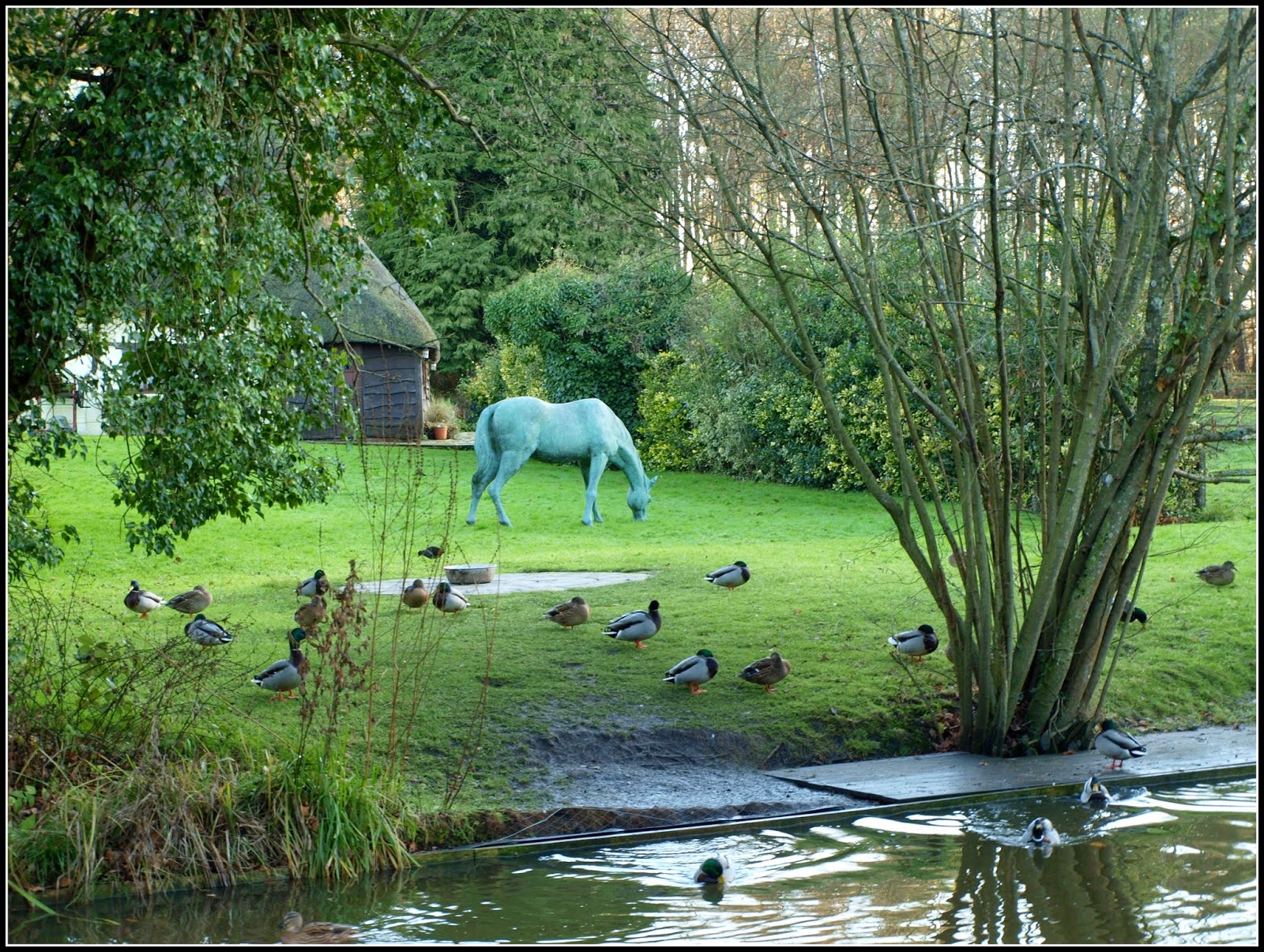 That bronze horse statue is very realistic, isn't it? It stands in the grounds of an ancient thatched cottage: 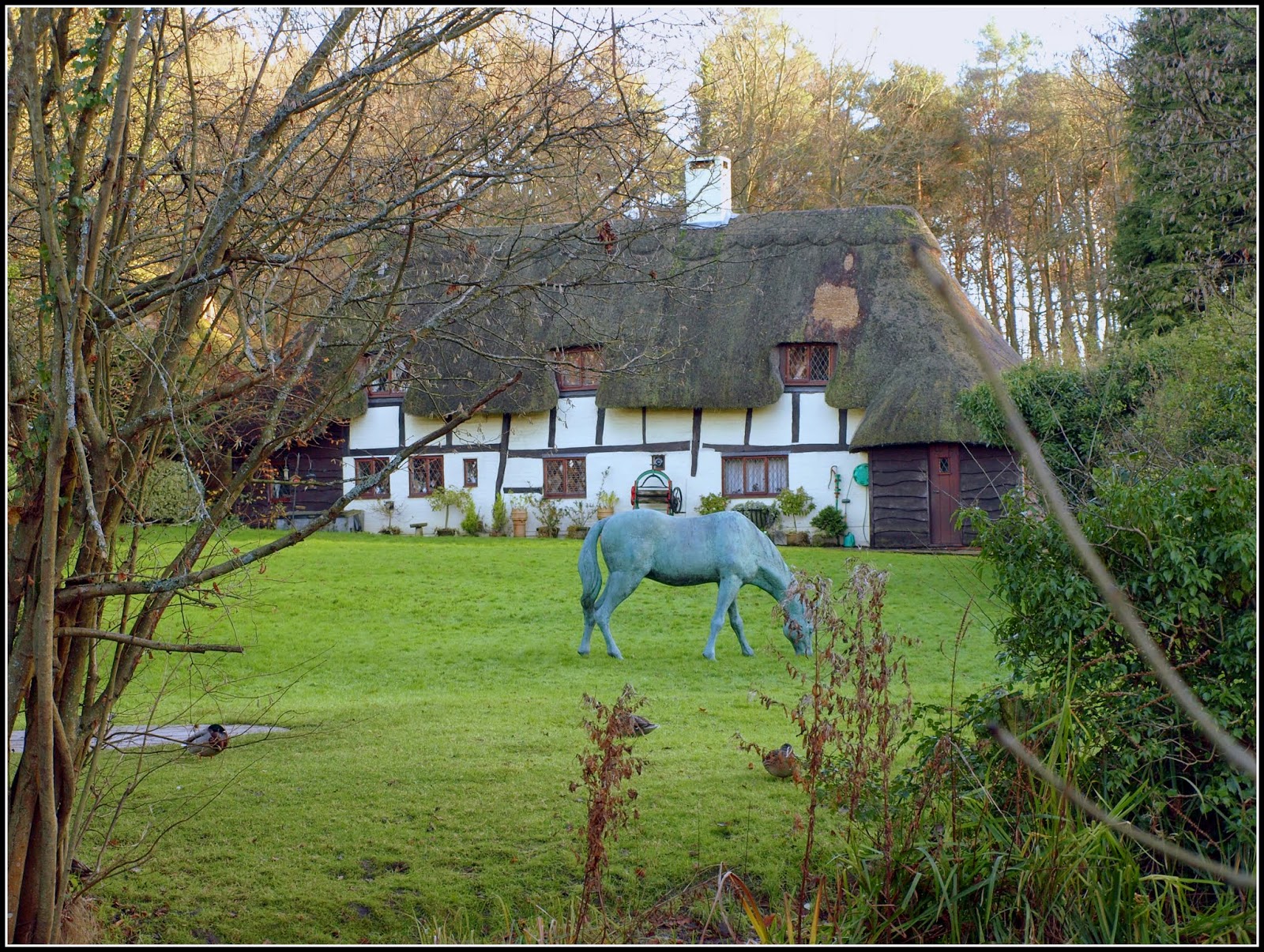 Thatch is more characteristic of the New Forest area of Hampshire than round our way, but you do still see some of it in the older villages. This is Hazel tree - one which obviously doesn't mind getting its roots wet. 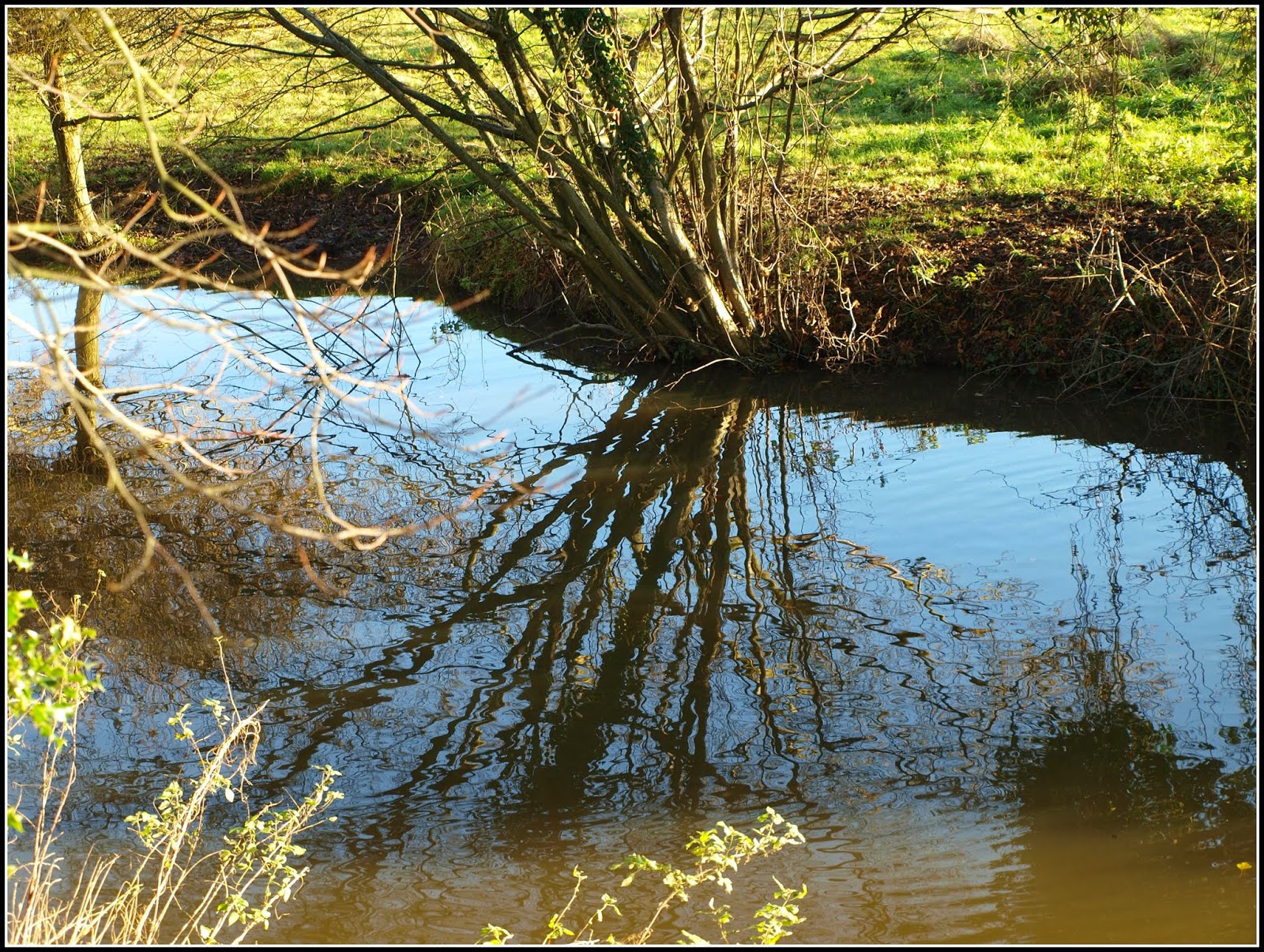 This is a Willow. It has tumbled down - the almost horizontal moss-covered trunk can be seen in the background - but it is still hanging onto life. Its roots dangle in the water looking very much like a mangrove! 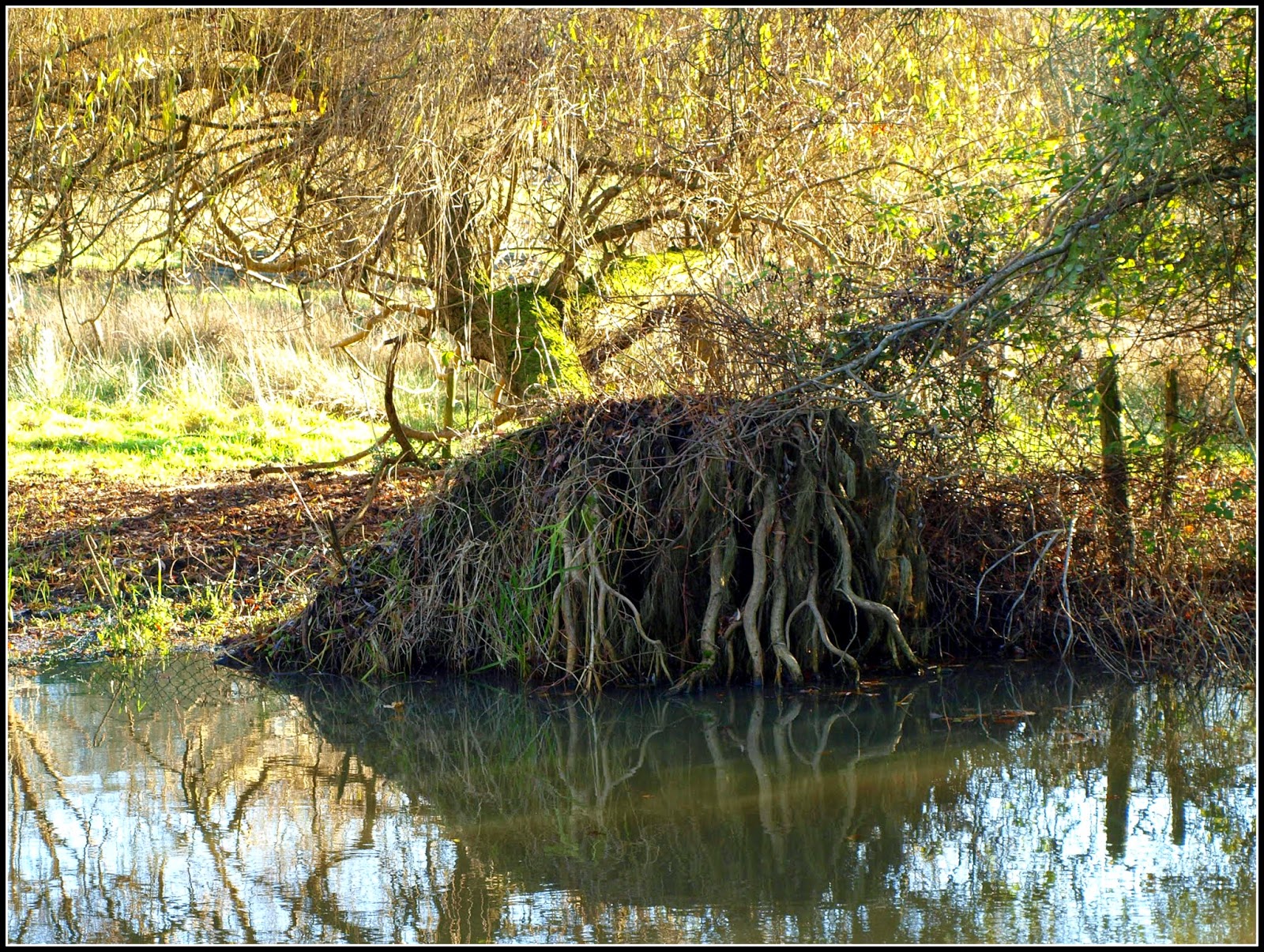 After a while I arrived at another bridge. This one is "Stacey's Bridge" Since I had been dawdling along taking so many photographs, it was mid-afternoon by now and I thought I had better turn back, otherwise it would be dark before I got back to the car. I crossed the canal by the bridge and came back along a minor road that runs parallel to the canal. 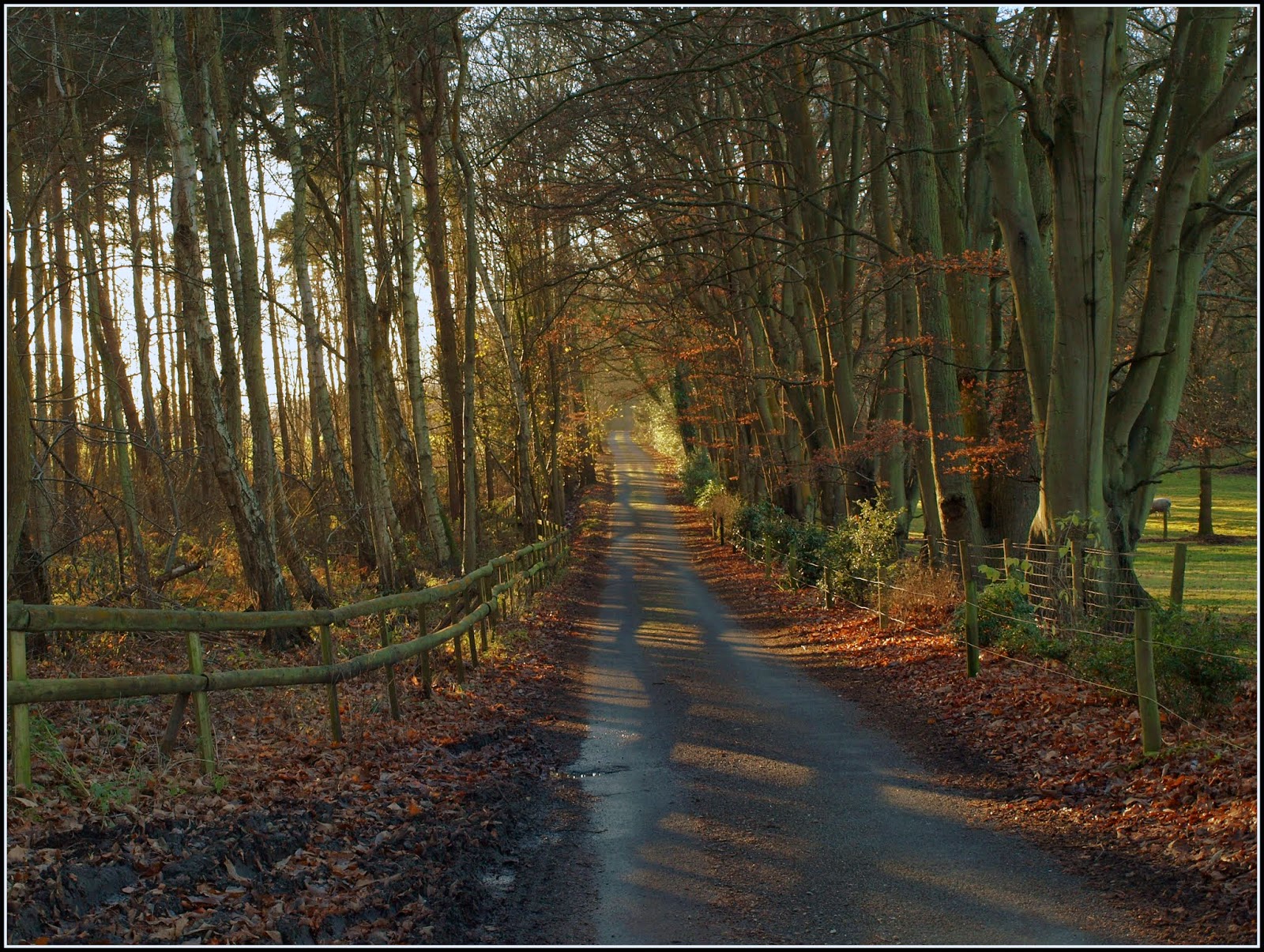 The sinking sun gave the trees and fields a lovely mellow russety glow. 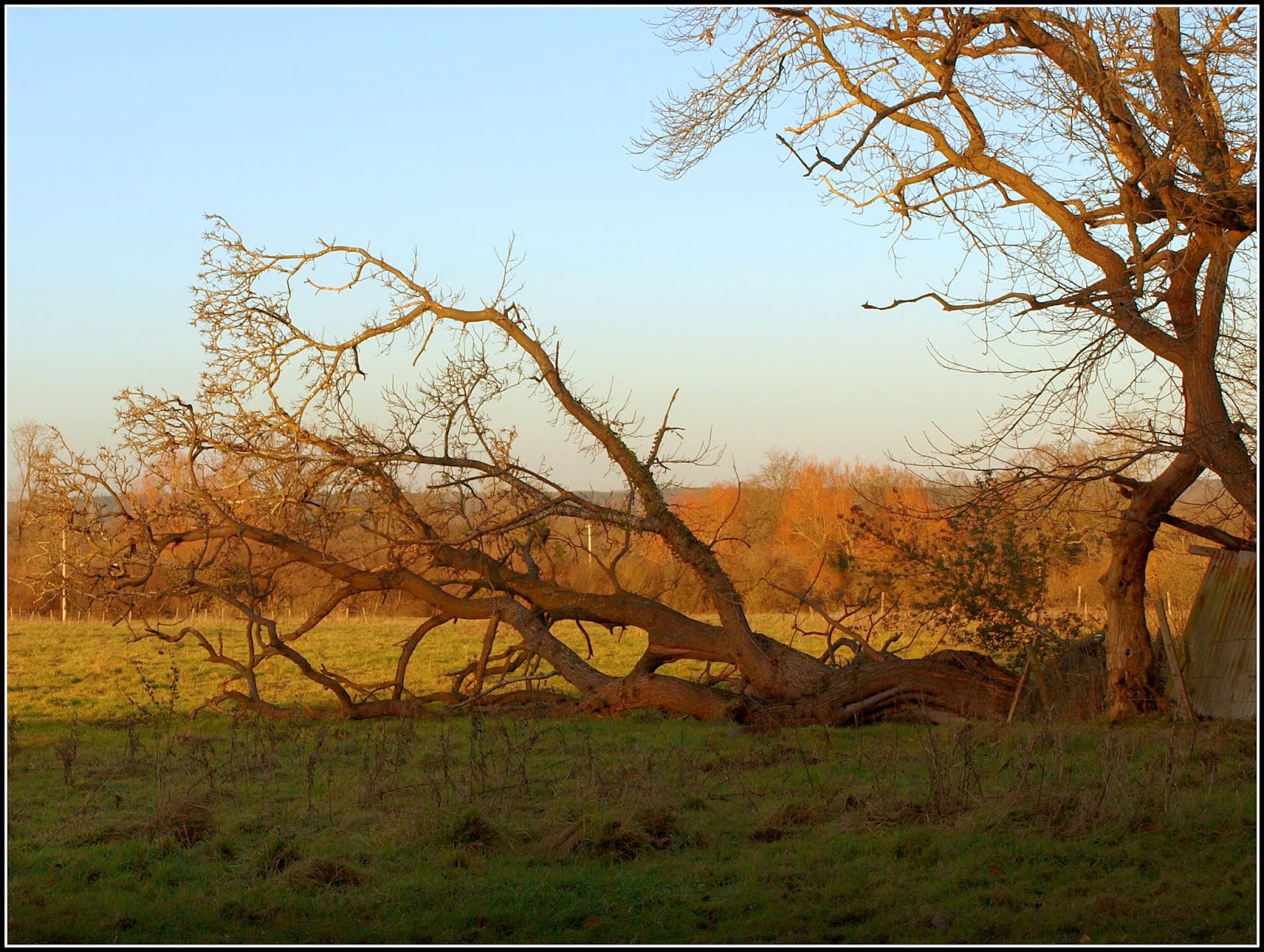 Just as I got back to the car park, I saw this: 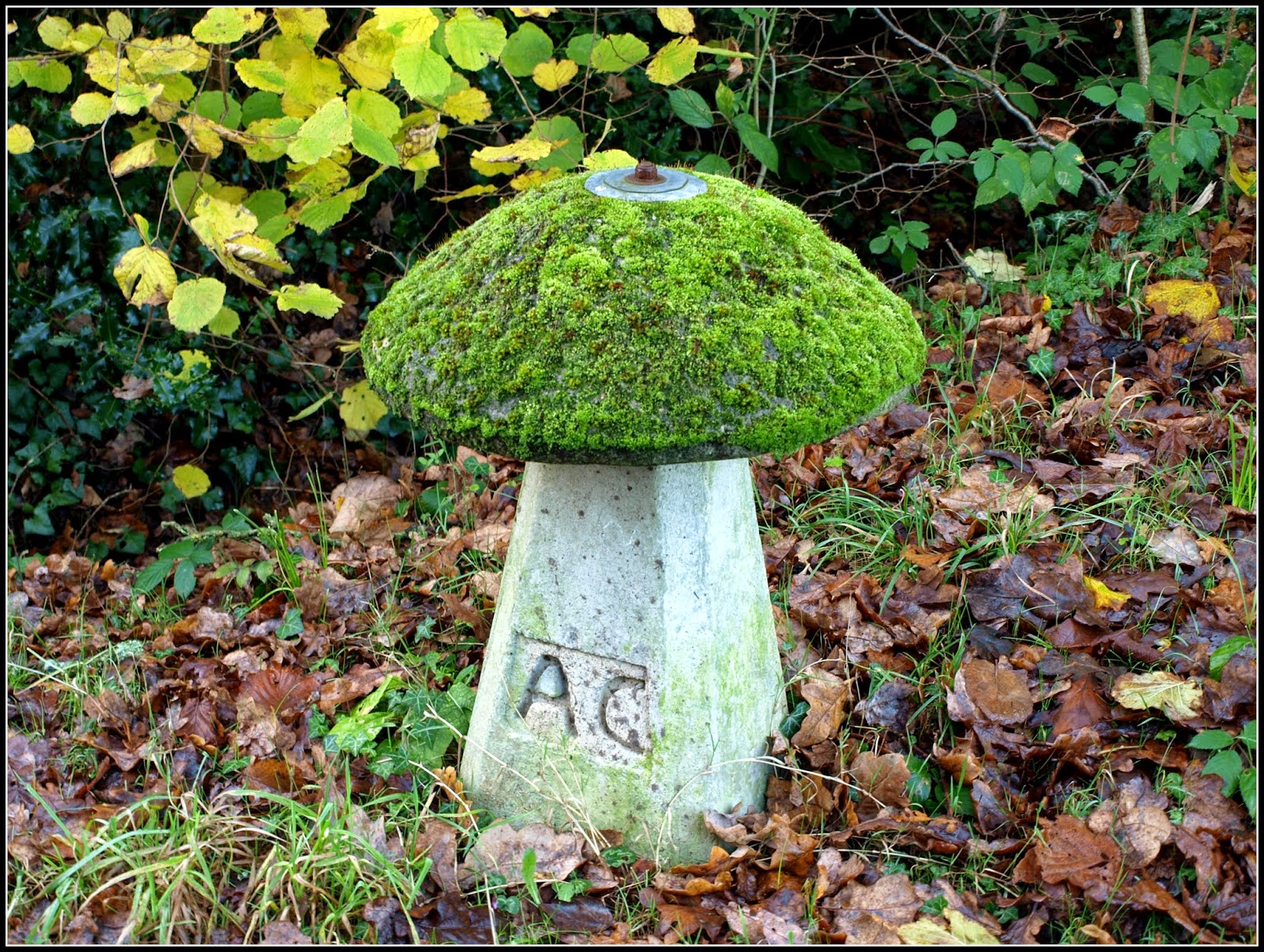 Which reminds me, tomorrow I will write about some of the plants and fungi I saw.