Last weekend we bought a copy of "Persiana" by Sabrina Ghayour: 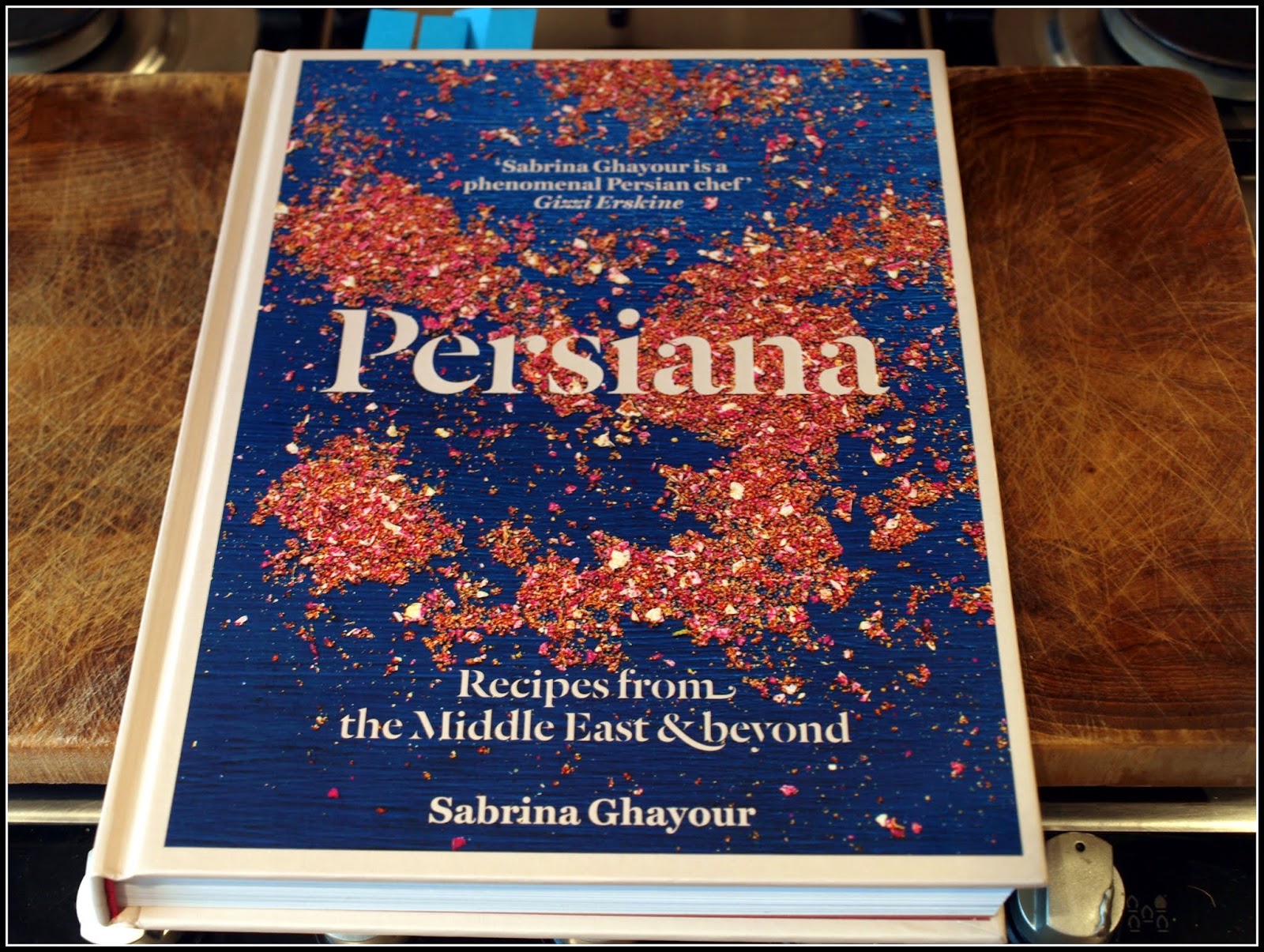 As the sub-title informs us, this is a book of "Recipes from the Middle East and beyond". Many of you will know that I am strongly influenced by the cookery of Yotam Ottolenghi, and the style of cooking in Sabrina's book reminds me of this. Fortunately, Jane also loves eating and cooking this type of food. There are loads of recipes in the new book that we want to make as soon as possible!

Last Sunday we made a start. This is the first dish we chose - Lamb and Pistachio Patties. 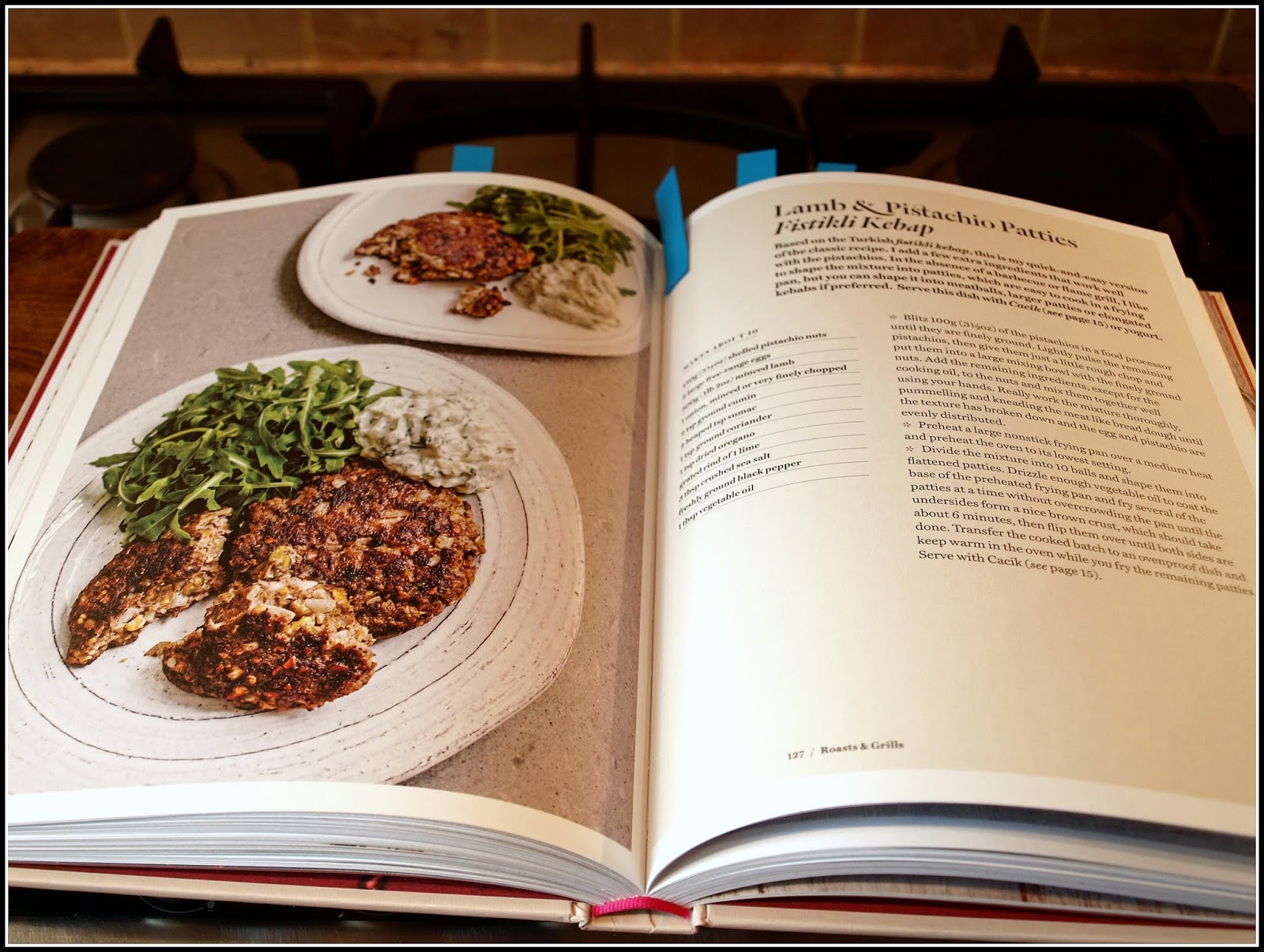 To be honest, Jane did most of the cooking on this occasion, but my main contribution to the meal was to bake some bread. I chose to make "Maneesh", not from Persiana (which only includes two bread recipes), but from Paul Hollywood's "Bread". It is a classic Middle Eastern flatbread with a crispy crust and a soft interior. Most attractively of all, it is topped with a mix of Sesame seeds and Za'atar. 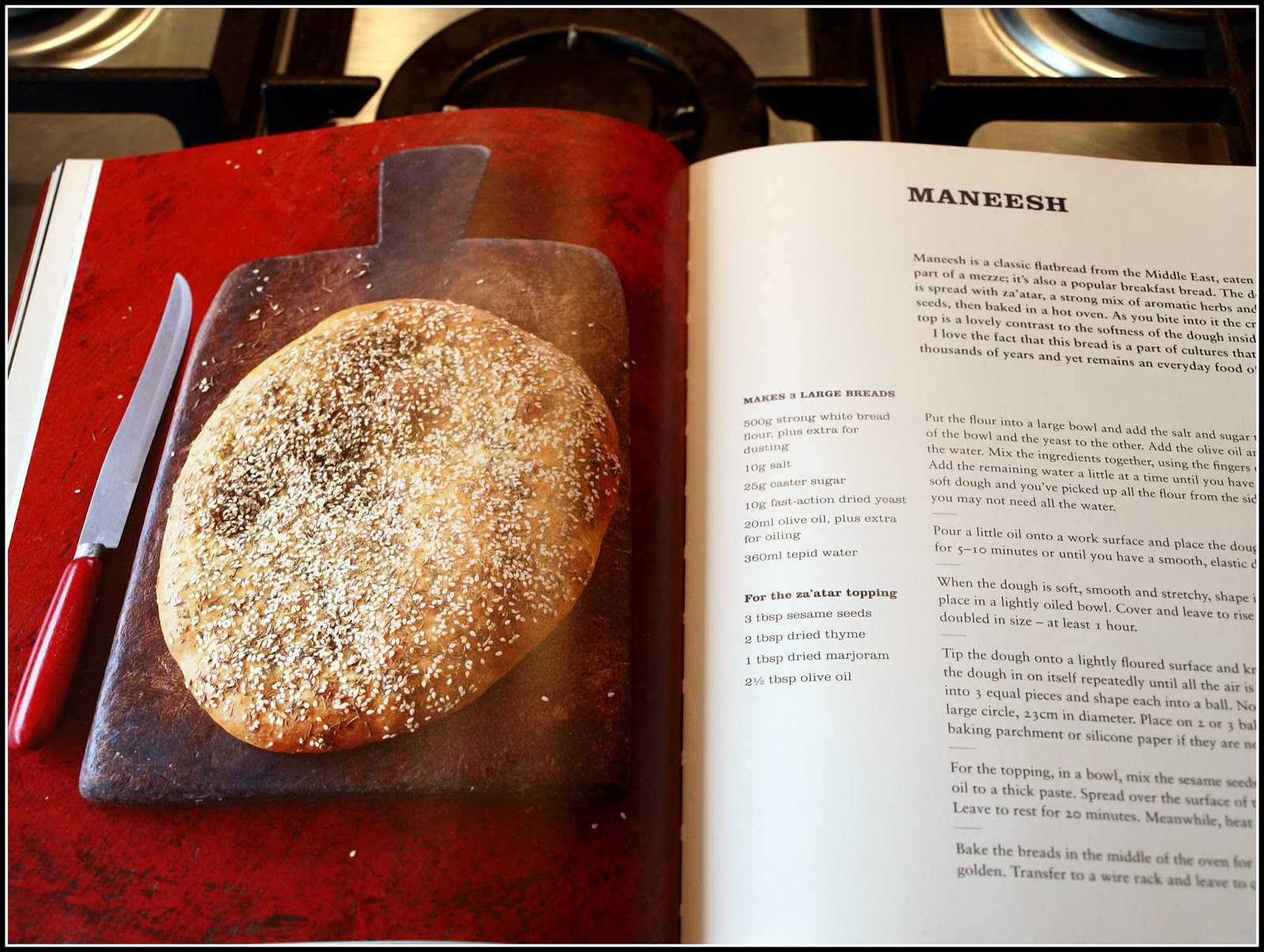 Uncharacteristically, I followed Paul's recipe! Well, almost. The only change I made was to alter the composition of the spice topping. I used a mixture of Sesame seeds, Fennel seeds, dried Thyme, dried Oregano and commercial Za'atar.

The bread is made in a fairly conventional way, mixing the dough; letting it rise; knocking it back; dividing it into pieces; flattening it into rough circles, and letting it rise a second time before baking. The spices are made up into a thick paste with olive oil, and spread onto the dough before the second rising. 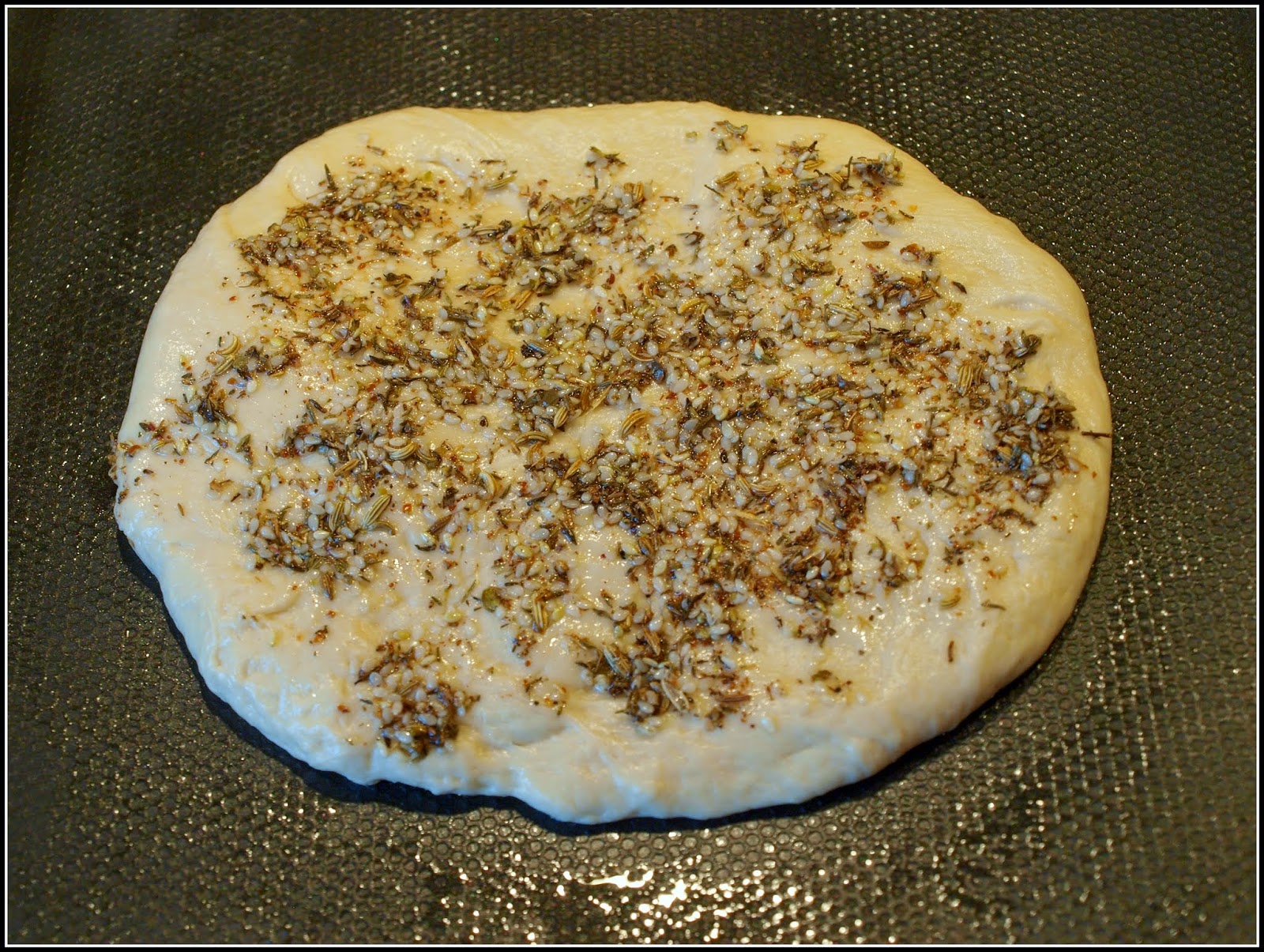 In fact, the circles of dough look just like pizzas! 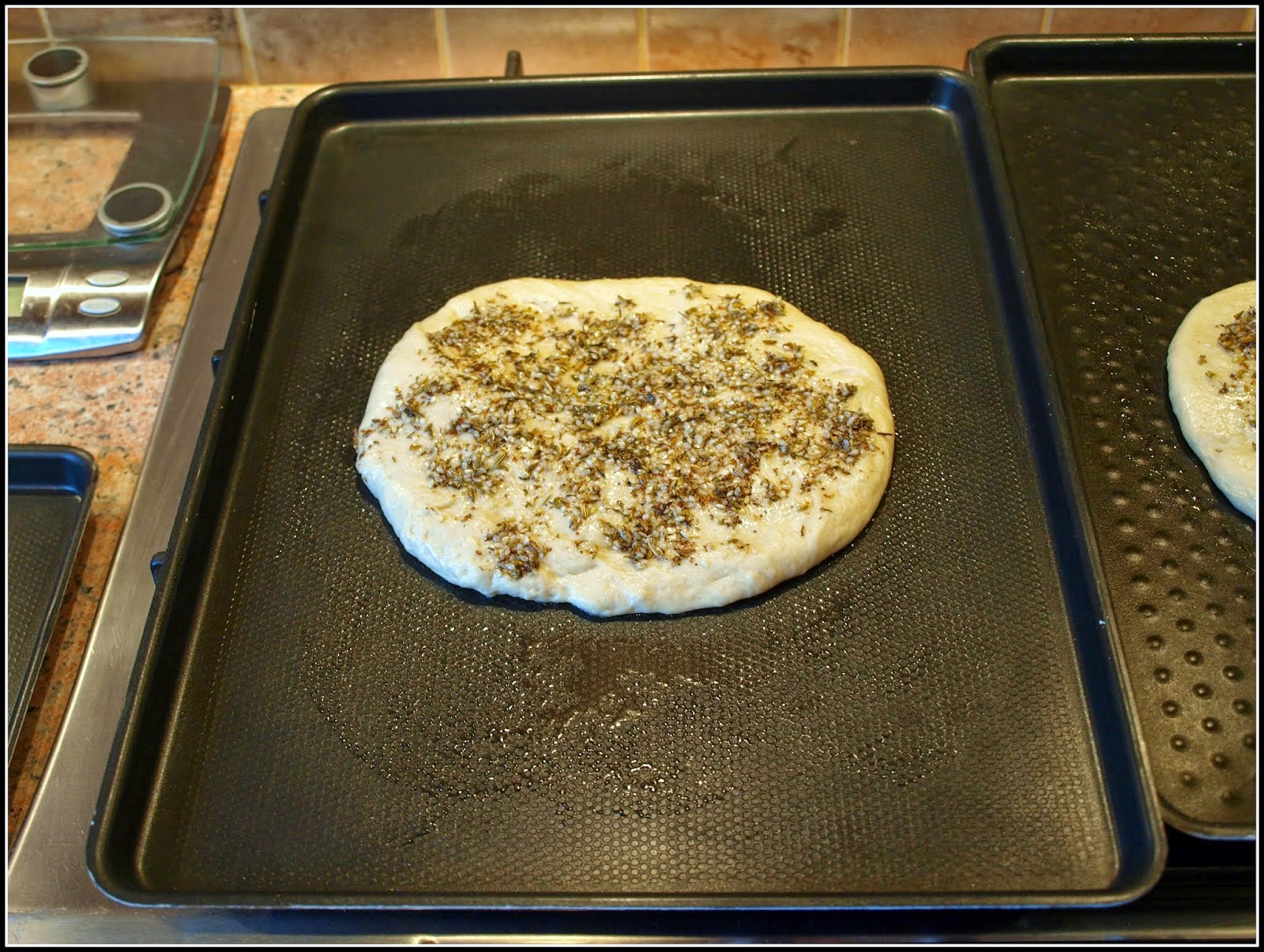 After cooking at high temperature (230C) for about 15 minutes, this is what you get: We like our bread Well Done, so I gave it a couple of minutes more than the 15 recommended in the recipe. I think perhaps my dough may have been a bit thicker than Paul Hollywood intended. 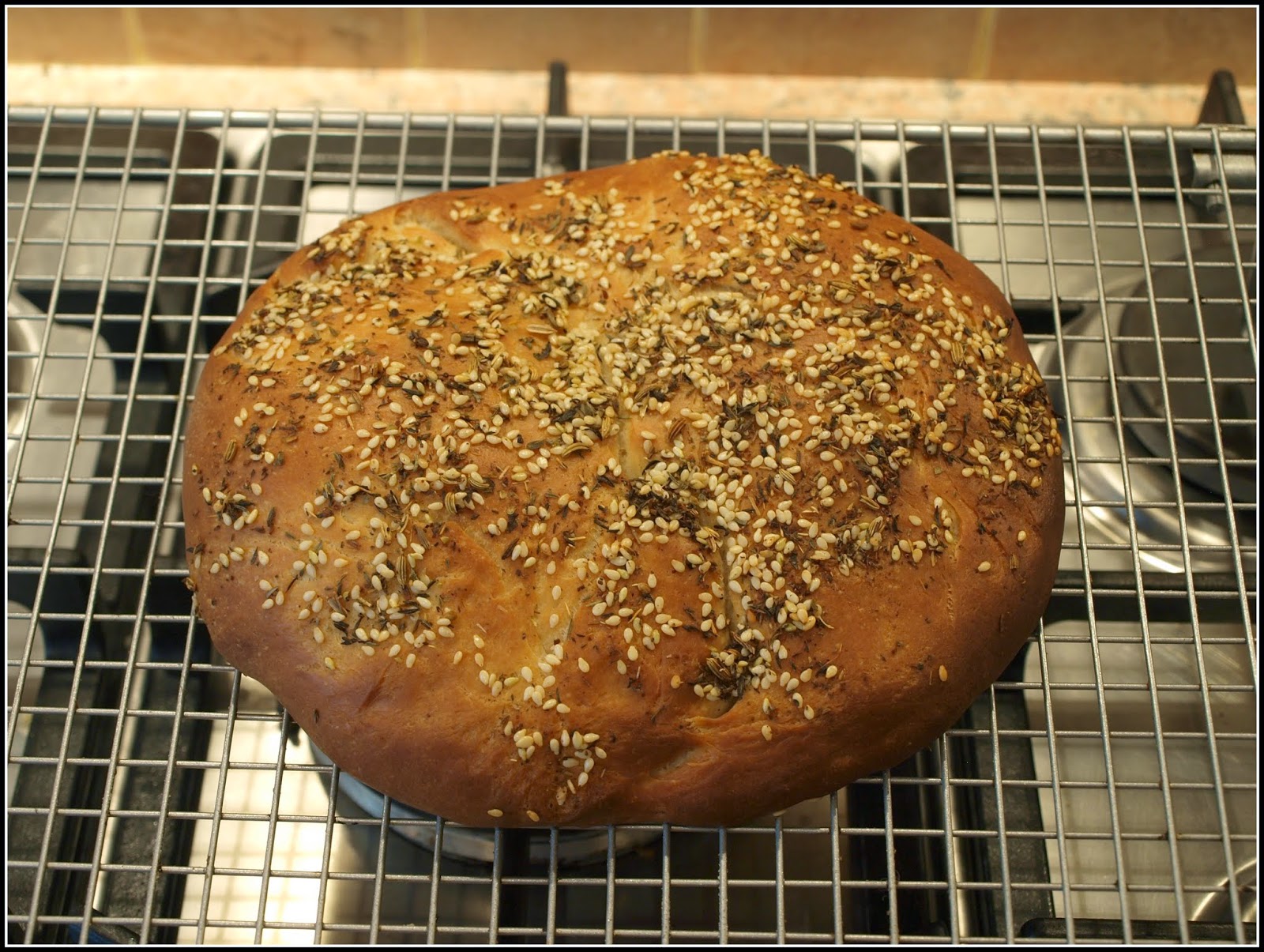 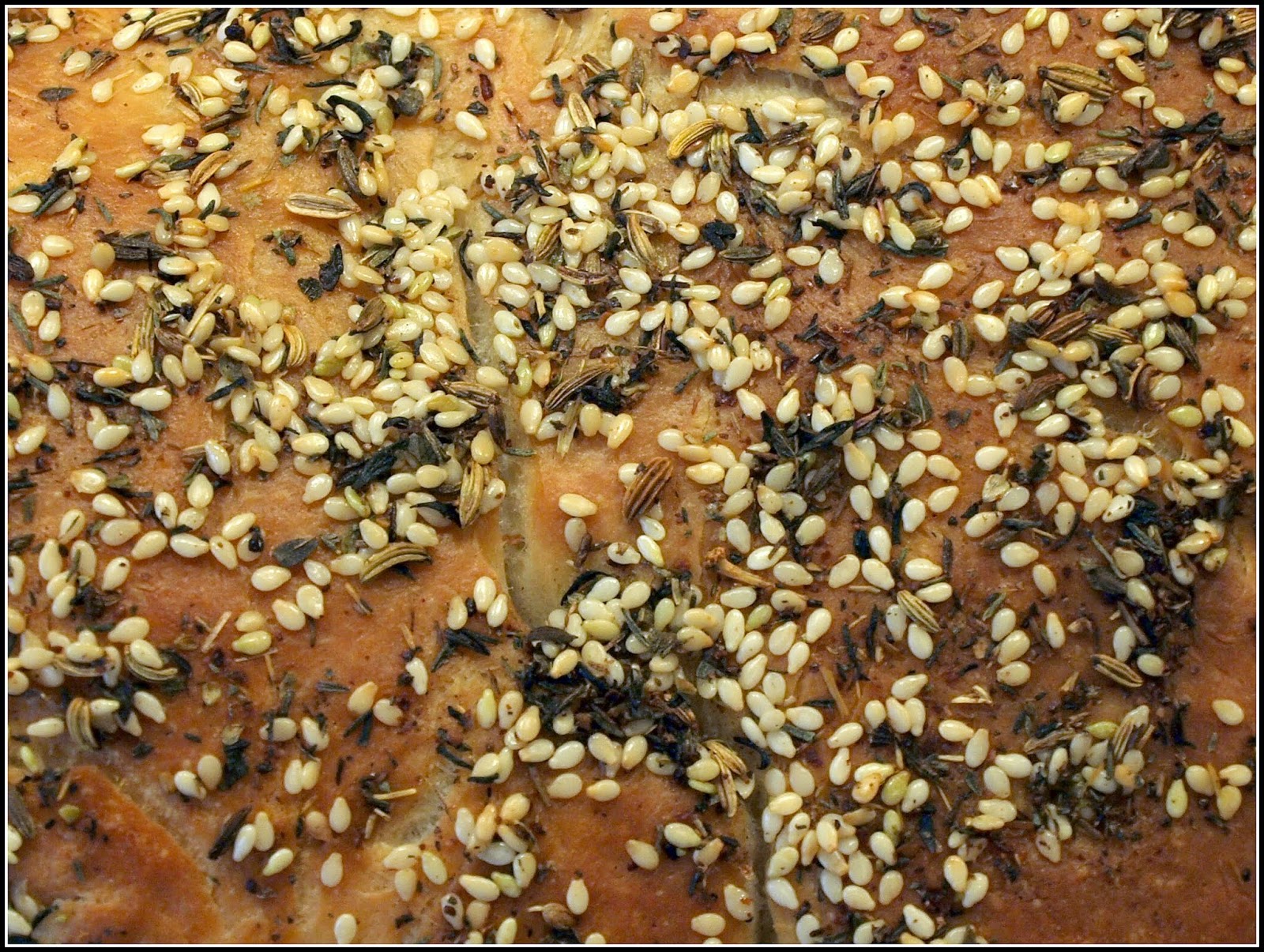 This is what the bread looked like when cut: 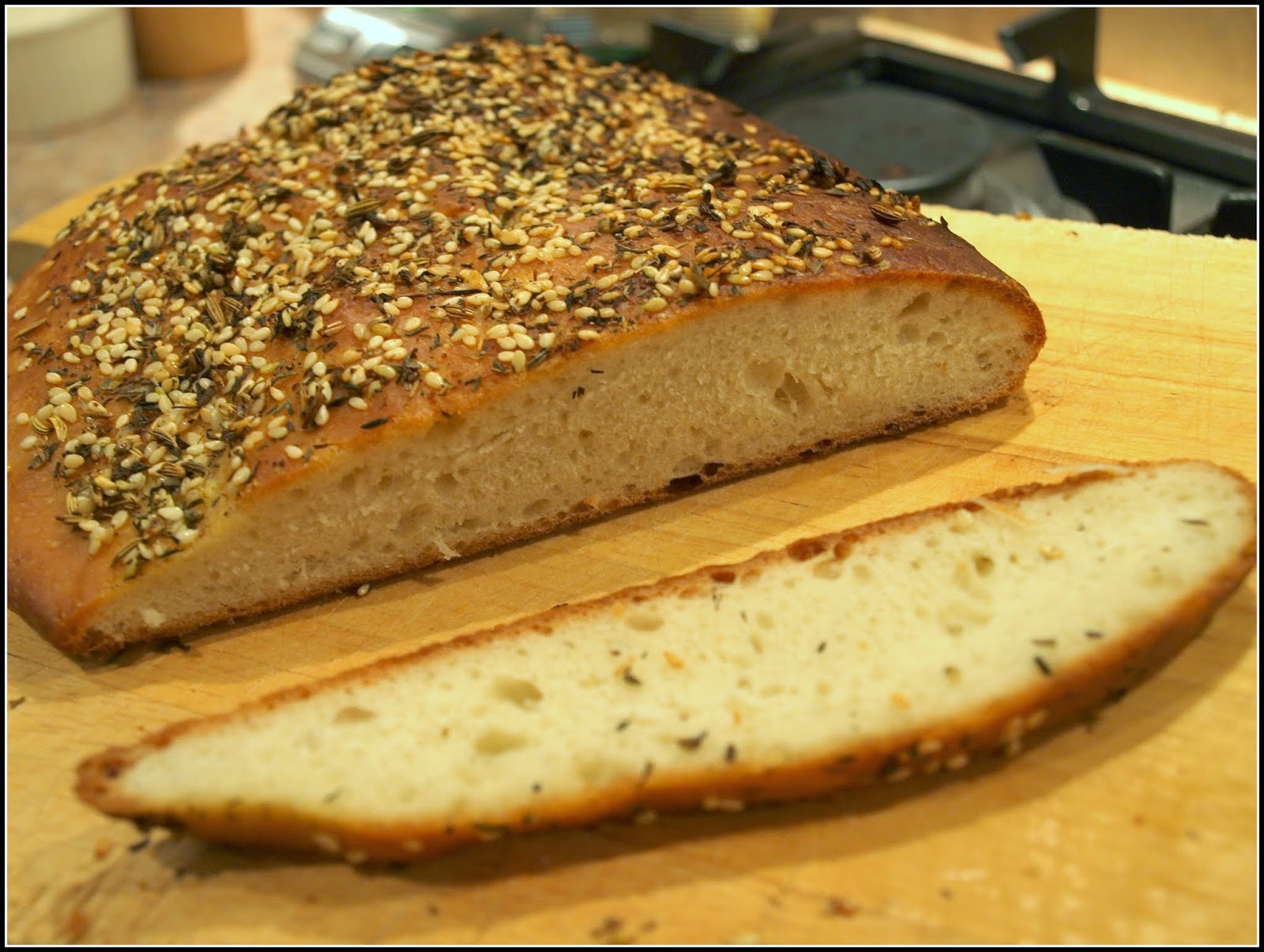 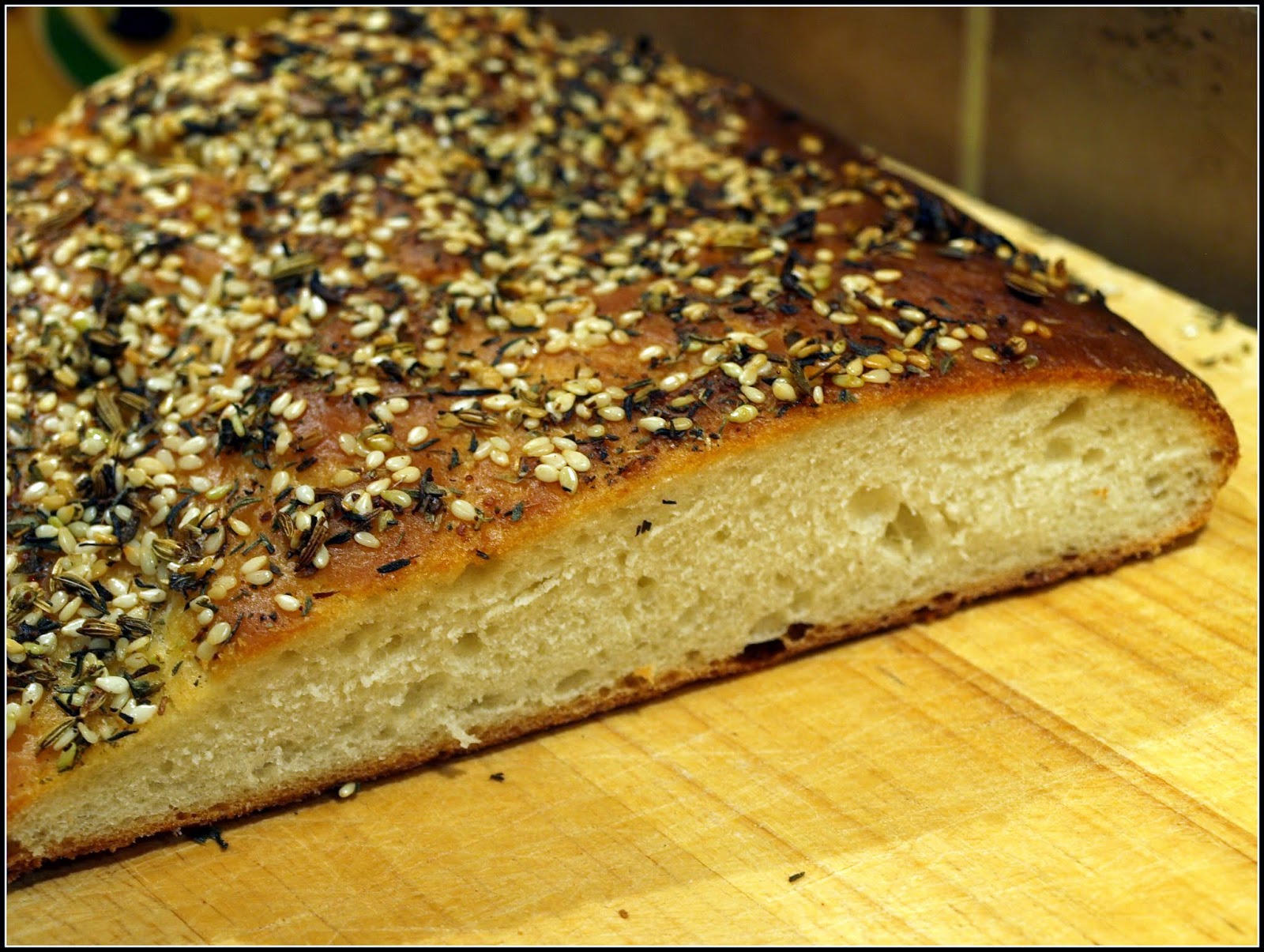 Our bread was served as a starter, with olive oil and balsamic vinegar to dip it in. The olive oil was one described as "fruity and pungent, with a strong peppery flavour". It went perfectly with the bread and its seedy topping. Lots of flavour in the crust, but also a soft inner crumb with which to mop up the oil. 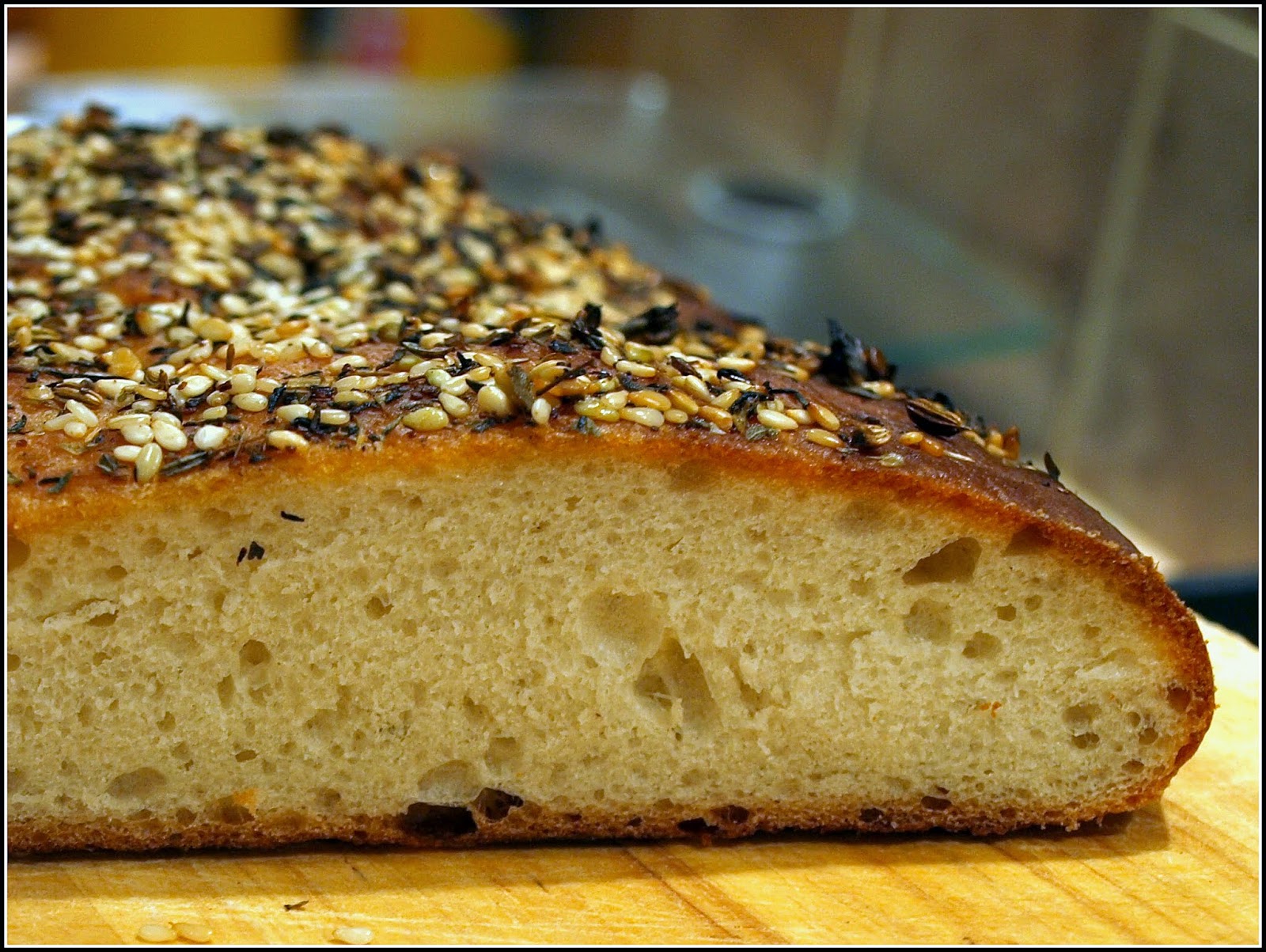 To be honest, the crust was not as crispy as I would have liked. Being as dark as it was, it was very tasty, but it lacked "crackle". I know this is hard to achieve in an ordinary domestic oven. Next time I do this I will put a tin full of boiling water in the bottom of the oven, because I think the steam it produces helps with achieving the right texture on the crust.
Posted by Mark Willis at 12:00