Buy one, get one free!

We gardeners are always on the lookout for a bargain, aren't we?﻿ Last weekend was a Bank Holiday weekend (that is to say the following Monday was a public holiday), and I know that my local garden centre has an end-of-summer clearance sale at this time, so I went to see if I could pick up a bargain or two...

To be honest, most of the plants in the clearance sale were well past their prime, and you had to look very deeply to see their potential. I mean, who would want to buy Petunias in full bloom at the end of August? However, I was on the lookout for Perennials that would be a cheap investment for NEXT year.

I really wanted to get an Echinacea (Cone Flower) - something I have been hankering for for quite a while. The only ones they had were a few rather tatty-looking white ones. But then I thought: white would work well in my border, along with my white rose and my white Buddleia, and as regards tattiness, who cares? The plant wll soon be dying back for the Winter anyway. So into my basket went one Echinacea "Pom Pom White". 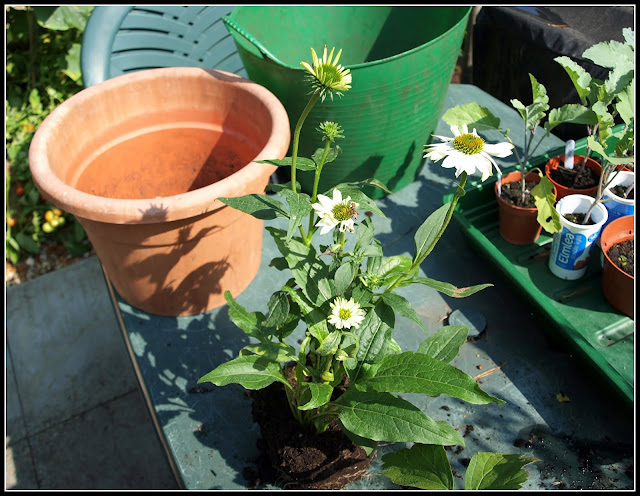 When I buy plants I always look carefully at the specimens offered for sale before choosing which one to buy. This is why: 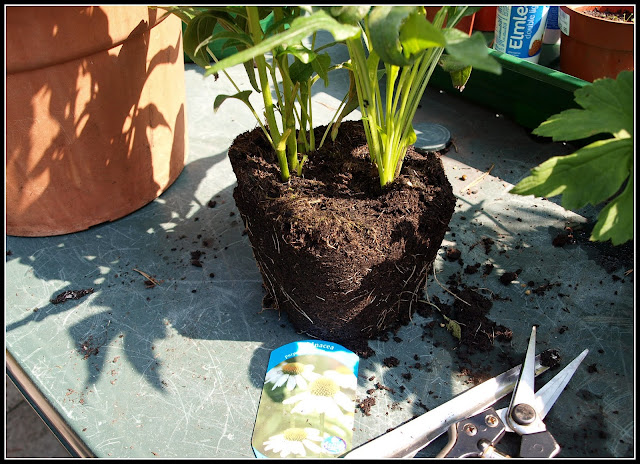 The one I bought is actually TWO plants - or at least one that can be easily divided into two. Bargain! so now I have two Echinaeas. 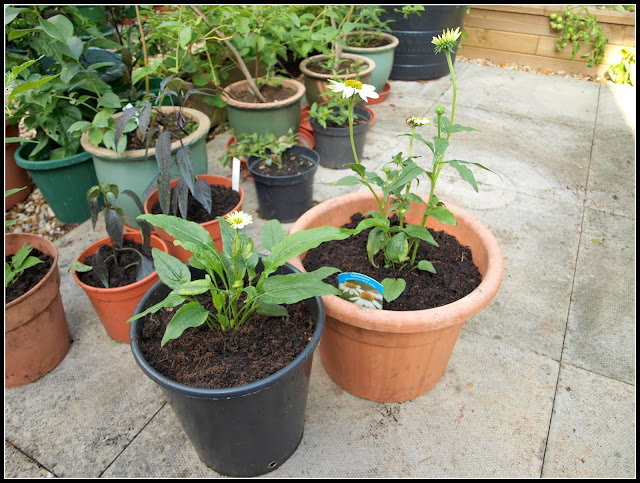 Having accepted that white would be OK in my garden, I consciously started looking for pastel colours amongst the other plants. ﻿This one took my fancy - a Japanese Anemone: 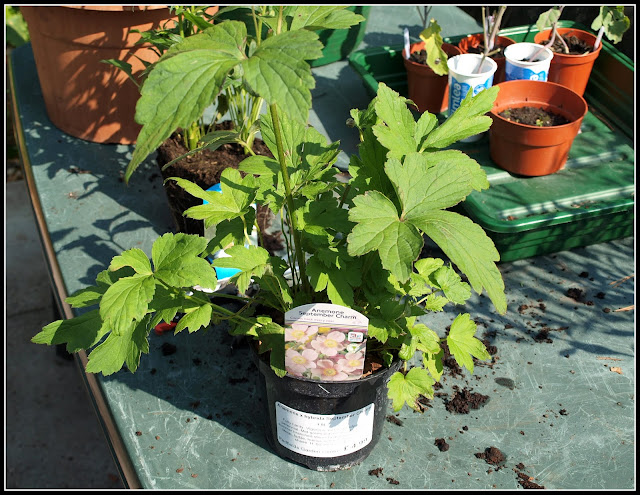 It is a light pink one called "September Charm".  I think it is a bit of cheek to call it "Home-grown"! They mean "grown in the UK", which is not the same thing at all. Actually this was not a clearance sale item - it was still offered at full price, but at £4.99 I thought it was good value. 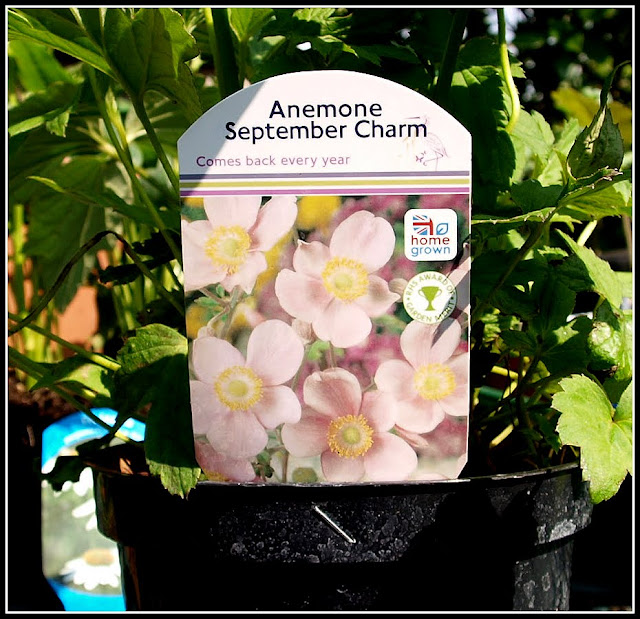 Apparently it likes dappled shade, so I have found it a place in the border, between the ferns and the purple Buddleia. 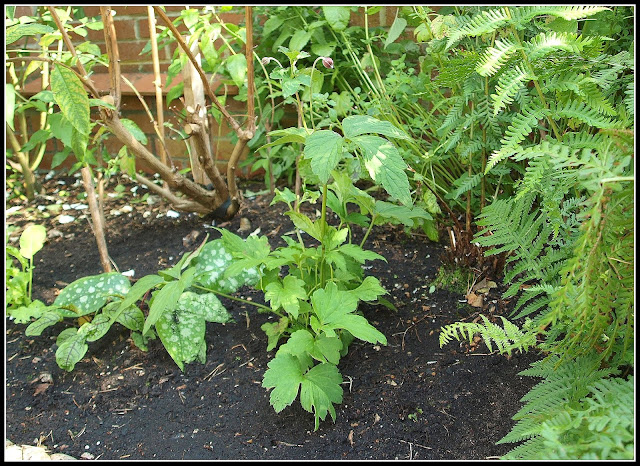 ﻿
In one part of the Garden Centre were the vegetable plants. Most of the offerings here were very unattractive, such as Basil that had flowered and gone to seed, and Lettuce seedlings that were already bolting, but there were a few chillis! Now you know I find it hard to resist a good chilli plant... As it happens, I bought two. One was this nice Red Habanero, which has a few fruits on it, and which I'm confident will survive into next year given care and attention (like the Scotch Bonnet plant I bought this time last year, which has been fantastic). 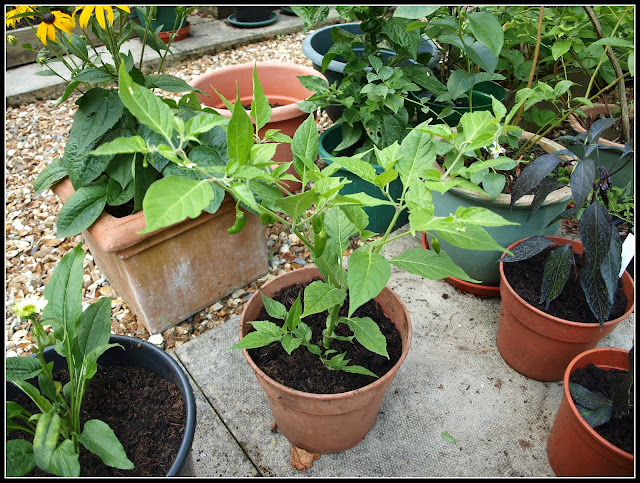 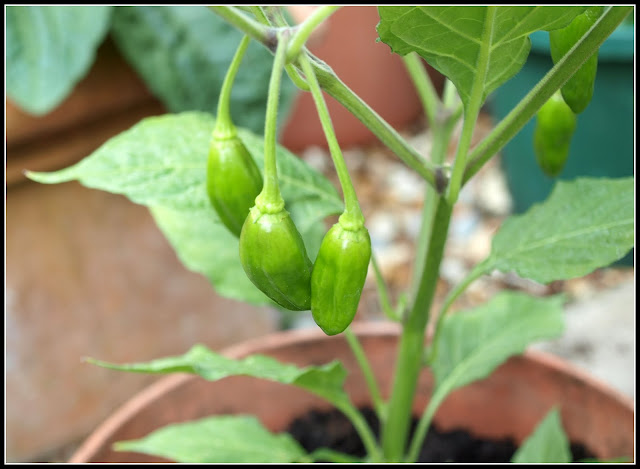 The other one I bought was a very handsome black one called "Nosferatu"﻿ (as in "Night Creature" or "Vampire"). It's foliage and fruits are very dark-coloured, though apparently the fruits will turn blood red when ripe! 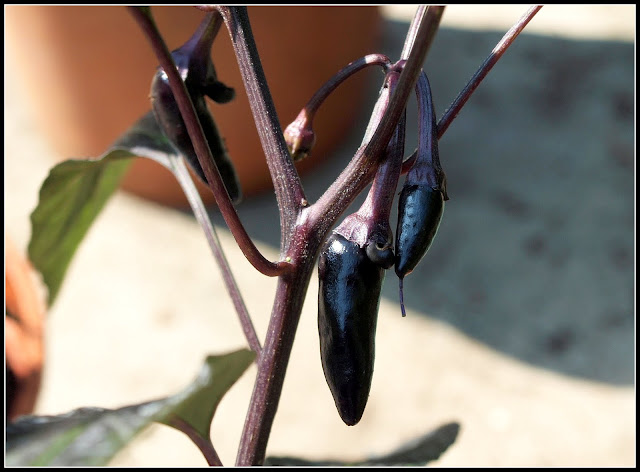 I chose wisely on this one too, because one of the pots had two very closely-entwined plants in it, which I was able to separate when I got home, and pot-up individually. One of them is quite small, but they both look very healthy:
﻿ 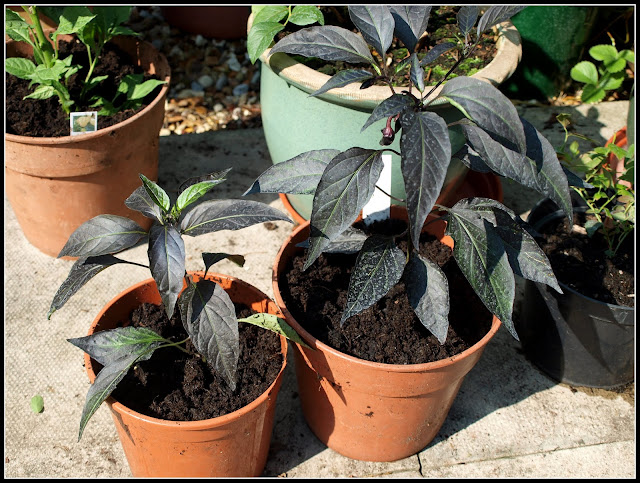