While you are reading this, I'm away on holiday in Cornwall. Fortunately the Scheduler facility in Blogger is one thing that does seem to work...!  I have put together this collection of miscellaneous photos to give an impression of what my garden is like at this time. 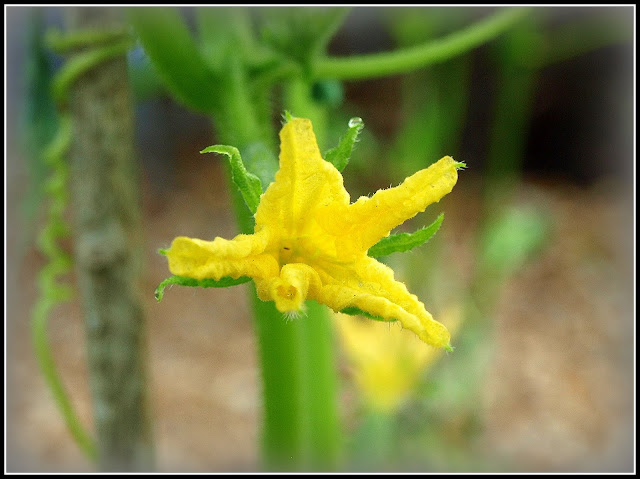 My potatoes are still far from finished. Maybe I over-did things a bit this year, with so many pots of potatoes? I still have a few pots of the Earlies. I only harvest them when we need them, so they are remaining in their pots for the time being. But I also have some Pink Fir Apple on the go, and they are an "Early Maincrop" variety, so will probably be ready at the end of August: 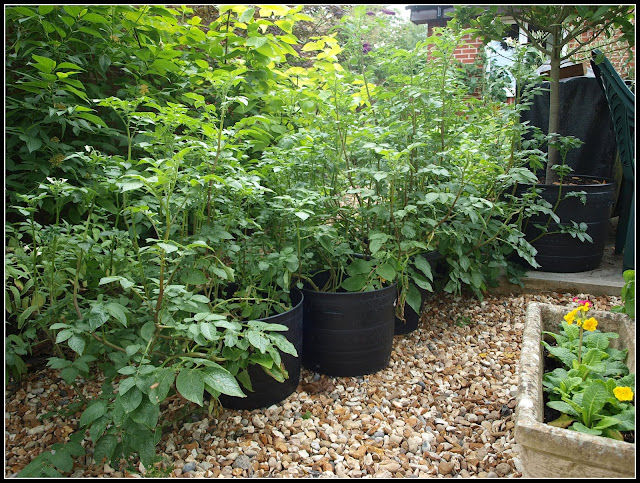 ﻿
Their foliage is very luxuriant this year, which hopefully is a sign that there will be plenty of tubers down below. The flowers are fully open now, which is usually taken to mean that the tubers will be of a viable size by now. 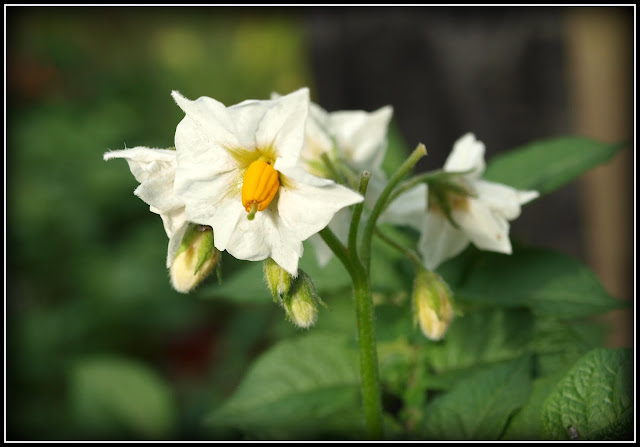 The Maskotka tomatoes in the raised bed are ripening now, and the cucumber plants have shot up. Some of them are nearly up at the tops of theit supporting sticks (which are about 6 feet above soil level). So far I have harvested about 5 cucumbers, all from the same plant, but there are lots of small ones forming on the other plants too now. 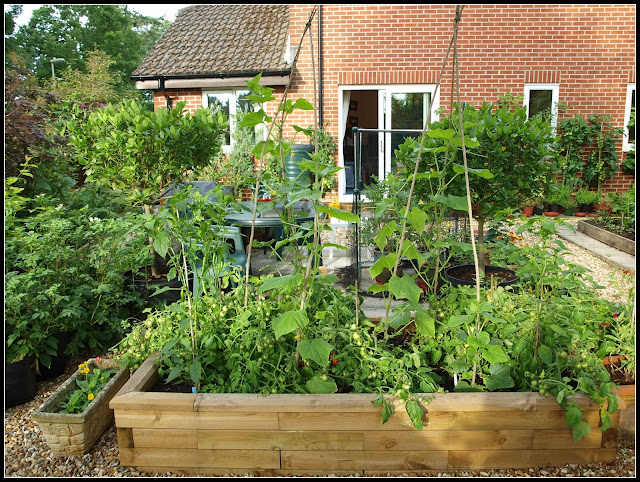 You can't really see them in that photo, but there are Sweet Pepper plants at each corner of the raised bed, and each of them has several fruits on. I'm planning to dry them when they are ripe to make paprika.

My Strawberries have finished now, with the exception of the Alpines. These, as I knew they would, have only produced a tiny crop, but the fruits are amazingly delicious! All the flavour of a traditional Strawberry concentrated in a fruit about a quarter of the size. 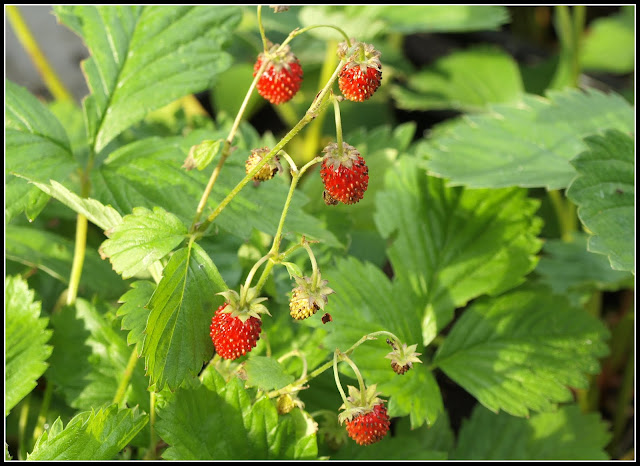 Many of the Tomatoes are turning colour now, although the only fully ripe ones so far have been Maskotka and a few Sungold. 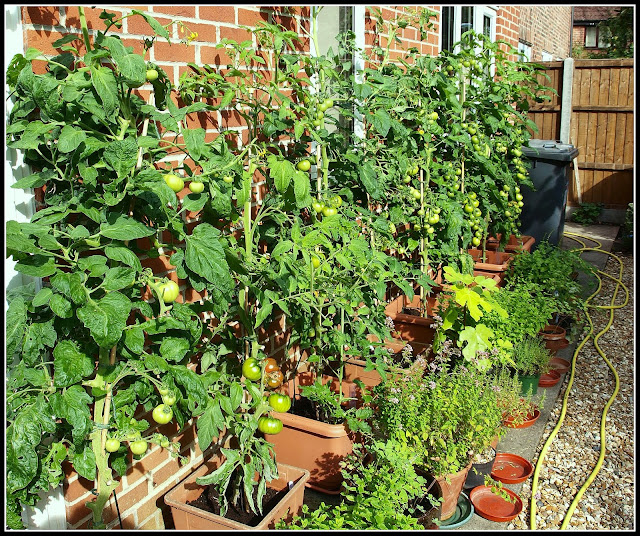 This one is Cherokee Purple: 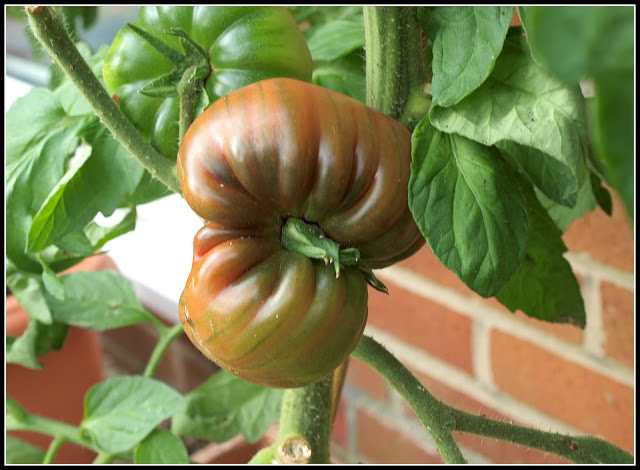 Before heading off on holiday I pricked-out a load of Endive and Radicchio seedlings for Autumn salads. I don't have any space available in the raised beds just now, so they are temporarily going to have to live in pots: 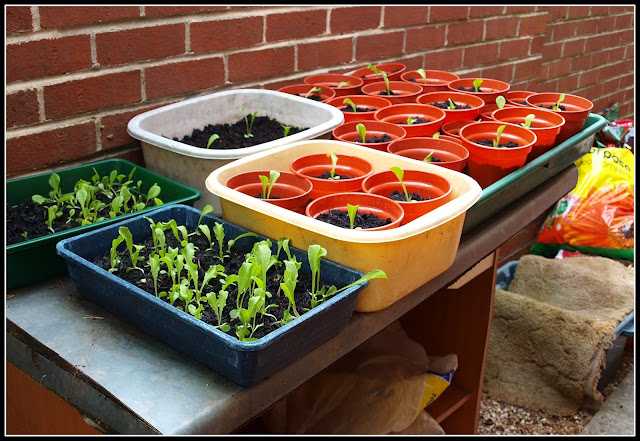 Talking of which... I'm not planning to be short of salads in the Autumn. In the forground here you can see several types of Lettuce seedling: 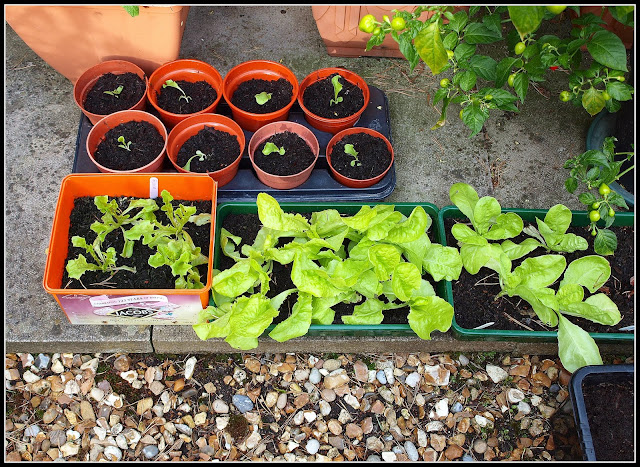 And here is one of the trusty washing-up bowls playing host to five "Little Gem" lettuces. These ones are small enough to be raised to maturity in a container, whereas the bigger varieties (e.g. "Webbs Wonderful") need a lot more space. 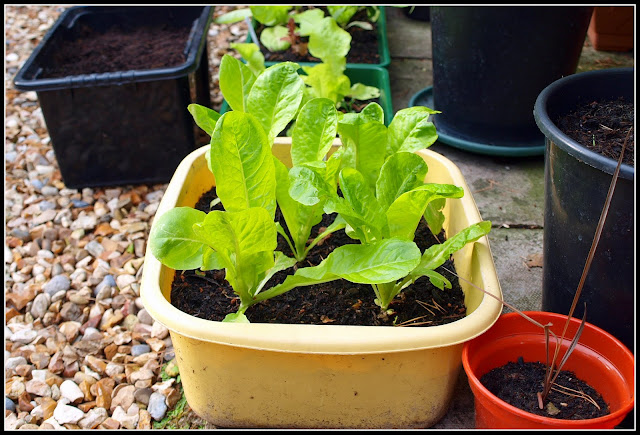 As soon as space becomes available, I will slot in a few Lettuces / Endives / Radicchio wherever I can. In the two big pots which until recently housed my peas, I have sowed two different types of Salad Leaves mix. 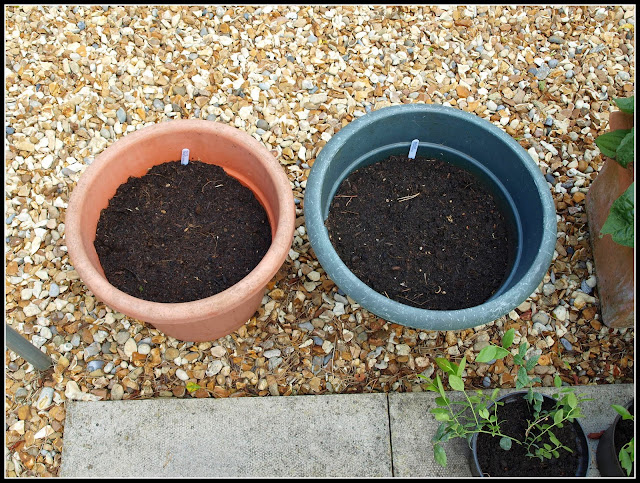 I am using the same compost as I used for the peas, since the very quick-growing salads will not require a huge amount of nutrients. If they look as if they are struggling I can always give the a dose of Miracle-Gro or something.﻿
Posted by Mark Willis at 16:00