My experience with growing carrots has hitherto not been crowned with glory. Most often the Carrot Root Fly ﻿did so much damage that the crop was very sparse. So much so that I gave up growing carrots altogether. Even when I covered them with Enviromesh they didn't do very well. I felt that the mesh prevented enough light getting to the veg underneath, and it was hard to apply the correct amount of water. And then I won a tall wooden planter, and my fortunes changed. 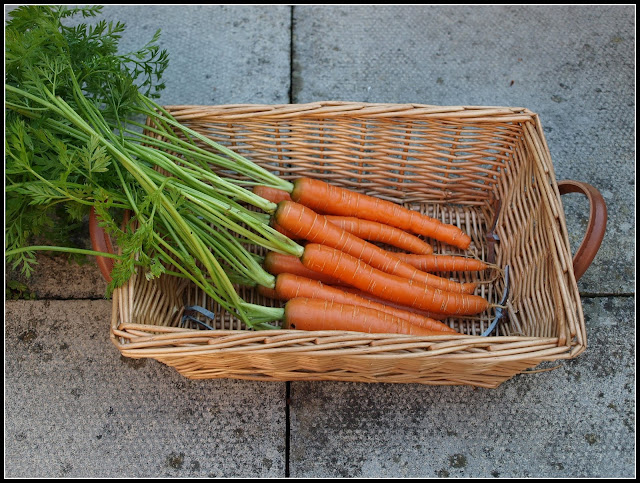 The planter enables me to grow carrots about three feet above ground level, thus avoiding the worst of the low-flying flies. It's not 100% effective, but still much better than anything else I have tried. I sow the carrot seeds into black plastic crates, two of which which fit neatly into the planter. This means that I can replace them whenever I need to. Last year I over-wintered the Strawberries in it. 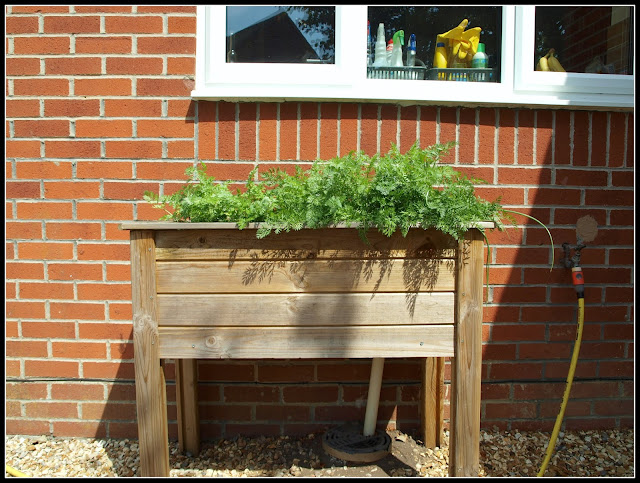 I started growing carrots this way 3 years ago. The first year I had modest success (I considered that anything was better than nothing); last year the crop was poor because of the dull wet conditions during Summer, but this year it has all come good. I sowed three different types of carrot seed, all miniature / fast-growing types rather than maincrop ones, simply because space is so limited. I chose "Mini Finger", "Mignon" and "Amsterdam III Sprint". One of the boxes had just Mignon, but the other box had a mix of the other two types.

"Mignon" produced a very small amount of foliage and I though it wasn't doing very well, but when I pulled the first one to see what they were like I was pleasantly surprised. There was a lovely crop of short plump carrots:

They were also the first to mature. Sown on 29th March and first ones harvested on 13th July.

In retrospect I realise that the ones I labelled in a previous post"Amsterdam III Sprint" were more likely "Mini Finger". They are very long and slender. (Like a pianist's fingers maybe!)
﻿
﻿
Now I have harvested the first carrots of the third variety, which I'm pretty sure is "Amsterdam III Sprint" (Yes, I know I have said that before...)

These ones are the biggest of the three types - almost big enough to be a maincrop type. Again, I was surprised to see how big they were: from above they don't look much, when when they come out of the ground they are bigger than I had dared to hope. 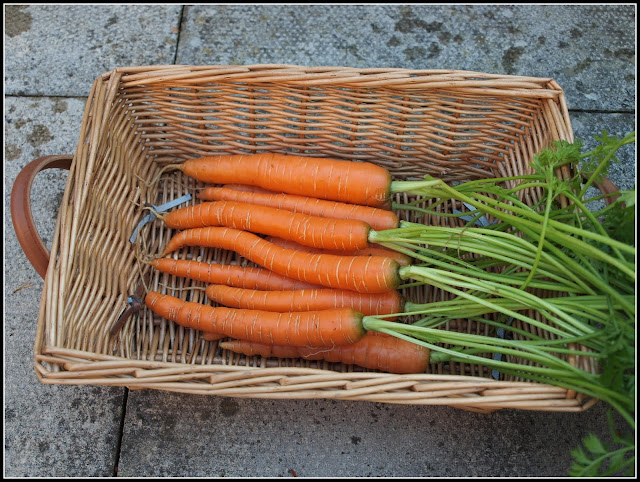 ﻿
As my photos demonstrate, the carrots have all been well-nigh perfect. There have been literally a couple with a bit of fly damage, but not enough to be significant. I seriously believe that my success with these carrots is due to their elevation. They were not protected in any other way, and they were grown in perfectly normal proprietary compost. I think that the weather may have played a part (it usually does). Perhaps the very cold conditions in the Spring meant a late arrival for the flies, and the warm sunny weather during July helped the carrots to grow strongly and get big. Whatever the reason, I consider this year's carrot crop to have been a huge success.
Posted by Mark Willis at 16:00