This is another dish inspired by Yotam Ottolenghi. It is a variation on the recipe "Poached chicken with sweet spiced freekeh" ("Jerusalem", page 182). I have never seen freekeh on sale here, so I have used bulgur instead. 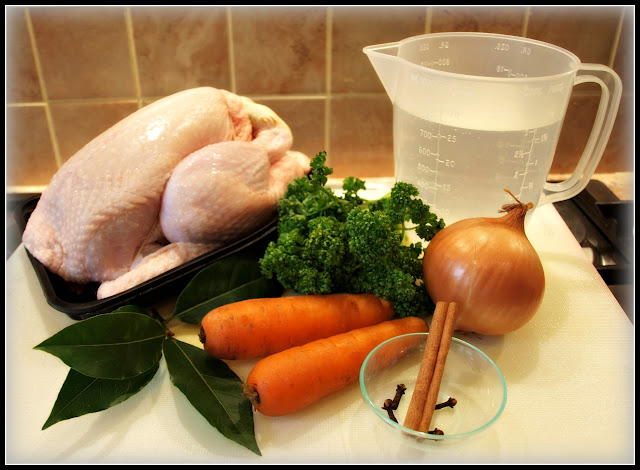 My recipe is so similar to Ottolenghi's one that I can't claim any originality, and I am not going to give the details of the recipe (you really ought to buy his book if you haven't already got it!), but  I will describe it in outline. It's incredibly easy to do, and would no doubt respond well to many variations on the vegetable content and the spicing.

I put a whole small chicken in a large deep pot, along with an quartered onion, two peeled small carrots, a few sprigs of Parsley, two Bay leaves, a cinnamon stick, four cloves and about half a teaspoonful of salt. Then I covered it with water and cooked it slowly (on the hob, with the pan covered) for about an hour or so, until the meat was very tender and beginning to fall off the bones. 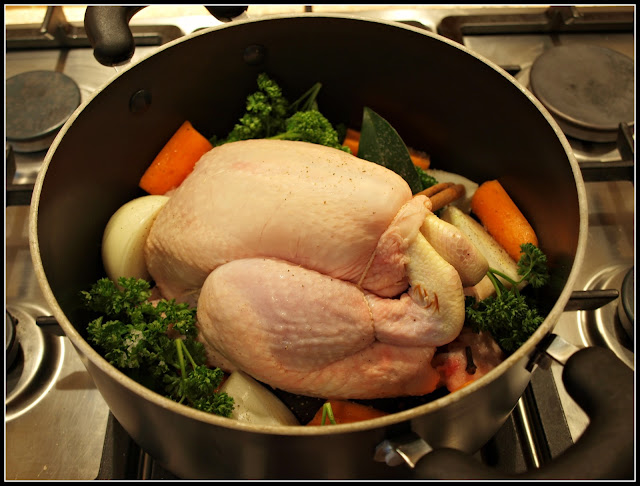 I made the bulgur dish in a way similar to Ottolenghi's freekeh: fry some onions along with ground coriander and allspice, and add them to the bulgur. Then pour in some of the broth in which the chicken was poached, add a knob of butter and a handful of dried fruit such as raisins or currants, cook it for a couple of minutes and then leave it to stand until all the broth has been absorbed and the grains are plump and soft. 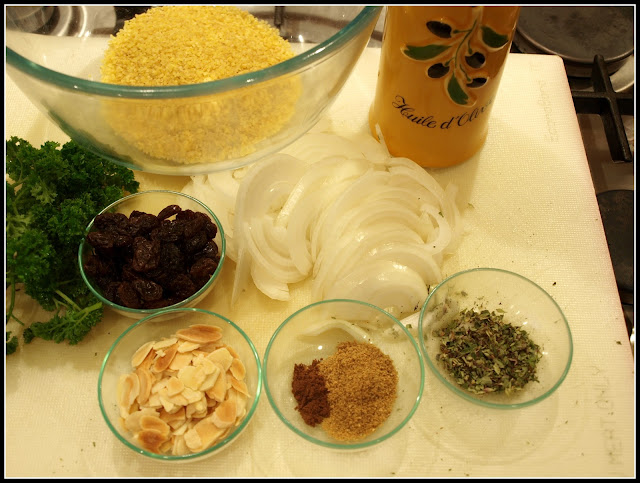 Meanwhile I made a tomato sauce. This is not part of Ottolenghi's recipe, but I just felt that it would be appropriate. I simply drizzled a few halved tomatoes with olive oil, sprinkled them with salt and then roasted them, along with a few cloves of garlic. 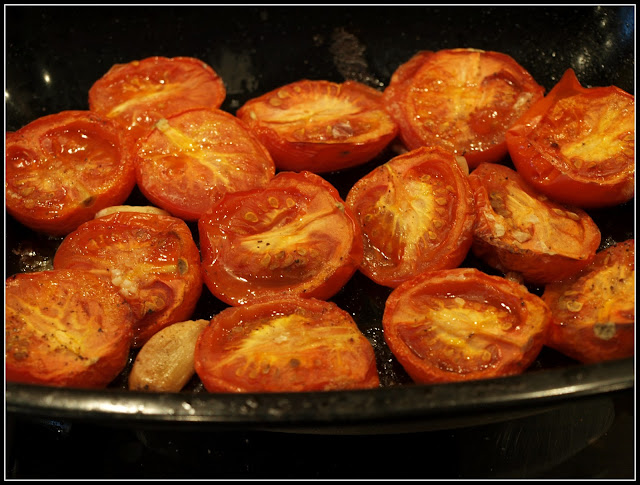 When they were done I blitzed them in the food-processor, until they formed a fairly loose but fairly smooth sauce. I did this in advance, so it had to be warmed up before serving. 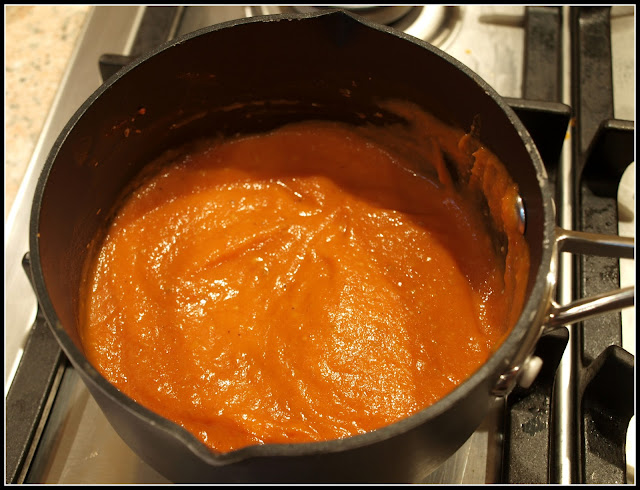 Yes, it does look like a pan of tinned soup, but I can assure you it didn't taste like one! BTW: I added a squeeze of tomato puree to boost the colour a little. It's really strange how the tomatoes, which look really red when they come out of the oven, go very pale when they are blitzed.

To serve the dish:
1. fluff up the bulgur with a fork, and then arrange it in suitable (wide, flattish) dish
2. carve the chicken - or simply pull the meat off the bones if it is tender enough - and arrange it on top of the bulgur
3. pour the warmed tomato sauce on top
4. garnish with chopped parsley and toasted flaked almonds
5. serve with a nice green salad - crunchy Cos lettuce would be good, as would Lebanese cucumbers. I used a couple of little Endives from my garden. 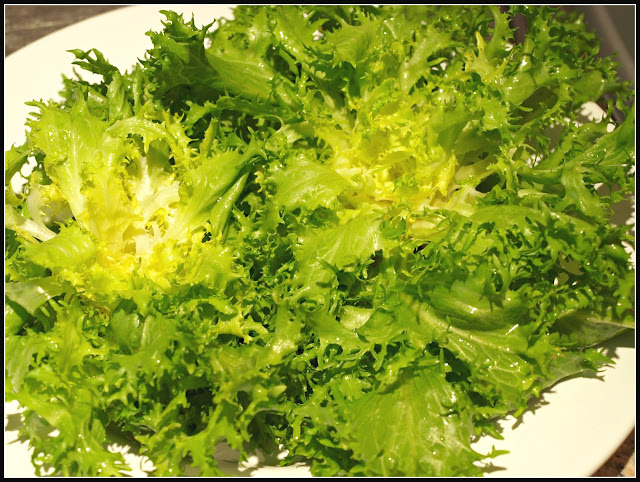 I think the key to success with this dish is the spicing. Too much cinnamon, allspice etc, could spoil it, but just the right amount makes it wonderfully fragrant. You have to judge this for yourself. Some people like more than others.


Just like all the other Ottolenghi recipes I have cooked, this dish turned out really well, because the recipe is derived from real food, as eaten by real people, not something artificial contrived just for a fancy cookbook. It was a beautiful combination of textures and flavours. The poached chicken was moist and flavoursome, and the soft sweetly-spiced bulgur was nicely offset by the crunchy toasted almonds. My own improvisation, the tomato sauce was (though I say it myself) inspired. The tomato flavour was very intense, and it had just the right amount of garlic. It also added a vivid splash of colour to a dish that could otherwise have been a bit dull in appearance. 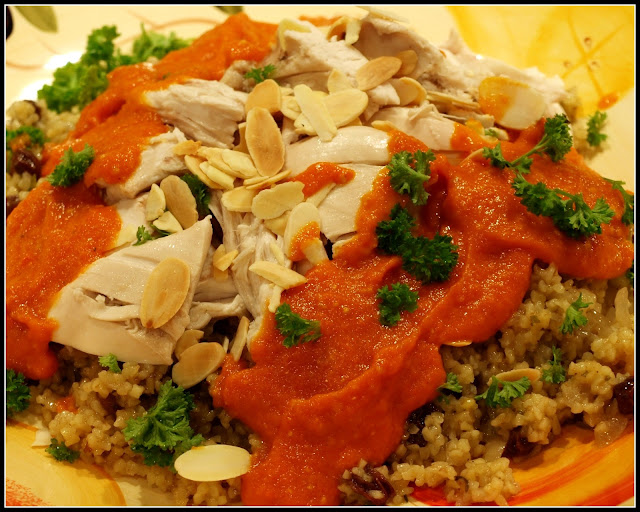 There was a bonus at the end of this meal: there was a lot of meat and broth left over, so this was the basis for a lovely soup next day - but that's another story!
Posted by Mark Willis at 16:00