All my plans for a major seed-sowing session this weekend have been scuppered by the weather. Much as I would like to do so, it is really not suitable weather for sowing seeds outdoors. Our daytime temperatures have struggled to get into double figures, and at night-time they have been several degrees below zero - for weeks now. And despite the fact that our clocks have gone forward an hour today, taking us into British Summer Time (who do they think they are kidding?) the light levels are still very poor indeed, so windowsill-raised seedlings are not likely to do well. So what to do? 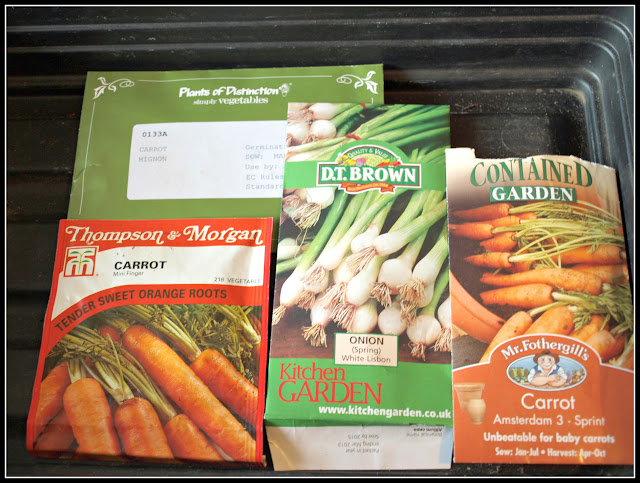 Many of you will know that I got a Grow Light House as a birthday present the other day, and it is certainly "fully booked", but in current circumstances I could do with three or four of them! But even if the growlights help me to produce some good seedlings, when will I be able to plant them outside? I have decided that the only thing to do is to assume that the weather WILL change some time during April, and plan accordingly. If I don't even sow seeds until the weather warms up I will probably be planting my seedlings in July! Having made this decision, I have begun sowing seeds in some containers - indoors. Well, to be exact, in my garage. 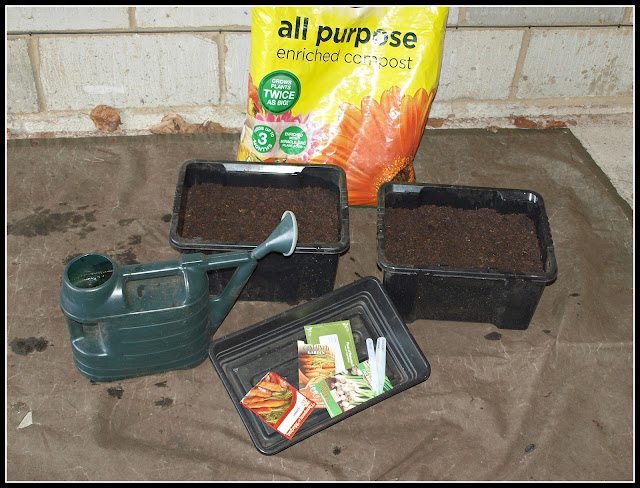 The garage (which is part of the main structure of my house) is too dark for growing things properly (it has only one window), but it will be OK for germination. The temperature in there is nowhere near what it is inside the house itself, but it is certainly many degrees warmer than outside in the open air. I'm just hoping that by the time my seeds germinate the weather will allow me to put the containers outside.

Today I filled two large plastic boxes with compost and sowed into them seeds for three different types of finger carrot - "Amsterdam 3 Sprint", "Mignon" and "Mini Finger". I sowed the seeds fairly thickly, and I will need to thin them later, when I see how good the germination rate is.


These are varieties of carrots specially bred to be small. They are the type that is often eaten raw as a salad ingredient, although they are also very nice cooked. Their big advantage is that they generally mature in much less time than maincrop carrots - although this wasn't true last year! In amongst the carrot seeds I sowed a small number of Spring Onion seeds too (White Lisbon). This is because I have read that onions may repel Carrot Root Fly. I'm not convinced of this, and won't be relying on this method alone, but anything that even contributes towards the deterrence of Carrot Root Fly is welcome.

This is the end result. Nearest the window is my little Fig tree, waiting to be potted-up into a bigger container. Then seed potatoes, chitting. Then the black plastic boxes with the Carrots in, raised up on top of some empty plastic planters. 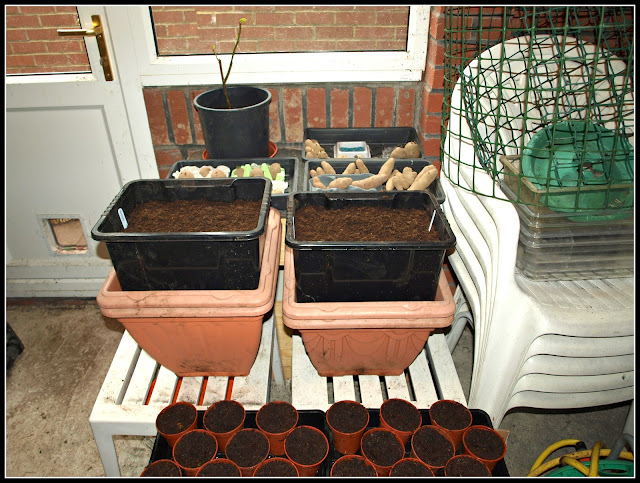 ﻿You can tell that the carrots are never going to be satisfied with the level of light they will receive in that position, but I sincerely hope that their residence there will be of short duration!
Posted by Mark Willis at 16:00