I make no apology for writing again about Bordubet. It is a place full of interest, with photo opportunities galore. This post is about some of the edible plants I saw. If only they were in my own Veg Plot!

Very early on in our stay at the Golden Key, I went to inspect the vegetable garden. I was particularly interested to see how it compared with the previous year. The first thing I saw was that there were LOADS more chillis than before. Chillis practically as far as the eye can see!

They had a completely different set of chilli types this year. Many of them were more towards the Sweet Pepper end of the capsicum scale than the Chilli one. The plants were extensively hybridised, and I saw that many plants had fruits of several completely different shapes and sizes on them. Some were the long thin, pointed type 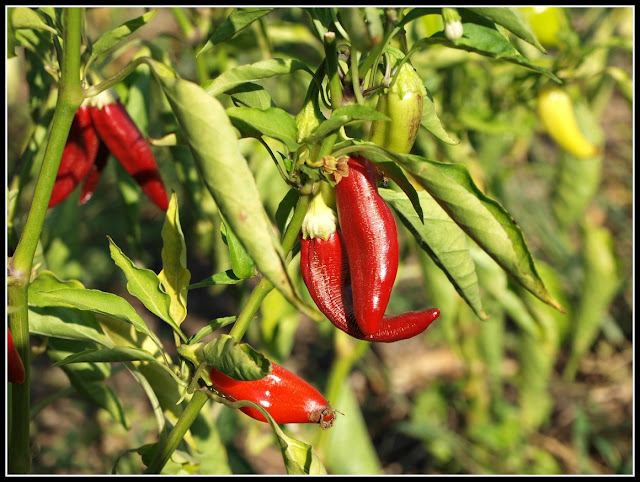 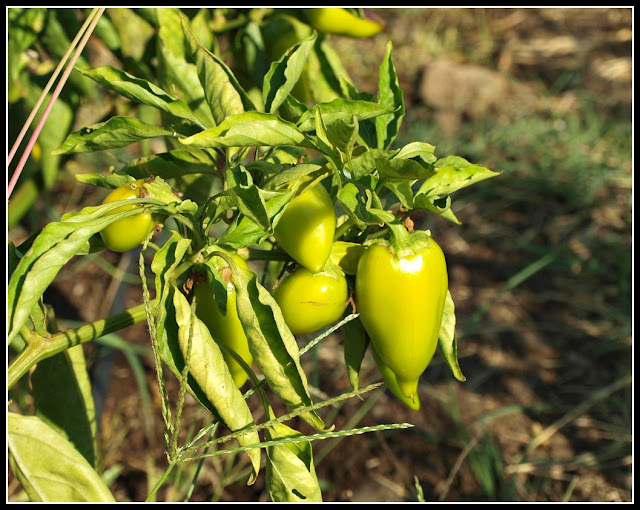 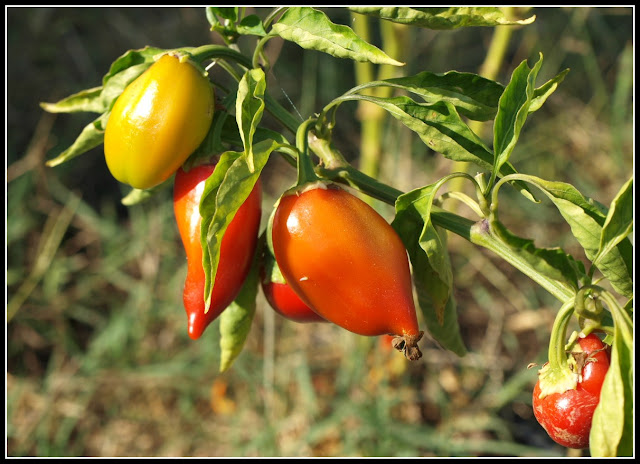 This is a selection of the different types, displayed for maximum visual effect on the blue cover protecting the hotel's table-tennis table! 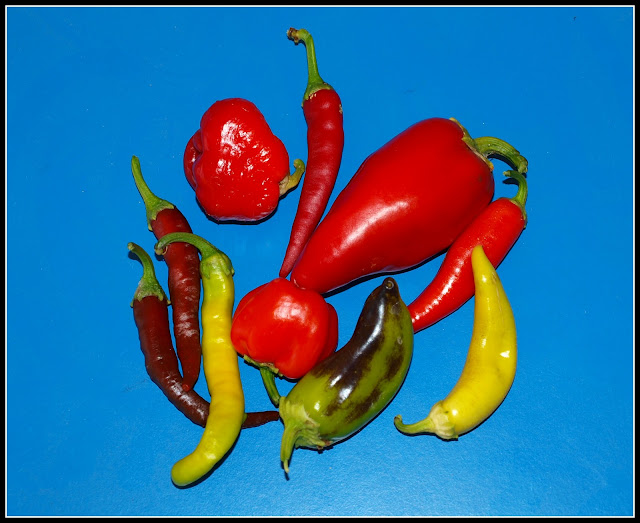 Incidentally, in case you think I was stealing these fruits, there were actually signs encouraging you to pick them - though only as much as you needed, which was very sensible. As it happens I suspect that hardly any of the hotel guests venture into the vegetable garden at all, let alone pick the veg. 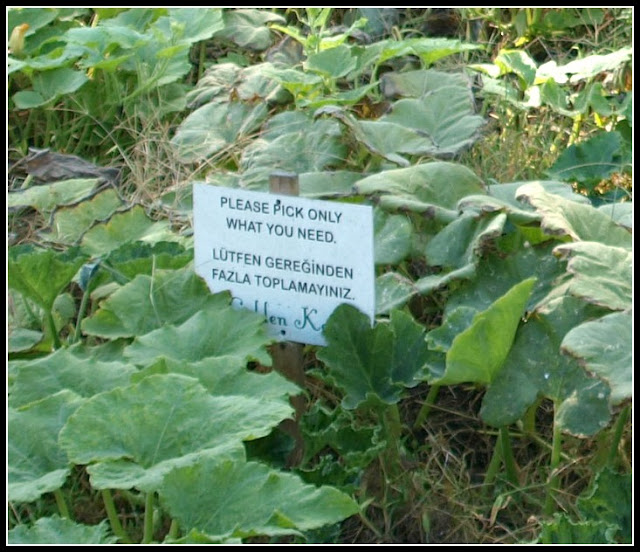 In the garden there were also lots of other fruit and veg plants, including my current favourite, the fig. The fruit of this particular variety is a golden yellow colour when ripe, and the inside is deep pink. I picked one and ate it there and then, warm from the sunshine. Pure joy! 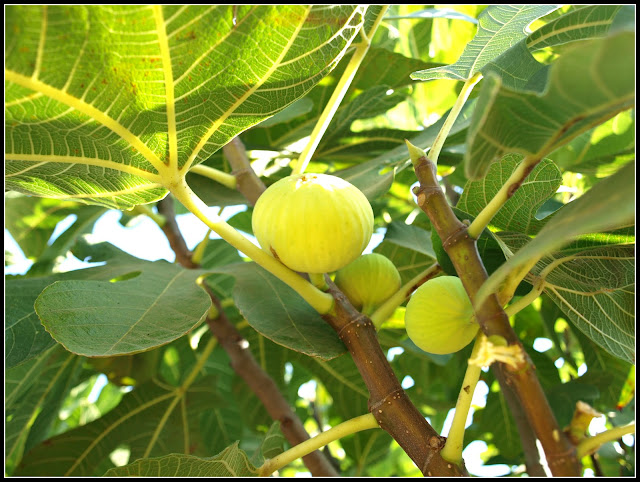 This is a Pomegranate tree, laden with fruit. I'm not a great fan of Pomegranates, and anyway the fruit wasn't totally ripe, so I didn't pick any of these. 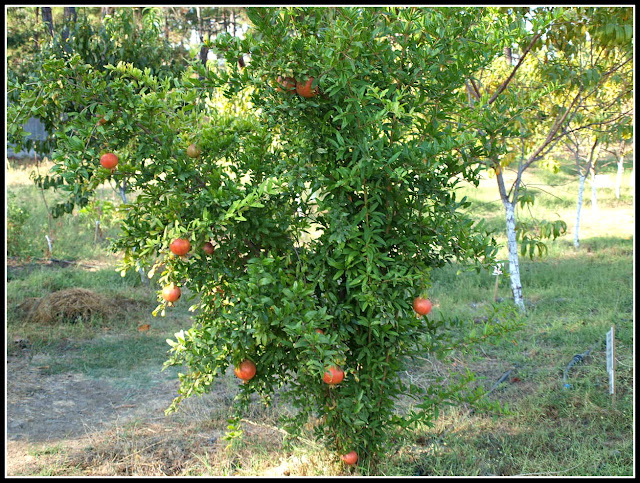 This is more my line of country. Aubergines that look very much like the "Pingtung Long" ones I have been growing in my own garden. 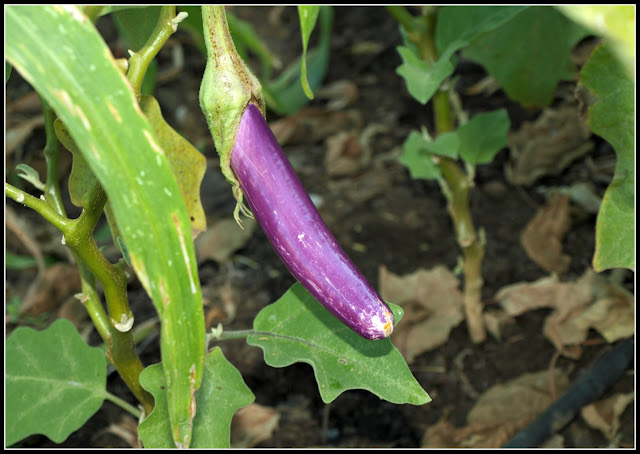 The Basil was perhaps a bit past-it, mostly covered in flowers, though still powerfully fragrant. 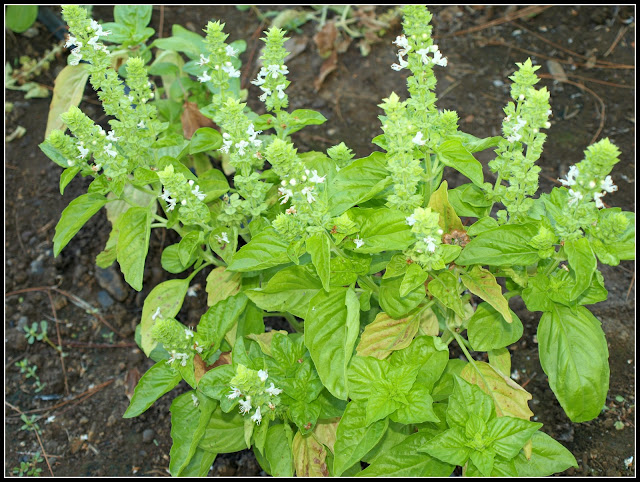 The Pumpkin patch was a bit smaller this year, with only one or two fruits visible. I don't recall having any food dishes this time that included Pumpkins or Squash, which is a shame because I remember having had a really good Pumpkin soup last year. [The star soup this year was a Lentil one, made much thinner than we would normally do, so eminently suitable for the warmer weather conditions.]

There were also one or two Marrows, but they looked a bit neglected, and were probably not destined for the kitchen. 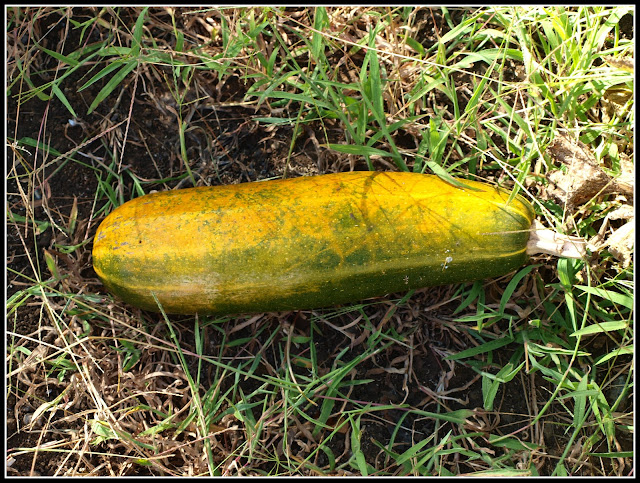 In a "schadenfreude" sort of way, I was pleased to see that the Sweet Corn wasn't particularly impressive. I say this only because my own attempt at growing Sweet Corn was a pathetic failure...

Their olives are better than mine though: 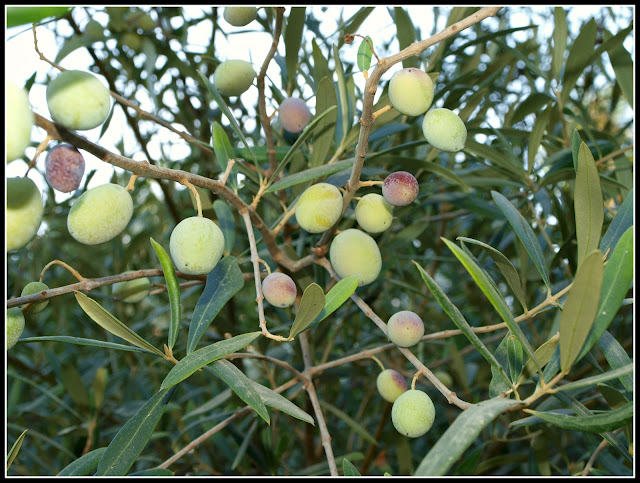 Incidentally, one of the things we like about booking our holiday through Exclusive Escapes is that they give you lots of "freebies" - including a very nice beach towel in a different design every year. And a bottle of fine Olive oil to bring home with you, safely packed in a robust cardboard tube to prevent damage in transit. They think of everything! [I should say here that I have no commercial or sponsorship connection at all with this company - I just think they deserve some credit for providing such a good service.]

Throughout the hotel grounds there are numerous trees of the citrus family, such as oranges, lemons and kumquats. One of the (still green) oranges did 'accidentally' find its way into a few glasses of the Duty Free bottle of Rum that we took with us...and very nice it was too - perhaps even nicer than lime, which is the traditional garnish for rum.
﻿
﻿ Readers of Jane's blog The Competition Grapevine will recognise this. It's a vine that climbs its way up a big pine tree in the hotel garden, currently laden with sweet juicy grapes. Yes, I did try them. Nice and sweet, but not seedless. 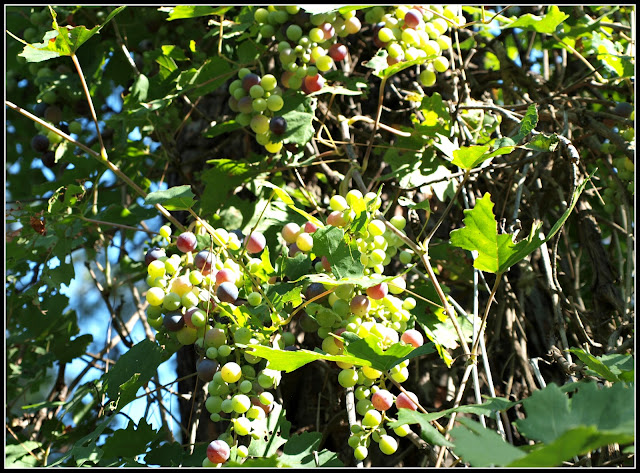 My final picture for today was not taken at the hotel at all, but on a day trip. However it shows a plant that is widespread in the part of Turkey that we visited - the Prickly Pear cactus. I have never eaten one of these fruits, but I would like to do so one day, just to see what they are like. Have any of you tried them?

Holiday trips abroad are a regular source of gardening inspiration for me. Do you find the same?
Posted by Mark Willis at 17:30