This year my tomato plants have been plagued by the blight, but despite this I have managed to get quite a considerable harvest from them.

Even after using huge large quantities of tomatoes in all sorts of ways (including a large batch of sauce which is now in the freezer for Winter use), there is still well over 6kgs of fruit ripening in the Dining Room: 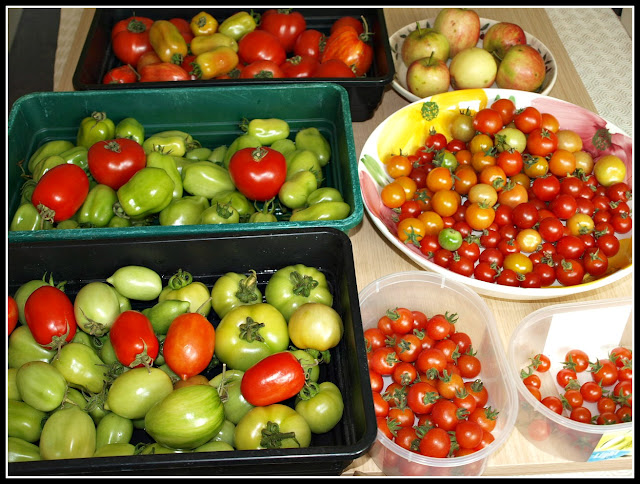 Even though the yield has been much reduced because of the blight and the poor weather, I think my plants have done well. I had a total of 13 plants, of 10 different varieties. In order to "sing their praises" a bit I am posting here a picture of each type:

Ferline: good yield, though not on a par with Orkado. Medium to large-sized, slightly ribbed fruit. Reasonably blight-tolerant.
﻿
﻿Speckled Roman. A bit of a disappointment. Striped red and yellow fruits look nice, but there weren't many of them. Rather frail plants, which succumbed quickly to the blight. Fruits have few seeds, so very suitable for making sauce.
﻿
﻿ Roma. A traditional "paste" tomato, mainly used for cooking into sauce. Average in all respects. Modest yield.


Incas. Another plum tomato, rather like Roma. Attractive, distictively-pointed smooth fruits, very pale green right until the last moment before ripening to red.


San Marzano. Distinctively blunt, block-shaped  fruits. Firm flesh, few seeds. Good for cooking. The most prolific fruiter of my four plum tomato types, but set its fruit very late so lost many of them to the blight.

Sungold. Very prolific fruiter. Loads of cherry-sized orange / gold fruit. Very tasty. In fact the best of my types in terms of taste.

﻿Losetto. Mostly fairly unimpressive. Many fruits, but very small, and skins were tough. Recovered well after being "on death's door" because of the blight.

Lizzano. Very similar to Losetto in most respects. In fact I'd be hard pressed to tell them apart!


Next year I think I will probably grow more examples of fewer varieties. Definitely I'll try to get "Orkado" again, though I may not be able to find it since it was billed as an experimental variety. I hope it becomes widely available.

Note: all my tomatoes were grown from seed, and grown outdoors.
Posted by Mark Willis at 17:30