Since we had a generally mild Winter this time, most of my herbs have survived and are now experiencing a burst of new growth. It is sometimes surprising how resilient some of the so-called Mediterranean plants cope with cold conditions.

I had thought that Greek Oregano might perhaps not take kindly to Winter conditions in the UK, but it has positively thrived on them! In 2010 I grew several plants of Greek Oregano from seed (aren't the seeds TINY?) and they have all done really well. I have four pots of the stuff now, as well as a few plants in the open soil (grown from seedlings I could not bear to destroy once I had filled the pots). Although I like Greek Oregano, this is probably more than I really need. However the bees and butterflies love it so I'll keep it all. 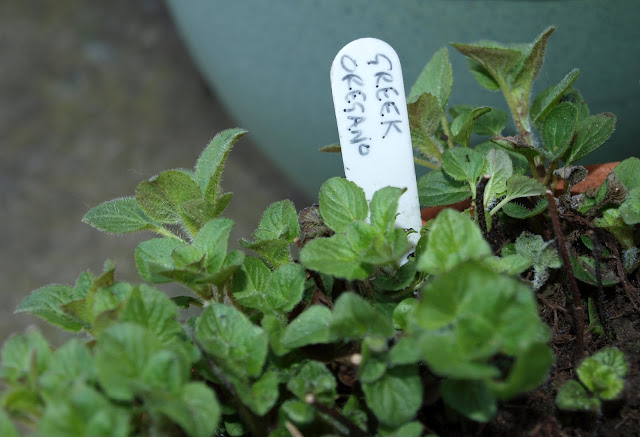 This year I have not re-potted the Greek Oregano plants, I have simply topped-up their compost. 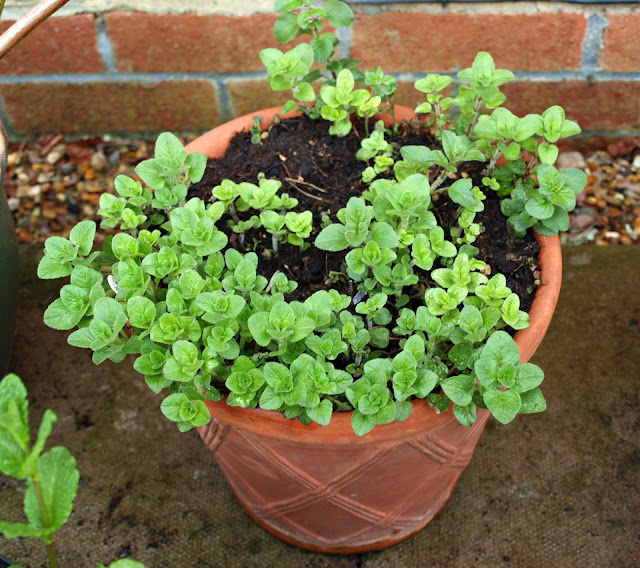 This one is growing in open soil - and doing very well by the look of it. 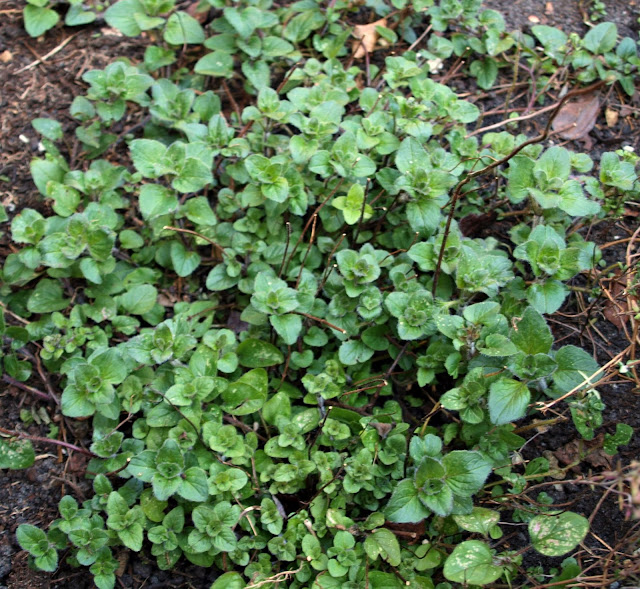 I really love Oregano. It has such a warm flavour. I like Oregano in meat sauces for with pasta; I like olives steeped in Oregano-flavoured oil; I like Mozarella cheese smothered in chopped Oregano; I like Oregano any way it comes!


Lemon Balm (Melissa) is another one of those herbs that will survive pretty much anything you throw at it. I keep finding new self-seeded plants all over the garden. It's not a herb we use for culinary purposes (although you can), but I grow it because the insects like it. When it is mature, the plants are rather dull and straggly, with indivdually-insignificant flowers, but the young plants have deeply-serrated glossy green leaves with a rather appealing wrinkled texture. After the plants finish flowering in late Summer I cut down the main stalks. The following March or April they spring back into life once more, with luxuriant green growth soon hiding the woody brown remains of last year's flower stems. 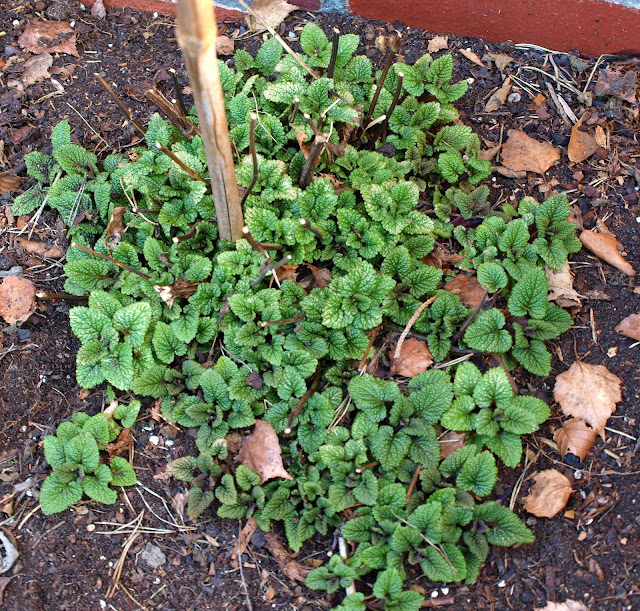 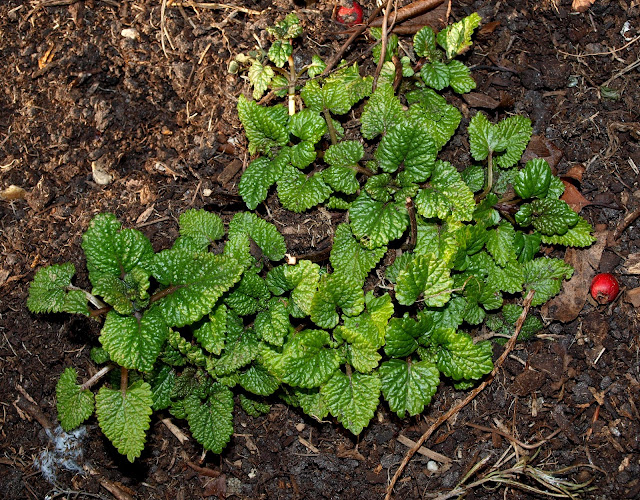 ﻿Down at the bottom of the garden I have a couple of Bronze Fennel plants that have lived for many years now. They die right back in the Winter, with only a few hollow dry stalks and raggedy yellow leaves remaining, but at this time of year they begin all over again. 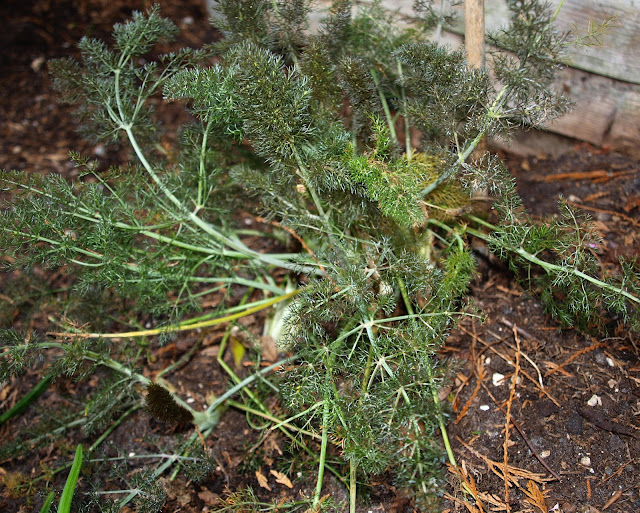 Here's a close-up of a new "bottle-brush"-shaped Fennel frond (seen also in the pic above, at bottom left): 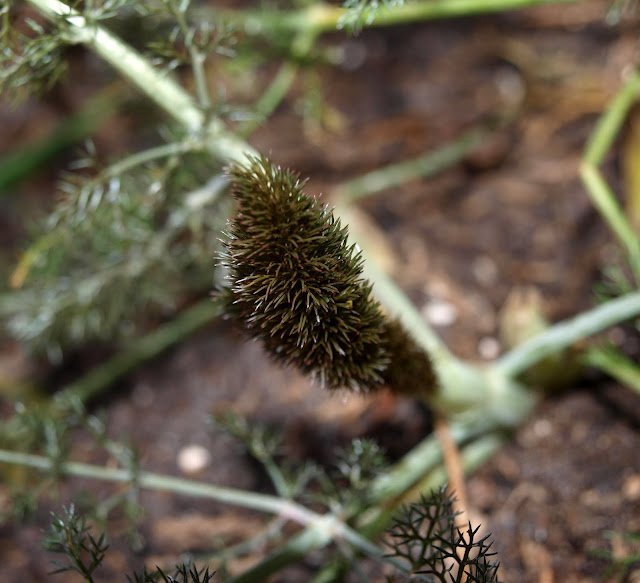 This type of Fennel is essentially ornamental. It doesn't produce swollen stems or "bulbs" like the Florence Fennel and I don't pick the leaves either, although they are edible. I sometimes harvest some of the seeds in the Autumn.

My two oldest potted Sage plants were replaced a couple of weeks ago with younger plants grown from cuttings taken the previous year, which are a lot more vigorous. I find that Sage is comparitively short-lived and is best replaced every three years or so. Having said that, I do have one really ancient Sage plant that is inextricably entwined in the branches of a Philadelphus tree. It must be about 20 years old because I think I planted it not long after we moved into this house in 1991. 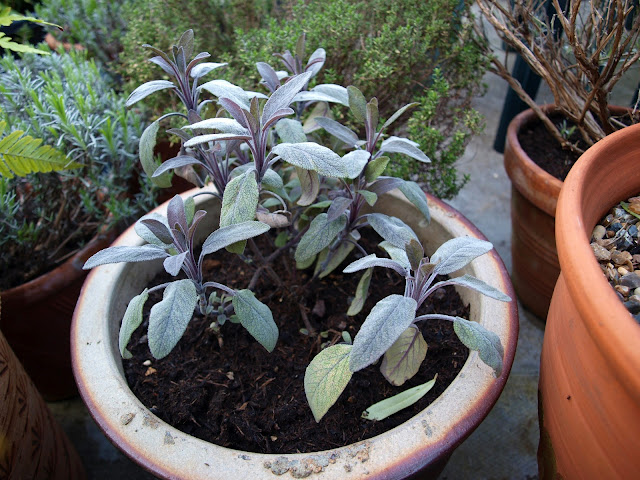 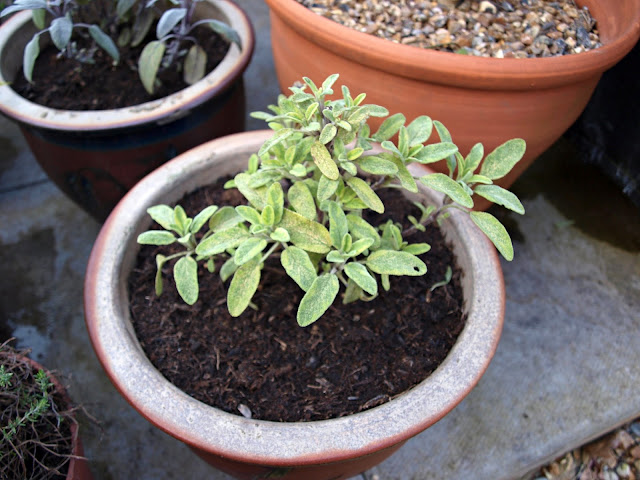 With the exception of the one plant in a pot that was killed by the frost, my Rosemary bushes are looking strong. This is an arty photo taken in the late afternoon, attempting to capture contrasts between light and shade, and there are some Rosemary bushes highlighted in a narrow shaft of sunlight. 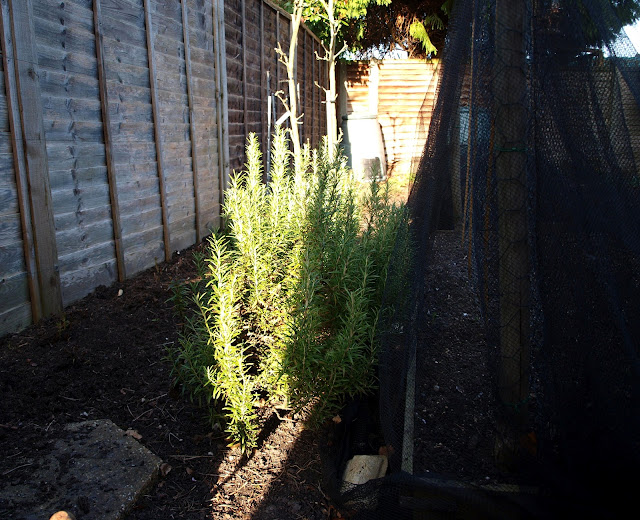 And here's a Thyme plant in similar conditions, with a few of the top spikes catching the last of the evening sun: 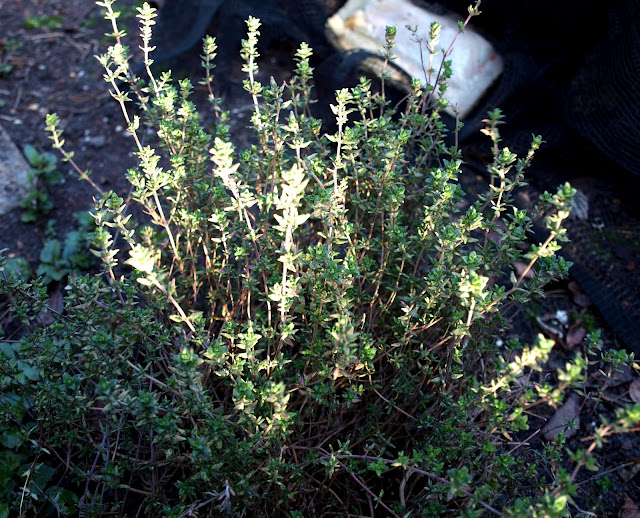 The Chives have already been cropped a bit, but they grow very rapidly, and I have four pots like this, which is plenty to keep the kitchen well-supplied. 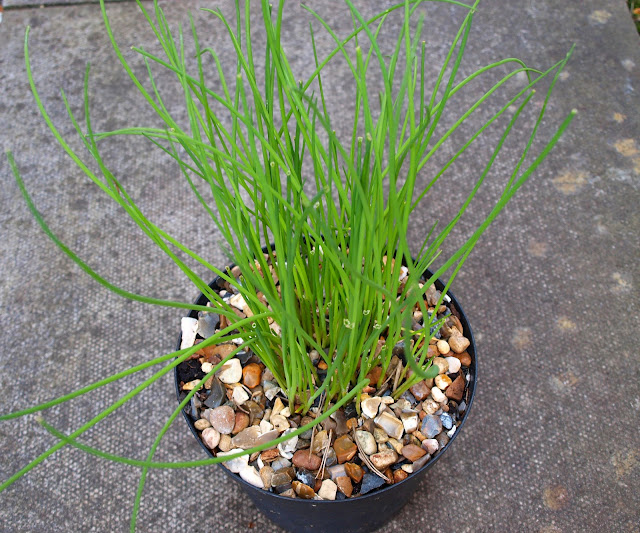 The gravel is to suppress the growth of moss, whilst conserving moisture. Chives enjoy damp soil.

Likewise Mint thrives in damp conditions. I have four pots of this too. It's Moroccan Mint -very tasty; just what you need for a nice Tabbouleh. 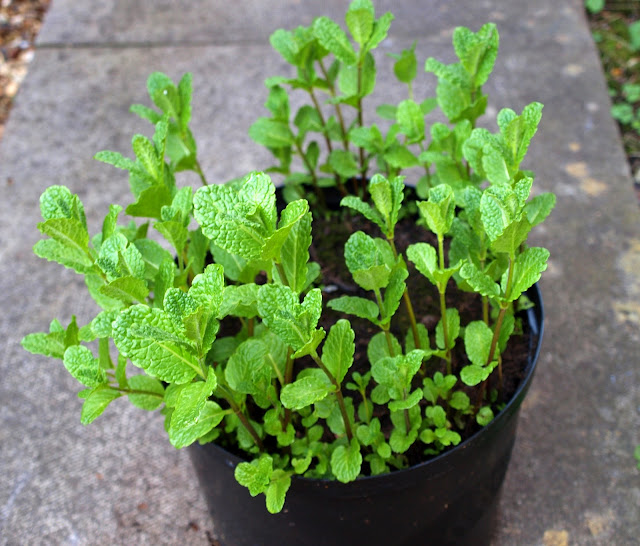 Finally, the Winter Savory. It performs much like Rosemary or Hyssop, being hardy enough to survive the Winter conditions. You can see the little tufts of bright green new leaves appearing at the end of each stem: 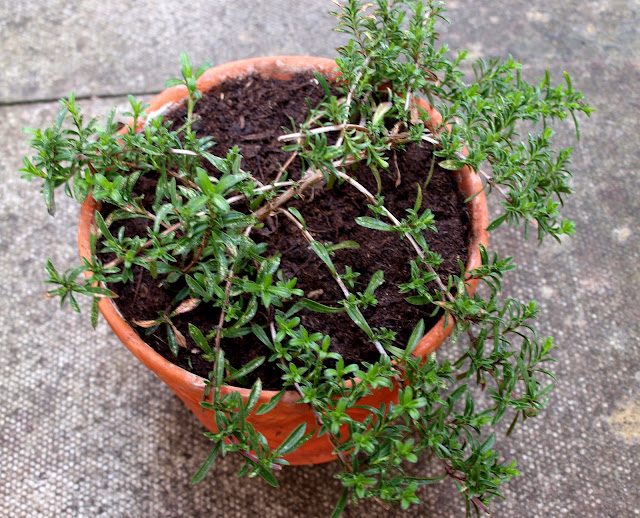 As you will have gathered, we are very fond of fresh herbs for culinary use. They are good things to grow if space is limited because a little bit goes a long way, and they are always expensive to buy. So they have an excellent VSR.
Posted by Mark Willis at 17:30