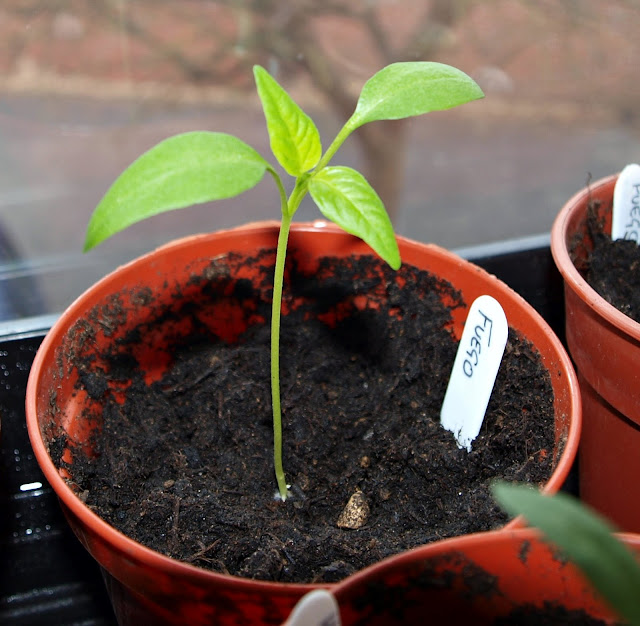 I sowed my Chillis on 25th February. Most of them germinated in little over a week. However one variety - "Amando F1" has done very badly. I sowed four seeds (two to a 7.5cm pot) but only one germinated. In theory I should leave them at least a month because peppers and chillis can sometime take that long to germinate, but if I do, they will be way behind all the others (or they might never germinate at all), so I have sowed another two. My aim is to have two plants each of four different varieties.

The plants are now between 5 and 7cm tall - and predictably a bit leggier than I would like, though they will probably be OK. I have thinned them to one plant per pot, discarding the weaker of the two seedlings. 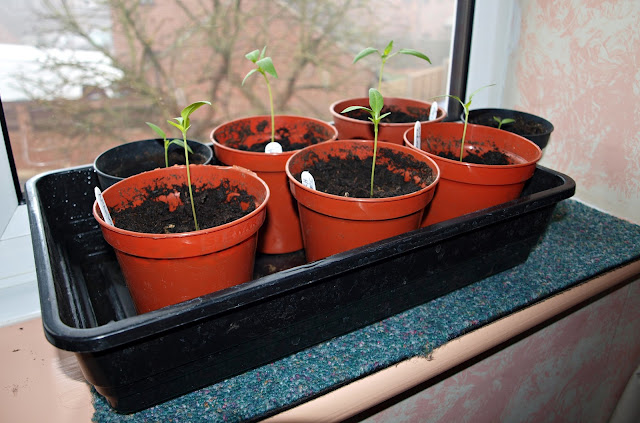 I am particularly pleased that some of the seeds I brought back from Turkey have germinated. So far, only two out of the eight I sowed, but two is all I need, so any more will be a bonus.

I'm doing my best to give these little ones as much light as possible, but it's not easy. Now that my Tomatoes have germinated too, I can no longer move the Chillis to the other side of the house at lunchtime! I think if we get any sunshine on a day when I'm at home and able to supervise them closely I will put them outside for a couple of hours, but still inside their propagators.

My plastic mini-greenhouses are already occupied, mostly with those wooden wine boxes I wrote about the other day. I have got Baby Leaf Salad in one, and Radishes in the other. Filling them with compost made me realise how much bigger they are than the old washing-up bowls I sometimes use. They took about half a bag each! 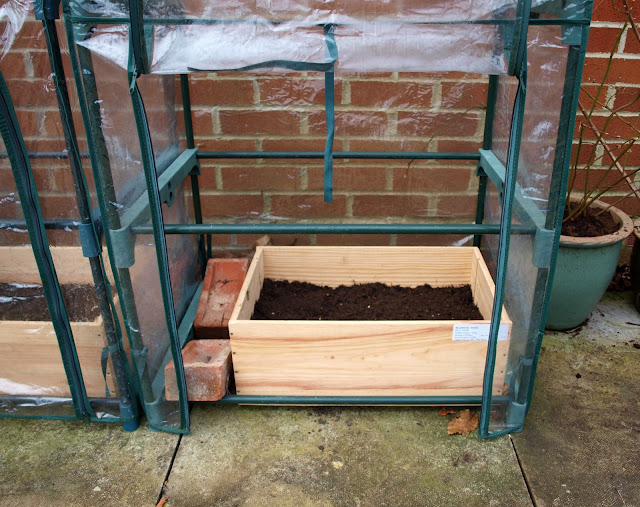 My plastic storage boxes have also been brought into use. As you can see in my next photo, two of them fit neatly into my big wooden planter. In one I have sown seeds for Carrot "Mini Finger" and in the other one I have planted my Strawberries. 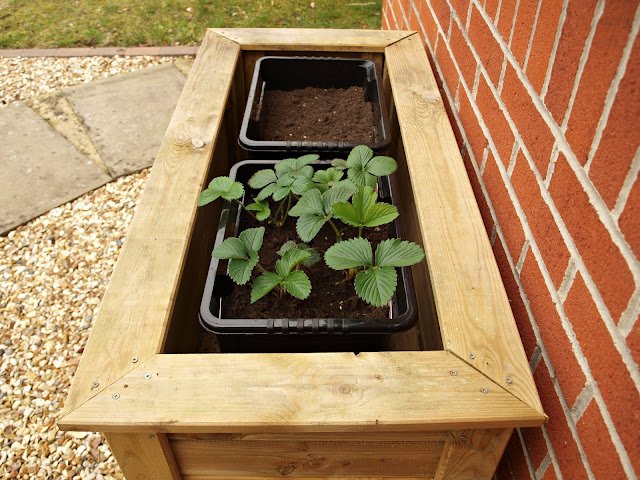 Meanwhile, out at the front, the Daffodils around the base of the Crab Apple tree are looking good now. All the Irises have died off though. 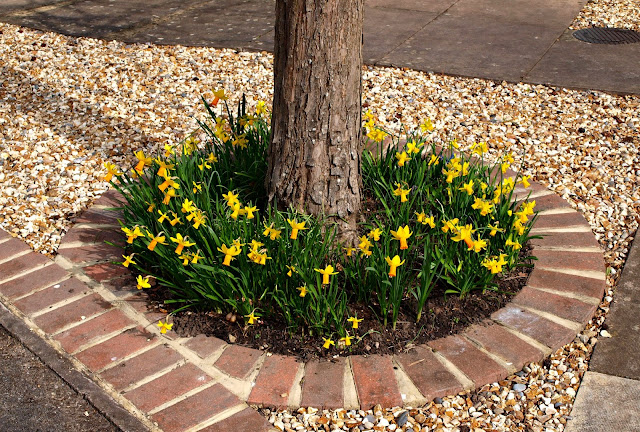 March and April are the chief seed-sowing months round here, so there's not much to see in the vegetable garden just now - mostly "potential"! 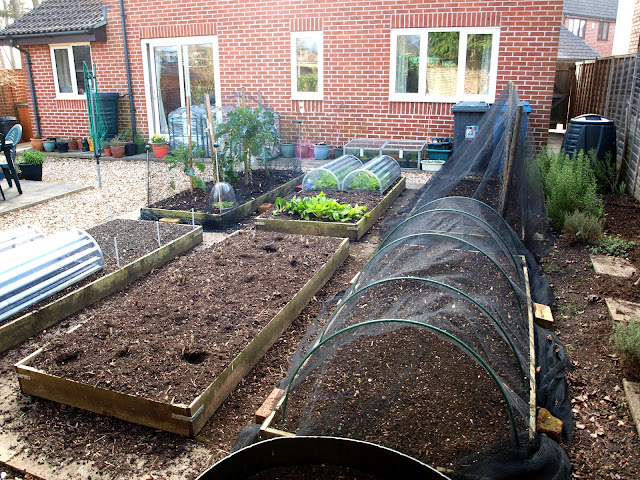 Just look at the mess the Blackbirds have made, scratching around in the compost looking for worms and bugs!

The bright green patch in the middle is the Swiss Chard and Perpetual Spinach, which is growing quite strongly again. 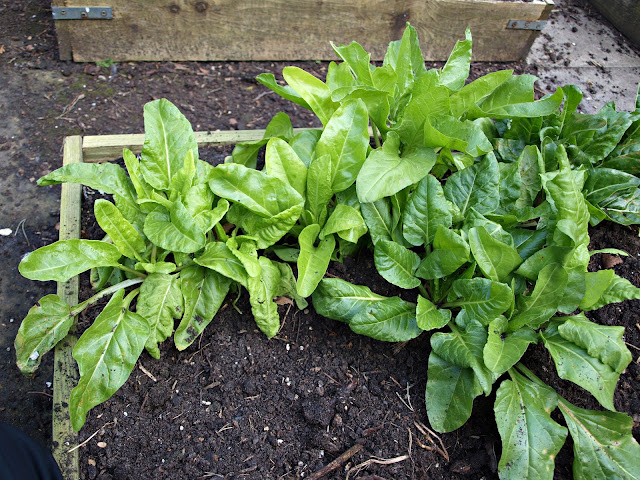 Nearly forgot to mention the Broccoli... There is not so much of it this year, but it's nearly ready for picking: 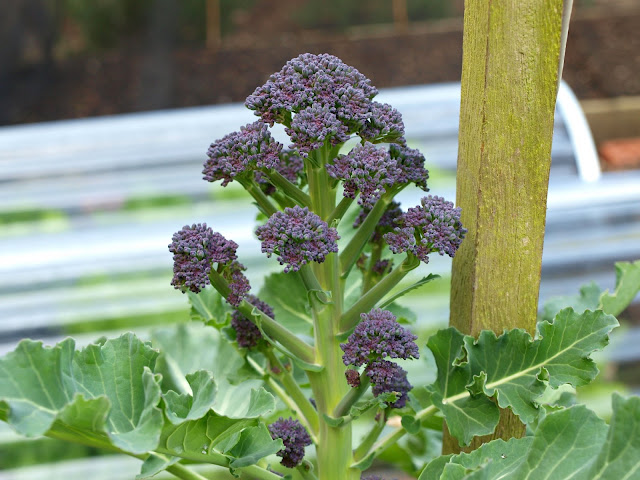 P.S. I'm working in London this week - setting off at the crack of dawn and getting home late, so I'm afraid I don't have much time or energy for blogging, and I'm relying on posts I created at the weekend, so you may not hear much from me for a few days....
Posted by Mark Willis at 17:30