March and April are probably the busiest months in the garden for me. I have been sowing and planting loads of things... Here's a quick tour of the Plot:-

At first sight the plot looks pretty bare still. In the foreground here you can see my lettuces. The cloches have come off them now, their job done. We have had a lot of bright sunny weather recently, with daytime temperatures up to about 20C, so I didn't want the lettuces to overheat. Beyond the lettuces is my little patch of Perpetual Spinach and Chard. In the bed to the right is the Purple Sprouting Broccoli - not much of it this year, what what there is is still good enough to justify growing this crop. 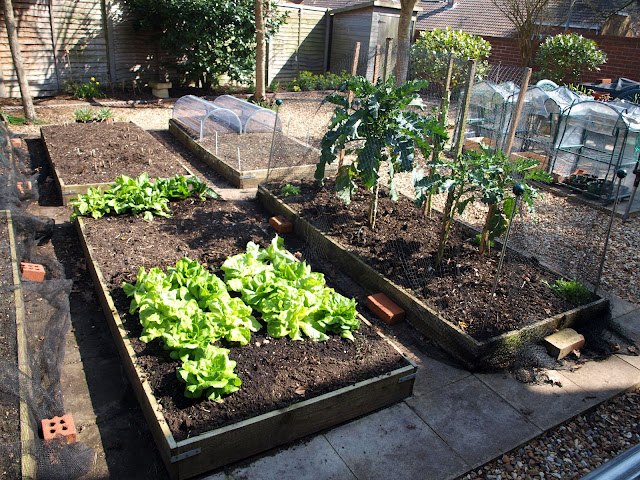 In the distance you can see my patio, cluttered now with mini-greenhouses acting as my "Nursery". The cloches at the left of this picture (below) are protecting sowings of beetroot and parsnips. In the middle bed on the left is the asparagus, just beginning to produce its first exploratory spears. Covered by the netting draped over hoops is the bed containing shallots and garlic. At the right, beyond the water-butt you can just make out a sloping plastic cloche affair that is housing the first of my potatoes. Out of sight to the right is the sixth raised bed, in which I have the Broad Beans and peas. 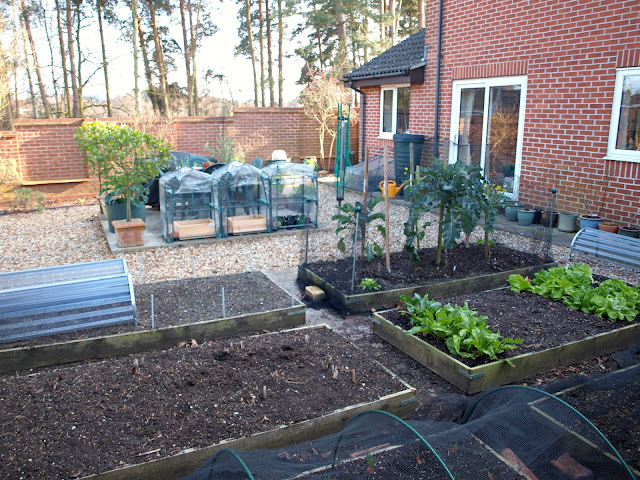 Here is the "potato-house" in close-up. As usual, I am growing my potatoes in containers. I use large flower-pots and some things originally intended as florists' buckets, in which I have drilled some drainage holes. My cover is big enough to hold 9 of these. In my photo is it open so that you can see inside, but it is usually closed with a zip-up lid. I intend to plant some more potatoes (probably next weekend) but my first 9 are 3 each of Charlotte, Anya and Belle de Fontenay. In due course I will also have some Pink Fir Apple, some Juliette and some International Kidney. I'll probably end up with about 20 or 25 containers devoted to spuds (constrained mainly by lack of space!). 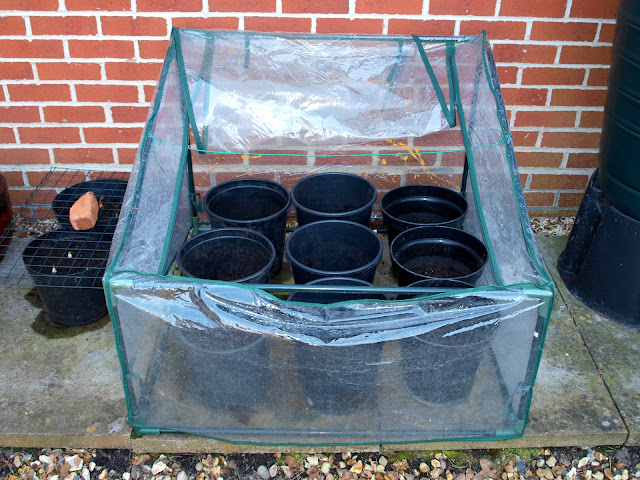 Moving on to the "Nursery" you can see that my garden table is being used to house several trays of seedlings - mostly tomatoes, chillis and sweet corn.  These are gradually being "hardened off" or accustomed to outdoor conditions, by living outside during the day and being brought in at night time. If there is a strong wind, or rain (unlikely at present!) they get moved to the top shelves of the mini-greenhouses. In a week or two when the seedlings are stronger I will leave them overnight in the mini-greenhouses and move them out to the table during the day. It's important that you carry out this hardening-off procedure in stages, not all at once, otherwise the young plants with die or not develop well. 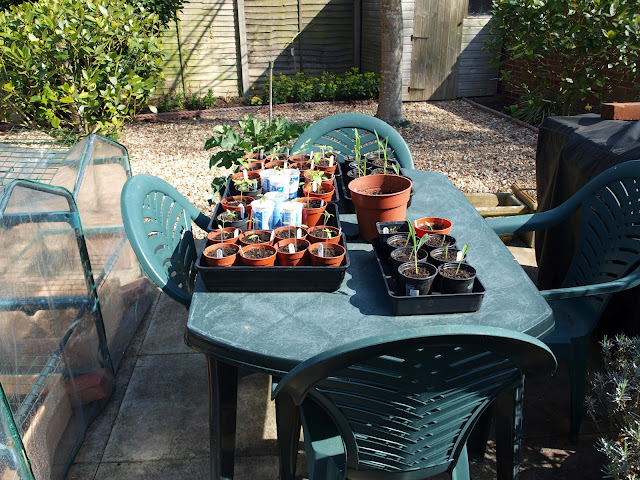 Here are the mini-greenhouses. They are quite lightweight so I have anchored them down with a couple of bricks each. In the photo, two of them are playing host to my ex-Majestic Wines wooden boxes, one with mixed baby salad and one with radishes. The third one is holding pots of brassica seedlings. 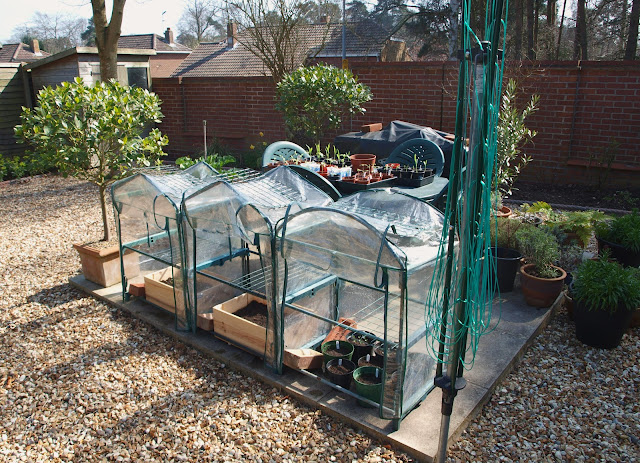 At the end of the patio furthest from the house stands a huge tub in which I am growing a single "Red Arrow" PSB plant, which is very nearly ready for cropping now. If you are going to try growing PSB in a container, let me advise you that it needs to be a BIG one, because this plant grows huge (maybe 5 feet tall?) if you let it. It will not do well in a small container. 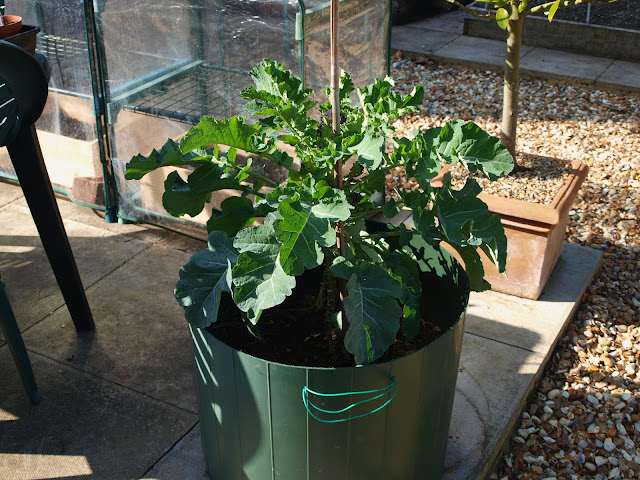 Over in a corner, near the brick wall that divides our property from the public road, is the partner of the PSB tub, made from the other half of a second-hand water-butt (Thanks, Rosemary!). This half is bottomless and is therefore just a very deep ring. In it I have sown some seeds of the Climbing French Bean "Cobra", one of my favourite and most reliable performers. At present I have a cloche over the seeds to provide some extra warmth. Later on, when the seedlings germinate and grow to a few inches tall I will remove the cloche and put in some canes for the beans to climb up. Cobra is a very vigorous variety and grows very tall, so I'll probably be using 7-foot canes. 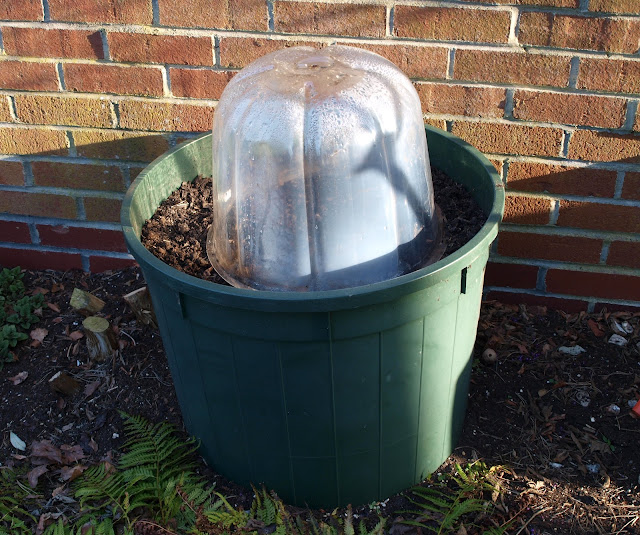 ﻿I have one final thing to show you today. When I cut down the huge Dogwood bushes the other day I found a couple of tiny Crocosmia leaves poking through the soil. I had a patch of Crocosmia here several years ago, and I thought they had died out, starved of light by the massive Dogwoods, but evidently not. They will no doubt be making the most of the opportunity to re-establish. I might actually dig them up later in the year and move them to somewhere more sensible. 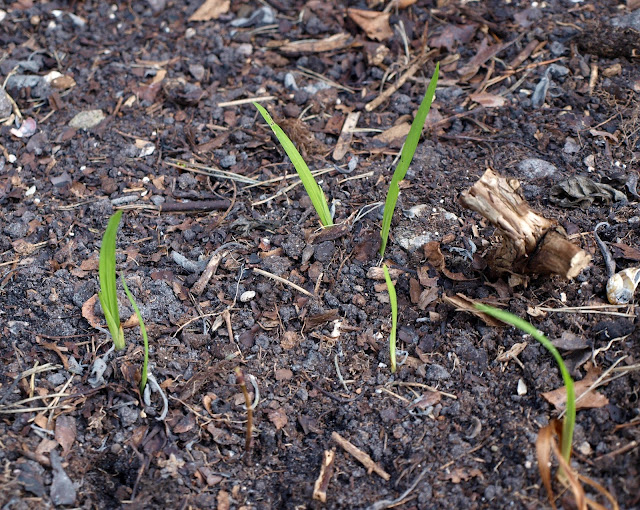