I don't grow many Alliums - usually just Chives. I don't really consider Onions to have good VSR, and the one time I grew Shallots they never got beyond the miniscule stage. However, inspired recently by a number of fellow bloggers, such as Sue from Our Plot At Green Lane Allotments, Elaine from A Woman of The Soil, and Sara from Hilwards, I have decided to have a go with Shallots and Garlic myself. As you probably know, I don't have a huge amount of space available, so my policy is to strive for quality and diversity rather than quantity.

Amongst my order from Thompson and Morgan therefore was one pack of "Longor" Shallots (18 sets), and one pack of Spring-planting Garlic (4 heads).  "Longor" is a French type, described as "half-long". What a strange term. Presumably they are "half-short" as well. 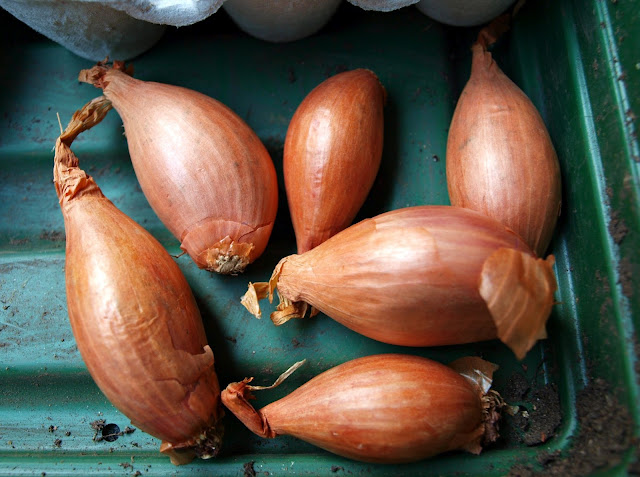 Last Friday I had a day off work and I decided that since the weather was nice and the soil conditions were right I would plant out most of both types. I was mindful though that a return to much colder weather was forecast, so I kept back a few of each - hedging my bets just in case the first planting didn't make it.

Following my crop rotation plan, the Alliums went in the bed in which last year's Parsnips and Beetroot were grown. Due to shortage of space I am limiting myself to only what will fit into half of one of my raised beds, so not a lot! I have managed to squeeze in 12 Shallots and 23 cloves of Garlic. 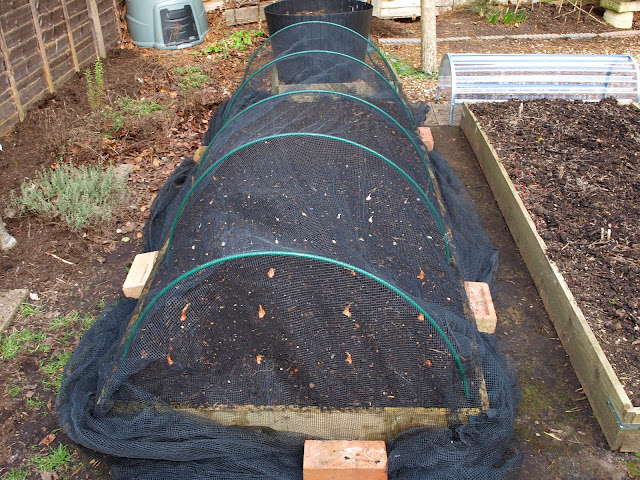 Yes 23 is a strange number, but it is all that I could salvage because to my dismay when I opened the heads of garlic to split them into individual cloves two of the four were completely rotten! 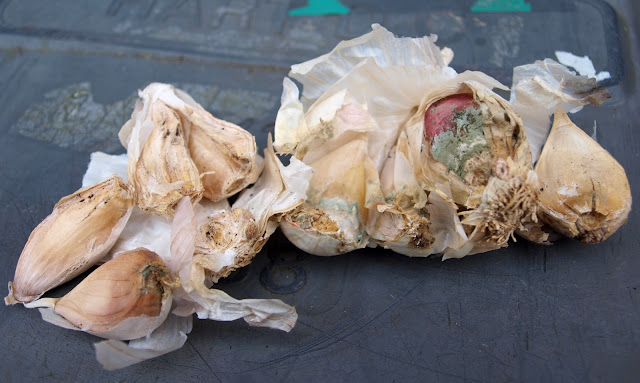 Not a pretty sight, is it? It could have been worse though, because as soon as I discovered this I rang T and M and they agreed straightaway, without the slightest quibble, to replace the Garlic.

Planting the Shallots and Garlic was an easy enough task. I prepared the bed by digging it over lightly with a trowel (this is practical only when preparing a very small space, otherwise a proper spade will be required), incorporating into the soil the home-made compost I applied last week along with a few handfuls of pelleted chicken manure, and raking it flat. I then pushed the Shallots and Garlic into the soil at the relevant spacing (I used about 12" / 30cm between the Shallots and about 6" / 15cm between the Garlic cloves). They need to be firmly settled in so I ensured that about two thirds of their depth was covered, and then watered them in quite generously. The final stage was to cover the bed with netting supported by plastic hoops, in order to deter the foxes and birds.

Now all I have to do is weed and water occasionally, and wait until about August, when the plants should be ready for harvesting. Sounds suspiciously easy, doesn't it?