Today, although some parts of the UK are carpeted with snow, here in Fleet we have blue sky and sunshine. Sunshine makes everything look so much nicer! This pot of Mint in my coldframe is certainly enjoying it: 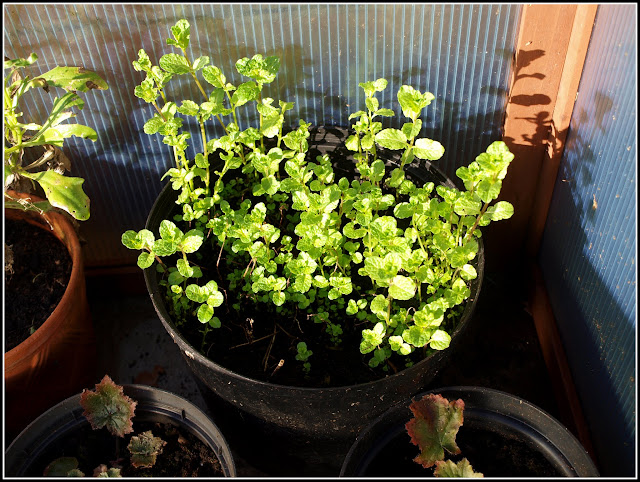 On sunny days like today I open up the lid of the coldframe for an hour or two to give the plants maximum light. The rest of the time they are tucked up inside, protected from frost and especially wind, which can be more damaging than cold temperatures. The benefit of the coldframe is very obvious when you compare that Mint plant which is bursting into new growth to an exactly similar one that has been outside all Winter - and is still showing almost no growth. 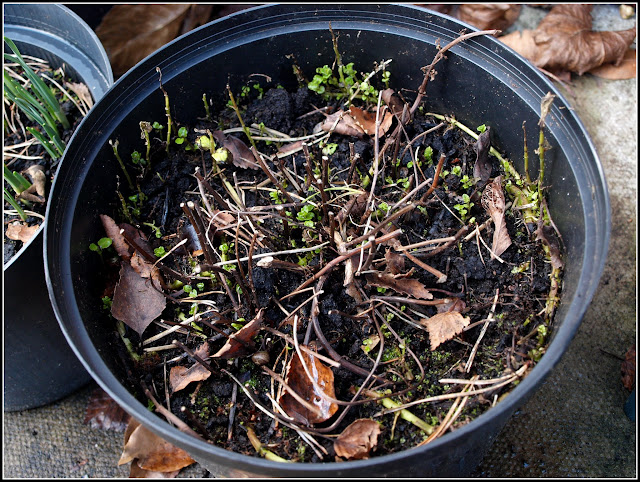 A month or so ago (Feb 7th, to be precise) I sowed a batch of Broad Bean seeds in some plastic containers and set them to germinate in one of my mini-greenhouses. After about three weeks there was no sign of germination, so I brought the containers indoors to hasten things along. After just a few days on a windowsill above a radiator, they began to appear: 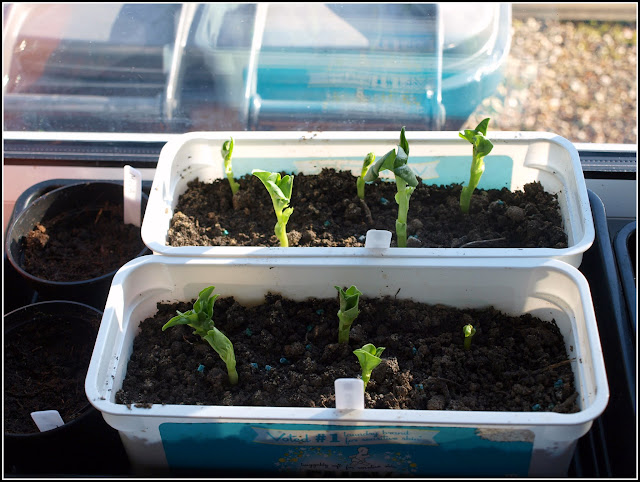 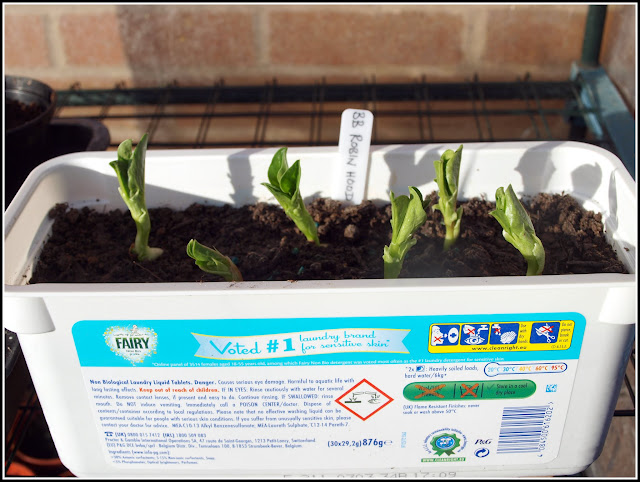 I have now moved the little plants out into the mini-greenhouses again, because I don't want them to get soft. When they have at least two fully-opened leaves I will plant them out in one of the raised beds, initially under cloches. 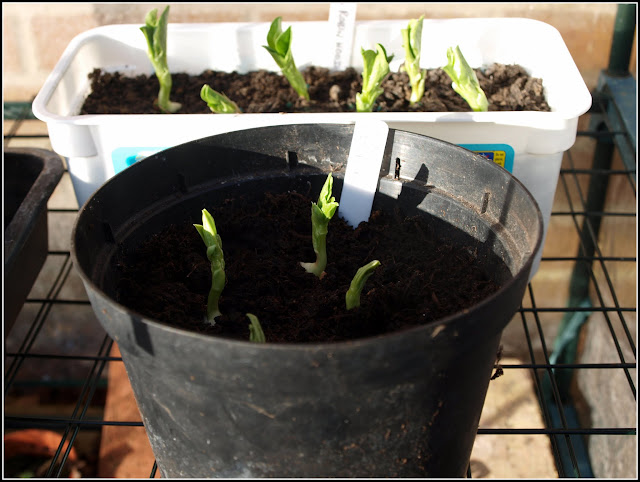 I did the same thing with my Cabbages, sown on Feb 13th. Most of them germinated rapidly when brought indoors. I had sowed two seeds per pot, and almost every one germinated. 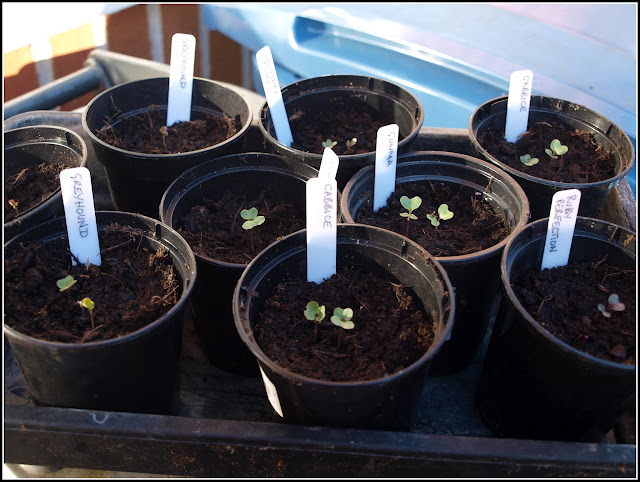 So now I have removed one of each pair of seedlings, leaving behind the strongest one, or if they both seemed the same, the one most centrally-placed. 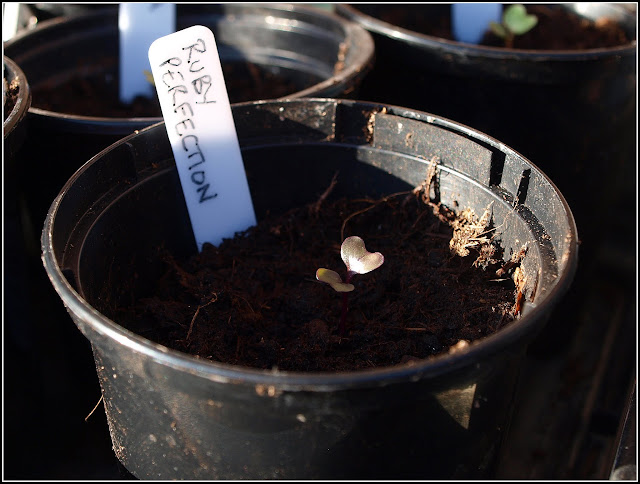 These too are out in the mini-greenhouses now, so that they get maximum light. Keeping them indoors for any length of time risks having them go weak and spindly - sometimes called "leggy". Outside, they will develop more slowly but they will be stronger.


One type of plant that I will not banish outside is the Basil. I sowed about 15 seeds in a 6-inch pot which I have kept on the windowsill all the time, covered with a clear plastic bag, which increases humidity and thus helps germination. When the seeds germinated, I thinned them out by about 50%. 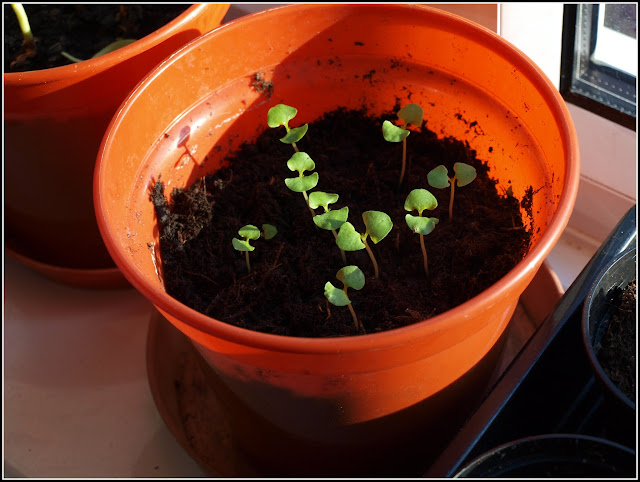 In due course, when they are big enough to handle easily, I will select the best ones and transplant them into more of these 6-inch pots. I normally keep four of them on my Dining-Room windowsill more or less all year round. These plants shown below are ones I sowed this time last year. I have cropped them three or four times and used their leaves to make Pesto. 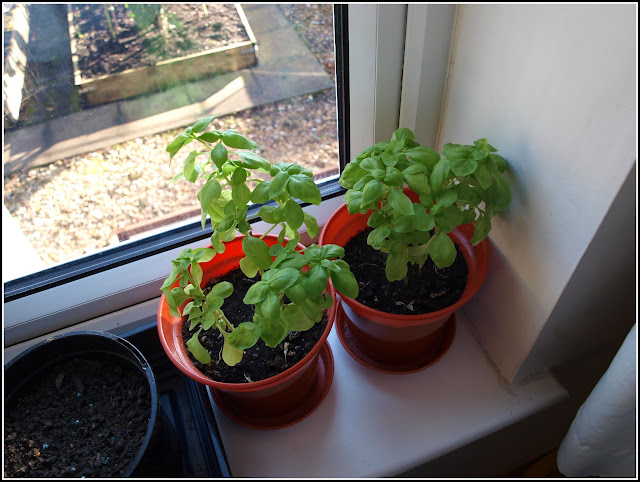 I don't generally grow any Basil outside, because it doesn't do well - it can't get enough warmth or direct sunlight.


I'm still waiting for my pot of "Terrain" peas to germinate. They are in the black pot seen at the left of the photo above. They have been indoors for a week now, and still nothing... Patience is the most necessary virtue for a gardener!