Back at the end of January, I bought my seed potatoes. Since then they have been quietly sitting in the garage, chitting. Let's chat about chitting...


Chitting means letting the potatoes develop shoots, which grow out of the seed-tuber's eyes, most of which appear at the rose end of the tuber. Sounds gruesome and complicated, doesn't it? Actually it's not. Nor is it strictly necessary. Potatoes will grow quite happily without being chitted, but some people contend that chitted potatoes produce stronger plants and higher yields. I'm not sure whether there is any evidence to support such views, but I chit my potatoes anyway. In fact, one of the most powerful arguments for it these days is that seed tubers are being sold earlier and earlier in the year, so if you leave it until March to buy them you may find that there is less choice, because all the more desirable ones have already been sold! Since it is unwise to plant potatoes in January, this means that you really have to chit your spuds. 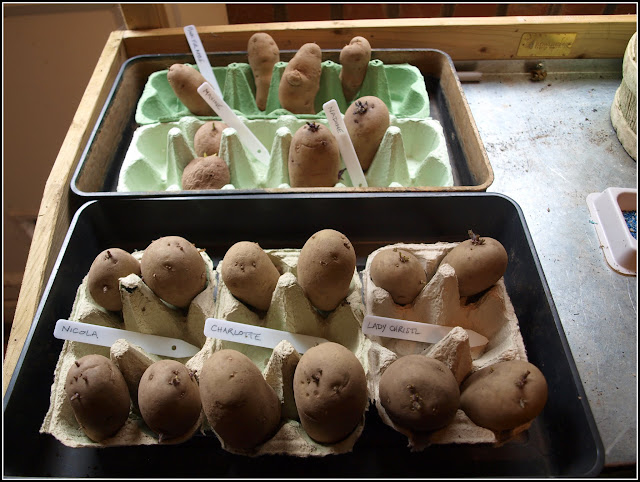 Traditionally, amateur potato-growers chit their tubers in old egg-boxes, which is a convenient way of supporting the tubers with the rose end uppermost. The rose end is the end of the potato furthest from the place where it was originally attached to its parent plant. Most of the new shoots develop from here.


My potatoes are currently in the garage, which is cool but frost-free. It has a window, so the potatoes get a reasonable amount of light. If they are kept in the dark the chits will be long, pale and thin and too fragile to do well. You're looking for short, sturdy, dark-coloured chits - maybe an inch or so long. Some people advocate removing all but 2 or 3 shoots, aiming to produce a smaller number of bigger shoots.


My potatoes are not ready for planting yet - they will need another few weeks - but they are doing fine. All I need now is something good to plant them in. For the last couple of years I have used mostly composted stable manure, mixed with a small proportion of commercial general-purpose compost, but I have become disillusioned with commercial compost of all types (regular readers will know why!), and I really don't know what to use this time. I think maybe I'll use mostly soil from that bulk bag I bought the other day. At the time 1 tonne sounded like a lot, but I have used a lot of it already and if my new raised beds are to be filled properly I will probably have to get another bag.


At least I have some nice containers for the potatoes. These are the 35-litre ones I bought from LBS Horticultural Supplies. 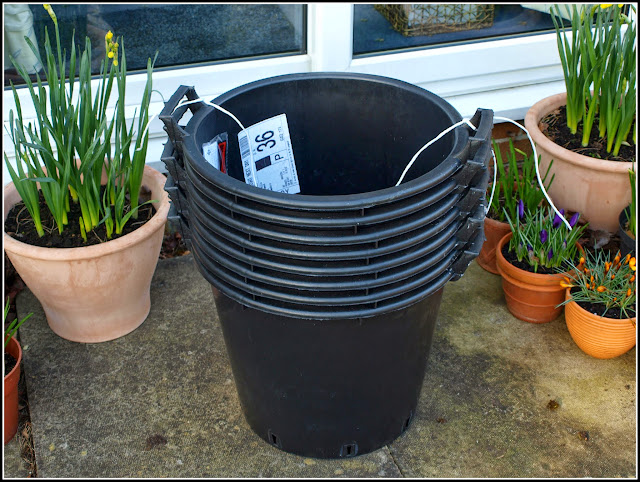 I am going to plant two tubers in each of those, but I also have some other, slightly smaller, pots, which are only big enough for one tuber each. The bigger pots are better, because they dry out less quickly and therefore require less effort to keep properly watered. This makes a big difference, because potatoes do not do well in dry conditions.


Since I'm writing about potatoes today, I though some readers would probably be interested in this - a Calendar of Potato Days. The dates are for this year, and many of them have passed already, but at least the list may help you to identify a suitable event near you for next year.