A recent exchange of messages via Facebook with some Malaysian friends has rekindled my interest in Malaysian food. Today I'm making "Rendang Daging", in other words slow-cooked Beef Curry with coconut. This is a "dry" curry rather than one served in a sauce.

Just like a British beef stew, there are countless variants of this dish, and everyone has their favourite recipe. There is no definitive version! The ingredients vary from one recipe to another, but most of them agree that you must include coconut, both the milk and the toasted, powdered flesh of it. My version starts here: 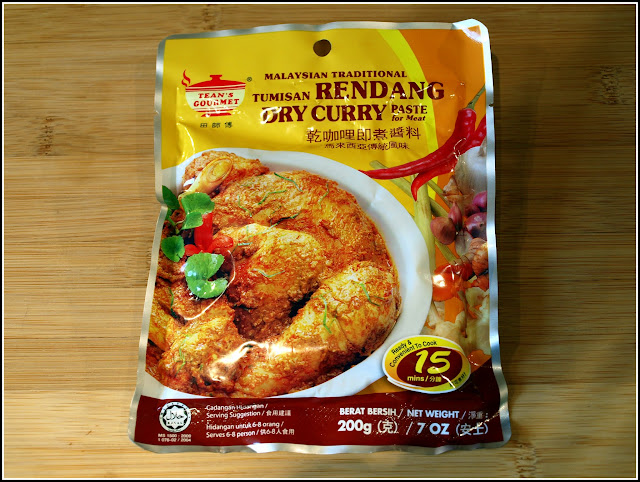 My Malaysian friends say this is pretty authentic - so good in fact that one of them says that she always takes some of these packs with her when she travels abroad (i.e. out of Malaysia). This particular pack was bought in our local Chinese Cash-and-Carry - See Woo, in Reading.

Despite the existence of this ready-made sauce, I was determined to "play" with my Malaysian ingredients, and I ransacked the kitchen cupboards and the freezer to see what I could muster! I made a marinade for my beef with these ingredients: 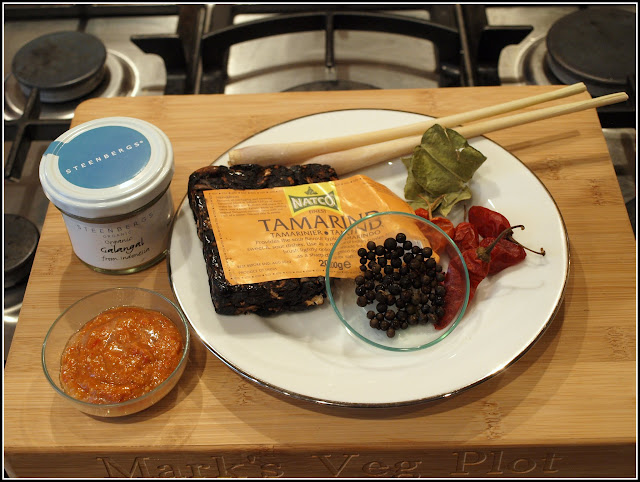 That's a couple of stalks of Lemongrass, some dried chillis, some powdered Galangal, some Tamarind, a couple of dried Kaffir Lime leaves, a few "fresh" (frozen) Green Peppercorns and a tablespoon of my Harissa, which I reasoned would be vaguely equivalent to Sambal Tumis - except without the belacan (shrimp paste). The Peppercorns had lost their green colour in the freezer, but not their flavour, I can tell you. I blended them with a few cloves of Garlic to make a very pungent paste. I broke off a chunk of the compressed Tamarind and soaked it in warm water and then just used the resulting liquid, discarding the pulp. I only used one of the stalks of Lemongrass (I pounded it with a meat-mallet to release the flavour), and I kept the other one for the long slow cooking phase of my dish.

While the meat was marinating (about 6 hours) I made some kerisik. Kerisik is one of the characteristic components of a good rendang. It adds both texture and flavour. I made mine from these dried Coconut Flakes. I used about 75g. 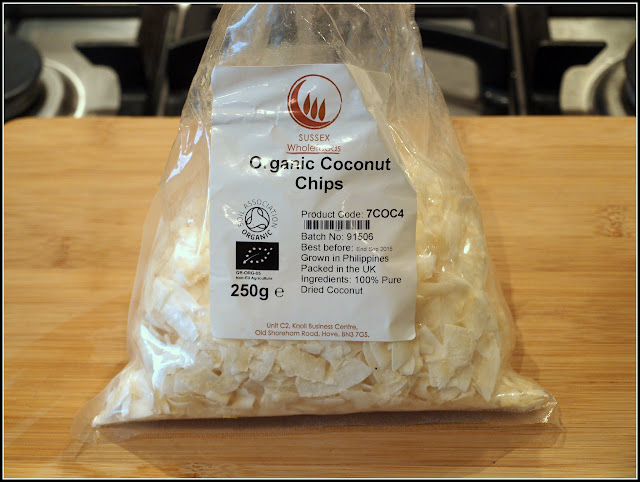 I toasted my coconut in a dry frying pan for about 10 minutes, over a low heat, stirring all the time to ensure that it didn't scorch. 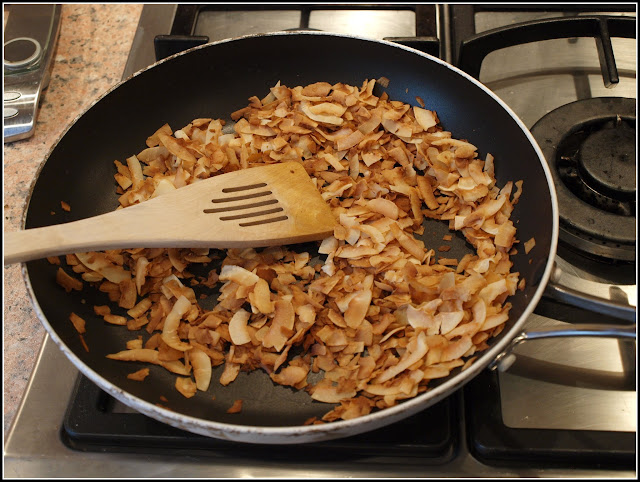 Then I ground it to a powder in a spice-grinder. This is what the finished article looks like - the desired texture of kerisik is sometimes described as being like soft brown sugar, so I think this is about right. If you make it with fresh coconut rather than dried, it will come out as an oily paste rather than the breadcrumb-like substance that mine was. 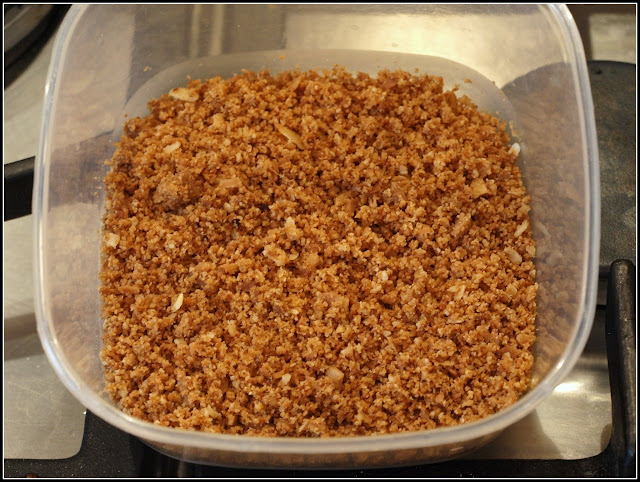 Deciding when to start cooking the beef is a matter of working backwards approximately three hours from when you want to eat. A rendang does not need a choice cut of meat, because long slow cooking will tenderise even meat that would normally be quite tough. I used diced Stewing Beef from the supermarket.

So, having decided to start cooking at 5 p.m. I drained the marinade off the beef and patted it dry and discarded the marinade, which had done its job by this time.

The next step was to soften a large onion, peeled and finely chopped, in a tablespoon of oil in a large ovenproof pan, without browning it. Then I added the sachet of curry paste and cooked it for a couple of minutes 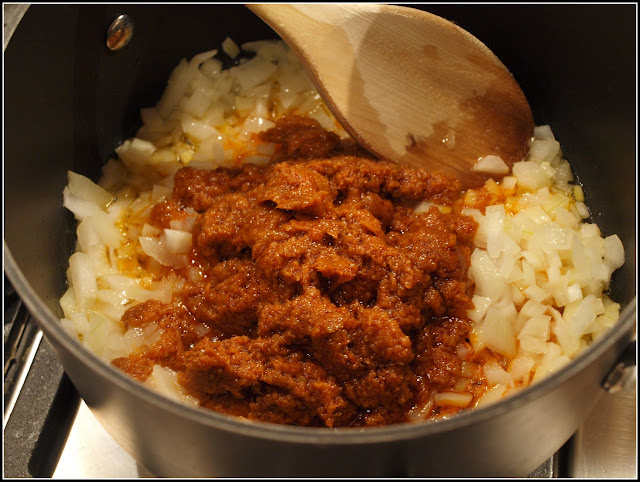 Then I added the beef and stirred it in well to thoroughly coat the meat. I also put in another stalk of Lemongrass, smashed and tied in a knot so that it would be easy to identify and remove later on. 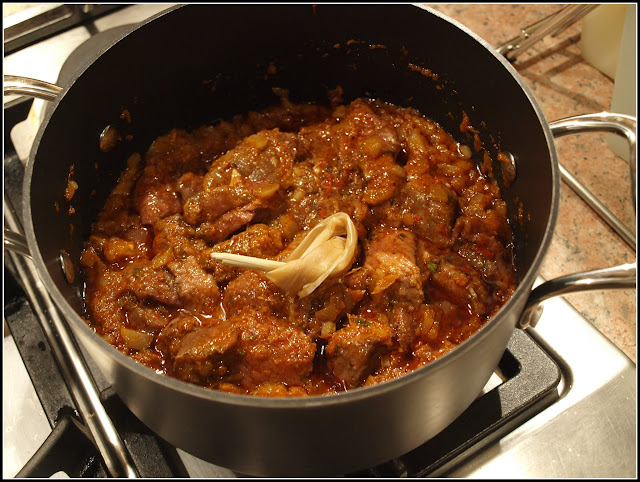 Cook for about 5 minutes, then put in about 250ml of coconut milk, and bring the whole mix to the boil. 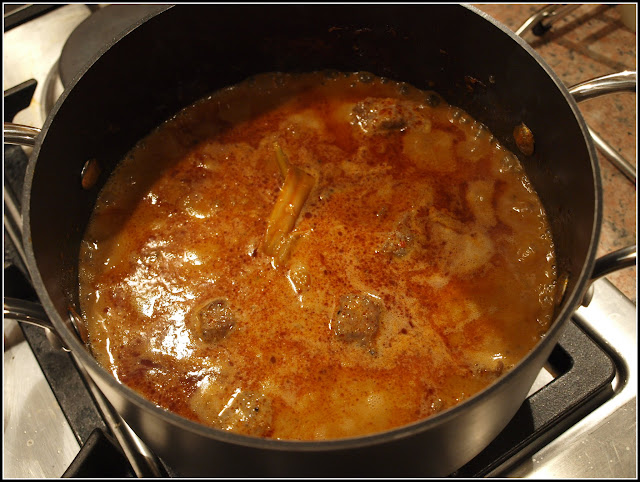 Turn down the heat, cover the pan and simmer for 3 hours!

The aim is to slowly reduce the amount of liquid, so that the texture of the meat is eventually almost dry. Of course it hopefully won't be dry inside, but very tender. This means that you need to check every so often to see that things are going according to plan. A few minutes before serving time, stir in the kerisik.

By this time the sauce should have gone dark and caramelised, and the oil in the coconut milk will have separated out. 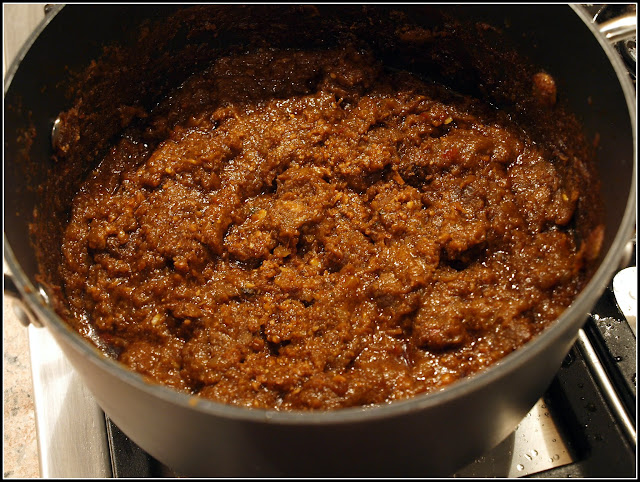 While all this was happening, I made a "Gado Gado" salad / vegetable dish. Like the rendang, there are many possibilities here. My version had lightly-cooked carrots, beans and cabbage, with some beansprouts briefly scalded in boiling water, some quartered hard-boiled eggs, some raw cucumber and some fried tofu - all topped-off with some peanut sauce. It's a meal in itself really, but in our house it is an essential accompaniment to any Indonesian or Malay dinner. 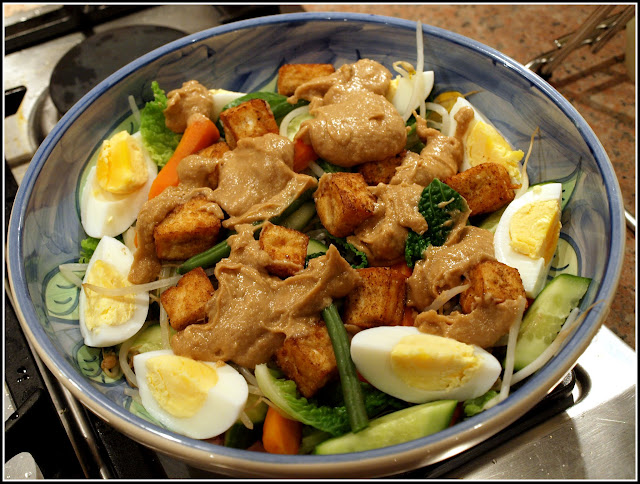 Do you see the fried tofu on that salad? It's difficult stuff to work with, isn't it? I discovered the hard way how much it spits when you fry it! 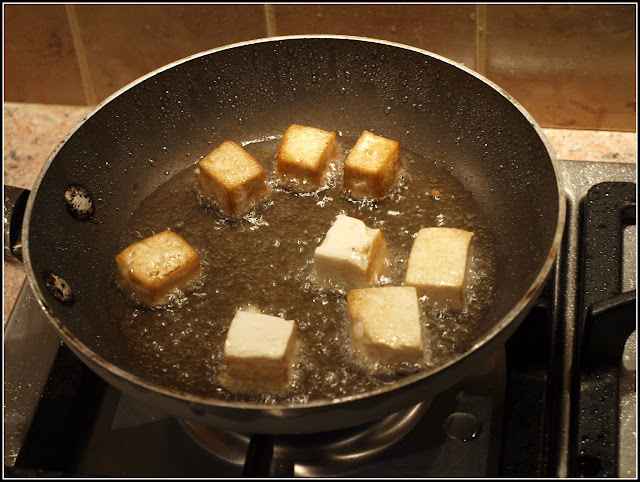 I'll be giving the cooker top a good clean tomorrow... The fried tofu is crispy and golden on the outside, but soft in the inside. 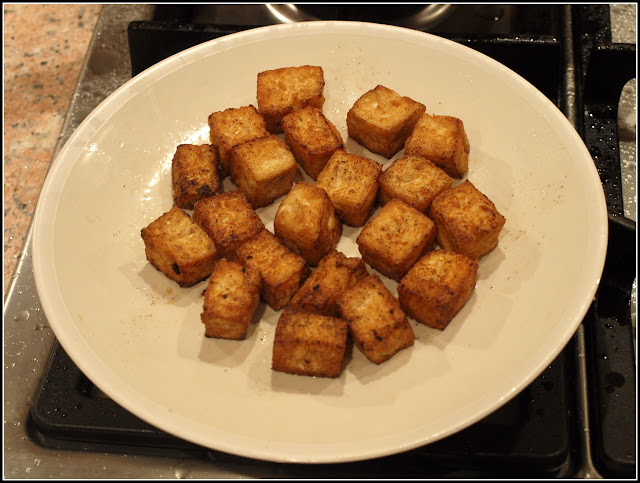 The final element of the meal was some plain Basmati rice, cooked to perfection in our trusty electric rice-boiler. Here is the spicy, nutty beef on a bed of fluffy white rice... 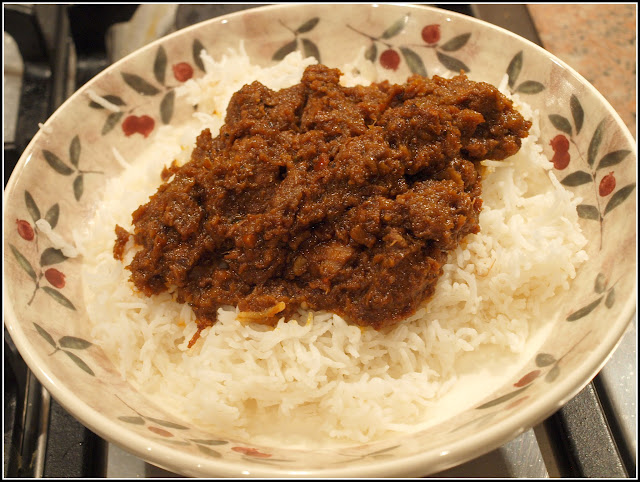 The rendang was more spicy than I had expected - really quite mouth-tinglingly hot! Not that I'm complaining. Whether this was due to the Tean's curry paste or to my home-made marinade I know not, but one way or another it was even better than I had expected.

So there you are then: my version of Rendang Daging. I wonder what my Malaysian friends will think of this....
Posted by Mark Willis at 22:00