A holiday in Mexico - Part 2

In this post I am going to write about a trip we took, as part of the prize that Jane won. It was supposed to have been a visit to the Punta Sur eco park, but the weather was not good, so we decided to do a tour of the town of San Miguel de Cozumel instead. Our guide for the day was Yibran Aragon, the husband of Gilda Sigie, the lady who was the organiser of our holiday. He normally works as an underwater photographer, but he was a most amusing guide. Here he is fooling about with the Christmas elf hats at the Municipal Market... 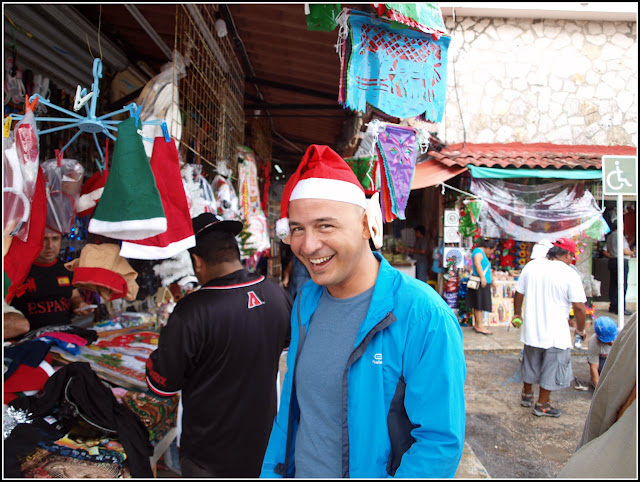 Yibran picked us up at the hotel in his car, and asked us straight away what sort of things we wanted to do and see. Of course we said that we wanted to see Foodie stuff and the sort of things that real local people do, as opposed to the tourists. We discussed the difference between Tourists and Visitors, and agreed that we were definitely Visitors, not Tourists!

First stop therefore was the Mercado Municipal (Municipal Market). This is definitely a place where real people go to buy real food ingredients. I bet they don't get many tourists there. 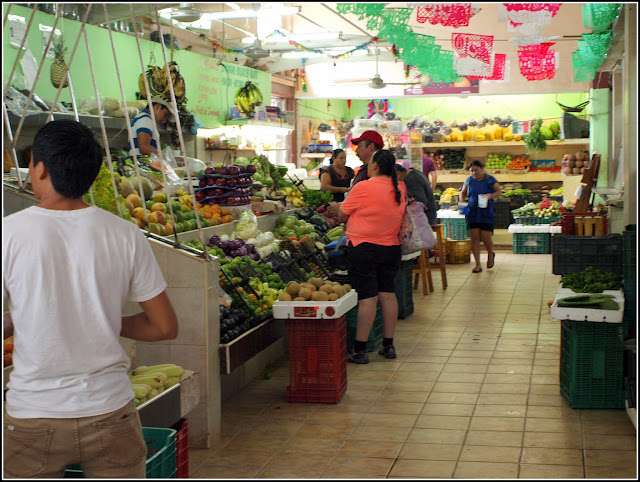 The market is not huge, nor is it particularly picturesque, but it is genuine. It is a place to shop for real local raw ingredients. Here is a selection of photos illustrating the range of food on sale:

Obviously it was not practical for us to buy much at the market, but we did come away with a few spices and dried chillis, mostly purchased from the stall of this little lady. I say "little" because she can only have been about 4 foot six tall at most! 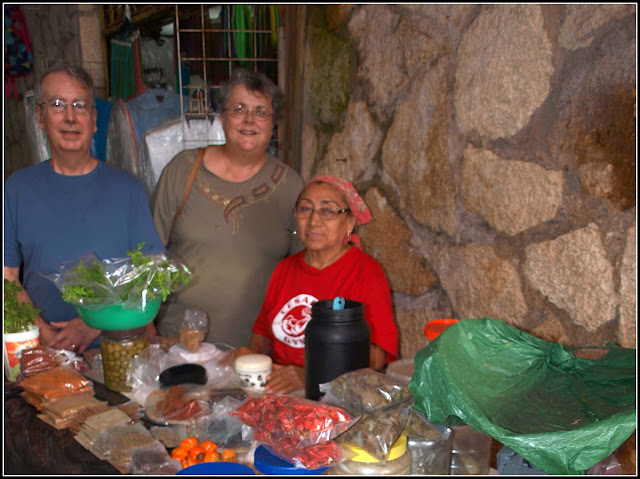 As well as raw ingredients on sale, there were also stalls selling prepared food, such as this Taqueria, selling tacos, tortillas etc. The man with his back to the camera is frying meat on the plancha or griddle-plate. The containers in the foreground hold a variety of meat, vegetables, condiments etc, which are used for filling the tacos. Customers sit on high stools at the counter to eat their food. 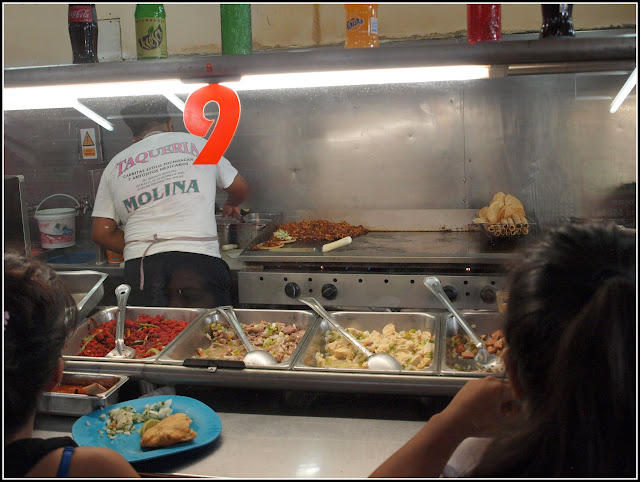 Here is a woman making tortillas for people to cook at home. The "masa" (dough) is in big lumps on the blue tablecloth. The finished tortillas are in plastic bags in the foreground. 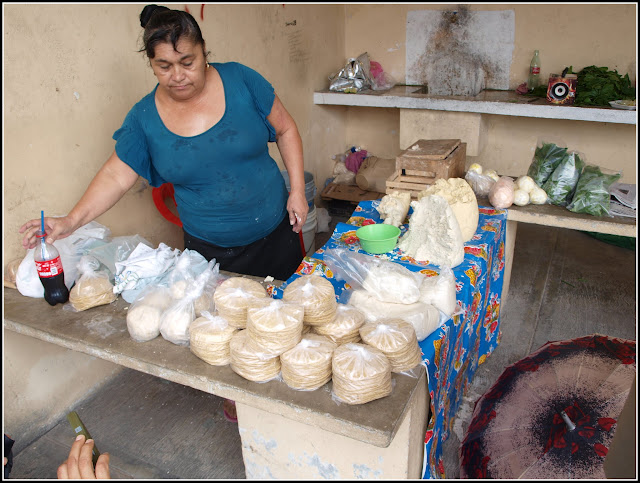 Having seen the tortillas being made, Jane and I were insistent that we needed to buy some proper Masa Harina with which to make our own tortillas, so our next stop was at the Bodega Aurrera supermarket. [Note: Masa Harina is a flour made from maize that has been nixtamalised. Tortillas made with ordinary flour always turn out brittle rather than soft.] Unfortunately, this type of flour is very hard to obtain at a good price in the UK. You can get it via online suppliers, but postage is very expensive.


The supermarket was unremarkable in appearance (a bit like an Aldi maybe?) so I didn't take many photos, but I couldn't resist photographing this fine display of chillis: 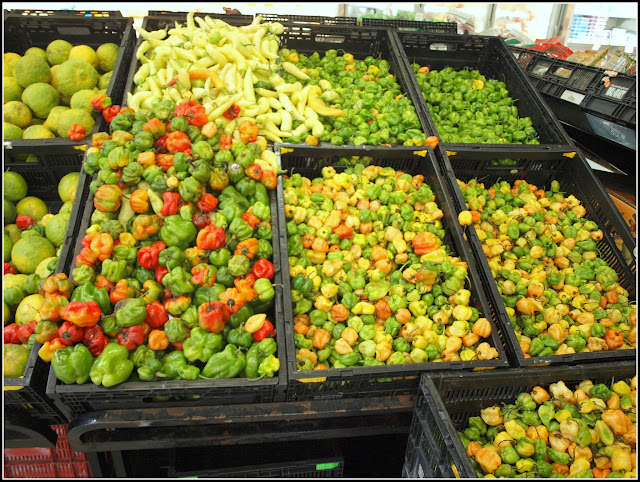 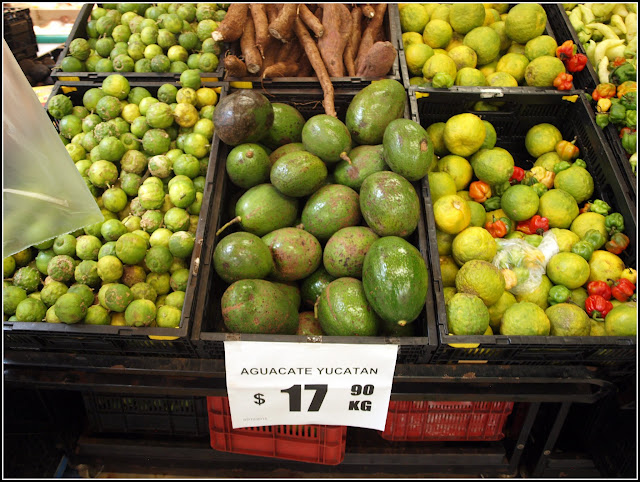 Our next stop was at a Garden Centre. They did have some fine plants, but I was particularly impressed by the glazed ceramic pots on offer. 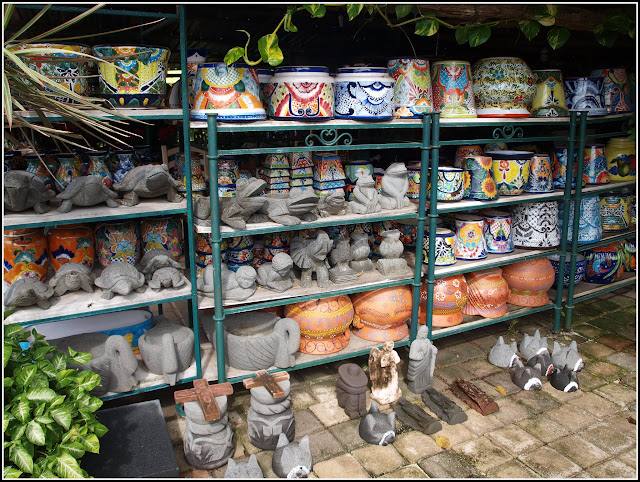 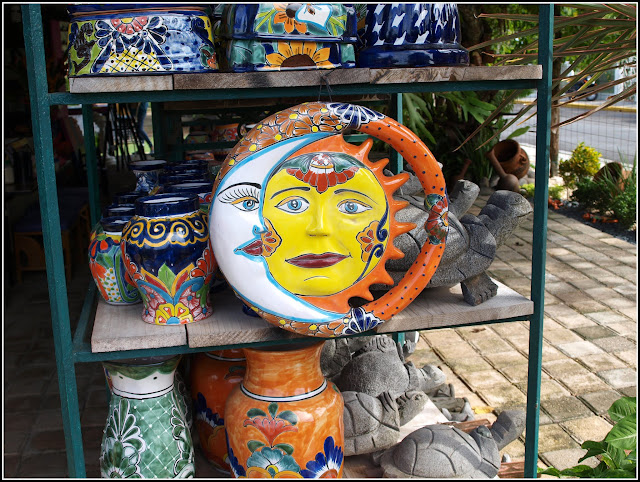 They also had "functional" terracotta-ware for sale: 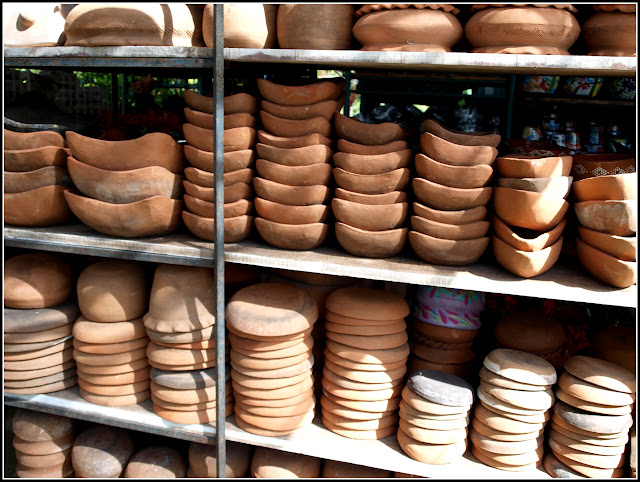 In amongst the pots we found this... 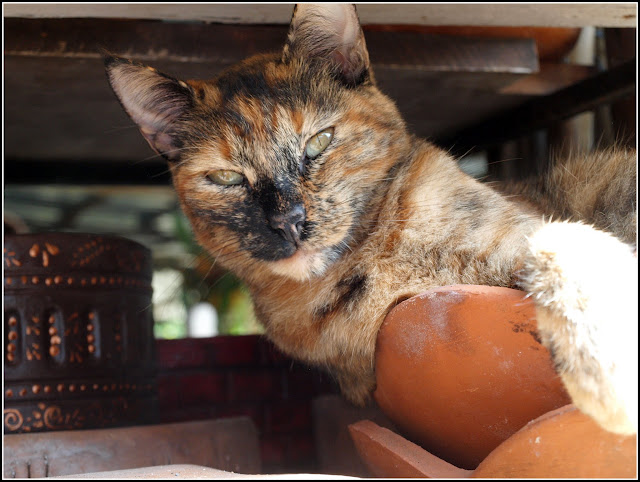 By the time we had done all this it was lunch-time, and our guide took us to Casa Mission restaurant. 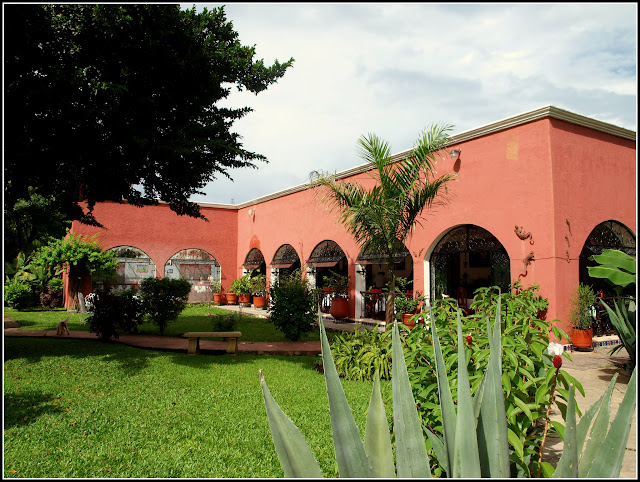 The food here was definitely Mexican, but also definitely a bit up-market. At the suggestion of our host we ate as a starter a simple but intensely flavoursome chicken broth with shredded chicken and rice, accompanied by tasty (and soft!) corn tortillas. This was followed by "Pollo con Relleno Negro" (Chicken in a black chilli sauce - think squid ink...) and "Arrachera de Res" (Skirt steak served beaten and breaded, like a Wiener Schnitzel). We were impressed with both of these, though I found the black sauce a little offputting. I would love to go back to this restaurant to explore more of its extensive menu.

In the grounds of the restaurant was a Tequila museum, showcasing not only the product, but also the traditional manufacturing process. It starts of course with the Agave plant: 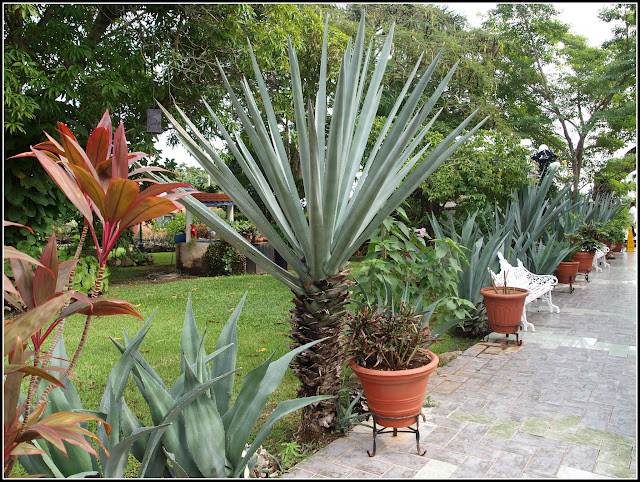 Here are the stems of Agave plants being crushed with a stone wheel. In days gone by this would almost certainly have been propelled by a long-suffering donkey. 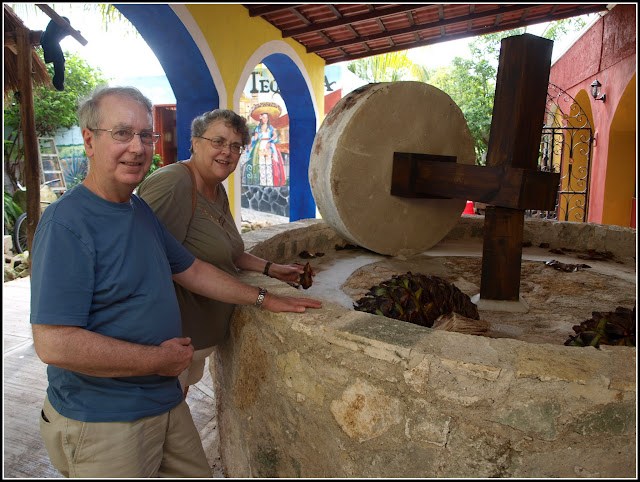 Here is the still, transforming the fermented Agave juice into alcohol. 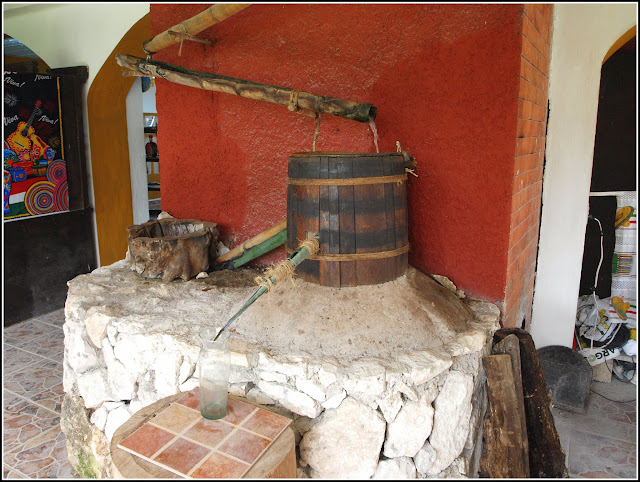 And of course the finished product. 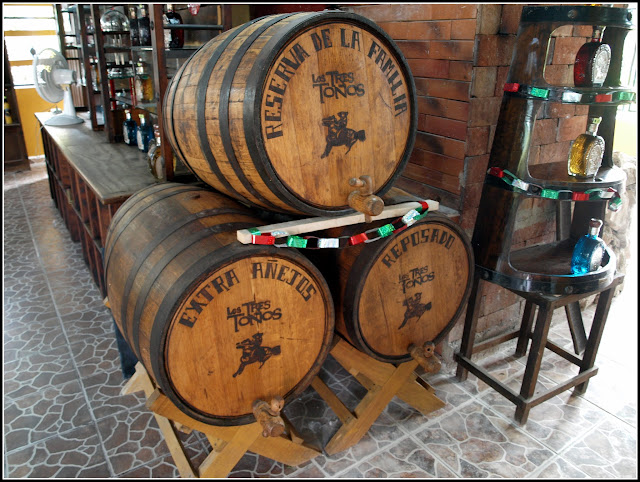 Other highlights of San Miguel town included such things as the Ferry Terminal (we came across to Cozumel island on a ferry like the ones seen here). 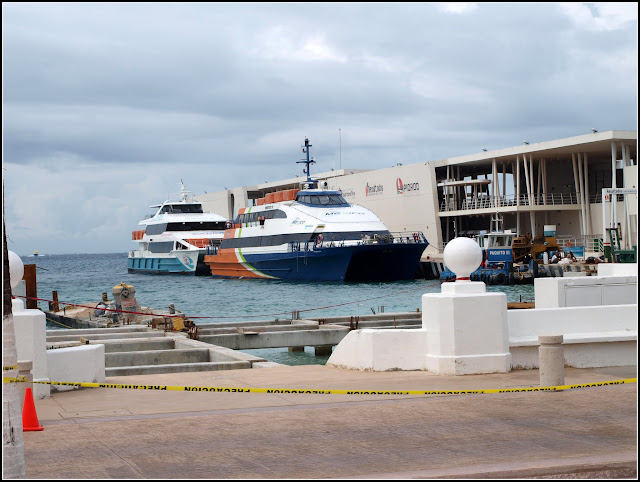 And the Christmas tree at the foot of the Ferry Pier: 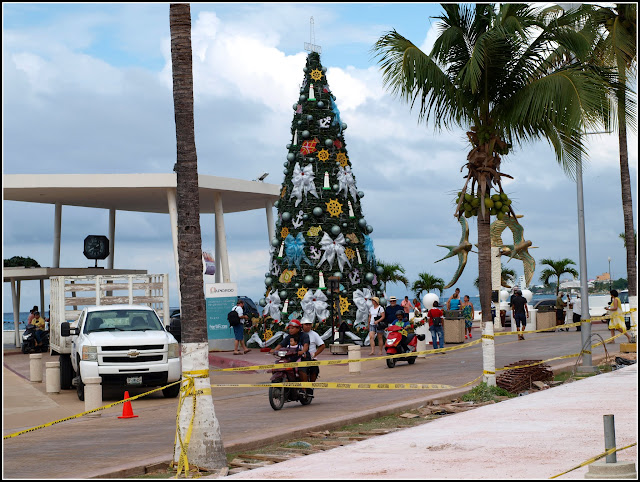 In the main Plaza a Santa Claus tableau was being erected. No reindeer and sleighs here, but boats, waves and dolphins instead! 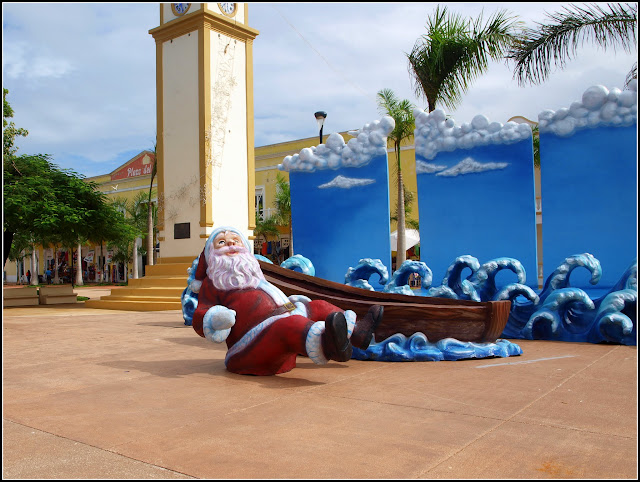 This is the Coral Fountain on the promenade; 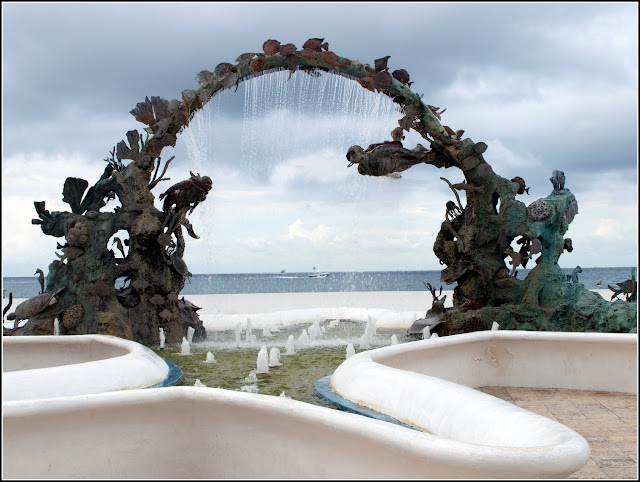 In many places around the town were some amazing works of mural art, like this one at the back of a car-park: 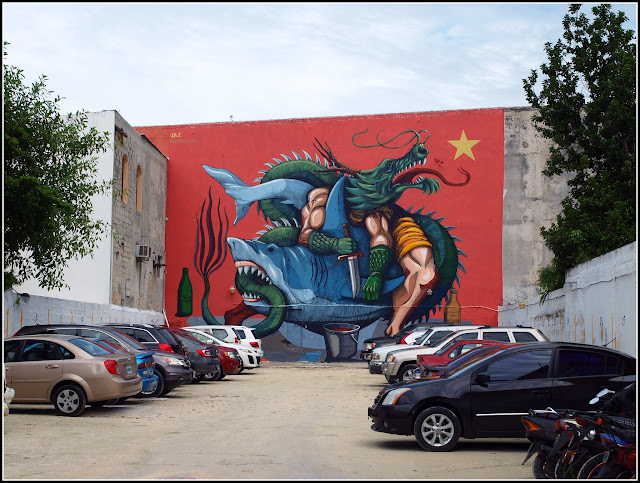 This was a house that caught my eye, standing out amongst the mainly drab boxy concrete shops and dwellings. 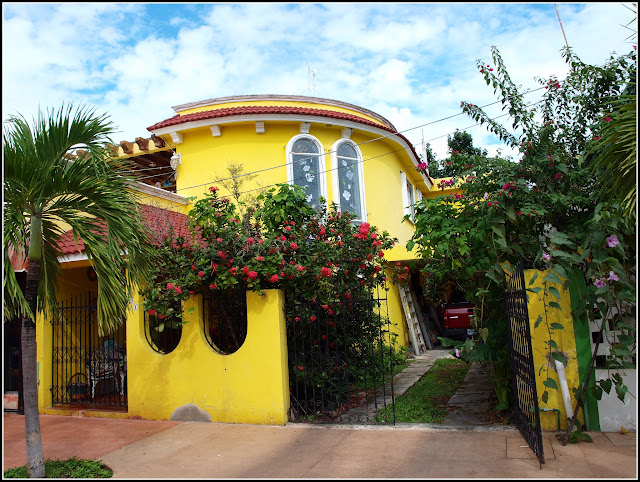 A Catholic shrine outside the Market: 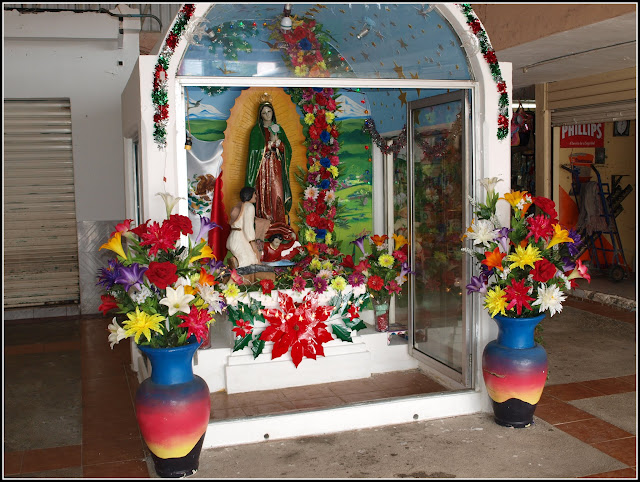 A tricycle taxi, powered by a moped: 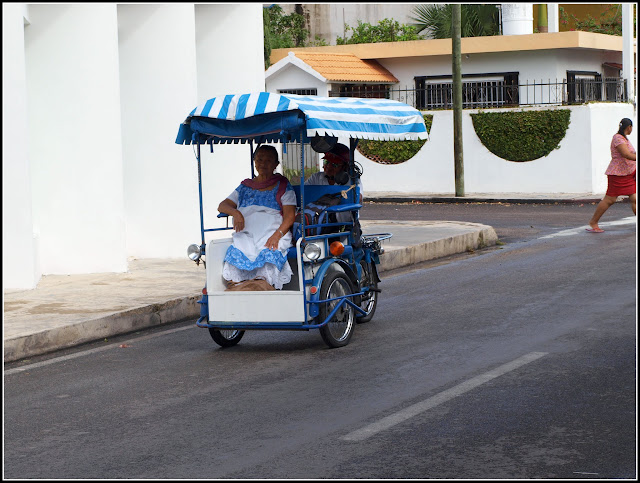 A horse-drawn carriage, with Tourists taking photos of us Visitors! 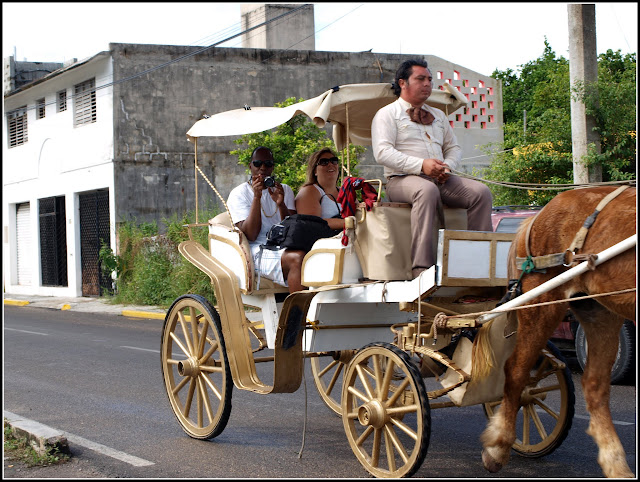 An finally, back to the hotel, haven of tranquillity... 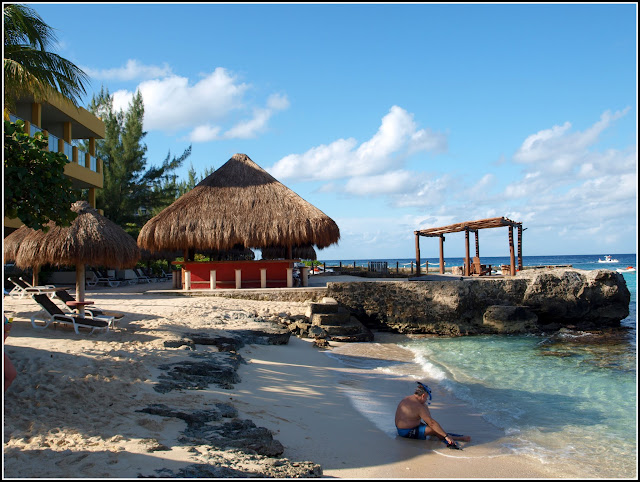 This has been a long post, I know, but I have more to show and tell. Tomorrow I am going to write about Flora and Fauna. See you then!
Posted by Mark Willis at 16:00