A holiday in Mexico - Part 3

Well, yes, I know that some of you will be saying "Oh no, not another post about Mexico", but honestly this post is about a very different subject to my previous two! In a day or two I will get back to my usual subjects - gardening and food - but today I want to write about some of the plants and animals we saw in Mexico.

Unglamorous as it may sound, I will begin with the tortoise. Right outside the main entrance of the hotel in which we stayed was a walled enclosure housing lots of tortoises. It wasn't possible to count them accurately, because at any given moment a proportion of them were hiding under rocks and bushes, but I would day there were probably about 30 of them. 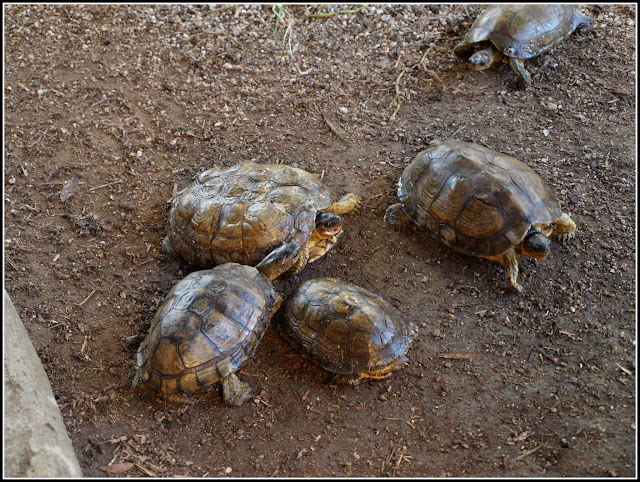 I'm not a connoisseur of tortoises, but I would say they looked pretty healthy. They were certainly much more active than I expected. Whenever we went by they "ran" over to say Hello. Yes, they did move quite swiftly! I'm sure they were expecting to be fed, but it seemed as if they were consciously seeking human interaction.

In the hotel grounds there were loads of birds, the most numerous of which were the Grackles. The Grackle is a bit like a cross between a magpie and a blackbird. The males are bigger and blacker than the females, and have much bigger tail-feathers. This one is a female: 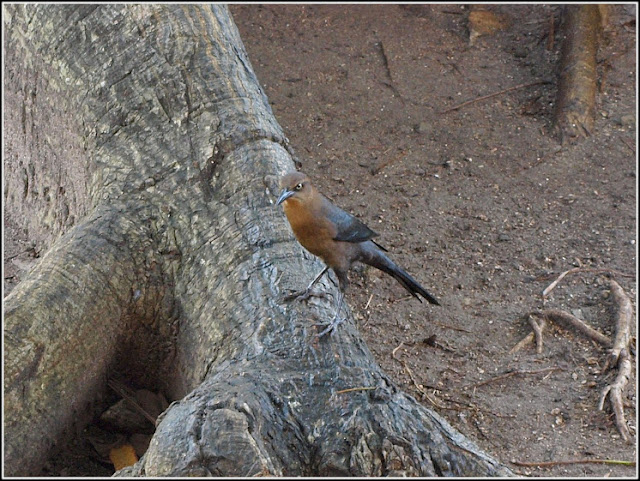 Just like Magpies, Grackles are aggressive and cheeky. They were very keen to steal food from the humans. One particular trick we saw repeated several times: as a party of humans got up from their table in the restaurant (open to the elements on two sides) a bird would quickly swoop down and grab a packet of sugar, taking it away and ripping open the paper to get at the sweet stuff inside. The waiters were evidently aware of this trick and tried hard to clear the tables as soon as a guest got up to leave, but they weren't always quick enough.

I only took my Olympus E-450 camera with me, with the standard lens, so it was hard to get any decent photos of birds, but if you were a serious bird-watcher Cozumel would be a good place to go. Wherever we went there were birds, many of them quite unlike ones we had seen before. For instance we saw a Painted Bunting, whose amazingly bright and varied colourings are so very different to the usual "Little Brown Job" type of Bunting. This dreadful photo is all I can offer, but at least it does prove that we saw a Painted Bunting! 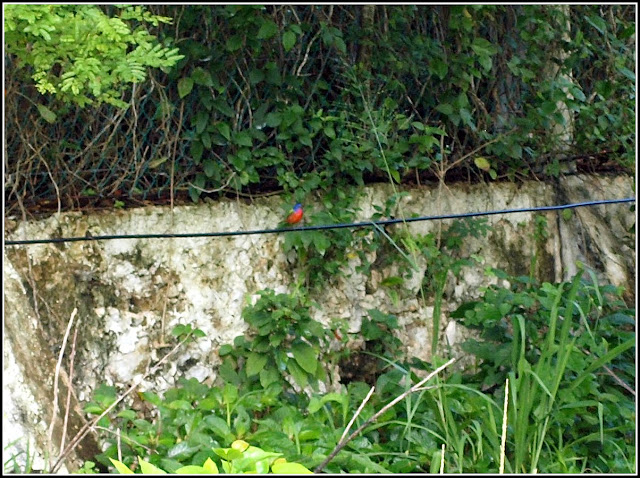 We also saw Mockingbirds (though we didn't realise this until later), and many different types of seed-eaters, finches and orioles. One evening as we sat on our balcony watching the sun go down a Hummingbird visited the flowers growing on an adjacent balcony. I know that this will seem unremarkable to many of my readers, but it was a significant event for us!

One of the birds we had been hoping to see was the Pelican. We did see a couple as we lazed on the beach, but they were just flying swiftly past and there was no opportunity to photograph them. Fortunately, as we were waiting for the ferry from Cozumel to Playa del Carmen on the day we departed, a Pelican put on a very fine fishing display right in front of us. 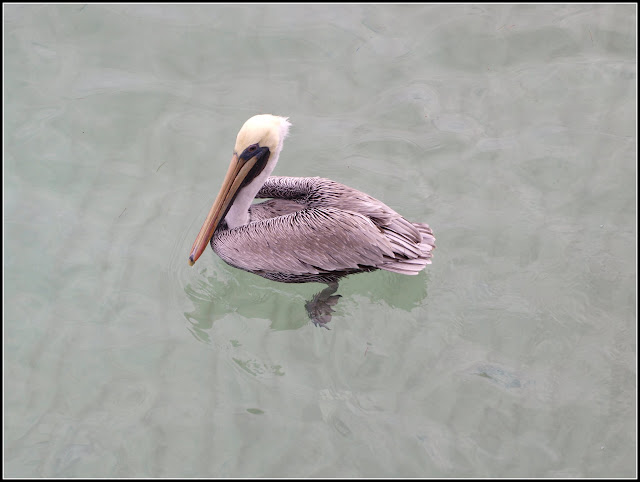 I don't know how many fish a Pelican eats in a day, but this one caught a lot of fish in the 15 or 20 minutes it spent near us, diving repeatedly off the jetty into the clear waters below and coming up each time with a fish in its beak. 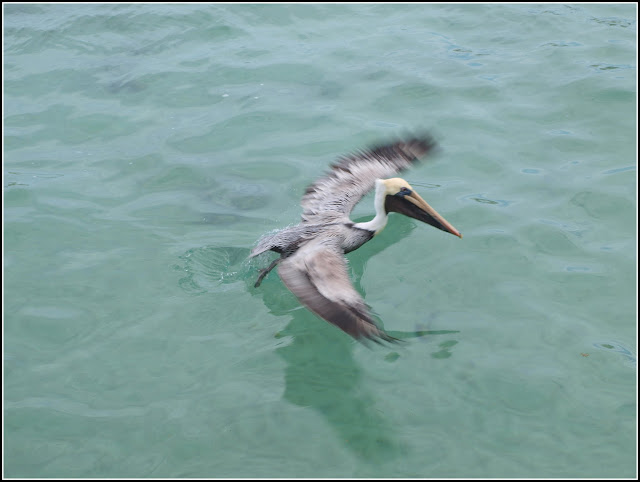 Just for the record, I also want to mention that we saw a magnificent Heron, fishing off the beach right in front of the hotel, and a big Snowy Egret catching frogs in the ditch beside the road after a rainy night. On one of our walks we watched a Yucatan Woodpecker doing its thing  - pecking wood, that is. Unfortunately, no photos of these! Likewise, no photos of the numerous Gulls, Terns and Frigate-birds that constantly swooped and circled above us on the beach.

The most common animal type in Cozumel seemed to be the lizard / iguana / gecko. They were everywhere. Every rock, bush or wall seemed to have its own lizard population. Here are a couple of photos to represent this. Firstly a tiny one, sunning itself amongst the stone tortoises for sale in the Garden Centre we visited. 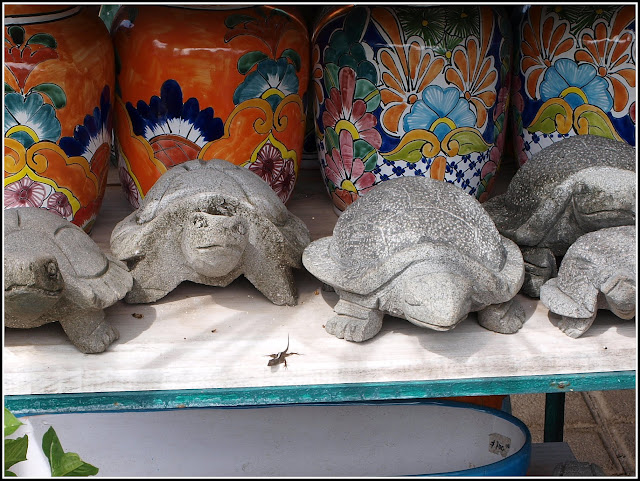 And then this bigger one, resting on the tangled roots of a fig tree. [Photographed through a chain-link fence.] This one was about 18 inches long from nose to tail. 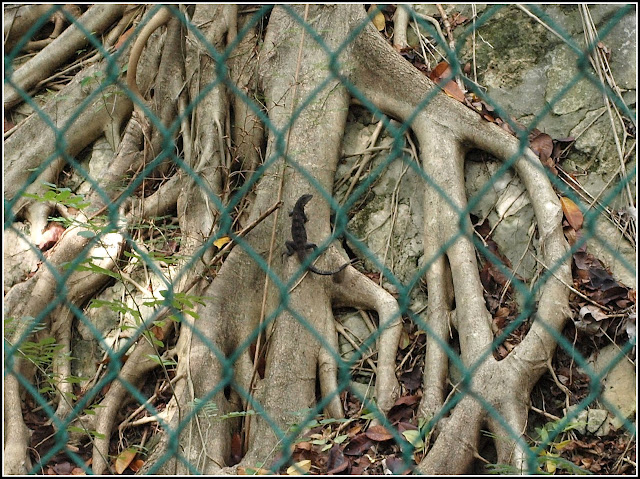 I would like to have taken lots of photos of butterflies and moths too, but you know how it is, they are mostly too busy to sit still long enough to be photographed... I was quite pleased to get this one, until I realised it was dead! It is a Pipevine Swallowtail - battus philenor. (Underside). 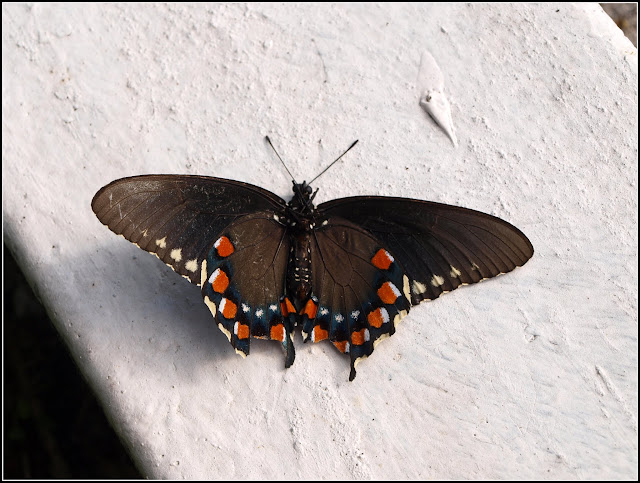 This one definitely wasn't dead, but luckily it flew very slowly and I was able to get a few decent shots of it. Researching it afterwards, I conclude that it is a Crimson-patched Longwing. 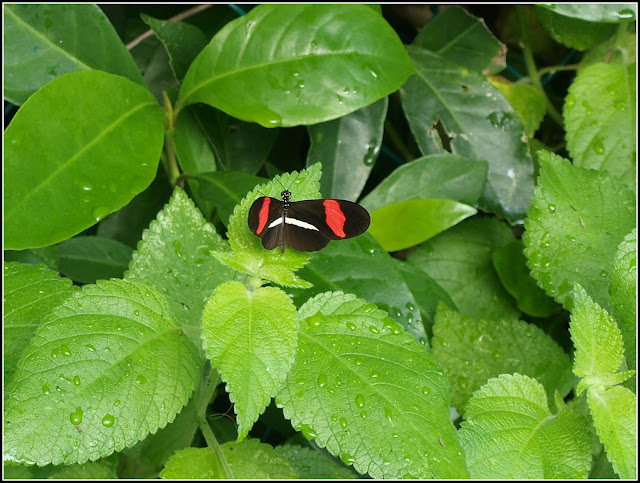 Moving on to some flora now, I'll start with this palm tree, photographed from the rear balcony of our hotel. It had huge bunches of fruits, some of which were ripe and red. It looked a bit like an Oil-palm tree, but the fruits were much smaller. 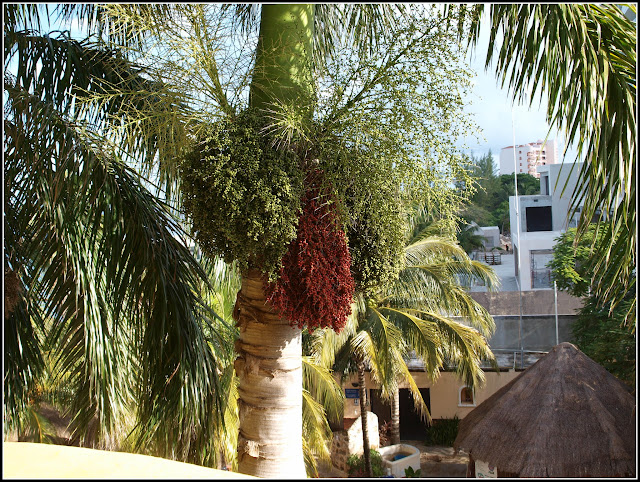 The gardens of the hotel were well maintained, and full of lovely trees and shrubs, like this magnificent Croton: 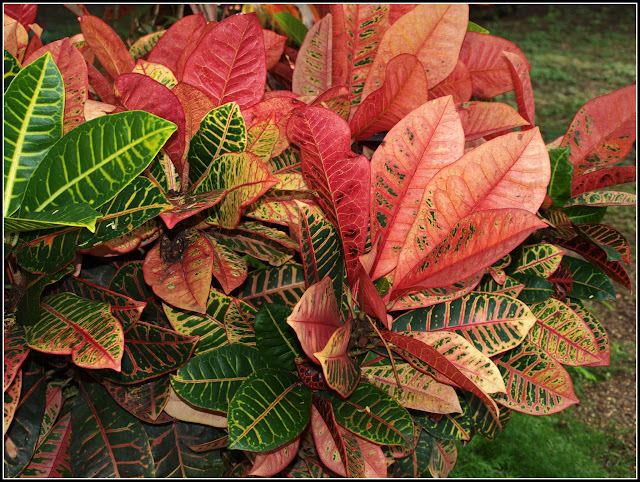 The main road between the hotel and the town was lined with spectacular Flame of The Forest trees, like these. 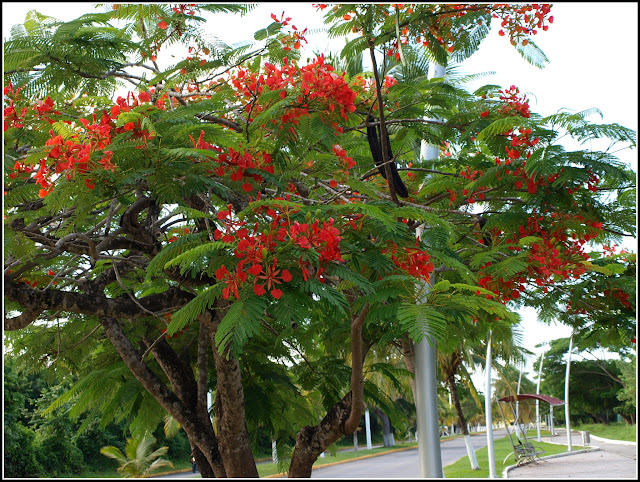 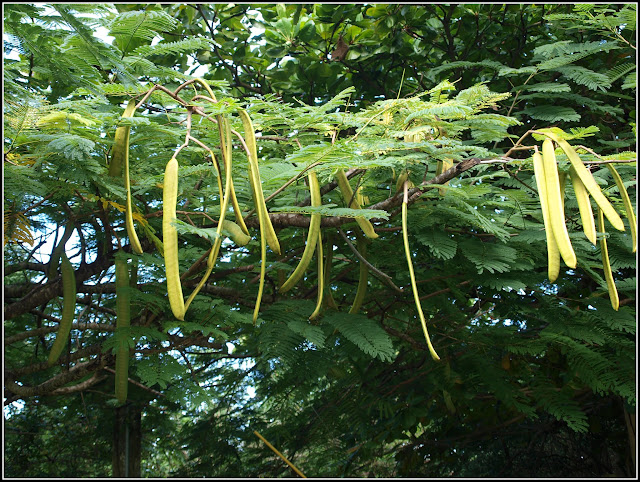 These little pom-poms are, I think, the flowers of an Acacia or wattle tree of some sort. They are evidently very attractive to bees...


This next type of tree was also very much in evidence in Cozumel - the Tropical or Sea Almond-  terminalia catappa. The big seeds have flesh on the outside, and a kernel in the middle but between those they have a fibrous layer a bit like the husk of a coconut. 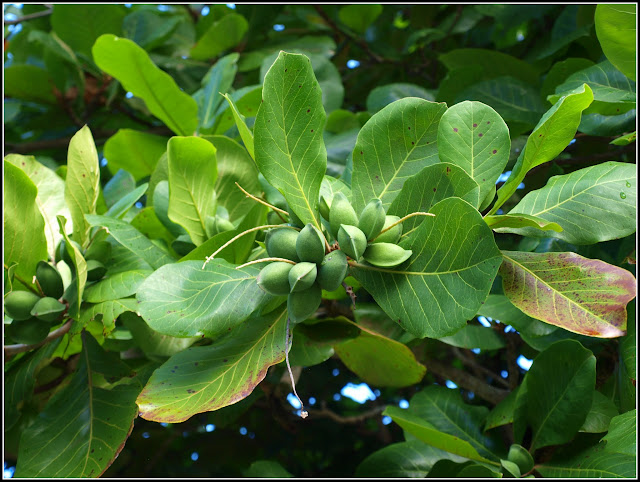 Here's a plant which is common in most tropical areas - the Lantana. Most of the ones we saw had orange flowers, although I know they come in a variety of colours, including red and purple. 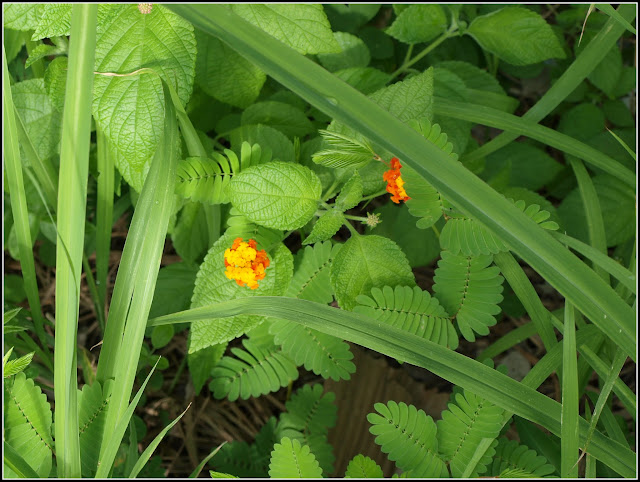 This is an Hibiscus, another flower very common in the tropics. (Also the type of flower that our chambermaid used to decorate those lovely towel statues she made!). 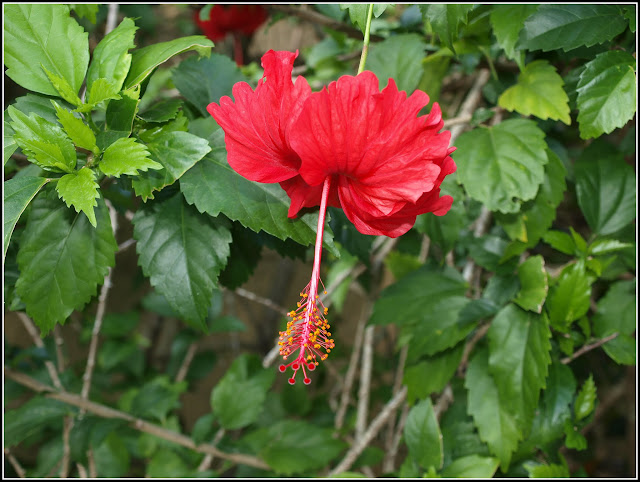 This is another type of Hibiscus. 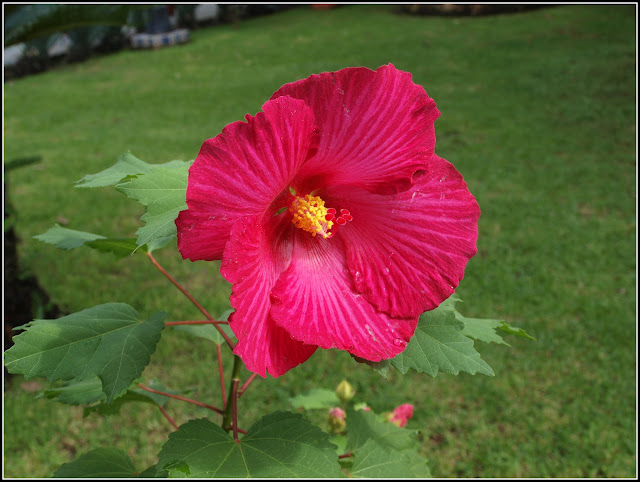 Most readers will recognise this too - the Caladium, aka Elephant's Ear plant. 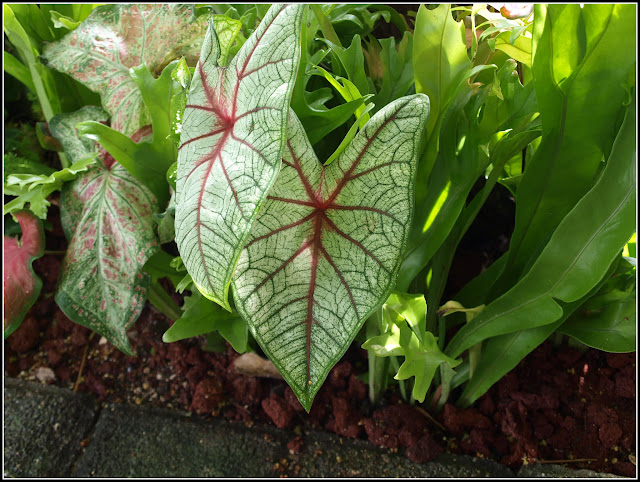 But what is this? Anyone know?


It grows as a creeper, entwining itself among the branches of bigger trees and shrubs. The flowers are reminiscent of the seed-heads of a Clematis. 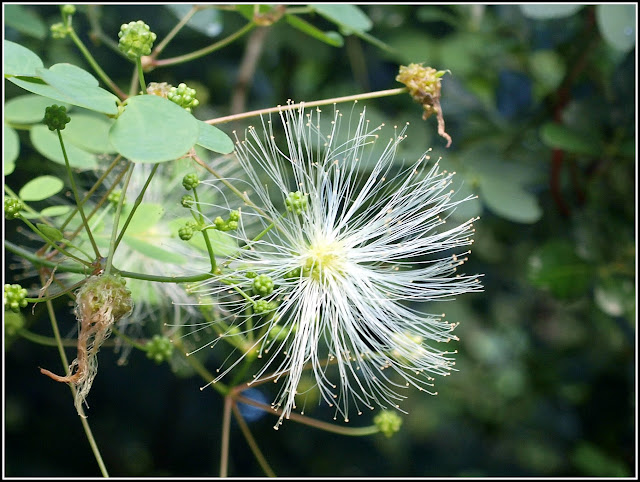 And what about this?

And this? A type of orchid maybe?


To end this post I want to make mention of something else that is vaguely flora-related: coffee. During a wander around San Miguel we came across the premises of Coz Coffee, a business founded and run by an enthusiastic American gentleman (very proud of his product). They bring coffee beans down from Zongolica (lovely name) in the Veracruz province, where they have been grown at an altitude of more than 4000 feet above sea level, and then roast them in small batches (less than 4kg) to make what is allegedly a very special coffee, equal to the best Jamaican Blue Mountain beans. Of course we had to buy some... 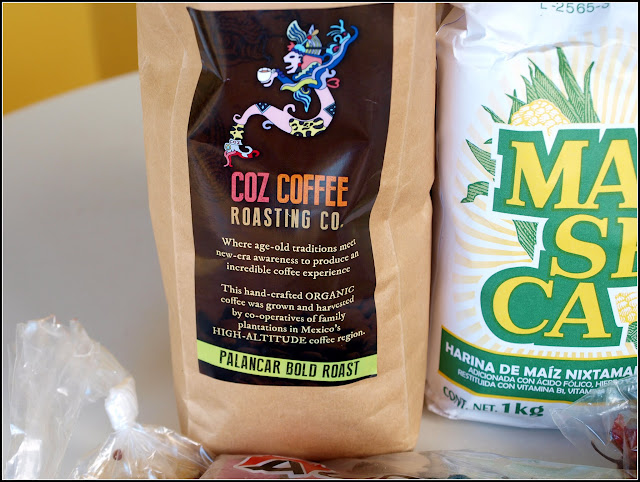 I haven't yet tried it, but if aroma is anything to go by, it will be very good indeed. You know when you come home from a holiday your suitcase is filled with smelly laundry? Well, this time, my smelly laundry was overpowered by the delicious aroma of coffee!