A holiday in Mexico - Part1

If you have been wondering why I have been so quiet in the Blogosphere recently, it's because we have just returned from a holiday on the island of Cozumel, in Mexico. I have now got so much to write about that I hardly know where to begin! 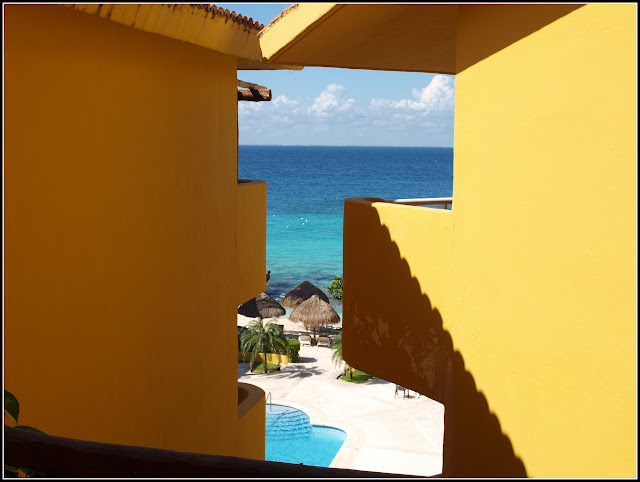 I suppose the best place to start is by saying that the holiday (7 nights in resort, with a day at each end spent travelling) was a prize that Jane won in a competition run by KanKun, makers of chilli-based hot sauces, and sponsored by the Mexican airline AeroMexico and Cozumel Fest 2015 (a Scuba diving festival). Due to the distance and the complexity of the journey, the travelling wasn't much fun (about 24 hours in transit in each direction!), and the weather was a bit disappointing, but otherwise this was a really nice holiday. We stayed at a "boutique" hotel called Playa Azul, which is conveniently situated about 3km (a 5-minute taxi-rode) out of the main (only) town on the island - San Miguel de Cozumel. The hotel, one of the oldest on the island was small and friendly, very unlike some of the huge and faceless international hotels you find in so many holiday resorts. In this photo it's the low yellow one, not the massive high-rise currently under construction seen in the background. 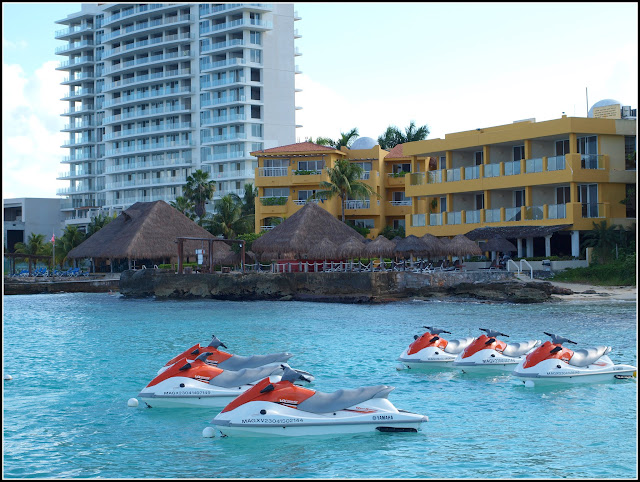 The hotel only has 50 rooms, and it seemed as if only about half of them were occupied whilst we were there, so it was very quiet. This suits us well. There was definitely no need to get up early to "bag" a sun-longer! 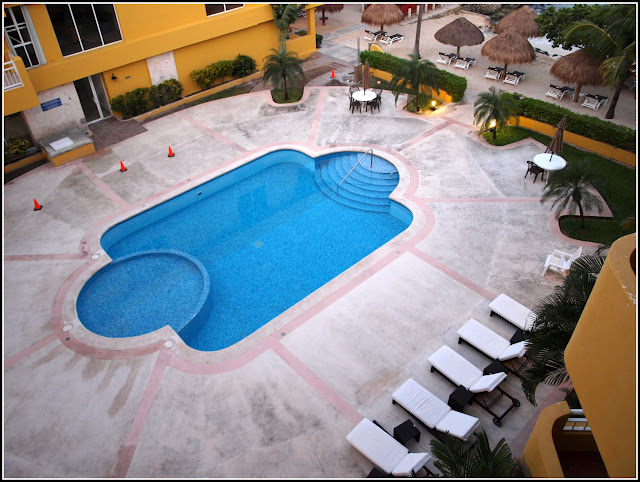 I said that the weather was a bit disappointing. There was more cloud than we had expected, and some occasional strong wind and rain - but thankfully not every day. Just look at the colour of the sky here...! 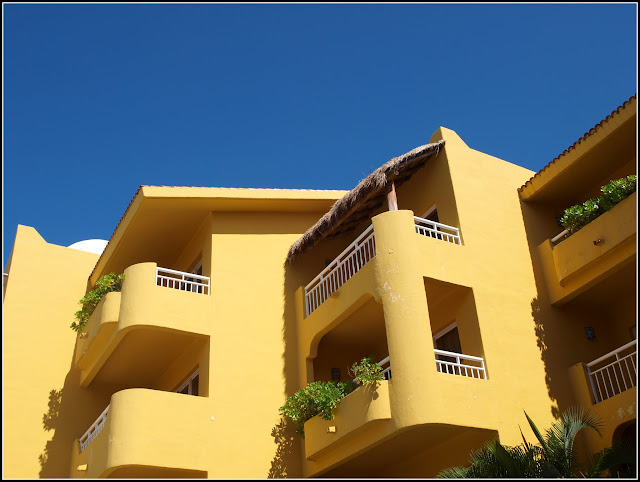 Our balcony was the one with the thatched roof seen in the photo above, and here is the view from it. 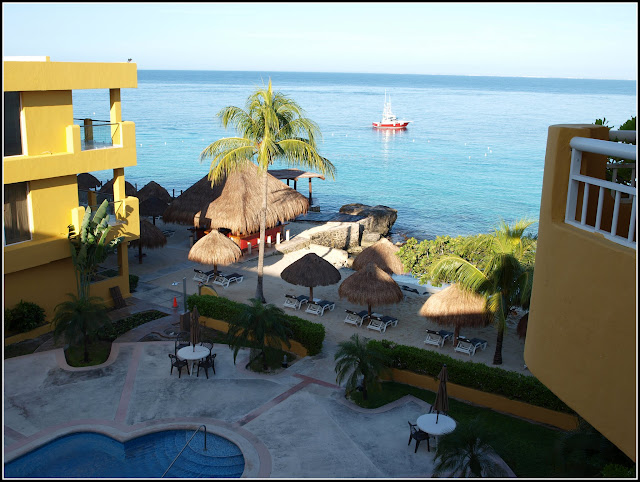 However, this was our view for much of the time. The sound of waves breaking on the beach is very restful, I can assure you. 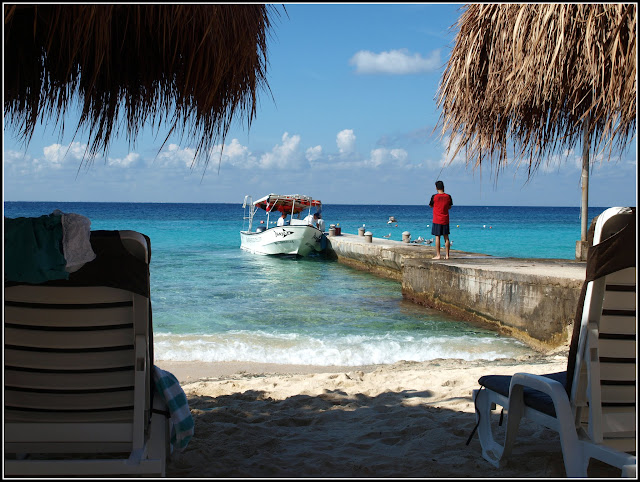 What we wanted most from this holiday was relaxation, and we certainly got that. However we also got some very nice food, and you know how interested in food we are. This is a typical "snack lunch". 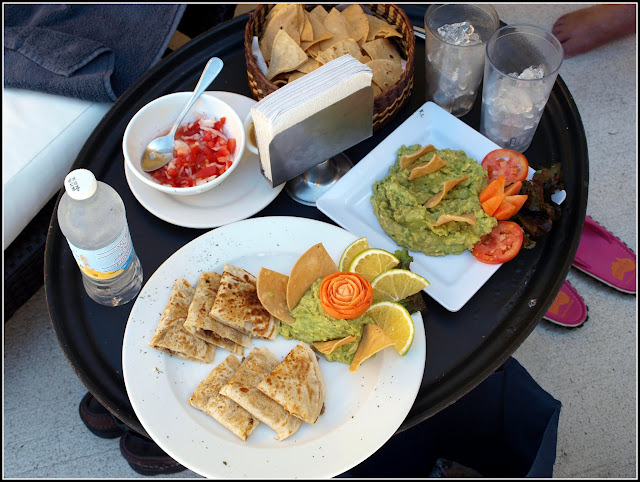 In the foreground you see a plate of Quesadillas - a sort of cheese pancake - and behind them on the square plate is a portion of Guacamole, served with the tortilla chips seen in the basket at the top of the photo. In the round bowl is a simple salsa of onion and tomato. The ubiquitous salsa in this part of the world is Pico de Gallo, which has coriander (cilantro) in it, but the hotel kindly made it without the coriander for me (I am allergic to coriander).

The meals served in the hotel were simple but very much to our liking. We especially enjoyed the variations on the theme of the tortilla  - enchiladas, tacos, burritos etc, and the black beans and guacamole with which they were usually served. I'll be writing separately about these later.

Just for the sake of variety we ate one evening at a little restaurant (shack!) just across the road from the hotel. The specialities of the house were lobster, shrimps and steak. We had a very nice meal there but it was no better than the food in the hotel and about three times the price, so we didn't go back. The company wasn't so great either - a large all-male party of Canadian golfers, who were evidently not on their first drink when we arrived, and were still going strong when we left.  The most popular choice of dessert in this restaurant was Key Lime Pie obtained to order from the "factory" right next door... 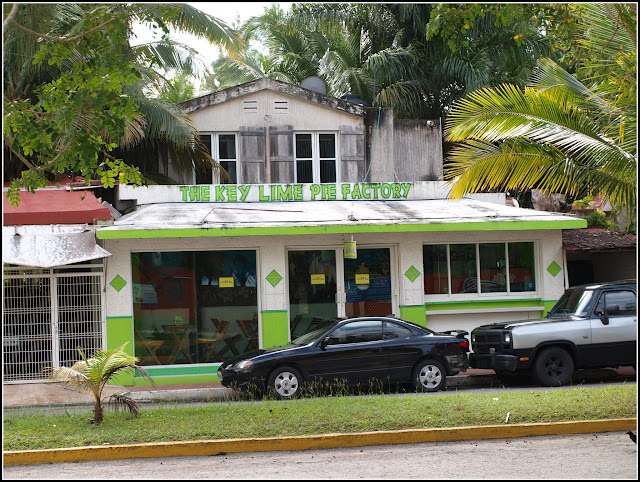 We did go into San Miguel a couple of times, and found that most of the restaurants there are aimed primarily at the tourists who come in on the big cruise ships, (i.e. offering mainly Lobster and brightly-coloured cocktails) but if you shop around a bit you can find some excellent Mexican food at very reasonable prices. 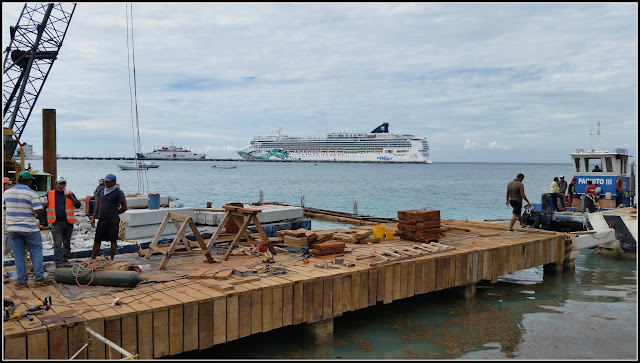 I'm sure there are eateries aimed at the local population too, but finding them probably requires a guide, and in our case a translator, since neither of us speaks much Spanish.

Talking of which, I wouldn't mind having a translation of the inscription on this plaque which stood on the beach near our hotel: 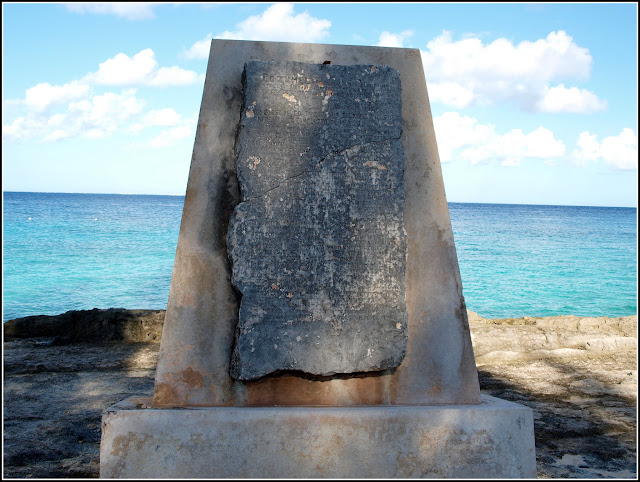 My Spanish is too rudimentary to understand much of it, but I was able to make out references to Hernan Cortez, the Spanish conqueror of Mexico who visited Cozumel in 1519. If you are interested in the history of this time, you can find useful information about Cortez's reasons for visiting Cozumel HERE. 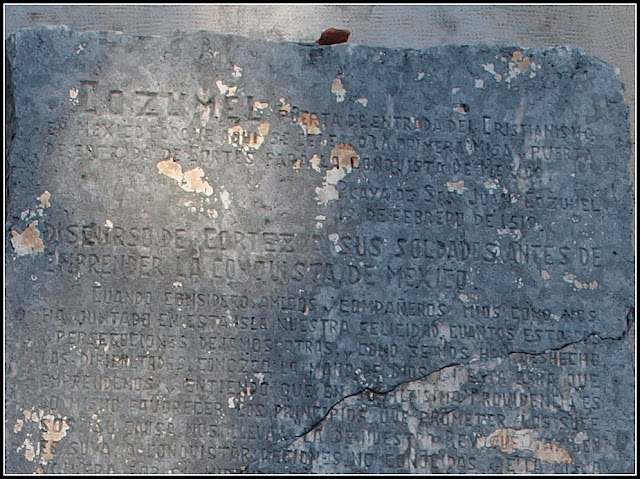 Before I finish today I want to mention one other charming aspect of our stay at Playa Azul. Each day, when she made up our room, the chambermaid made us a "statue" using towels adorned with fresh flowers - such as this amazing Lobster: 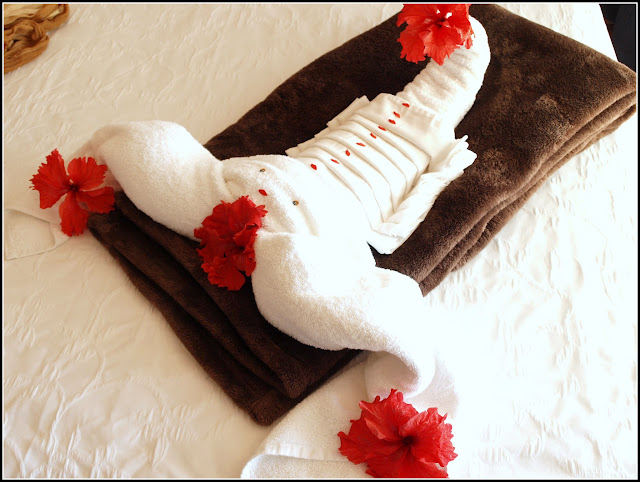 She evidently had a wide repertoire: one day it was a Swan, then it was an Elephant, then a Butterfly - even a very saucy-looking reclining Pig!

In another post I am going to describe a trip we made to explore the town of San Miguel, and maybe in another I will write about some of the flora and fauna. Back soon then!