This may well be the first of several posts inspired by the food we experienced while on holiday recently in Mexico. I have been itching to have a go at using some of our new ingredients - especially the toasted Pumpkin Seed powder, and the proper Masa Harina. 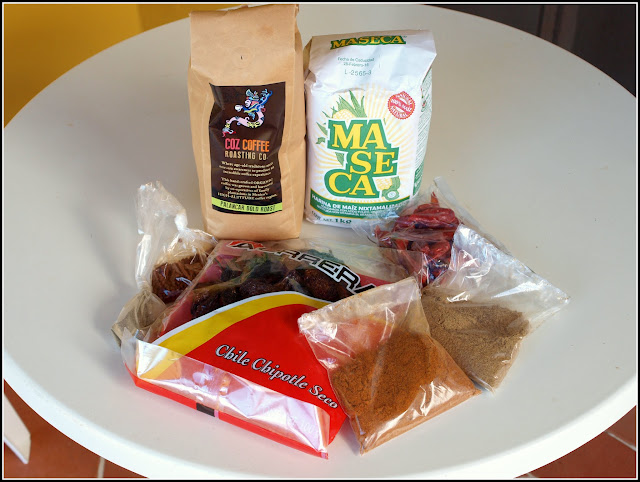 This is one of the best reasons for going abroad on holiday: we always come back with ideas for new meals, even if we don't have any specific recipes. I think Jane and I are sufficiently competent with cooking that we can generally produce a reasonable approximation of most meals we have eaten (the one at Benares excepted!).

In the past the "Mexican" dish I have cooked most often is Pork with Black Beans and Chipotle, which is really very nice indeed, but this time I was determined to do something different. This is what I ended up with: 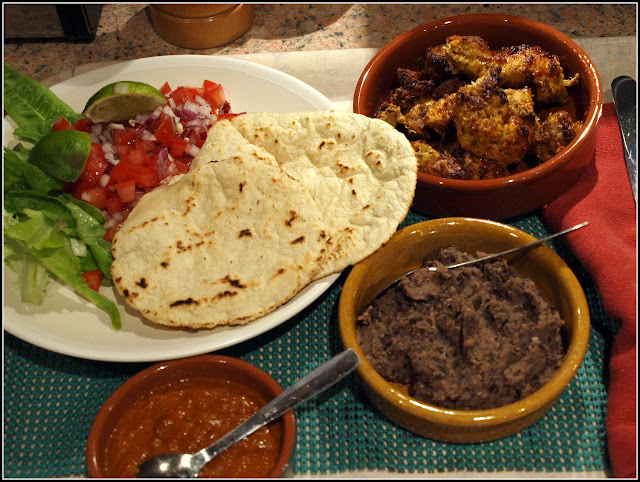 The idea was to wrap the pieces of grilled pork in a tortilla smeared with black bean paste, smother it in chipotle sauce, and eat it with one's hands...

My first task was to cook the beans - which had been soaking in water overnight. It takes about an hour and a half to get Black Beans to go really soft. When fully cooked you should be able to mash them easily with a fork. 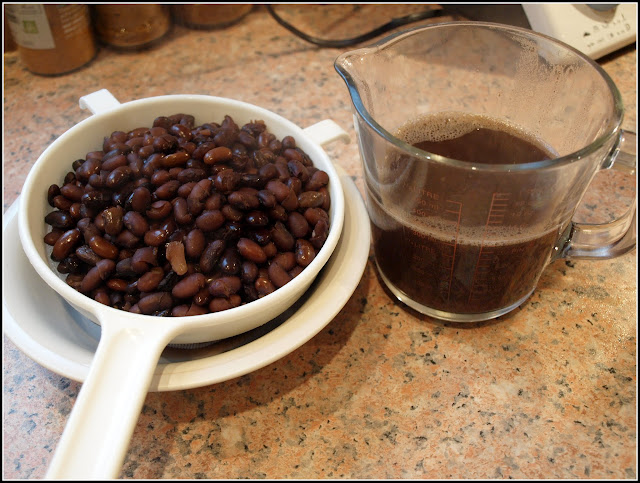 Once they were cooked I blitzed them to a coarse paste in the food-processor, adding a teaspoonful of the toasted Pumpkin Seed powder, and some salt. I used a little of the reserved cooking-water to achieve the desired consistency. I had used 200g of dried beans, which made far too much paste, so I put half of it in the freezer for another occasion. 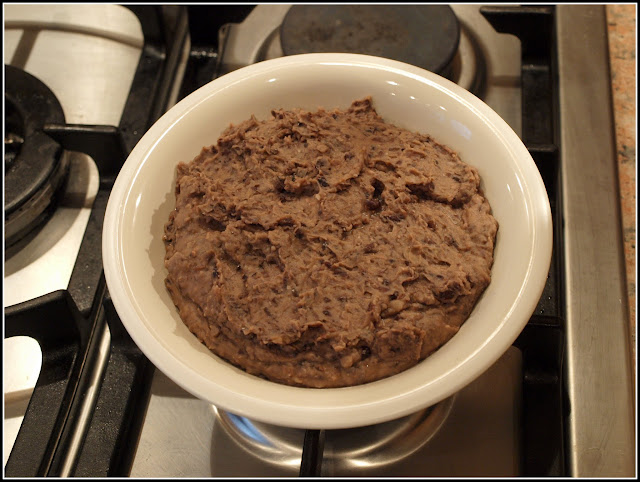 The Black Bean paste doesn't look very pretty, but let me assure you it tastes an awful lot better than it looks! The texture is nice too: almost creamy. I served it warm, but I will confess that I tried some cold, and it was still very nice.

While the beans were cooking I made my Chipotle sauce. Again, I had anticipated the requirement and put six dried chipotle chillis to soak in warm water for a couple of hours beforehand. When they were soft I removed the stems and most of the seeds, and cooked them up in a small frying-pan with some chopped onion and a few other flavourings - some of the Mexican All-Purpose Seasoning we had bought in the market in San Miguel de Cozumel, some ground Coriander, some ground Cumin and a little of the Annatto seed (again from the market). The latter was mainly to add (red) colour; I don't think Annatto has a very strong flavour. 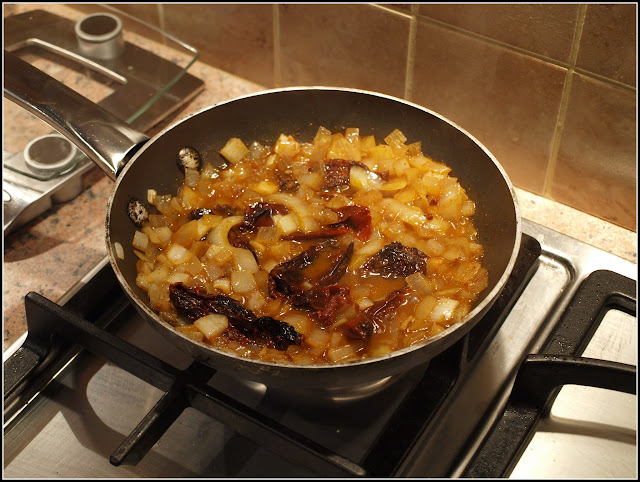 After cooking this mixture for about half an hour over a low heat, I blitzed it to a thick paste in the food-processor. At this stage it was a bright orange colour and surprisingly pungent. I returned it to the pan and added about 100ml of Elmlea to tone it down a bit (you could use light cream of course). Once the cream was thoroughly incorporated the sauce was complete, so I transferred it to a bowl which I covered in clingfilm and refrigerated for later. Just before serving I warmed up the sauce in a small saucepan, reserving about a quarter of it for basting the pork. 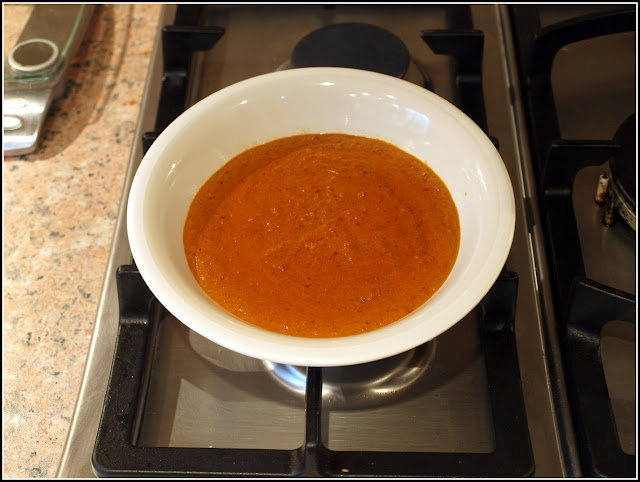 My diced pork was marinated in a mix fairly similar to the Chipotle sauce (I used Chipotle powder this time), but with the addition of chopped fresh Ginger and crushed Garlic, and a couple of crushed dried Mexican chillis (don't know what type - they are small, red ones), all moistened with a tablespoonful of vegetable oil.


I massaged the pork in the marinade to ensure that it was thoroughly coated, before covering it and allowing it to stand in the fridge for about 8 hours.

For the tortillas, I used the same procedure as usual, making a simple dough with Masa Harina and water. The dough should be of a consistency like Play-Doh. And of course I used my trusty "Estrella" Tortilla-press (made in Mexico). 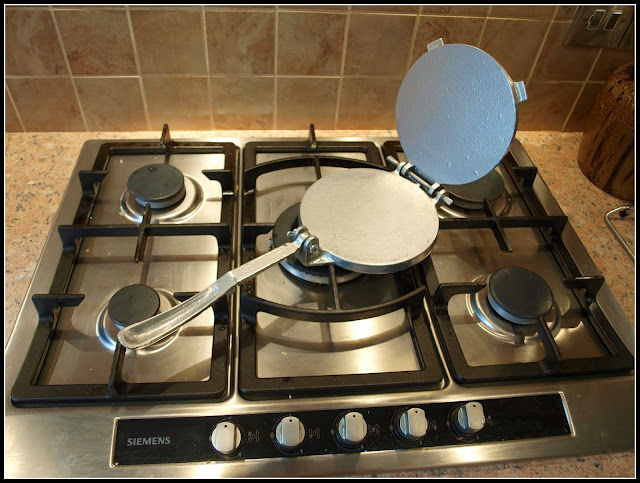 The results proved beyond doubt that my tortilla-making technique had been correct all along, but what was lacking was the right flour. Ordinary wheat flour will just not do.

This time my tortillas were really tasty and above all - reasonably soft, which is something I have never previously managed to achieve. I'm already looking around for places to get more Harina de Maiz without having to pay a fortune on postage. 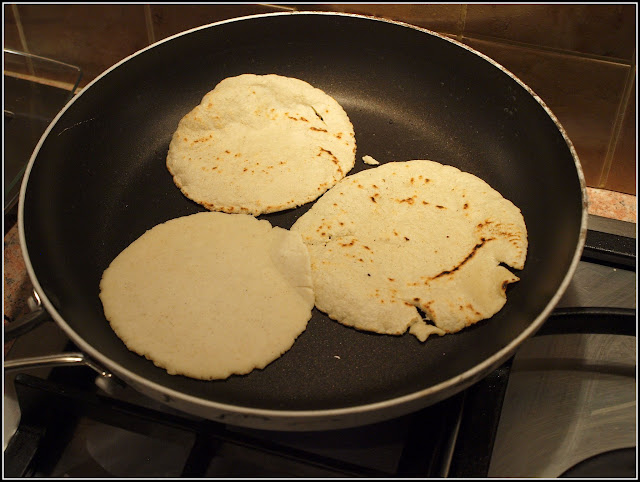 The procedure for cooking the pork was exactly what you would use to make satay or brochettes - thread cubes of meat on skewers and cook them under the grill, basting occasionally with some of the Chipotle Sauce. 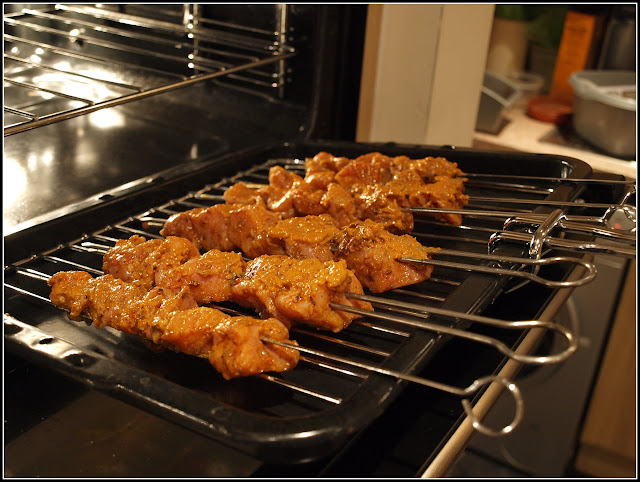 When we were in Mexico we ate baked plantains a couple of times and really enjoyed them. Since plantains are quite hard to find here, I tried the same technique with some ordinary bananas. I simply cut them in half, slit their skins, put them in a bowl and bunged them in the oven at 180C for about 30 minutes. The skins went an alarmingly black colour, but inside the fruit was beautifully soft and sweet.

The final element of the meal was some salad. I served a red onion and tomato salad and some home-grown lettuce. A few wedges of lime to squeeze over everything completed the line-up. 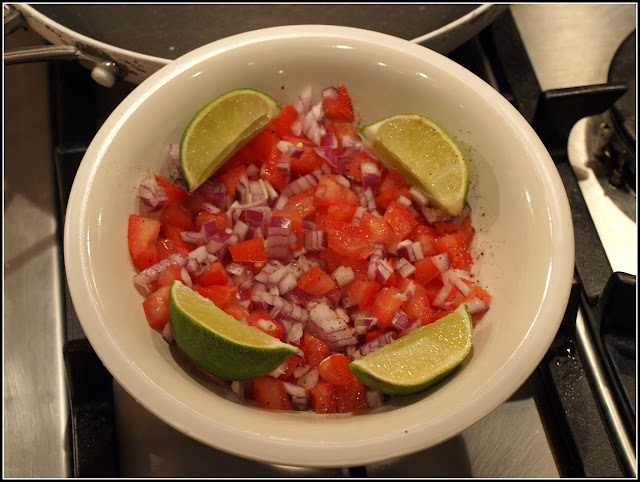 So here is the finished meal: notice the blackened bananas, and the pork removed from the skewers (top right). In the foreground are bowls of black bean paste and Chipotle sauce. 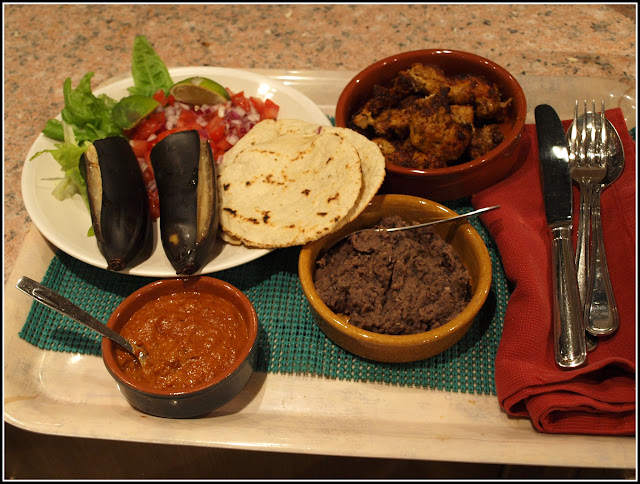 You will notice that we were eating off trays. We do this most of the time, not only so that we can watch the TV while we eat (cookery programmes, such as Masterchef, of course) but also because the Dining-Room table is usually submerged in craft materials!

I was pleased with the results of my efforts, with one exception: the Chipotle sauce was really too hot for our taste - much hotter than I had expected. I normally think of Chipotle as being quite mild, but it wasn't this time. In retrospect this is probably because I normally use the chillis as a flavouring, removing them from my dish before serving, rather than eating them. If I do that sauce again, I'll put half as many chillis in it. The greatest revelation though was the black bean paste. This has now officially been added to our culinary repertoire!
Posted by Mark Willis at 12:00