In the Spring of this year I re-potted most of my Blueberry plants and pruned them quite severely in order to re-invigorate them. It certainly worked, and the plants put on a fair bit of new growth. Blueberries fruit on the previous season's wood, so I'm hoping for a better crop in 2016. Now that all the leaves have fallen off, I just needed to give the plants a trim to keep them reasonably compact.

I used as a guide the advice given on the RHS website. It suggests pruning Blueberries between November and March - their dormant period. The aim is to cut out about a third of the stems every year, so that there is always some new growth for fruiting, and never any stems that are too old and woody. It's easy enough to tell which is the old wood, because it is brown, whereas the new growth is initially yellowish green and then red.


If you are growing your Blueberries primarily for the fruit rather than the foliage, it is best to remove the twiggy growth which appears at the end of the previous year's stems. This will produce plenty of leaves, but few if any fruits.


My plants had all produced a few very long (4 - 5 foot) whippy branches, and I knew that this would present a big challenge when it came to protecting the plants from marauding Blackbirds, which love to steal the fruit when it ripens, so I snipped off about half of these long branches. 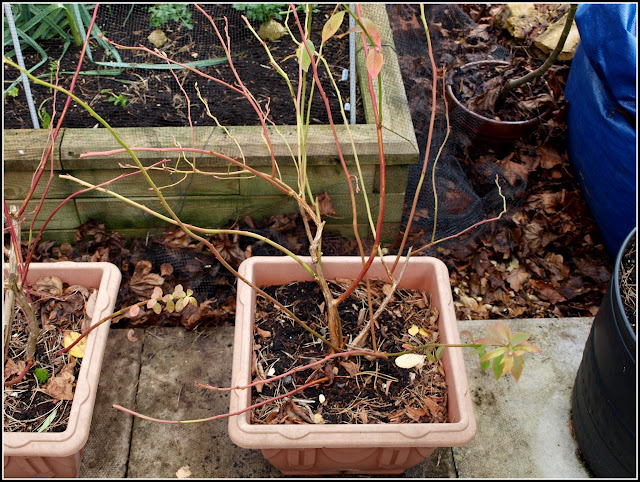 Most of the branches are now about 2 - 3 feet long, which seems about right to me. Nice compact bushes that will be easy to cover with nets, but with sufficient branches to produce a decent crop (I hope). 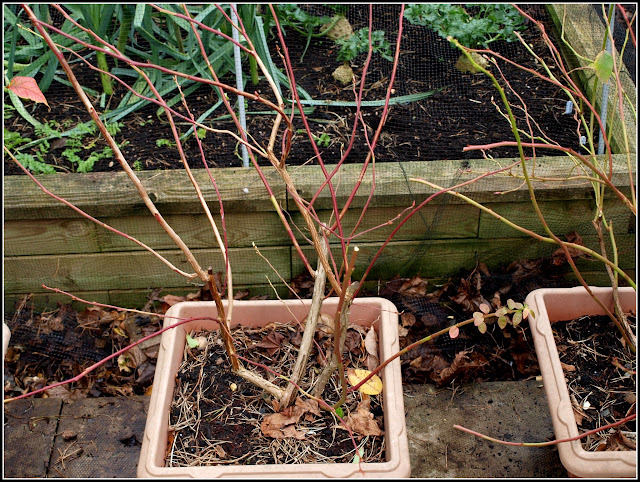 You will notice that there is a fair bit of leaf-litter and pine needles in the pots. Normally I would clear this away when tidying a pot, but Blueberries thrive in acidic soil / compost and pine needles will contribute a bit of acidity. For similar reasons it is best to water Blueberries with rainwater if possible, because tap-water contains lots of chemicals and is often very alkaline.

Here are my plants, lined up on the patio. I do have a fourth one (the one with pink berries) but it hasn't lost many of its leaves yet, so I am delaying pruning it until I can see better what I'm doing. 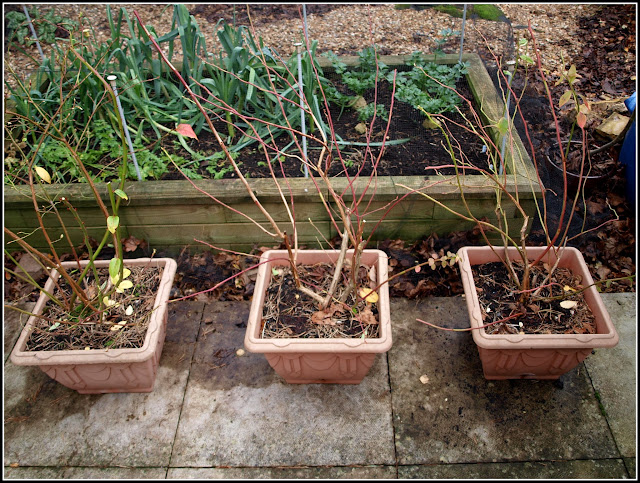 This time last year I had six plants, but one died during the Summer (cause of death unclear), and I discarded one at the time of re-potting, because it seemed very weak and unlikely to produce a viable crop. Still, I think four good plants is just the right amount for me, when I consider all the other things I want to grow!
Posted by Mark Willis at 12:00