As many of you know, Jane and I spent a few days over in France with our daughter Fiona and her family. We had a really good time together - Christmas is very special when there are grandchildren around - but our return was a real trial. Geneva airport was shrouded in persistent thick fog, and flight operations were severely disrupted. We had been expecting to get home by about 18:00, but in the end it was 01:30! Now, even I don't go out and inspect the garden at 01:30, but you can be sure that I was out there at the earliest opportunity. Even when I have been away only a few days, I always want to see how things are: has anything grown? Is there any damage? Is anything ready for harvesting? etc...

Well, the answer to the first question is clearly "Yes". The sideshoots on the Brokali have doubled in size in a week: 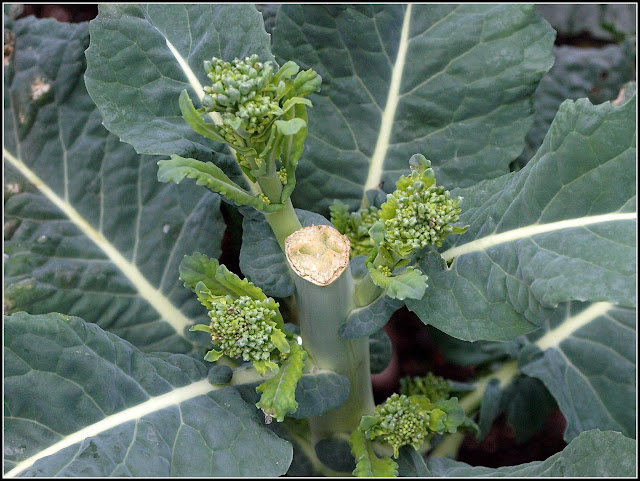 I was going to cut some Brussels Tops for our dinner until I looked closely at the plants. Before we went away I had thought one of the plants was effectively finished, and it seemed that only a few tiny sprouts remained. However, they have grown a fair bit this past week, and although still small, are looking OK. If I leave them a bit longer I think I will be able to get another meal or two from them. [These ones are currently about the size of a Hazelnut.] 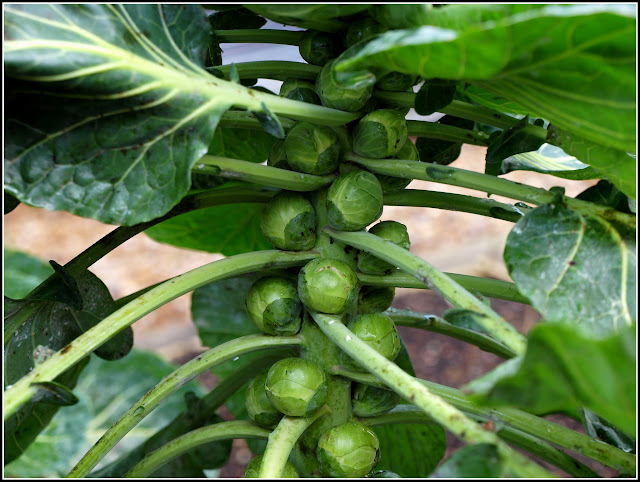 When I hold up the leaves you can see that the Whitefly are still very much in evidence too. They have been enjoying the mild conditions, I'm sure. 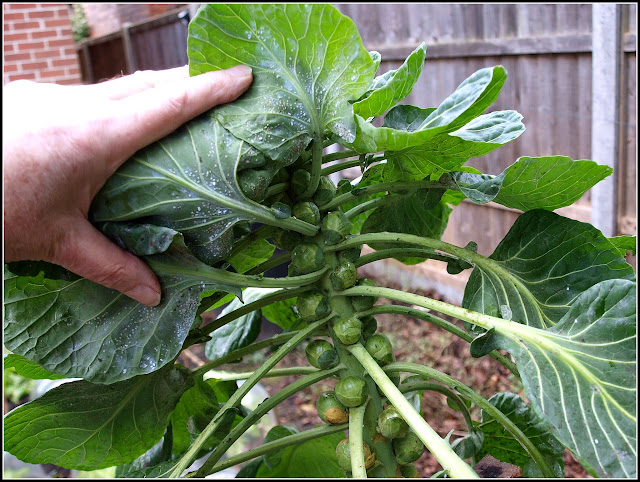 My next picking of PSB is not far away either. The "Red Spear" plant is looking very promising: 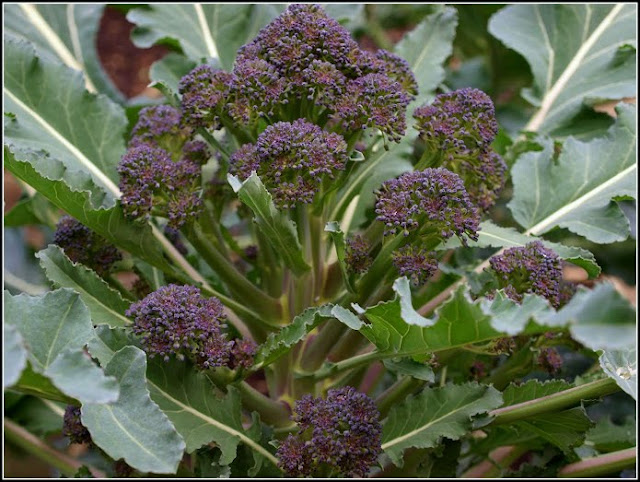 "Early Purple Sprouting" is further behind, but heading-up quite nicely. 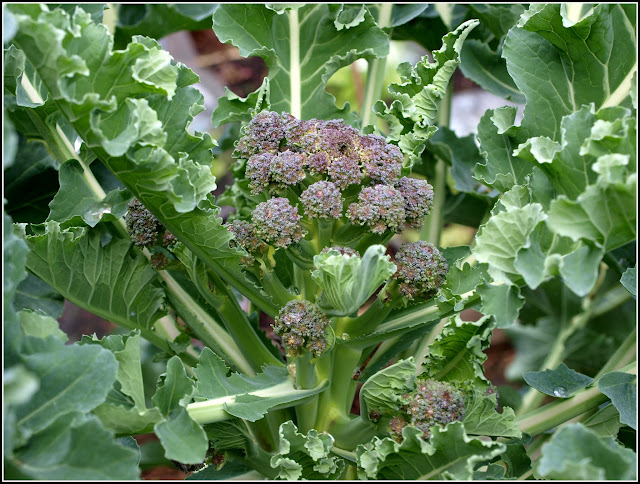 It looks as if all of my PSB is going to be over before the time when I would normally begin to harvest it!

As regards damage in the garden, the only casualty appears to be this clump of Parsley. A week ago it looked lovely and lush, but over Christmas it has been reduced to bare stalks. I think slugs are probably to blame. Hopefully it will survive and produce some new growth. 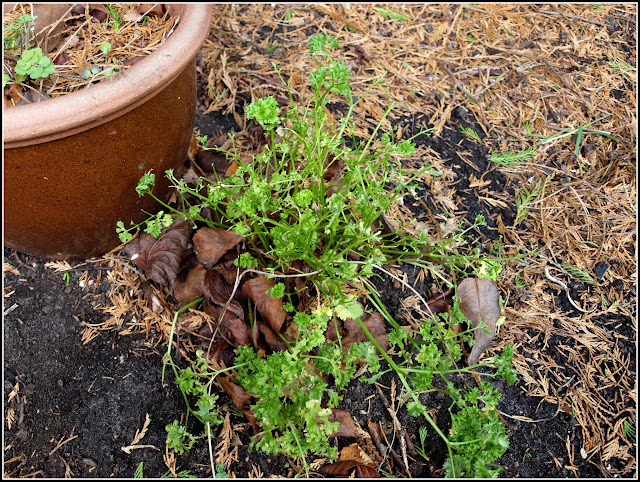 In the circumstances it is fortunate that some of the seeds from my Flat-leaf Parsley are beginning to germinate - as I hoped they would (I gave them a bit of a helping hand by scattering the dried seeds). 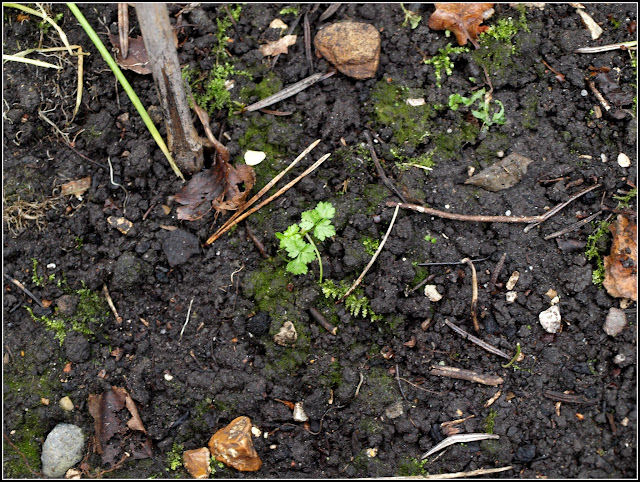 The Chives are coming up again too. 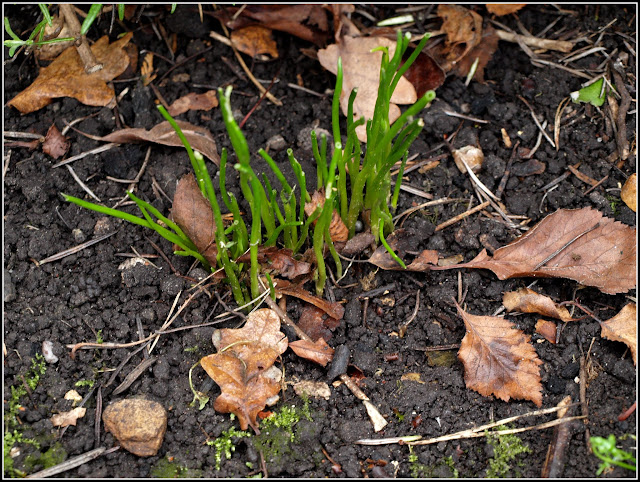 This is Winter Savory, a plant given to me by a Facebook friend with whom I met up in London during the Summer. It has decided to put on a big flush of new leaves: 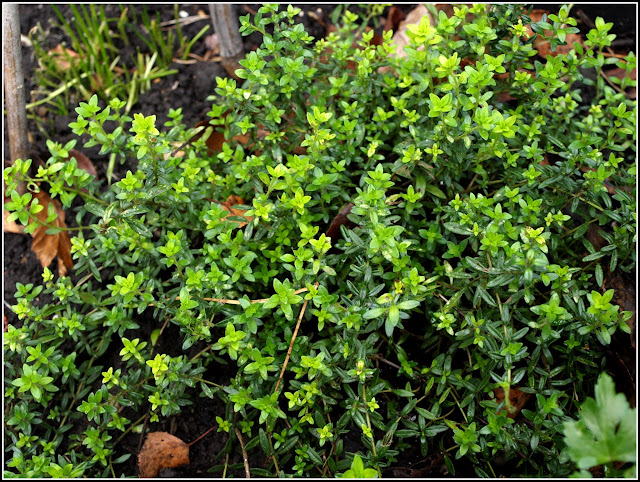 The Rosemary plants are also flowering now - though that is not unusual, they often flower at or soon after Christmas. 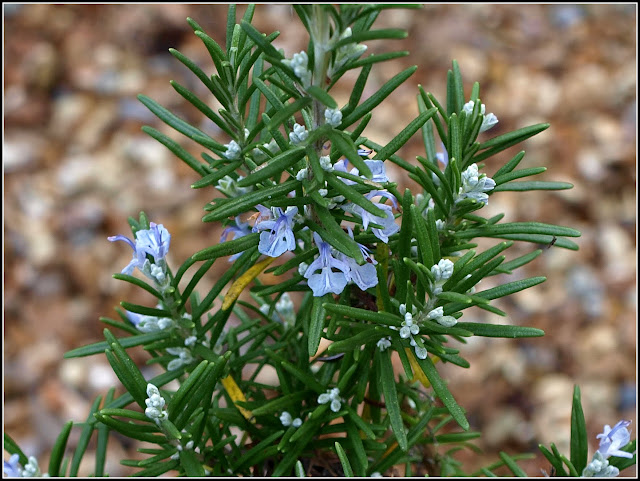 So, the garden seems to be fine. The only trouble is, I can't forget that the Christmas holiday is usually the time when I empty out at least one of my compost bins. Maybe this year I'll delay a bit, because I am intending to construct some more new raised beds in the Spring, and the compost will be very useful at that point.
Posted by Mark Willis at 16:00