A "Tagine" is one of these: 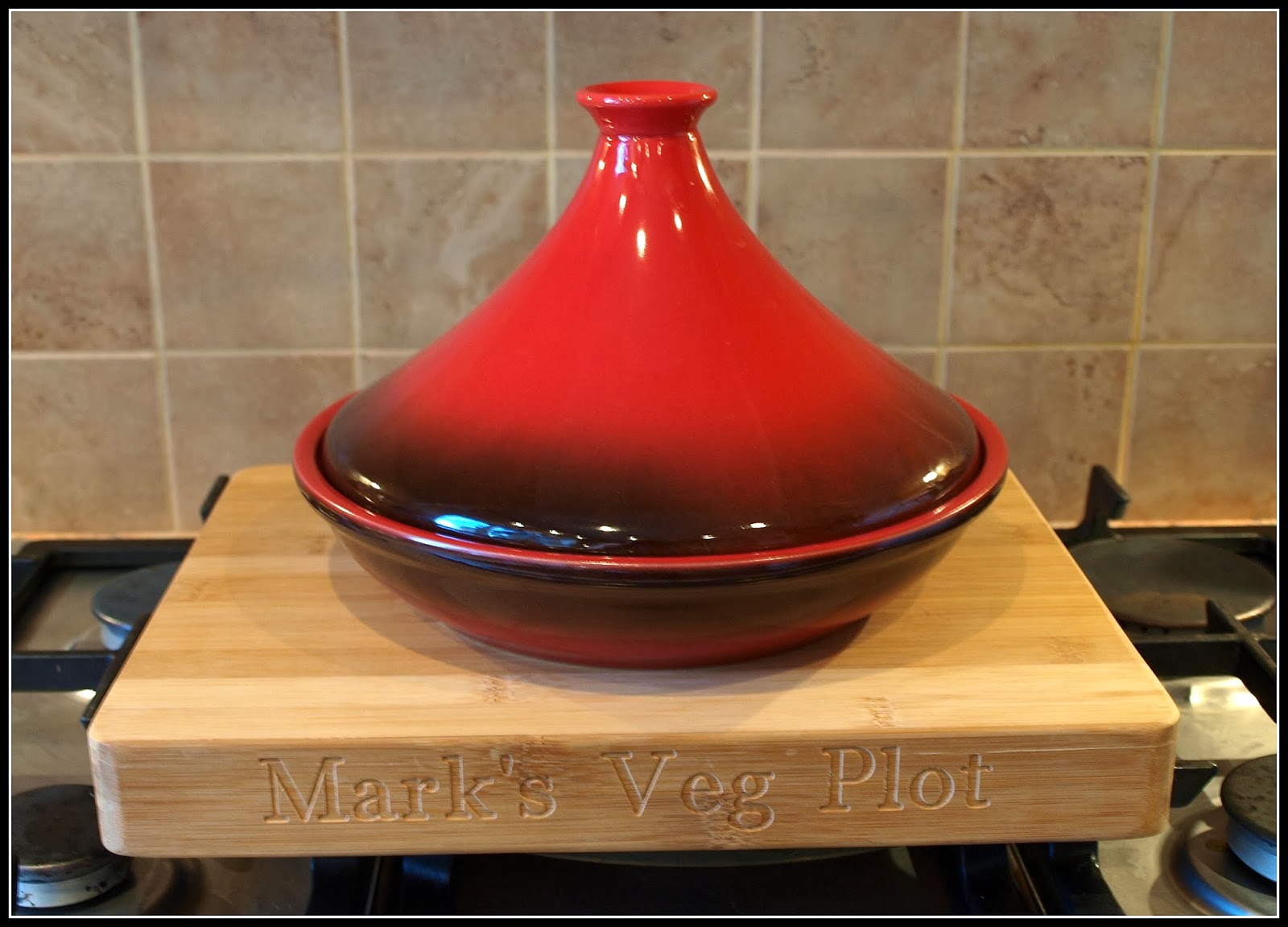 It is a type of cooking-vessel originally used by the Berber people of Morocco. It has given its name to a style of cooking which uses this type of dish - in much the same way as the word "Casserole" literally means a type of cooking-pot but has come to mean a type of slow-cooked stew. The Tagine is designed specifically to re-cycle the moisture in the cooking liquid: as the vapour rises to the top of the conical lid it condenses and drips back into the bottom of the wide shallow bowl.

This time I decided to make a lamb tagine, though sometimes we have a meat-free version with loads of different vegetables. My next photo shows the main ingredients. The lamb is fillet of neck, nicely marbled with fat which melts during the cooking process and makes the meat much more tender. The chief spices are the fragrant ones - cinnamon, cloves, and coriander - all in powdered form today. 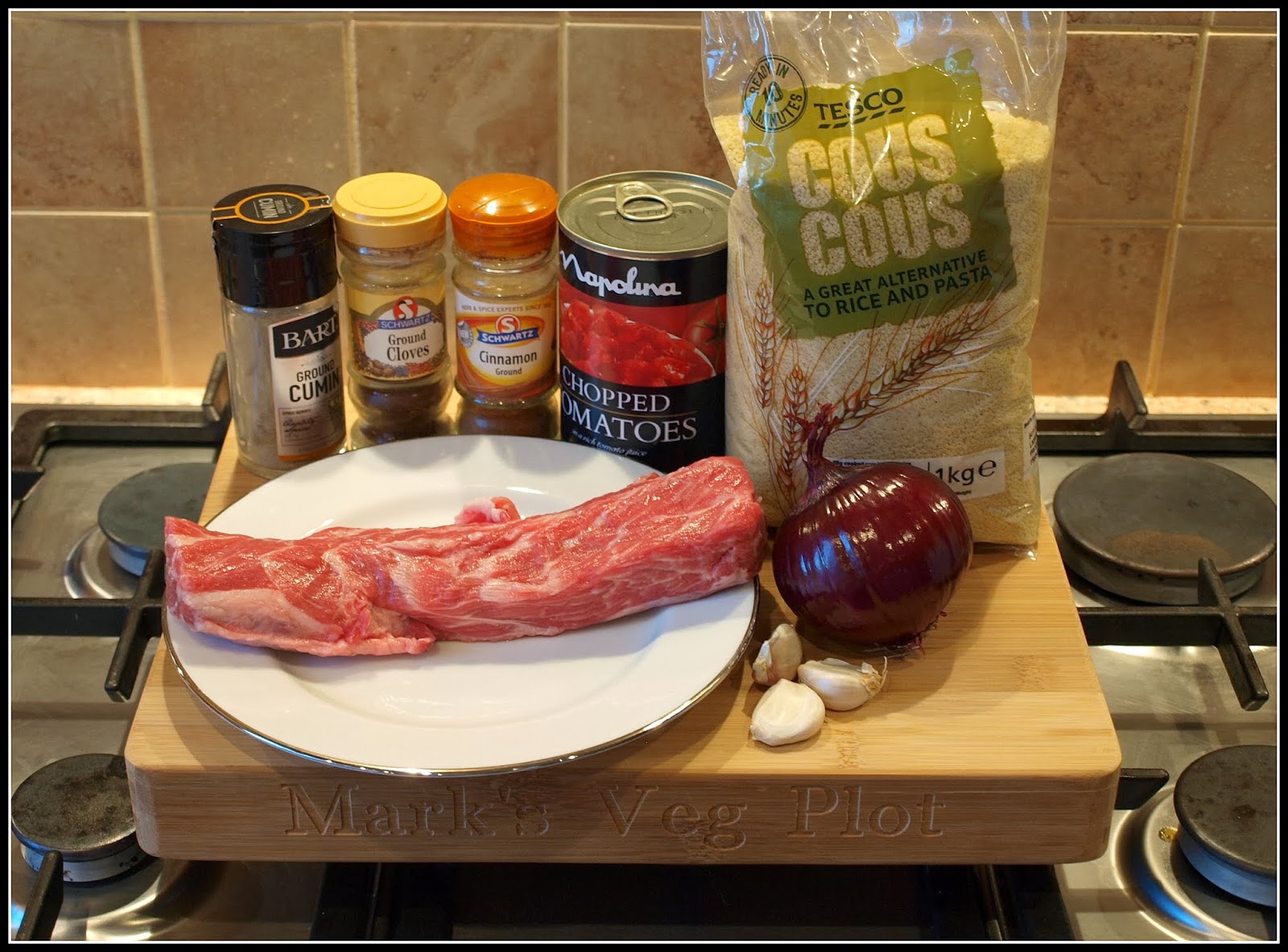 To give the dish a very North African feel I also used some Ras el Hanout (a typically Moroccan spice mix), and some Harissa (a fiery chilli-based puree, very much the same texture as tomato puree, and sold the same way too, in a tube). 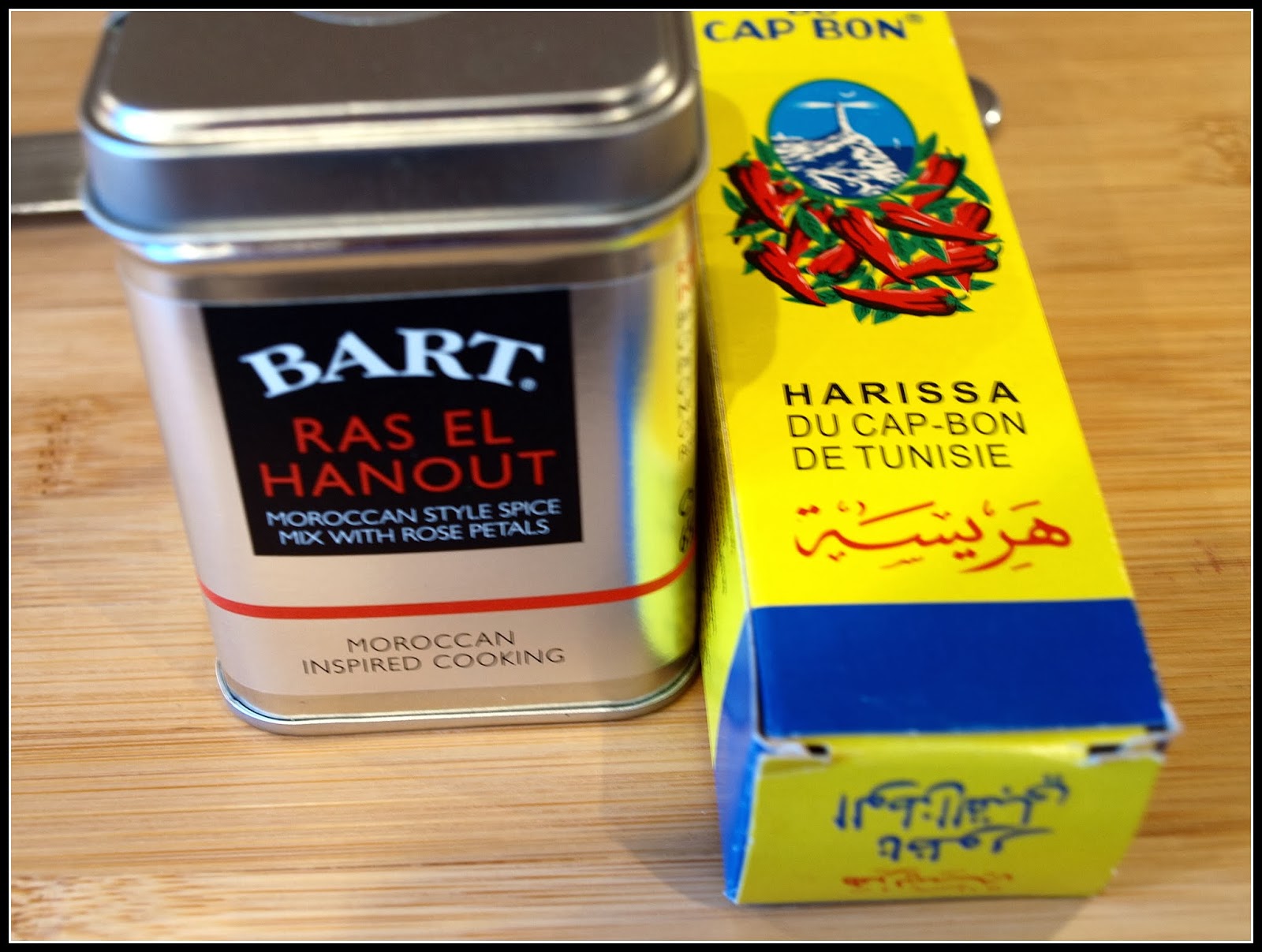 ﻿
The ingredients of the Ras el Hanout are listed as Black Pepper, Coriander, Ginger, Paprika, Allspice, Cardamom, Mace, Nutmeg, Turmeric, Cayenne, Cloves and Rose Petals (1%).  The name "Ras el Hanout" means literally "Head of the Shop", which implies that the shopkeeper has put together a mix of his top (best) ingredients. I'm sure there are lots of different variants of this, with each shopkeeper insisting that his own mix is the best!

I cut the meat into small cubes and put it in the fridge to marinate for about 8 hours in a mixture of the spices moistened with a little olive oil and augmented by some crushed garlic. This part of the procedure is not absolutely vital, but I think it gives the meat a much greater depth of flavour than if you cooked it without marinating it first.

Now an admission: I had never cooked in a tagine before. Jane has though, so I was as usual able to get some "consultancy"! As my culinary experience grows, I am becoming more confident and more adventurous with my cooking, so I try to rely less on Jane's superior expertise. Well, anyway, the key decision was how long to cook the meat for. If this was an ordinary lamb casserole I would have no problem with it, but using the tagine for the first time entailed a bit of the old "trial and error" technique.

I browned the meat in the usual way (the smell of the spices was amazing!), temporarily removed the meat from the pan while I sweated-down some chopped onion, then returned the meat to the pan and added a tin of tomatoes and some stock. At this stage you could add some dried fruit if you like - maybe some prunes, raisins, apricots or dates - I didn't though because I wanted to keep it simple. Many North African dishes aim to balance spiciness against sweetness, so adding fruit to them is very common. Next, I turned down the heat to a slow simmer, put the lid on the dish and left it to do its thing...


In view of the way the tagine dish is intended to work (see above), I felt it necessary to avoid removing the lid too often, which would disperse the steam, but I still had to check every now and then that the meat was cooking OK and not drying out. I think the knack is probably to allow a lot more time than you might at first think necessary, and cook the dish long and slow. In Morocco tagines are traditionally cooked over charcoal (which is not exactly famous for its ability to heat up or cool down quickly!), so I imagine it takes a fair few attempts to judge this bit accurately.

﻿
As it happens, the meat definitely did NOT dry out - on the contrary I think I added too much liquid. Once the lid was on and the tagine was simmering, a bit of the gravy did bubble out onto the cooker top. Next time I will only add a very small quantity of stock. It all made a lovely gravy though!

To accompany the tagine, I made some cous-cous using some home-made chicken stock, and added to it a handful of chopped fresh (homegrown!) Parsley, some Raisins and some Pistachio nuts. 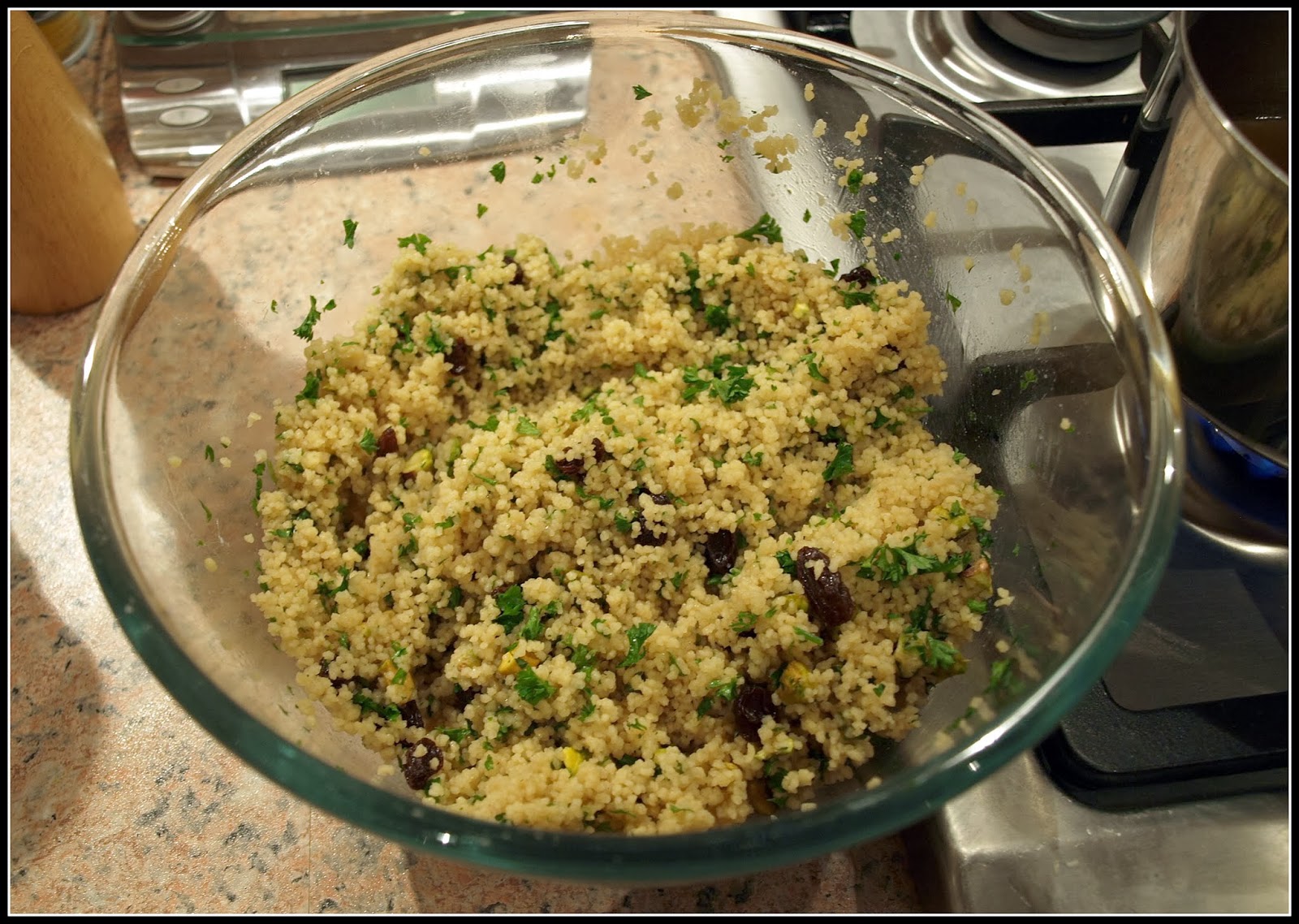 I also made two different salads. One of them was sliced red onions softened in red wine vinegar (garnished with more Parsley): 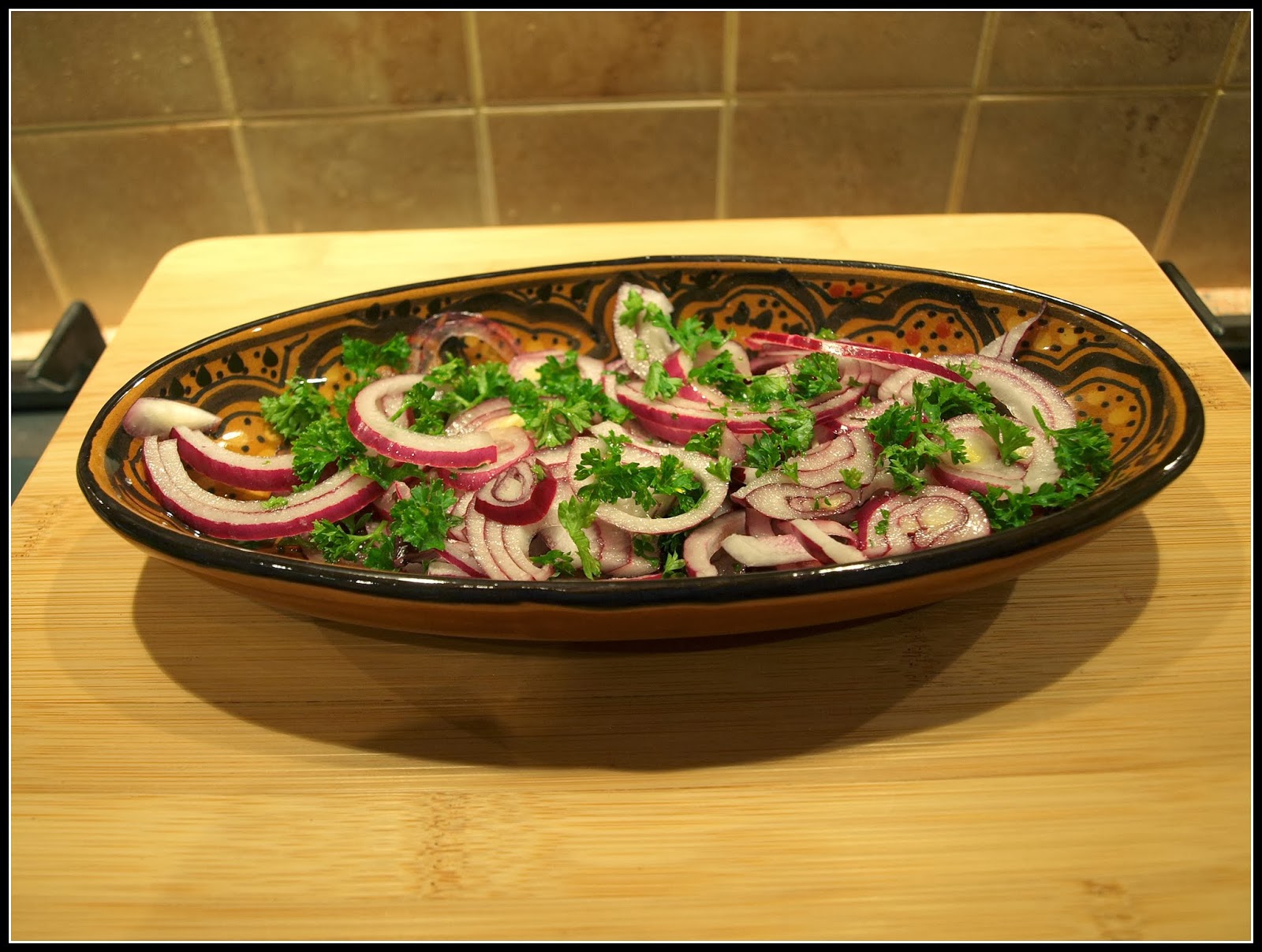 The other was red Gem Lettuce with (homegrown) Mesclun: 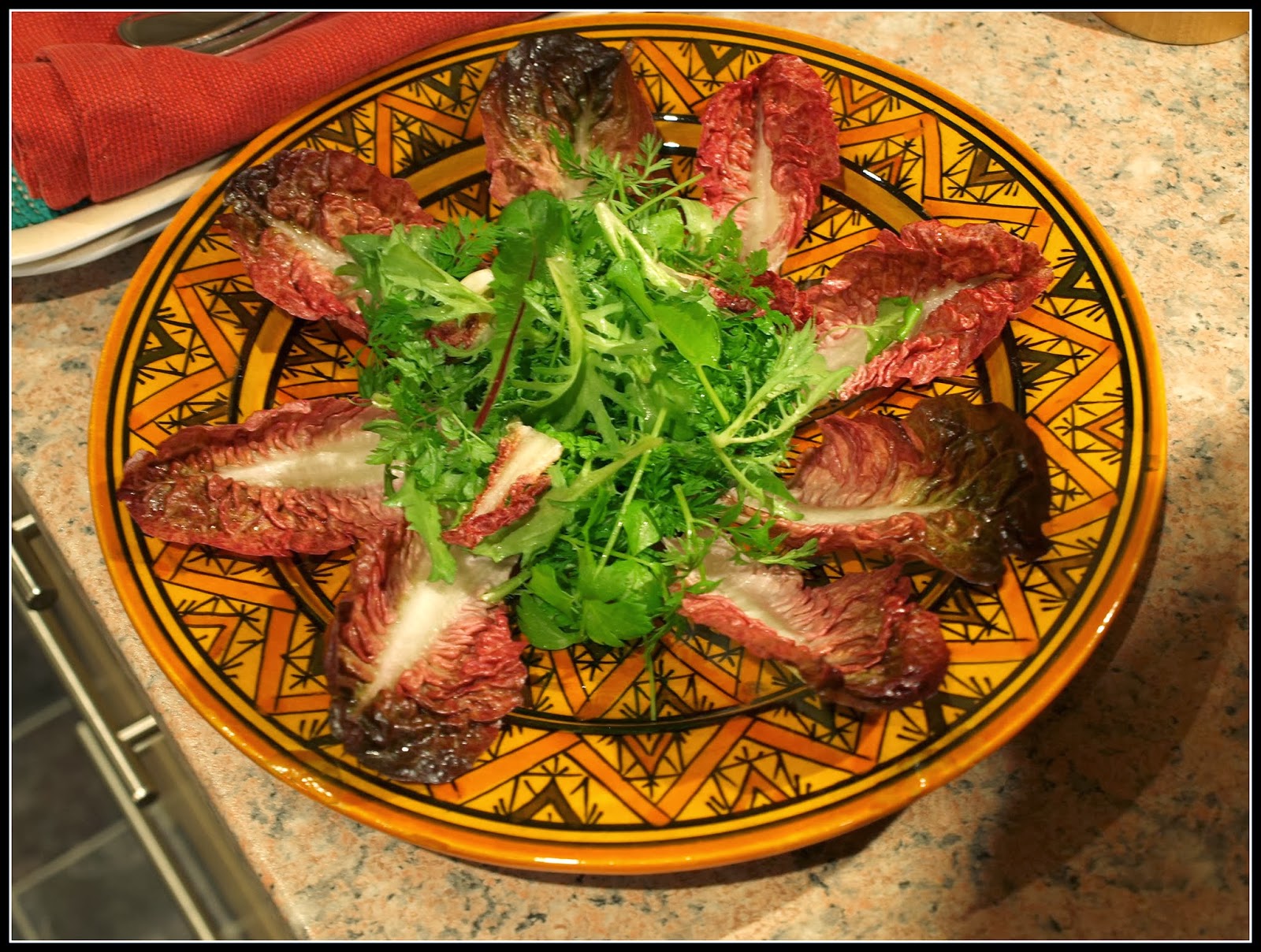 ﻿
That Mesclun grown in the Growlight House has been really worthwhile. We have had three 2-person servings from it already, and that is from only a half-sized seed-tray!

By the way, have you noticed that I used appropriate dishes for my salads? The one with the onions in it is made in Tunisia (though we bought it in San Francisco!), and the one with the red lettuce on comes (I think) from Algeria. Fiona and Juan bought it for us in their local market in France.

After two hours of slow simmering, this is what the tagine looked like (Notice that the level of liquid has not reduced much): 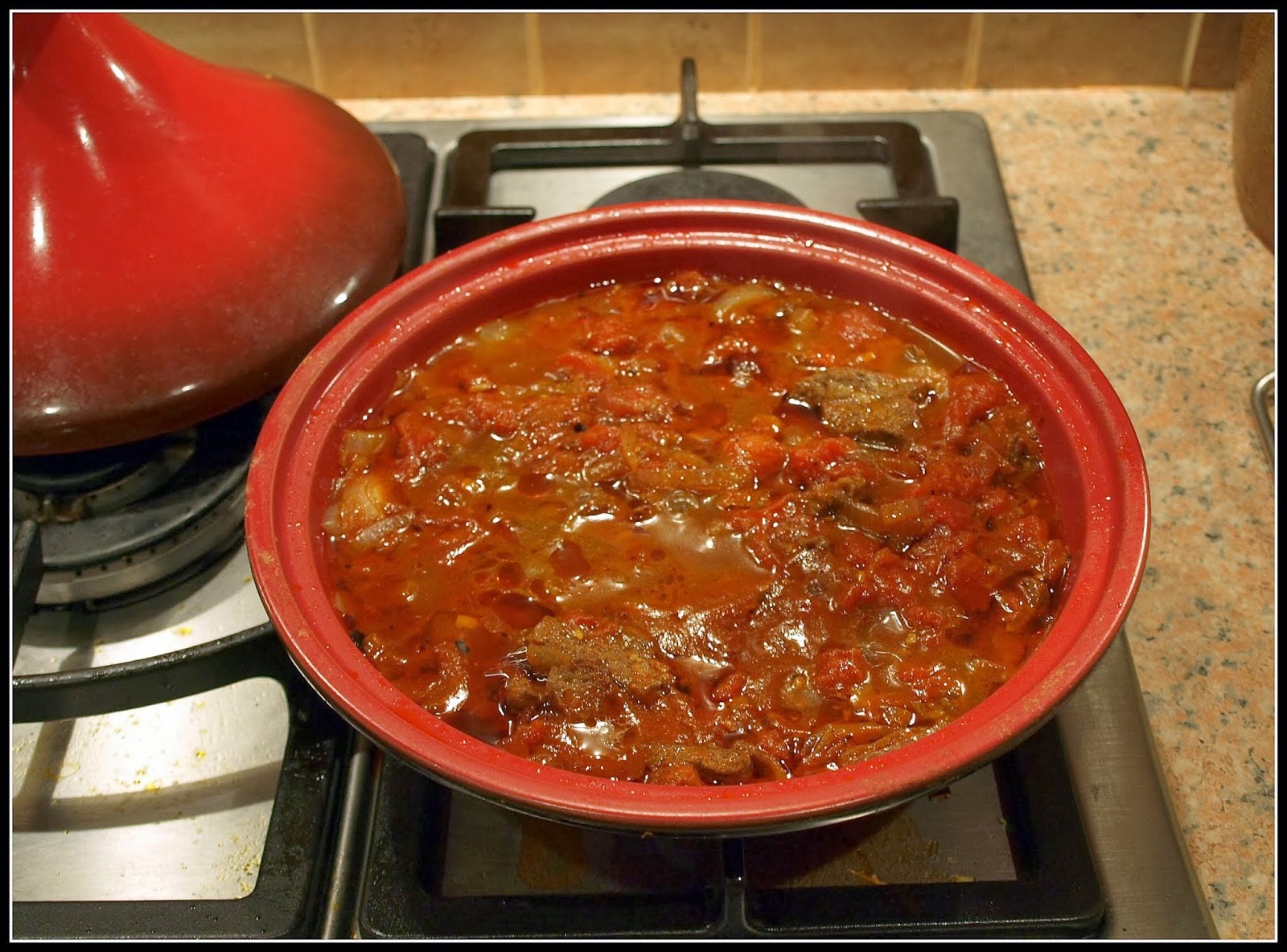 Lots of lovely tomatoey gravy, sweet and fragrant, but not spicy hot at all (maybe I should have put in some more Harissa?).

Here it is with the cous-cous to mop up that gravy... 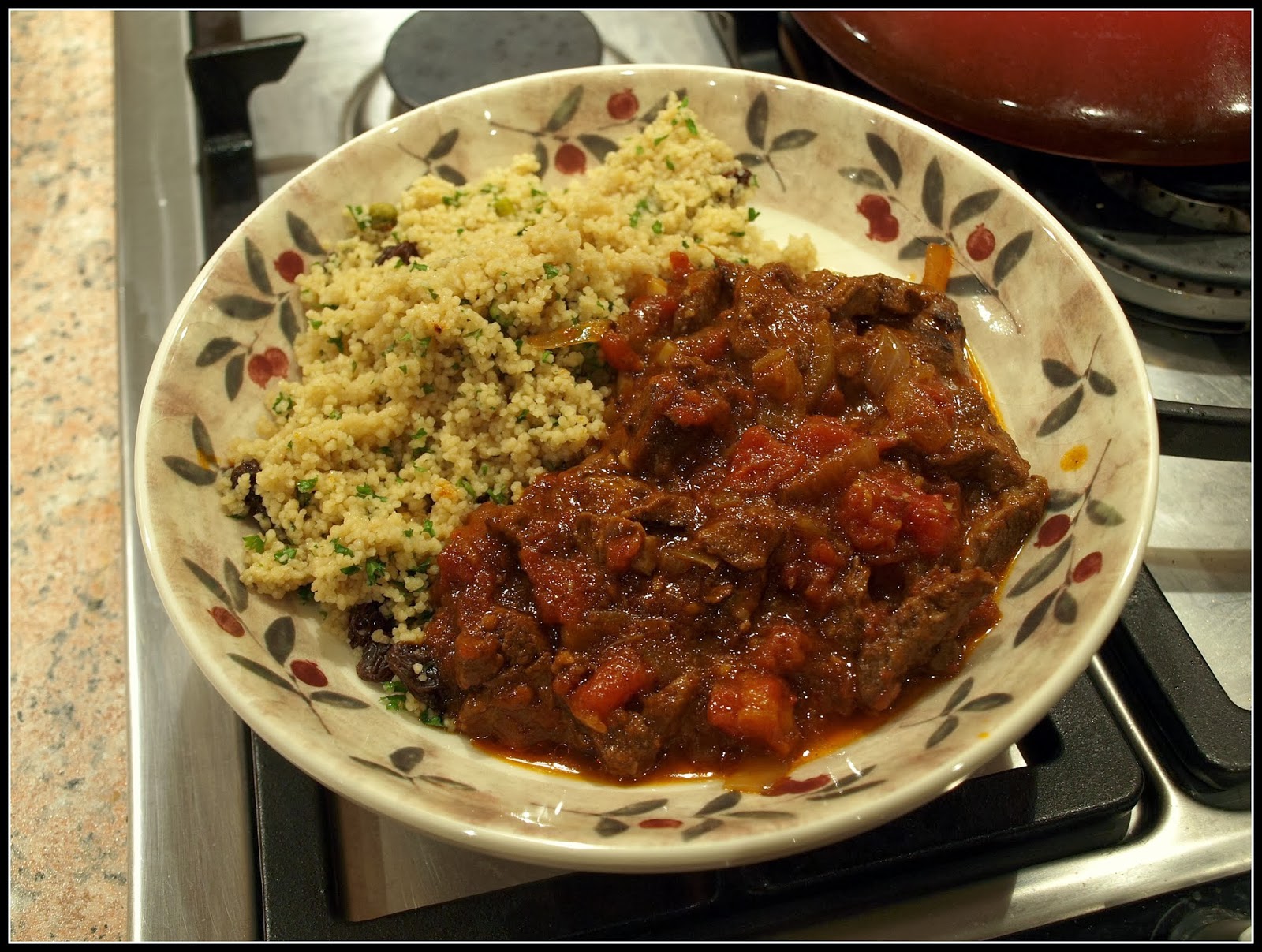 So that's one more culinary box ticked, so to speak.﻿

Actually, yesterday I did pick another Curly Endive and one "Sugar Loaf" Chicory, but I have written about these things so often recently, I thought you would be bored of them. 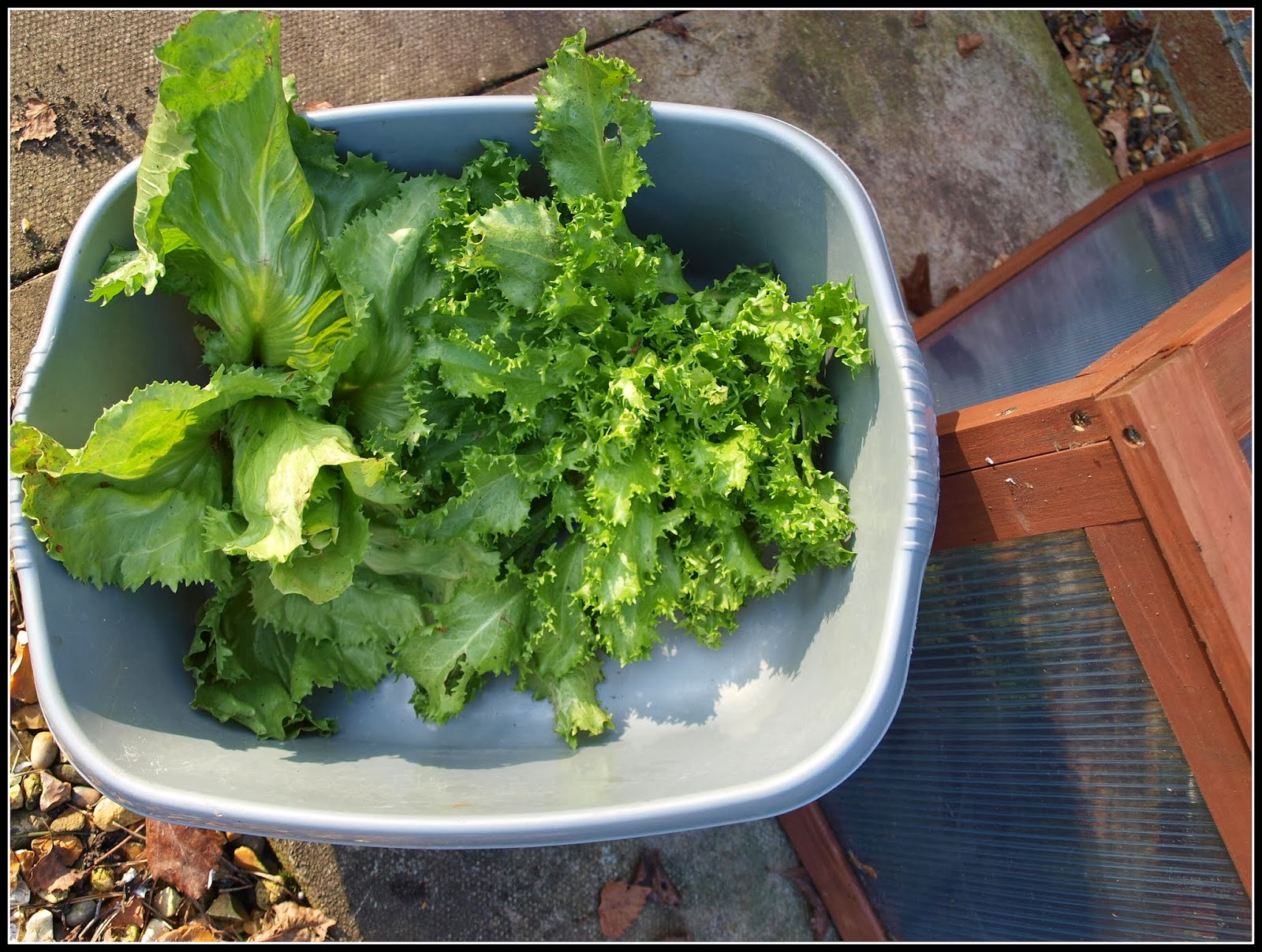