Feb One means Jan is gone!

Thank goodness January has finished - the wettest January since 1910. I wonder what February has in store for us... Its first day was not at all bad, and we had blue sky and sunshine for most of the day. Of course I only know that in retrospect. I was out in the garden with the camera shortly after sunrise in order to make the most of what I expected to be a very brief window of opportunity.

In the weak Winter sunshine the plot looked very stark, and the dominant theme seemed to be plastic. Plastic cloches in various forms - long ones, round ones, tall ones, tiny ones: 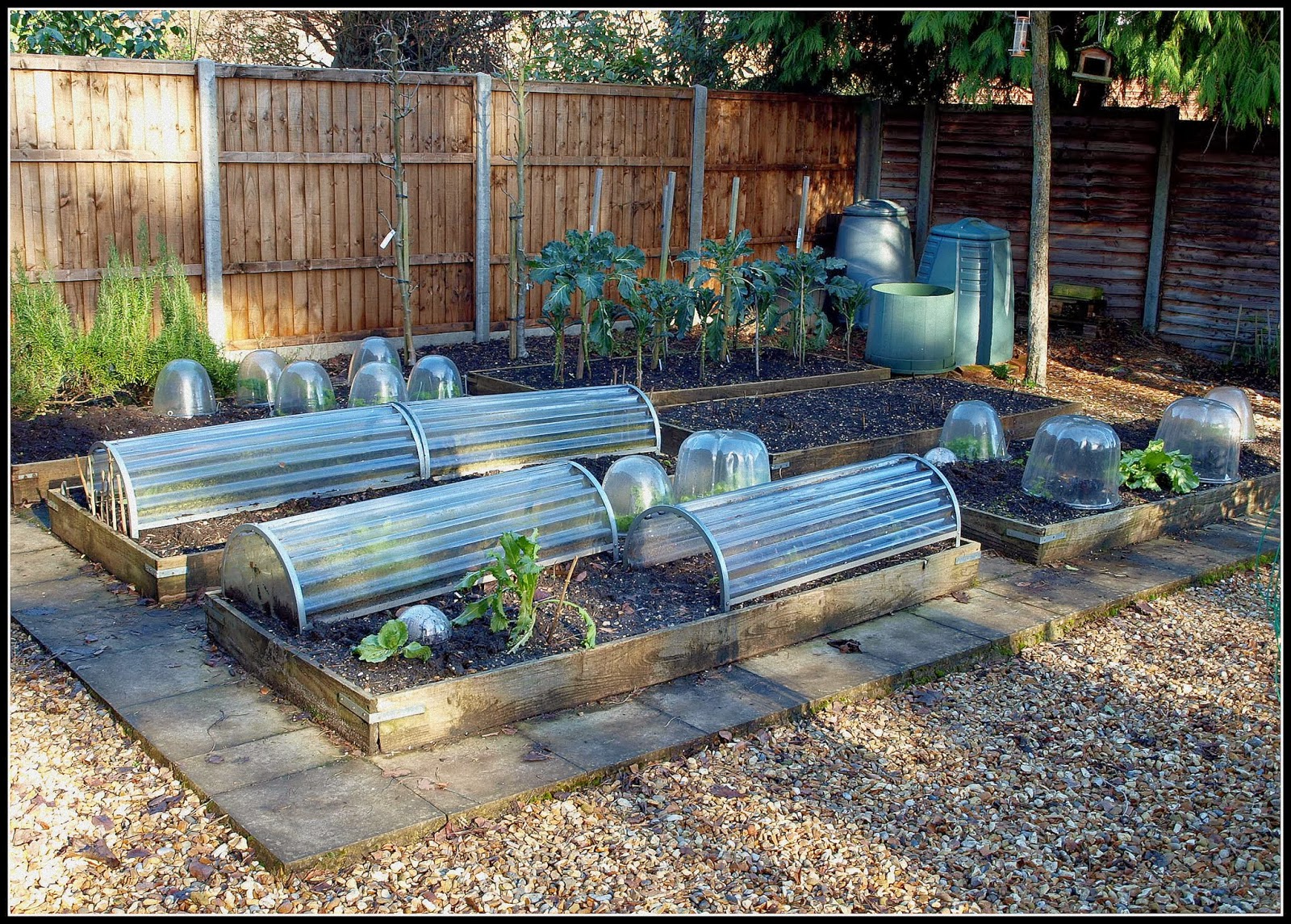 And plastic greenhouses, plastic compost bins, plastic tables. Where would we be without plastic??? 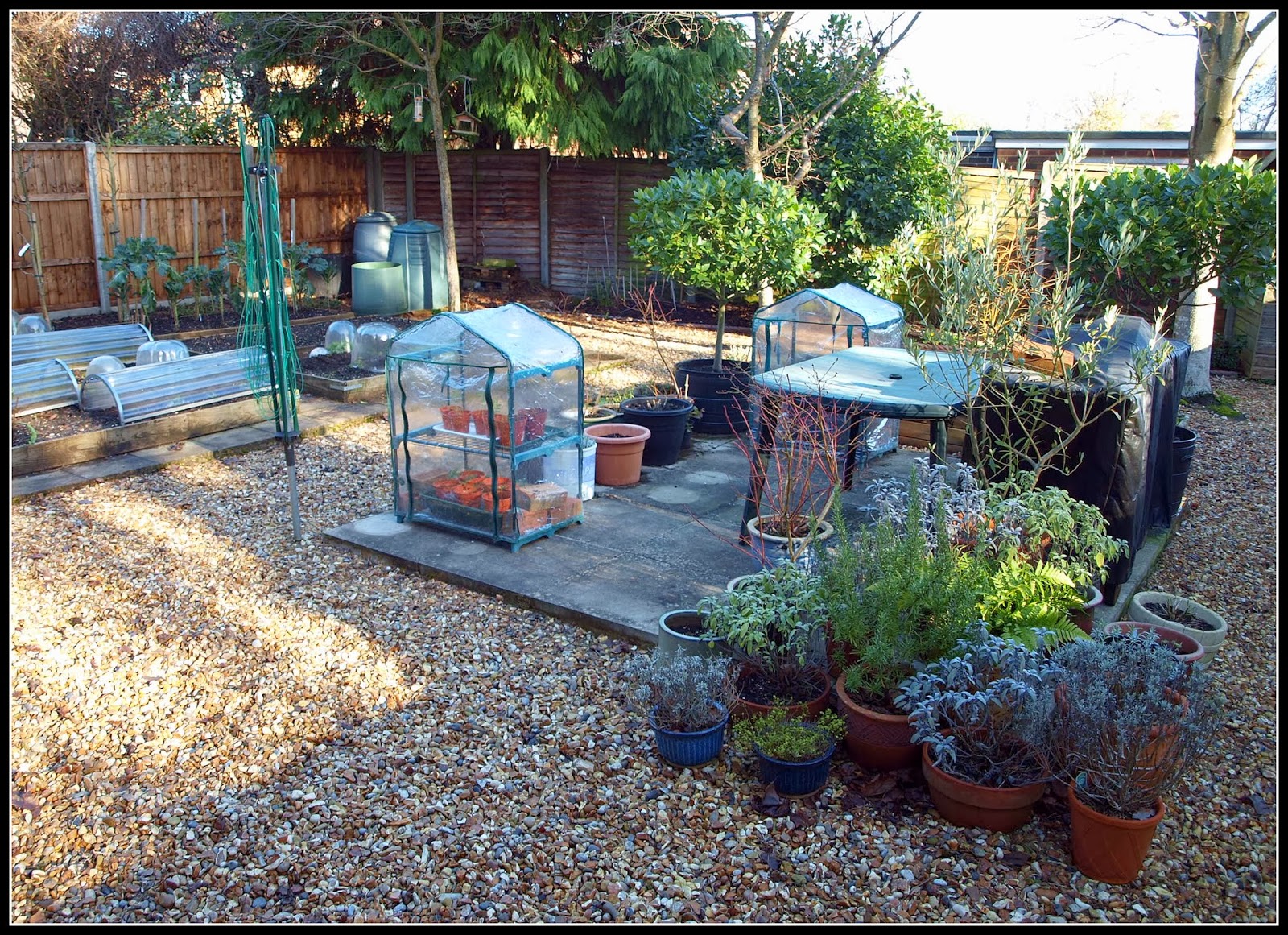 At least the shed is wooden, not plastic! Oh, and the raised beds... 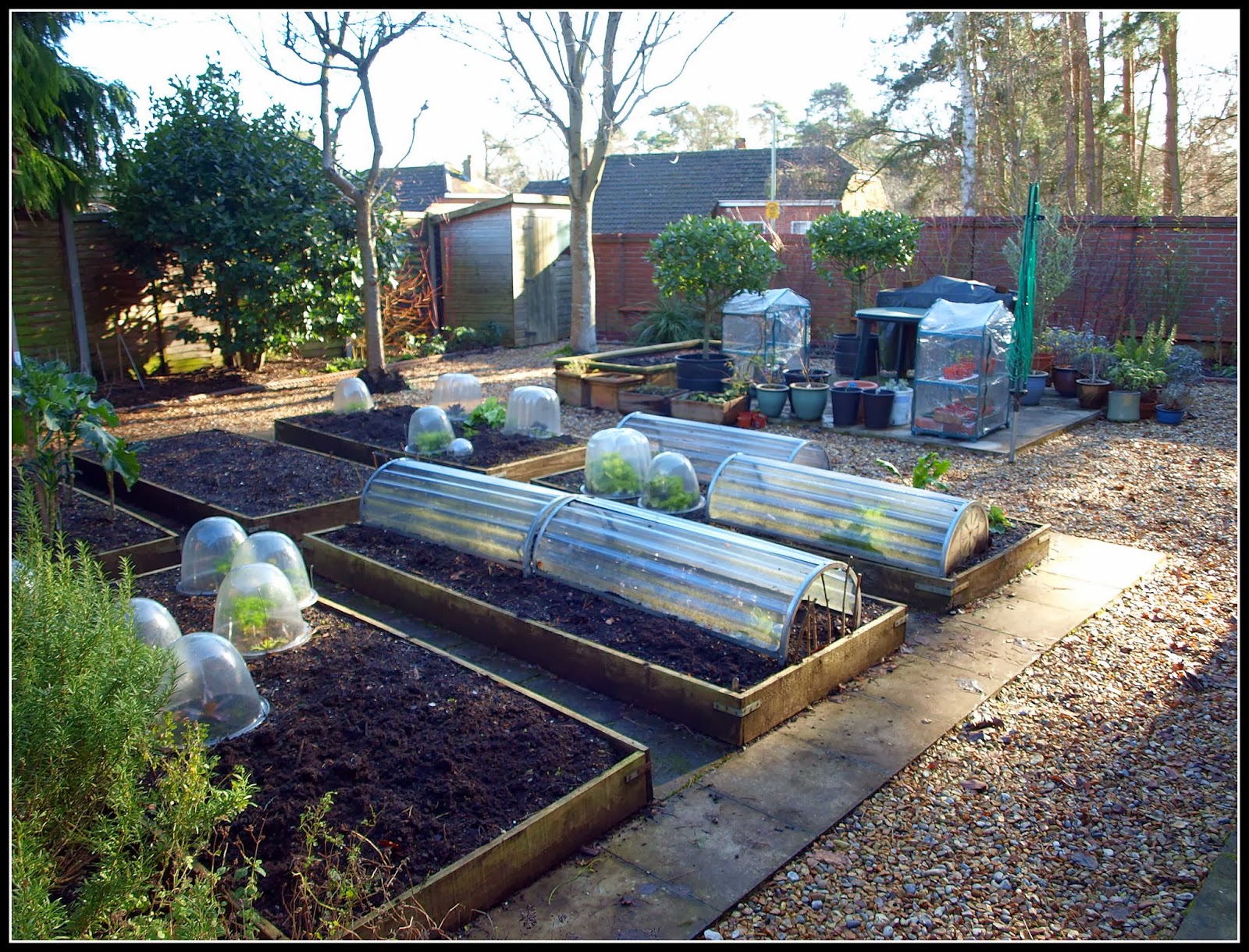 ﻿
The plastic is actually doing sterling service, protecting my plants from the wind and rain while giving them the benefit of what little light is available. This greenhouse is hosting Sweet Peas (top shelf) and Hellebores (bottom shelf). [Notice the SIX bricks weighting it down] 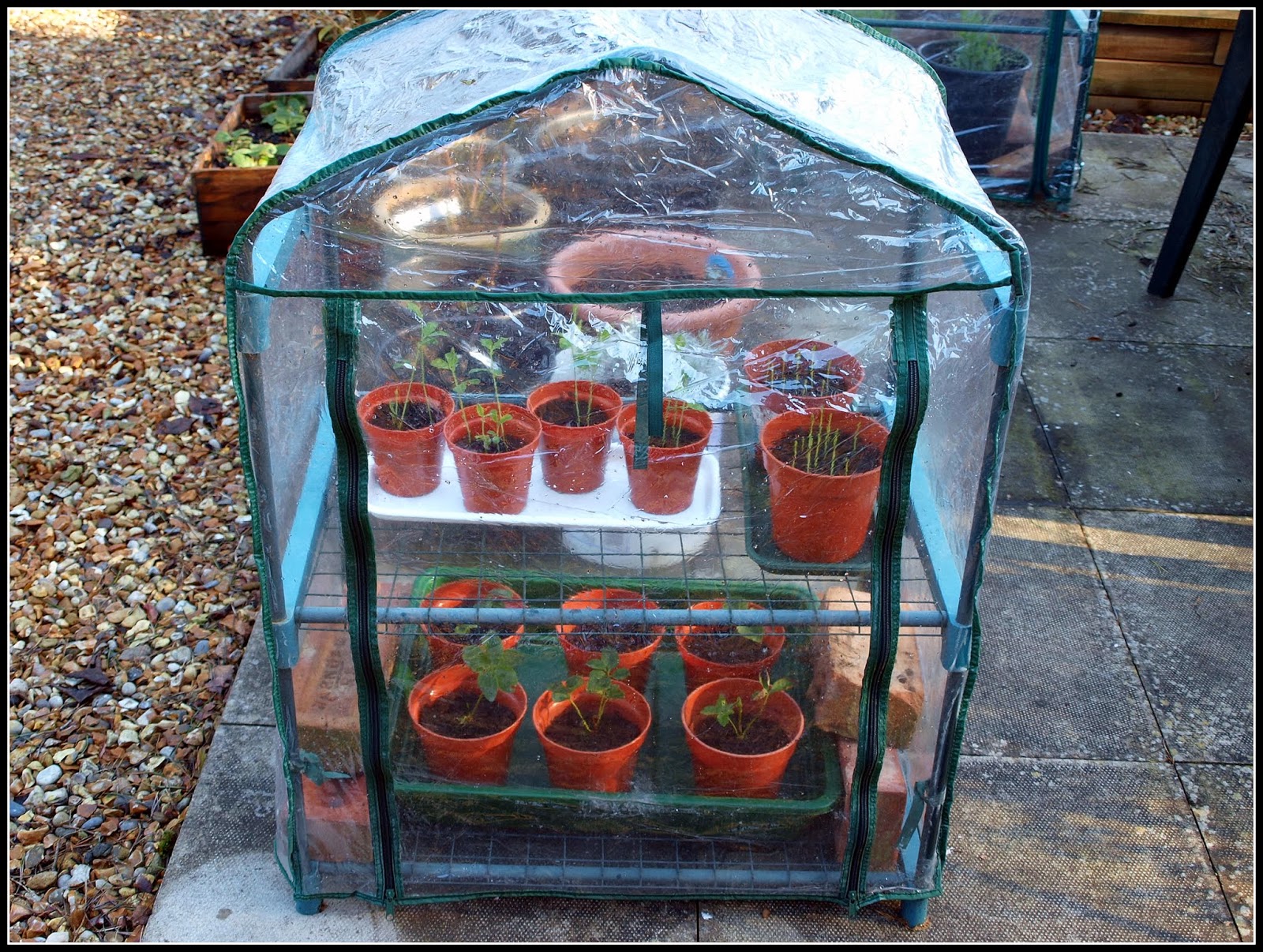 This one hosts the two pots of peas - the ones that had originally been sown for peashoot-production. The peas are getting quite big now. I think I will soon have to provide them with some support. 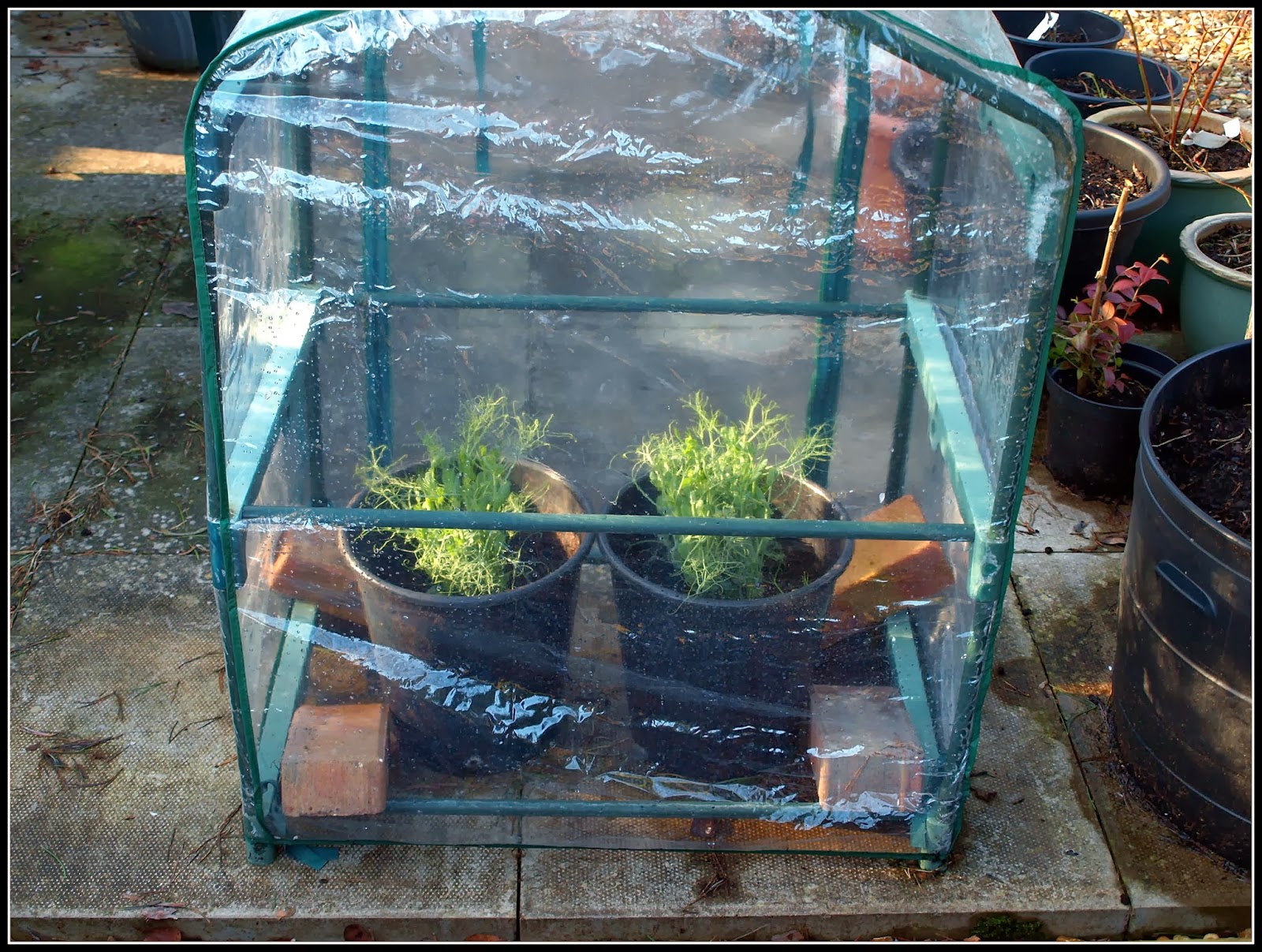 Here in one of the long cloches you can see some chicories. The flimsy end-pieces of these cloches have proved to be more trouble than they are worth, but I have put in some sticks to dissuade the local cats from using the cloches as sleeping-quarters. 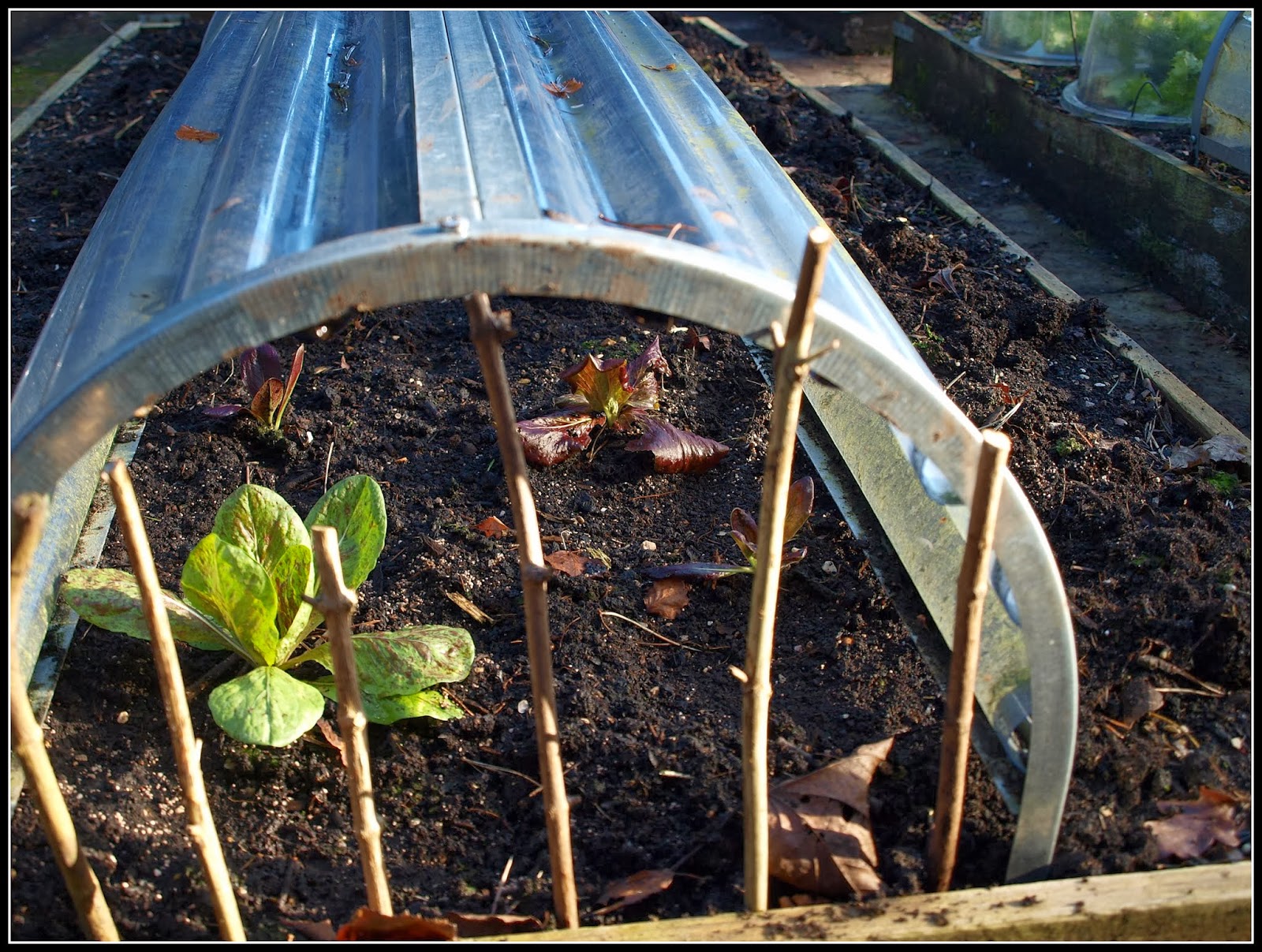 The Parsley is positively revelling in the relative warmth of the little bell cloches. It's really luxuriant at present. Much better Parsley than I usually have in January. I must do this again next year! 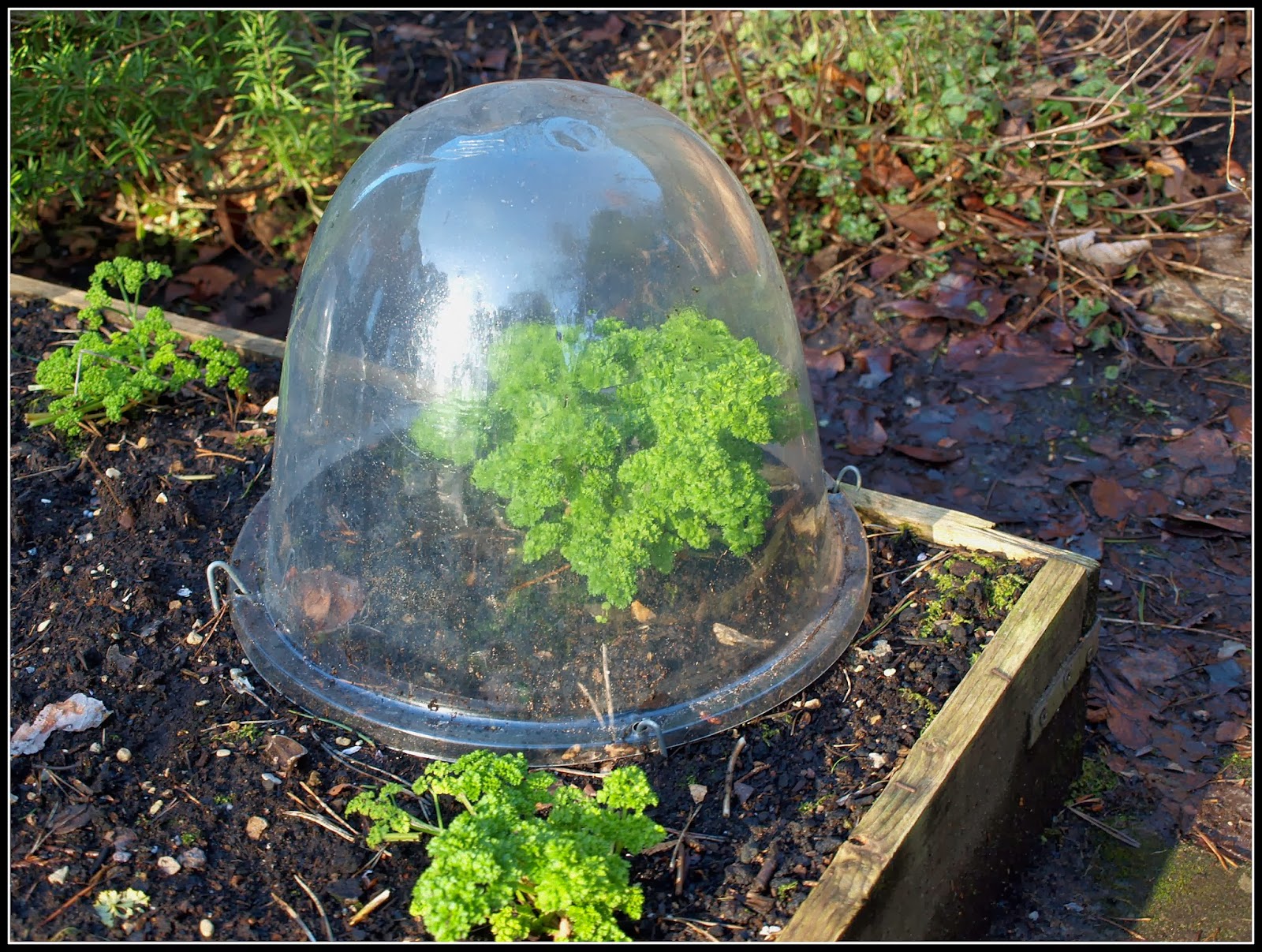 ﻿
Notice how much smaller are the plants without the protection of a cloche.

Arrayed in profusion on and around the paved area are pots of various sorts. Some of them hold dormant herbaceous perennial flowers (Echinacea, Gaillardia, Rudbeckia), and some of them hold Blueberries, while in the wooden boxes are some Strawberry plants. 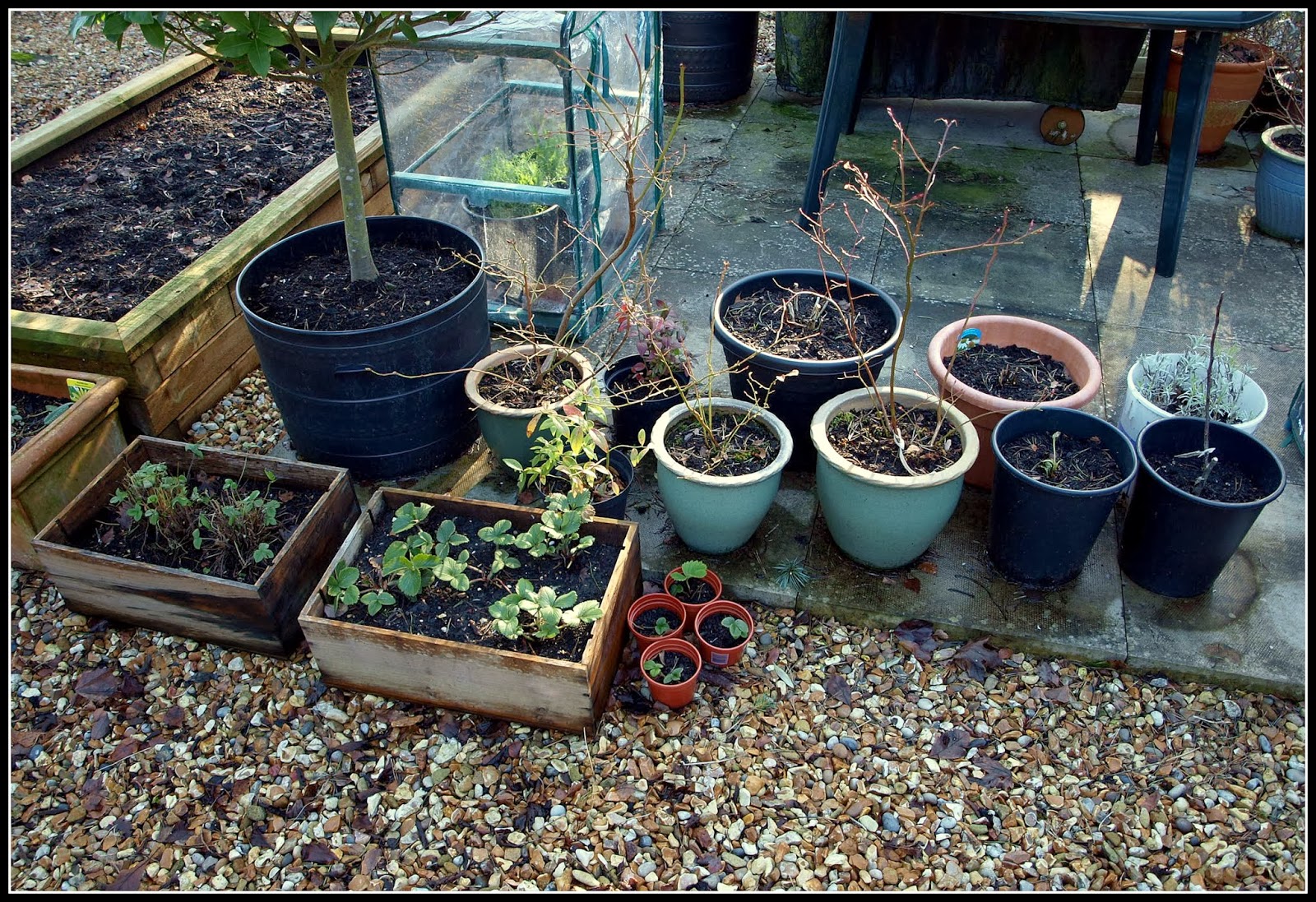 ﻿
I have decided to get rid of the wooden wine-crates that the Strawberries are in. They are already two years old and are rotting rapidly. Guess what? I'll replace them with more plastic! This week I bought a couple of 22-litre black plastic storage crates, at £2.50 each from Tesco, which will do the job nicely once I have drilled some drainage holes in them.

Now, at the beginning of February, the garden doesn't look very appealing, but I'm beginning to think about sowing and planting. Very few seed-packets bear the words "Sow from January onwards", but there are a few that say "Sow from February onwards"! We just need a few more dry sunny days like yesterday.
Posted by Mark Willis at 12:00