I haven't had much chance to get out in the garden this past week. For a start, the weather has been appalling most of the time, and apart from that I have been travelling quite a long way to and from my place of work, so I haven't been home in daylight much of the time. So, today I'm posting about cookery instead of gardening.

Earlier in the week, Jane had to go into hospital for a medical procedure and I took her to and fro, so I needed to produce a meal that would be not only hearty and comforting for "the patient", but also easy to make, without lots of rushing around the kitchen at the last minute. I decided to make a Cottage Pie. 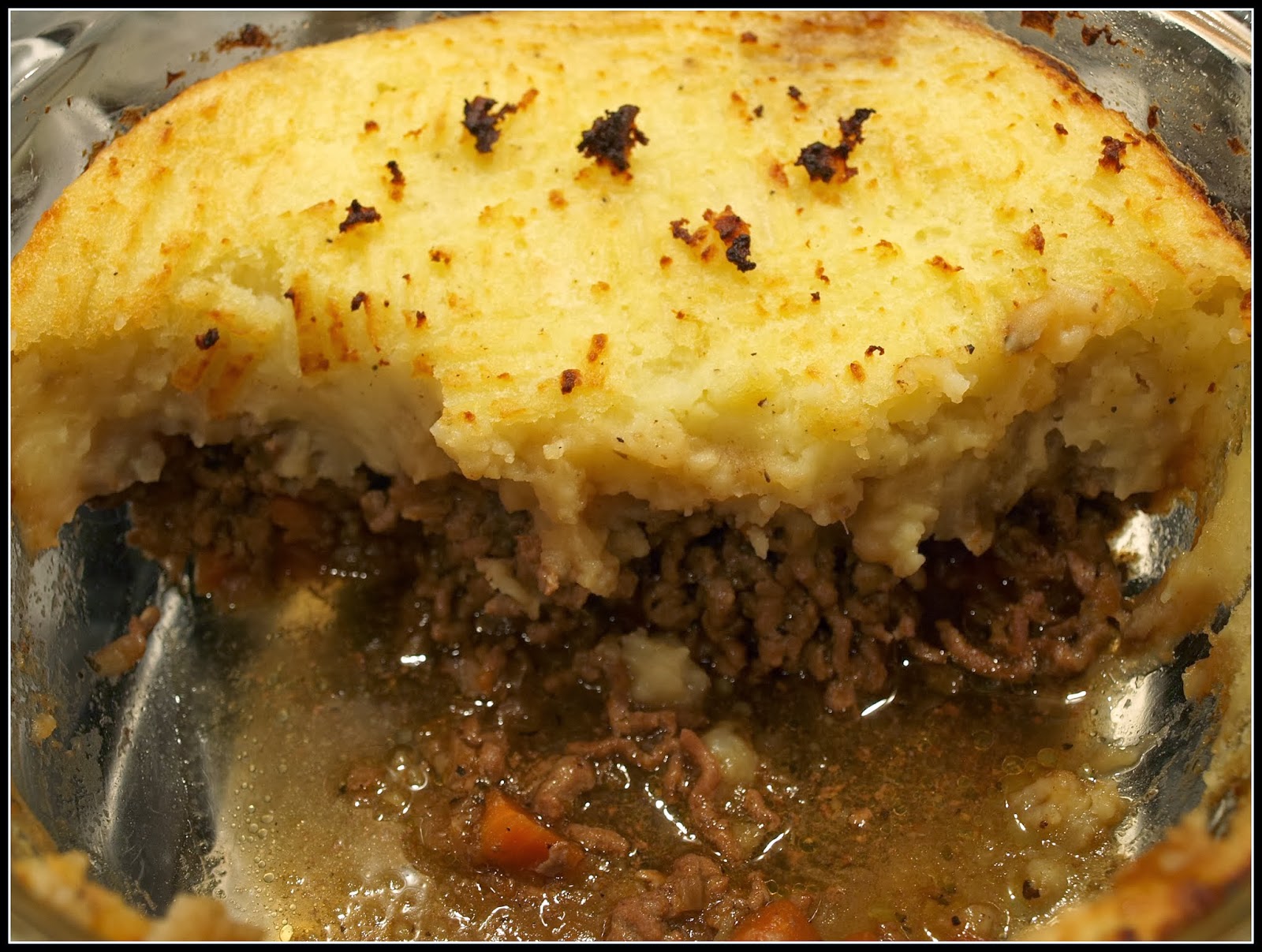 I'm sure many of my UK readers will be familiar with this dish, but I suspect that those from other parts of the world may not. You certainly wouldn't guess what it is from its name! It is actually a dish of minced beef topped with mashed potato. Not really a pie, and it definitely doesn't contain any cottages.

You start by making the minced beef into a sort of "ragu". I browned the beef first, then set it aside temporarily while I softened a finely-chopped onion and two similarly chopped carrots in the juices left behind by the meat (I had to add a little vegetable oil too). To flavour the meat I added about a dessertspoonful of dried Oregano, three cloves of crushed garlic, a sprinkling of chilli flakes, and a few grinds of black pepper. (Of course you can omit the chilli, which is not traditional. I just find that it gives a dish a little added warmth and savouriness. Likewise, Thyme would probably be more traditional than Oregano). I added-in a crushed beef stock cube and about 500ml of water. The dish is then covered and goes into the oven at about 150C for 2 or 3 hours - however long you have got, really. Long slow cooking will make the meat more tender. Quickly-cooked minced beef can be rather "gritty". Just check it occasionally to make sure it hasn't dried out, and add more water if necessary.

Meanwhile, boil some potatoes and mash them with a little milk and butter. Make more mash than you think you will need! When the mash is done, set it aside to cool.

Later, when you think the beef has had enough cooking, remove it from the oven and let it cool too.

Then, when both elements of the dish are cool, decant the meat into an ovenproof dish and spread it out evenly and then put the potato mash on top. Flatten it down, but roughen-up the surface with a fork. This will help it to brown later on. Finally, dot the surface with little knobs of butter. At this point you can stick the dish in the fridge for later, if you wish. You can even freeze it. If for any reason we need to eat at different times, we put the ingredients into two small dishes rather than one big one and put them in the freezer so that a one-person serving is available for each of us whenever required, and basically just needs warming-up.

At the appropriate moment, put the dish in the oven on a fairly low heat for about half an hour to warm through, then whack the heat up high for another 15 minutes or so to brown the potato topping. 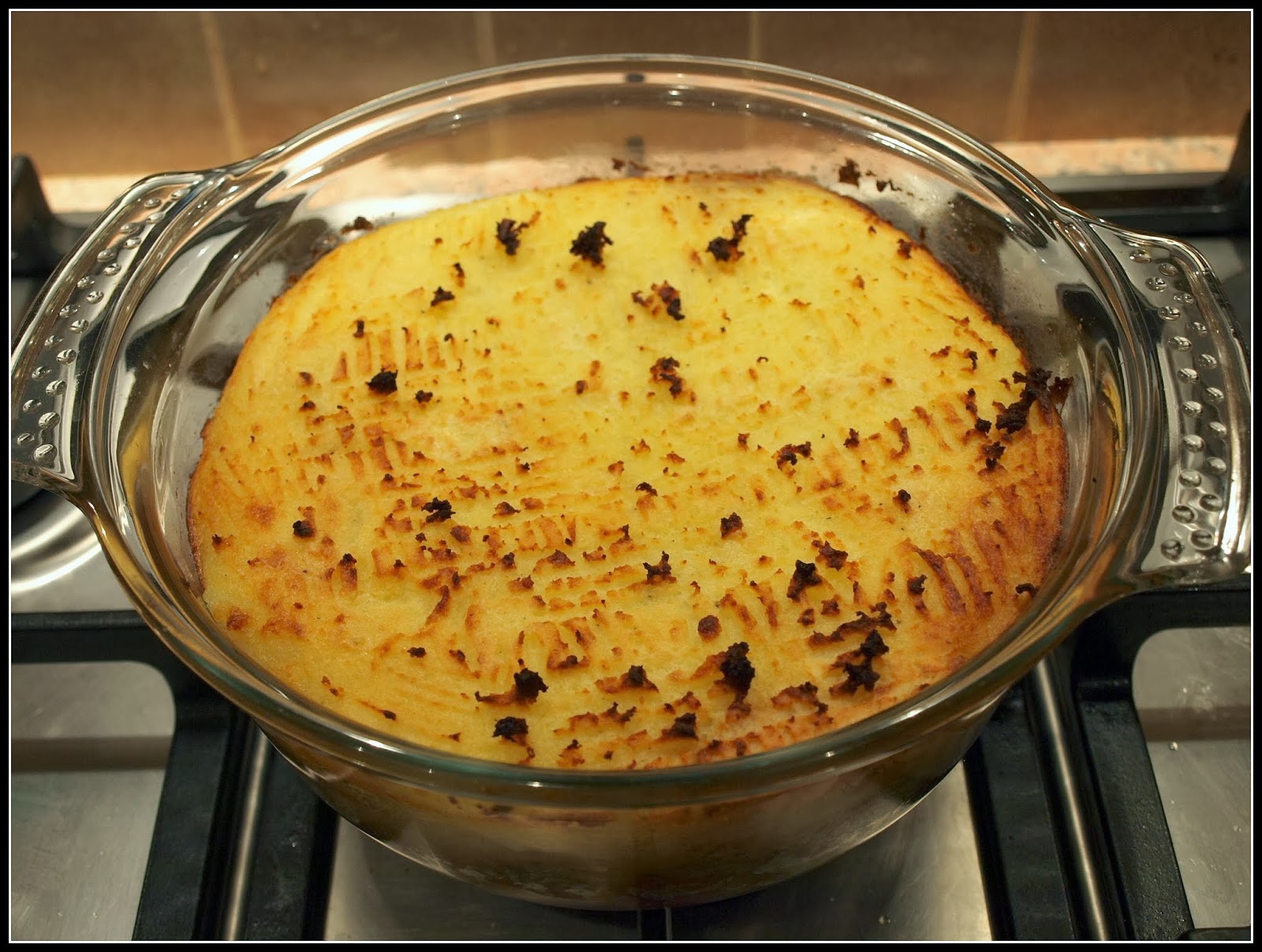 I have to admit that I have only made this dish twice. The first time I felt that the meat element was too dry, so this time I added more liquid. It does need a bit of gravy, but I think I may have erred too much in the opposite direction this time. Next time it will be just right! 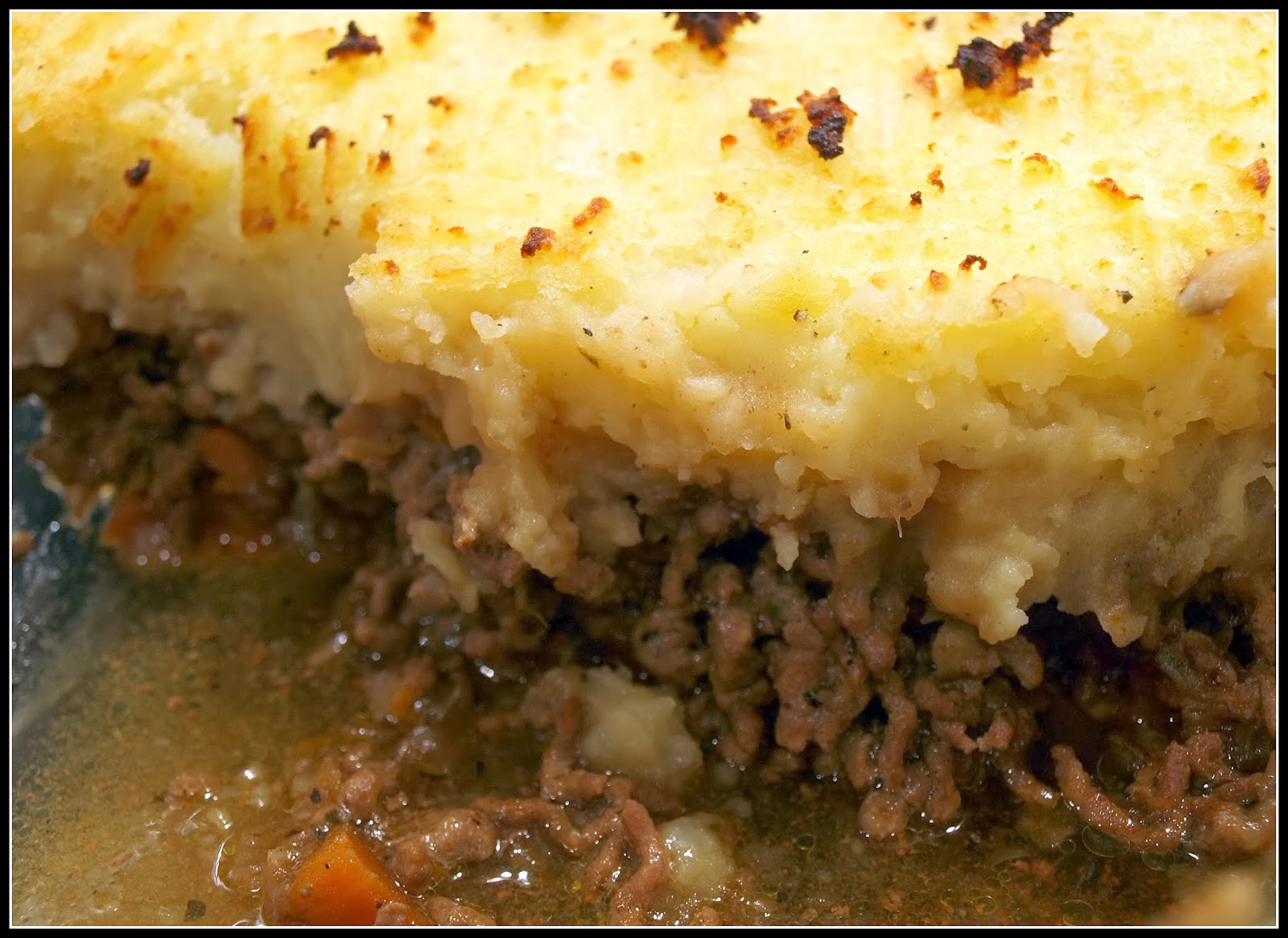 Cottage Pie is best served with a green vegetable, such as Cabbage, Brussels Sprouts or Broccoli. As suggested by my daughter Emma the other day, the topping would be even better made from a mixture of Potatoes and Parsnips.

A very comforting dish, yet easy to produce and very undemanding in terms of culinary skill. Fit for purpose!