In a way, tomatoes are a bit like potatoes (I mean, apart from botanically): the little tiny cherry types of tomato are the equivalent of the First Early potatoes, and mature relatively quickly, whilst the big so-called Beefsteak varieties are the tomato equivalent of the Maincrop potato, typically maturing much later.

Most of my cherry toms have been picked now, though of course there will be some late-arriving stragglers. Here's a typical view of the Dining Room table at present. Notice the dehydrator doing its thing in the background. 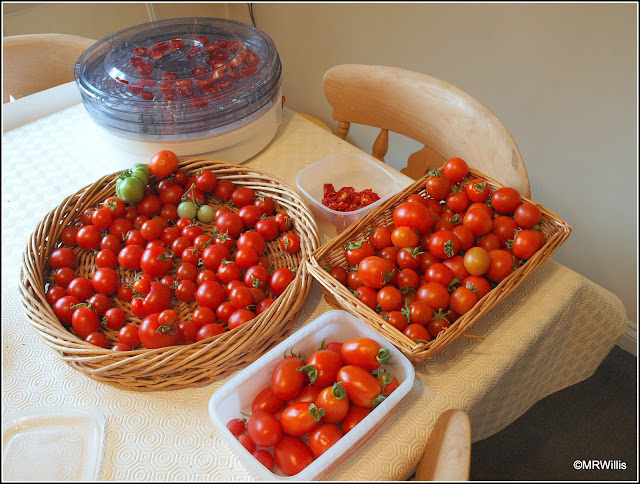 The bigger varieties of tomato are often trickier to grow - for instance they usually benefit from pinching-out of sideshoots (in the USA this is habitually referred to as pruning). I always grow mine as upright single cordons, with support from tall bamboo canes.

Most of my plants have a good amount of fruit on them this year, with one notable exception, whose seeds I got from a friend in the Netherlands. I think her tomato-identification (and labelling) skills are probably not of the highest order and these ones were simply labelled "Coeur de boeuf" - "Oxheart", what we in the UK call "Beefsteak" and probably just a generic type-name rather than the name of a specific variety. The plant has produced only 4 or 5 fruit so far, whereas the others have many more than that. Unless it has a late rally, or the fruits turn out to be especially tasty, I don't think I'll grow this one again. 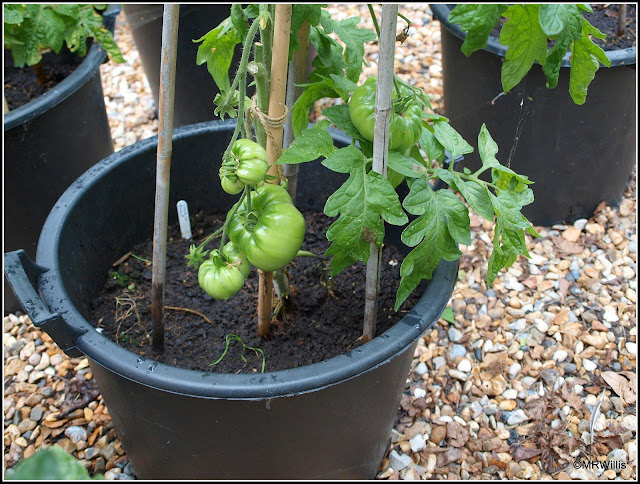 This is "Cherokee Purple", a variety I have grown several times before. It's a very vigorous variety and produces lots of huge fruits. 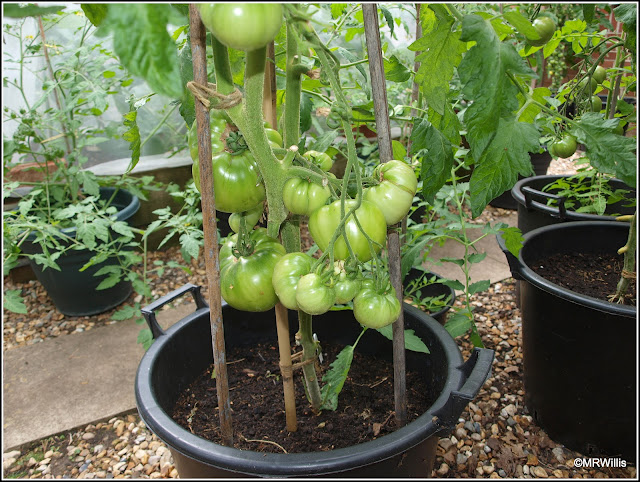 This is "Marmonde" (NB: Not "Marmande", that's a different one). 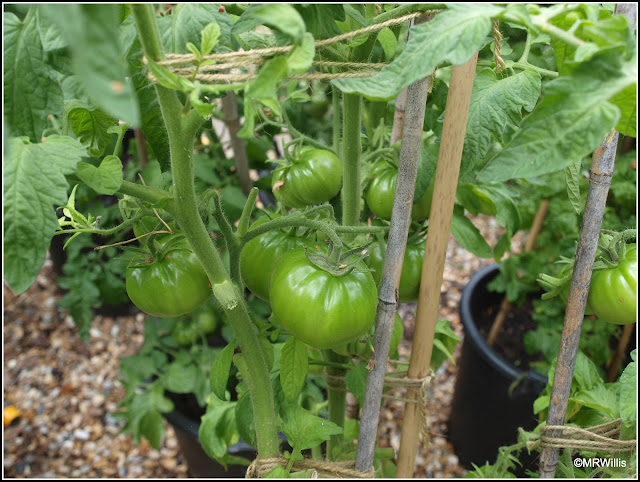 This is another from my friend in Holland. The seeds for this one were labelled "Black and Green mini", but I suspect they will ripen to red! The shape is very much like the variety I know as "Italian Red Pear". 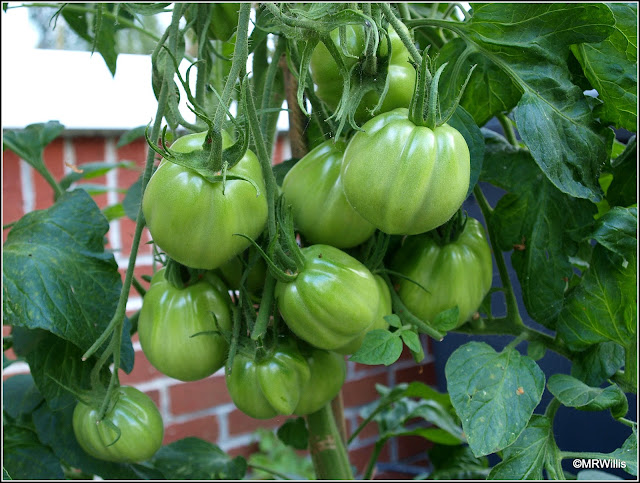 This is "Noire Charbonneuse", who seeds were originally from a different friend - this one in Belgium. It's a very gnarly variety, very prone to "cat-facing": 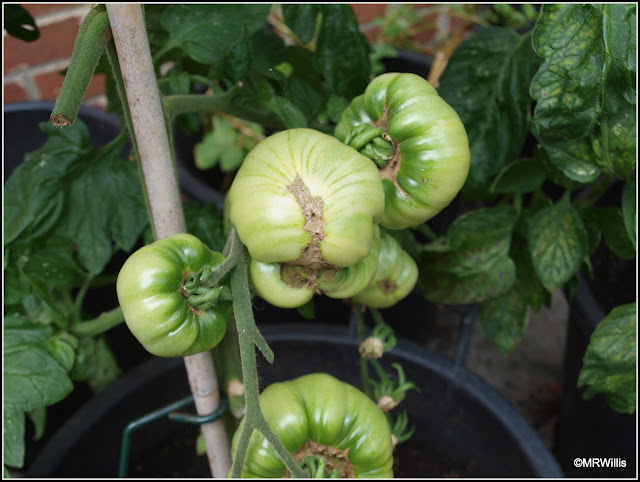 This is the very old-fashioned but well-respected "Moneymaker". I think it is the one that my Dad used to grow most often, back in the 1960s and 70s. He had a greenhouse too, unlike me. 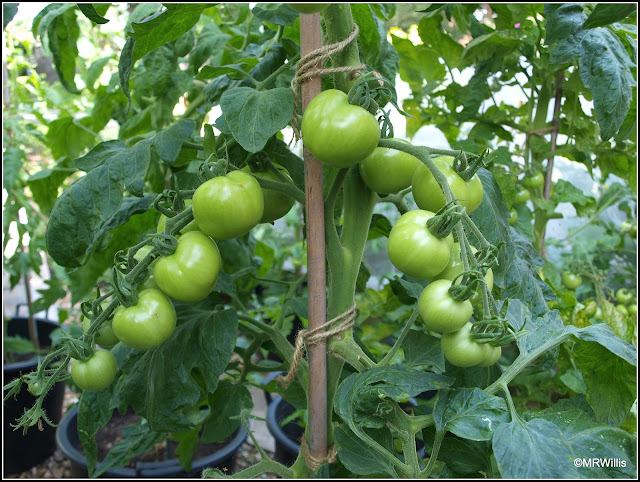 This is "Super Marmande", an improved version of that famous variety so evocative of markets in the South of France. 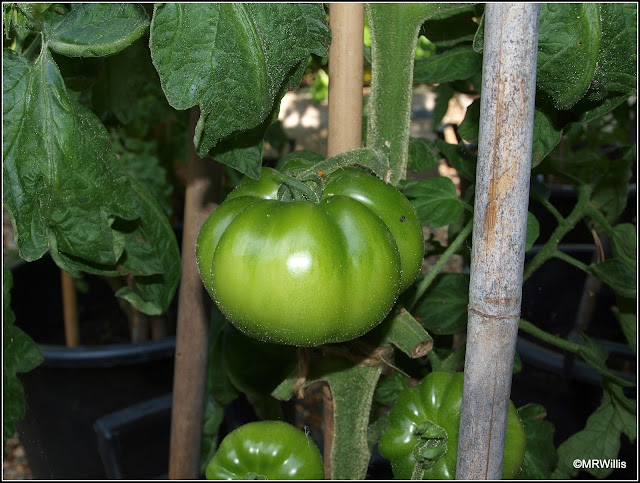 Furthest behind of all are my two Dwarf varieties. This one is "Dwarf Beauty King", which has some flowers, but no fruit yet. The one I grew last year did well, eventually, so I hope this one has not "missed the boat". 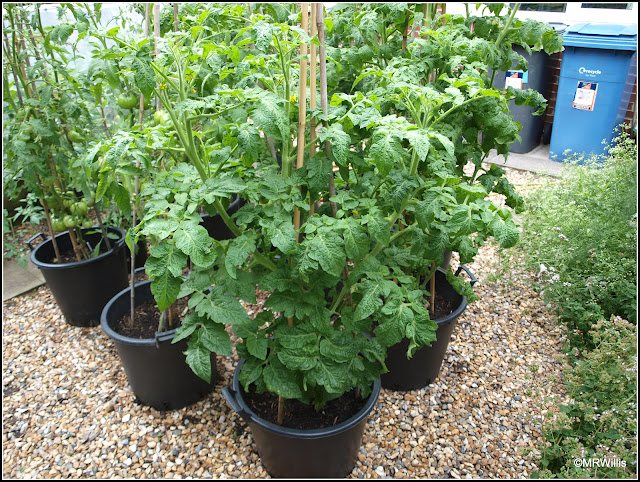 As you can see, the fruits on most of my tomatoes are still green, but a couple of the smaller-fruited varieties are just showing the first signs of colour-change, such as this "Gardener's Delight": 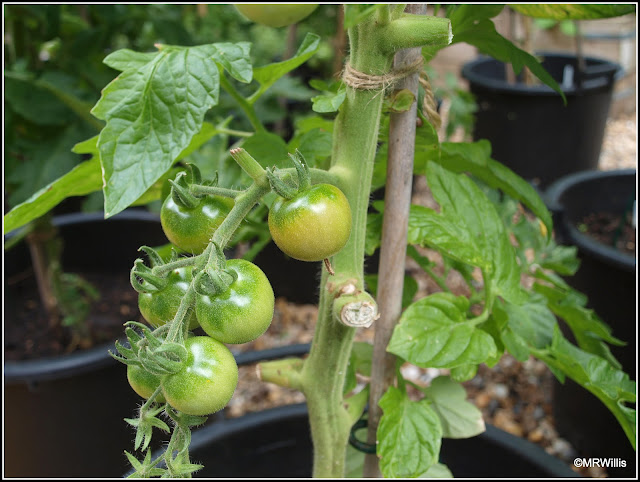 And there's no mistaking the yellow colour appearing on these "Golden Sunrise", is there? 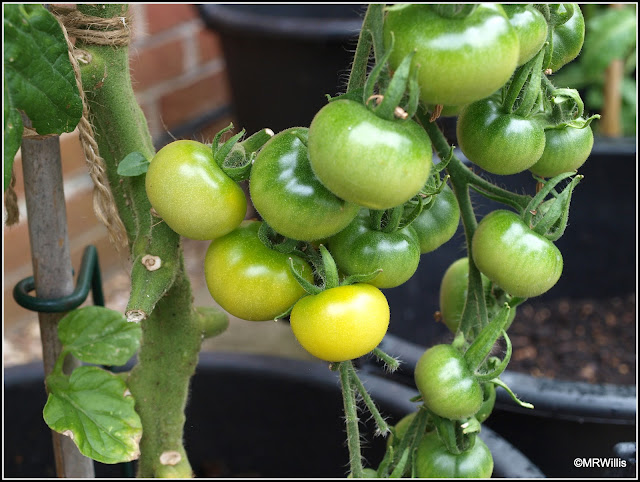 Finally for today I want to show you this lovely plant of "Ferline". I only planted it as an afterthought really. I had run out of the big 35L black plastic tubs in which I grow most of my tomatoes, but I found this old pelleted chicken manure container in the garage and used it to squeeze in just one more plant. I'm glad I did! 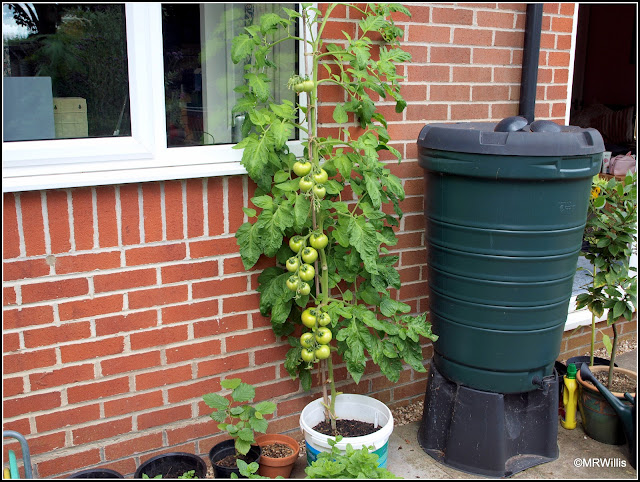 The so-called Indeterminate varieties of tomato are basically vines and will try to grow as long / tall as they can. This one is just setting its 5th truss so I have pinched out the growing tip to stop it growing any taller. This will force it to concentrate on ripening the fruit it already has - which is quite a lot. "Ferline" is another one that I grow almost every year. One of its qualities that I like is that it is very disease-resistant. Though it is not really blight-resistant like some more modern varieties are, it is one that will hold out against blight for longer than most.
Posted by Mark Willis at 12:30