It's late August already, but my veg-plot is in full harvest mode. 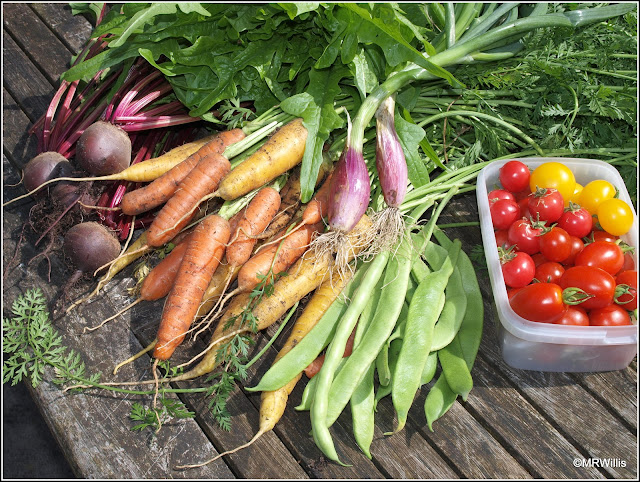 I keep thinking the cherry tomatoes must be coming to an end, but they are still ripening in droves. 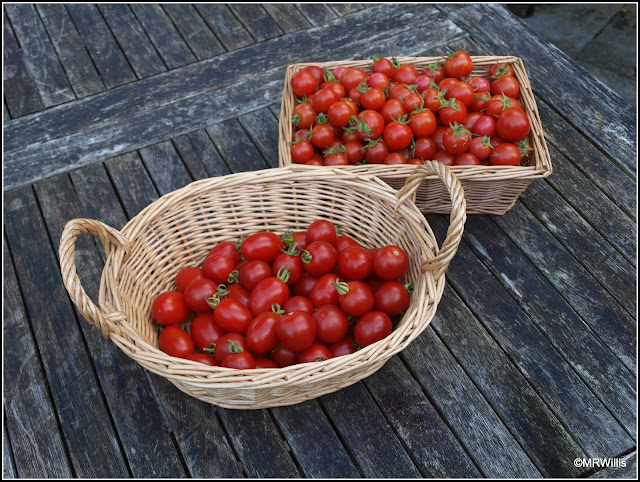 I wrote a couple of weeks ago that we seldom cook with the cherry tomatoes, and generally eat them raw, but this year we have had so many that I have made some of them into sauce and frozen it for Winter use. I have 8 cherry tomato plants and between them I think they must have produced well over 5kgs of fruit.

We have had a few spells of rain recently, which has prompted me to pick some of the tomatoes just a bit under-ripe, because sudden over-abundance of water after a dry spell can cause the fruit to split. The deep red tomatoes in the oval basket (here mostly the plum-shaped "Montello") have been ripening indoors for a few days, whereas the other ones in the rectangular basket are recently-picked and a much lighter shade of red. 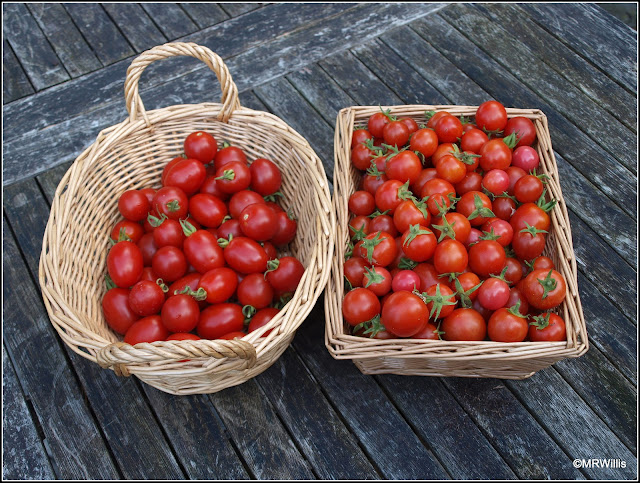 Now the first of the bigger tomatoes are just about ripe. This is "Cherokee Purple", which has produced a couple of really huge fruits as well as a good number of more normal-sized ones. 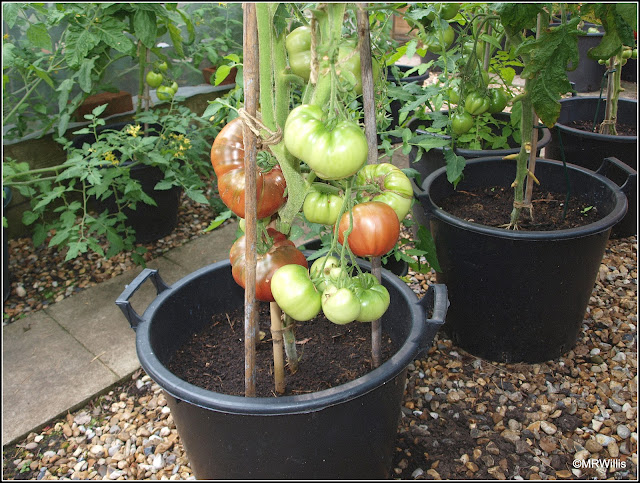 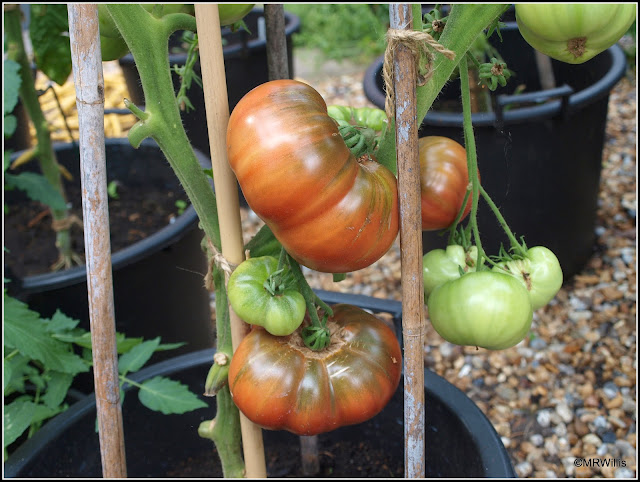 The so-called "Black and Green mini" have as I suspected, started to turn red! 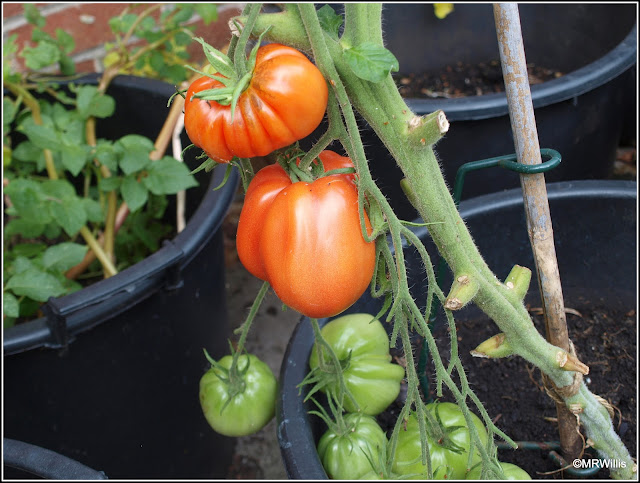 The most regularly-shaped tomatoes I have are these fine specimens of "Ferline". 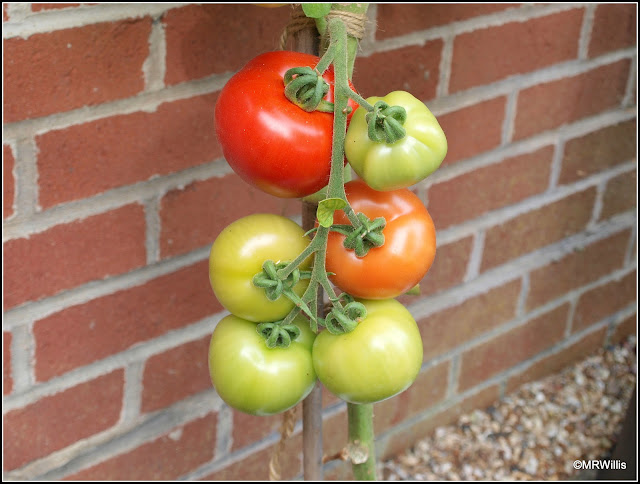 This is the parent plant, which is just setting its 5th truss of fruit. 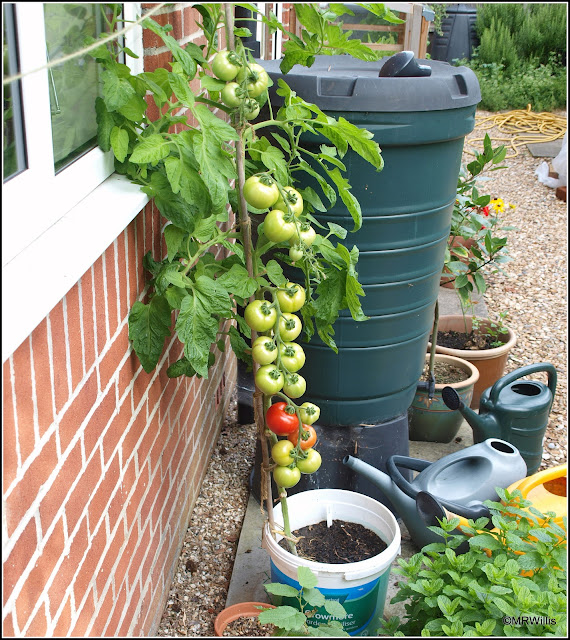 The recent rain has given the Runner beans a new lease of life too. During the dry spell in July most of the pods they produced were small, quite tough and mostly very curved. The most recently picked pods are long, straight and succulent. 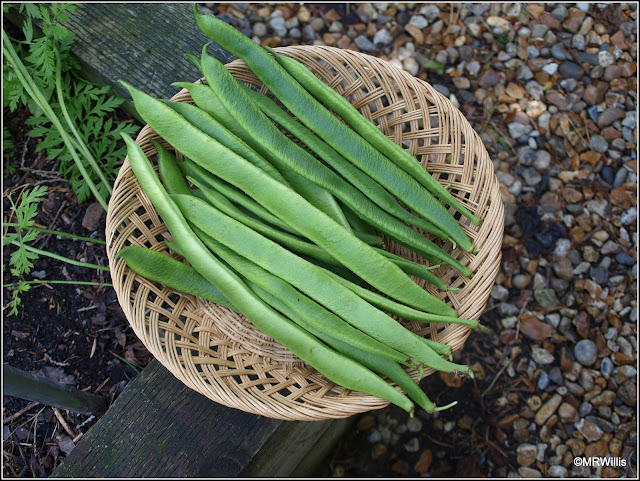 We have a lot of beans in the fridge now, waiting to be used. In fact today I went through them all and threw away all the "sub-optimal" ones. "Heresy!"  I hear you say, but honestly there's no point in eating the poor ones when I have such a lot of really nice ones! I know from experience that the best Runner beans are often the ones produced late in the season, when it's cooler and wetter. Looking closely at my bean plants today I can see that there are a lot more pods on the way. 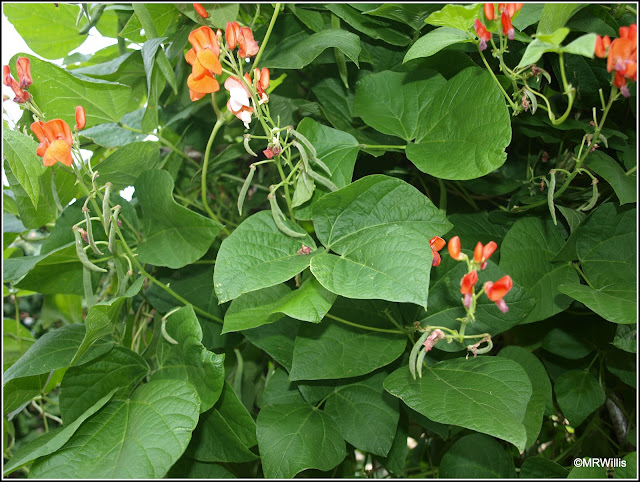 I also make a habit of pulling off any pods that don't develop properly, or show signs of swelling seeds before the pods are a decent size. This prompts the plants to produce even more pods.

My cucumbers are beginning to look a bit tired now. End of season cucumbers are often a bit pear-shaped, liked these "Delikate B" ones: 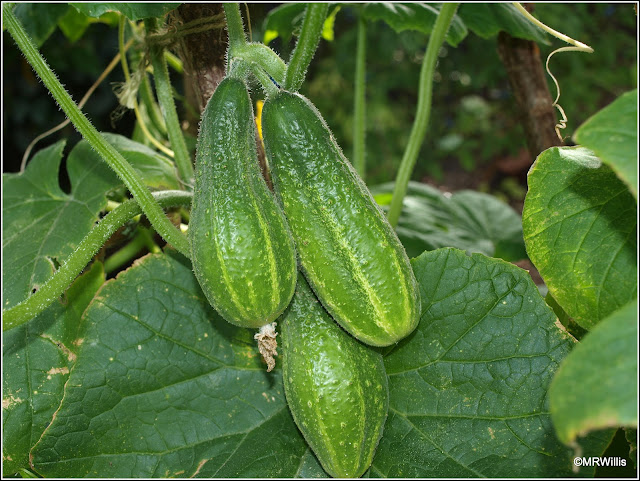 I'm not saying I don't have any nice ones to harvest though. Take a look at this lovely pair of "Vorgebirgstrauben": 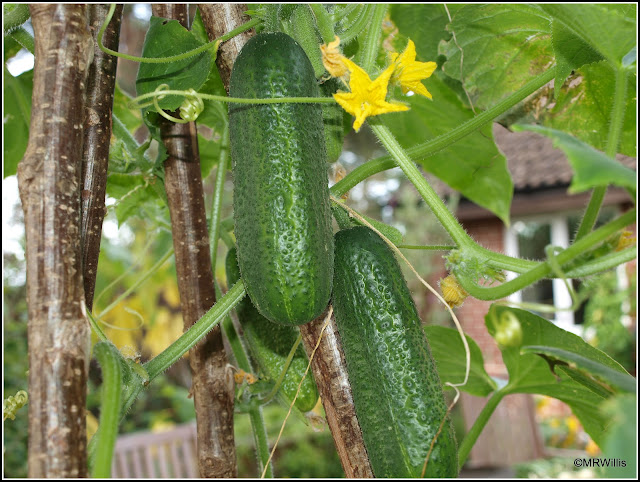 The "Crown Prince" squashes are looking good too. 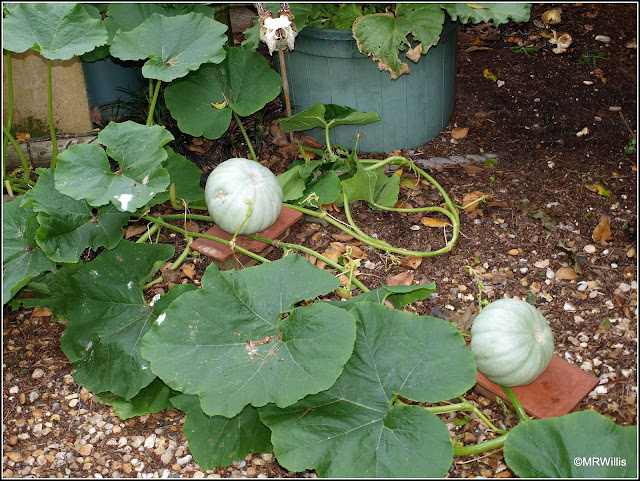 Until a couple of days ago I thought I had four maturing fruits, but then I discovered two more which I hadn't previously seen. One of them is wedged between a compost bin and a fence-post: 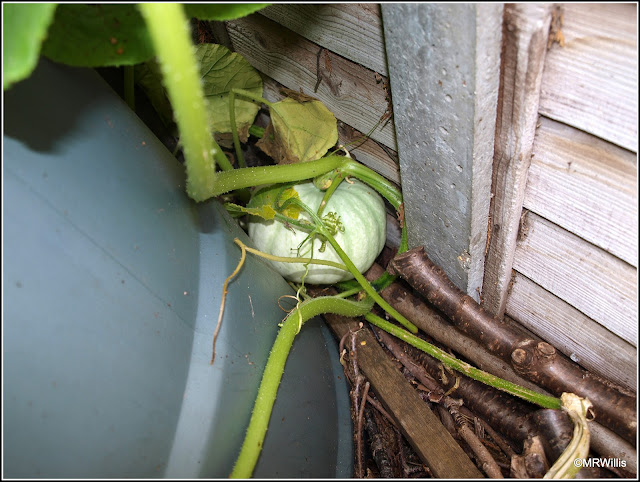 That one looks as if it might develop OK, but this one is another matter... 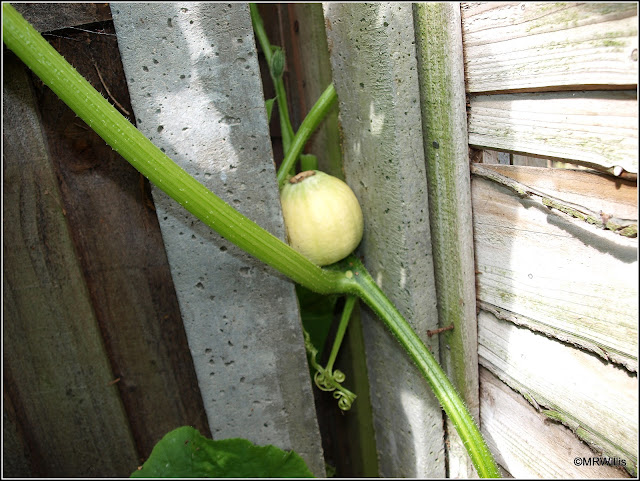 If it does manage to grow in that silly place it will surely end up being the shape of a brick!

My chillis are doing better than I had dared hope. Looking at them now, you would never guess that they had had such a traumatic early life, with that weedkiller-contaminated compost. They are simply a bit behind schedule. Most of the plants have plenty of fruit, but it is still firmly green. As an example, this is one of the "Aji Benito" plants. 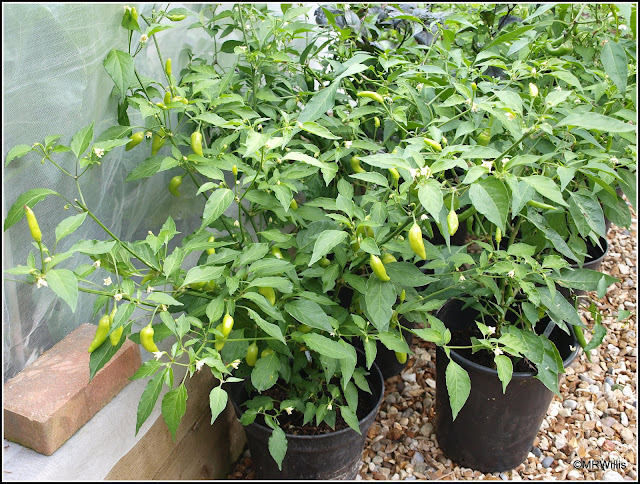 The "Boltardy" beetroot, grown this year in clumps, has been successful too. The roots have matured at different rates, which suits us well since we never want to eat many at any one time. I still have quite a few left from the original row, which I expect to continue harvesting now and then for the next few weeks, but I have also planted out a few more in the hope that they will mature in late Autumn or early Winter. 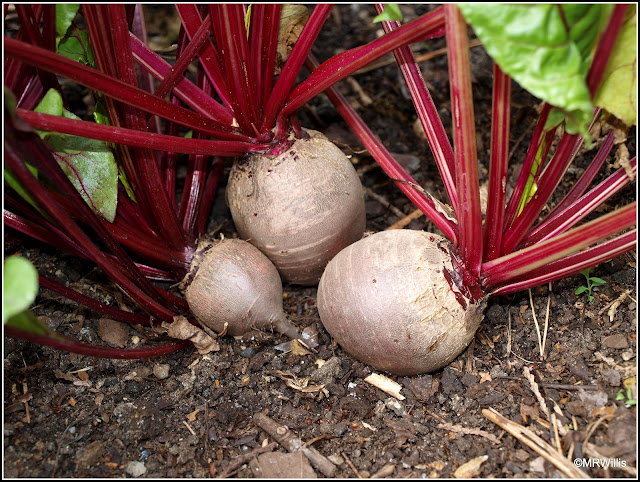 I keep anxiously looking at the apples, willing them to ripen quickly! I've noticed the wasps burrowing into one or two of the fruits, so it really is a race against time. These "Laxton's Superb" don't look too bad though, do they? 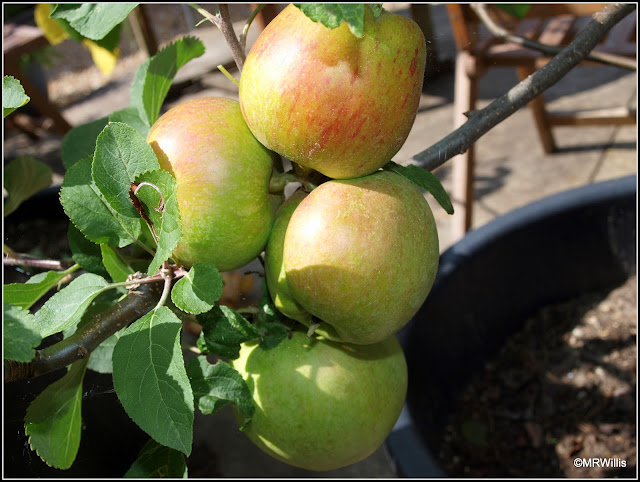 So there you have it - the garden is producing lots of lovely stuff, and there's plenty more to come!
Posted by Mark Willis at 15:30