Before I write anything else, let me just say that I make no claims to be an expert in squash-growing! Last year, when I was maintaining that extra plot at Courtmoor Avenue, I grew three types of squash simply because for the first time I had some space to do so - and space that was mostly in the full sun. I was modestly pleased with the results. 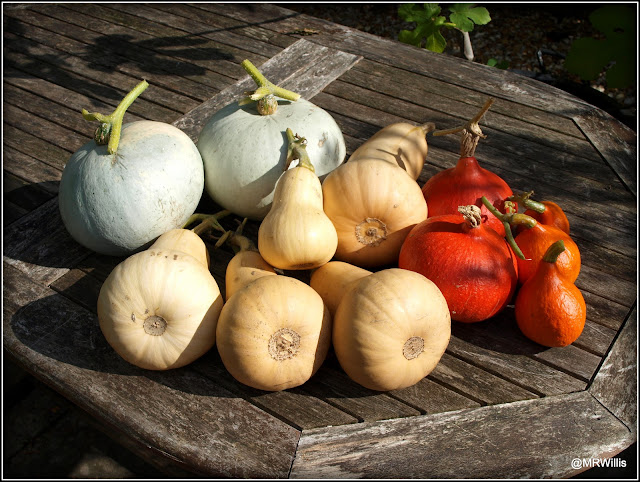 Prior to this, my attempts to grow squash in my own garden were limited to a broadly-unsuccessful experiment with the Three Sisters technique (squash, corn and beans). I tried a variety of Butternut Squash that was allegedly developed for the cool and changeable British climate, but it still didn't do well. I think the reason is that it didn't get enough sunshine in my shady garden.

That all changed earlier this year, when one of my neighbours cut down a huge conifer tree in his garden. This suddenly gave my garden a lot more light, and gave a new lease of life to a patch of ground that had formerly been completely shaded. I decided I'd use it for growing a Crown Prince squash.

In my usual fashion I sowed two squashes, not one, so that I'd have a spare in case anything went wrong. As you probably guessed, nothing went wrong and I couldn't bring myself to discard a perfectly healthy squash plant, so I planted the second one as well. They are seen here, protected by small sticks aimed to keeping the local foxes / cats off them. 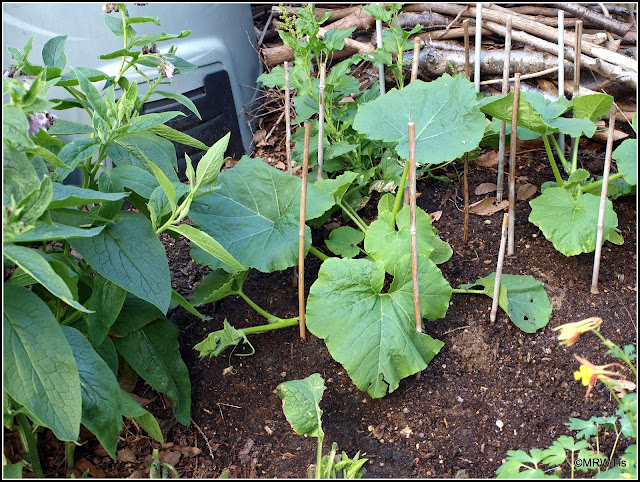 Before long the plants had grown huge and put out some very long runners. I had to pinch out these runners to stop them taking over my whole garden. 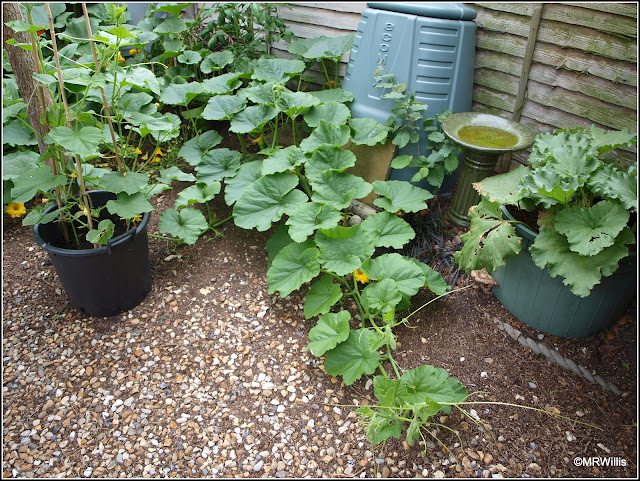 Soon lots of flowers appeared - mostly males to begin with, and then some females. I was very keen to get some fruits started so I artificially pollinated a couple, using a small paintbrush to transfer pollen from male to female. 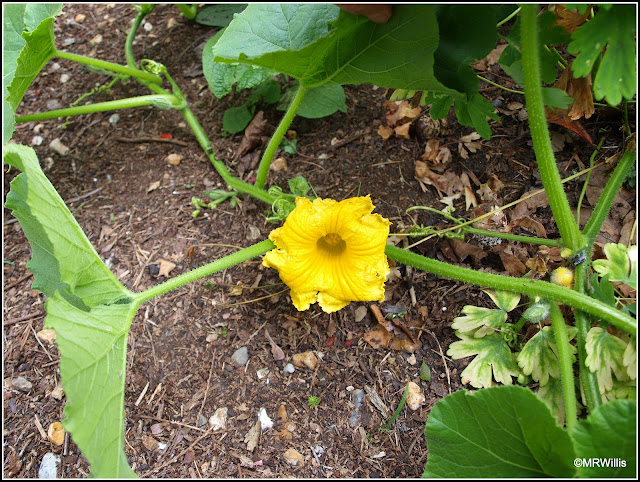 I had set myself a goal of achieving at least one mature fruit from each of the two squash plants, but I think this target will be exceeded. At one stage each plant had three fruits that seemed to have been pollinated. 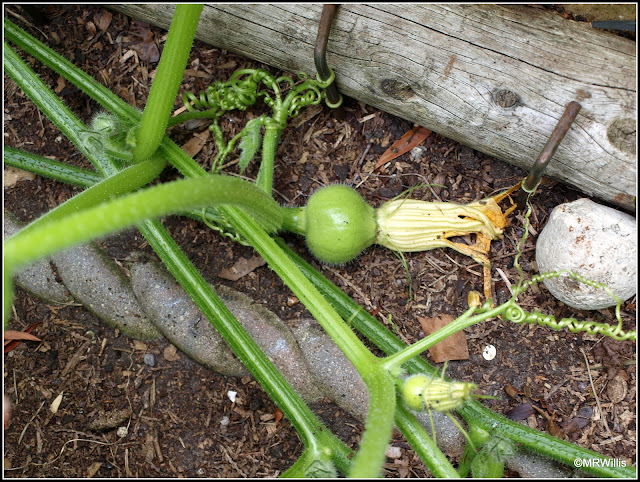 The most promising one decided to take up position in my Parsley patch. 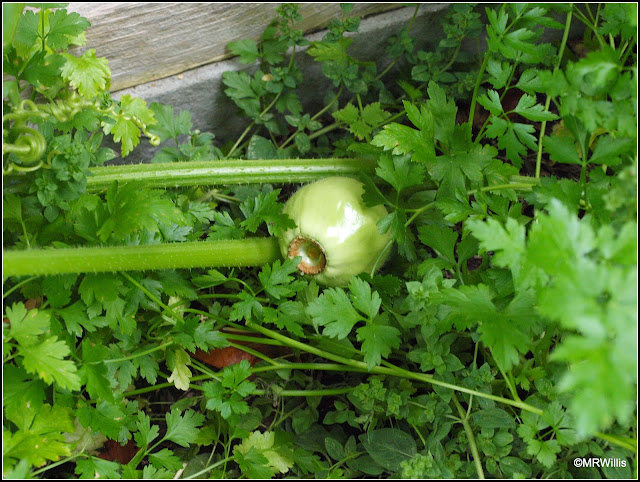 Now, a few weeks later it looks like this: 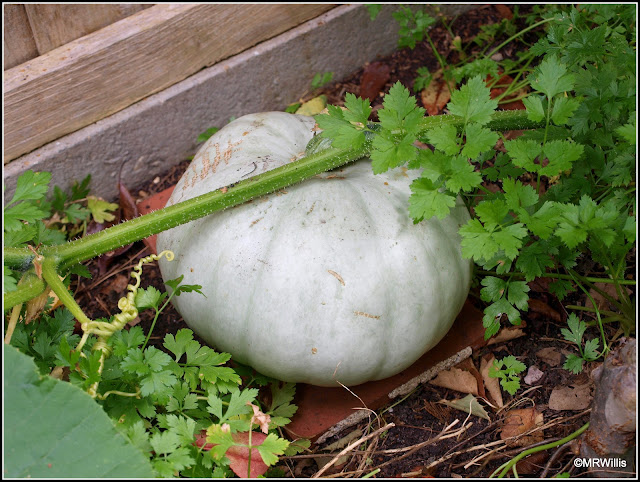 A couple of others look all right too, although they are still small: 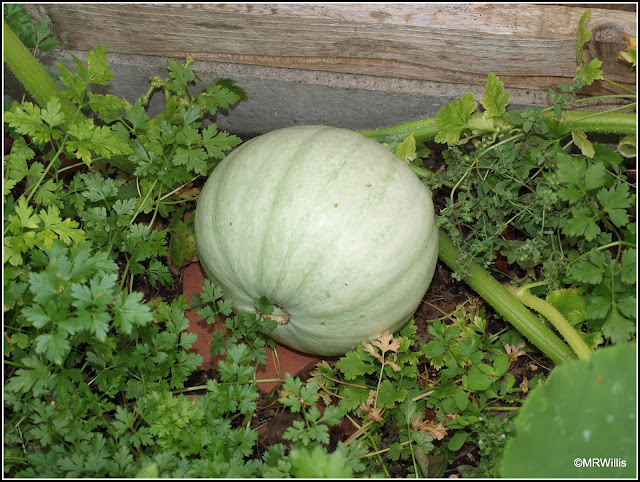 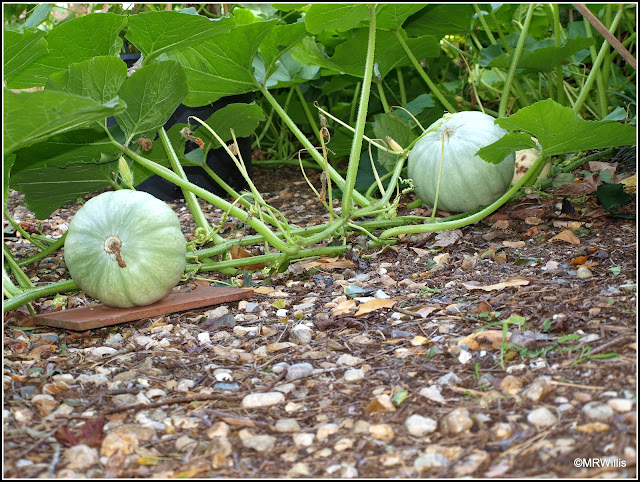 In one spot, two fruit have developed close to one another, though on different runners. 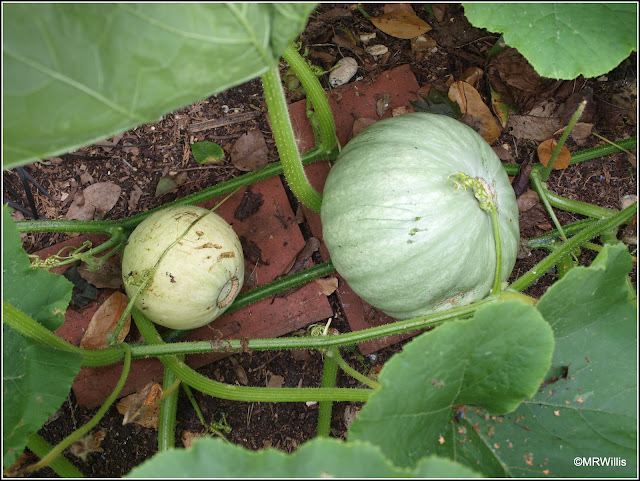 Unfortunately one of the six that had looked promising died when it was about the size of a tennis ball, and one of the pair pictured above looks as it is ailing too. It's the one in the background of this next photo. 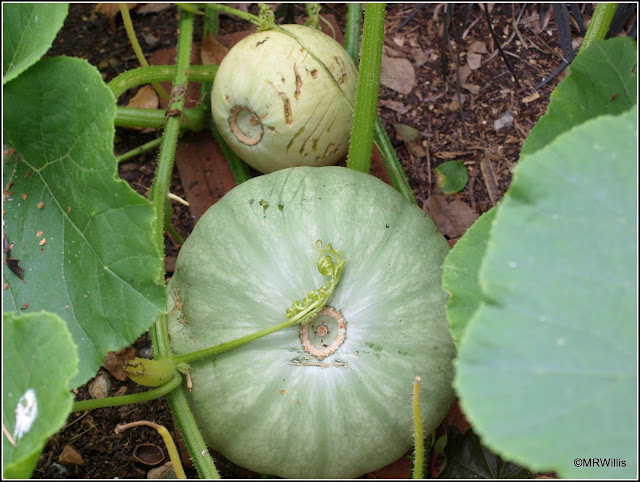 Whilst the larger of the two fruits has a nice healthy blue colour, the small one is a dull yellow and it doesn't seem to be getting any bigger now. The local animals also seem to have been investigating both of them too - those look to me like claw marks.

So, the crop may turn out to be a maximum of four fruits, but you never know, there might be more hidden away under all the luxuriant foliage, waiting to give me a pleasant surprise when everything dies down. 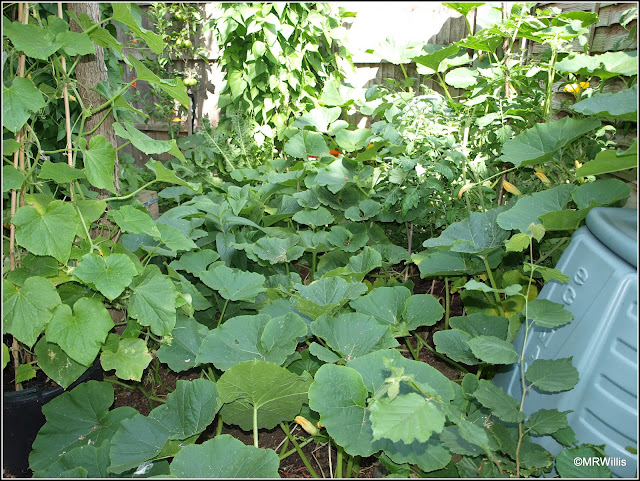 In terms of care, I've not done a lot. I have simply watered the plants a couple of times a week and fed them once a week with "Tomorite" at the same time as feeding my tomatoes. As you will have seen in my photos, I have also placed each of the developing fruits on an old terracotta tile. This helps to keep the squash out of contact with damp soil, which could possibly cause rotting.

So, things seem to be progressing well enough, and if I can maintain this for at least another month (maybe 6 weeks) I should end up with a pretty respectable harvest. Who knows, maybe next year I'll be more ambitious and try some rather less well known varieties? There seem to be lots to choose from.
Posted by Mark Willis at 12:30