At the weekend, I took some more seedlings up to the Courtmoor plot for planting. I've mentioned how the owners of the plot were very keen on New Zealand Spinach, so I expect they will be pleased to see this... 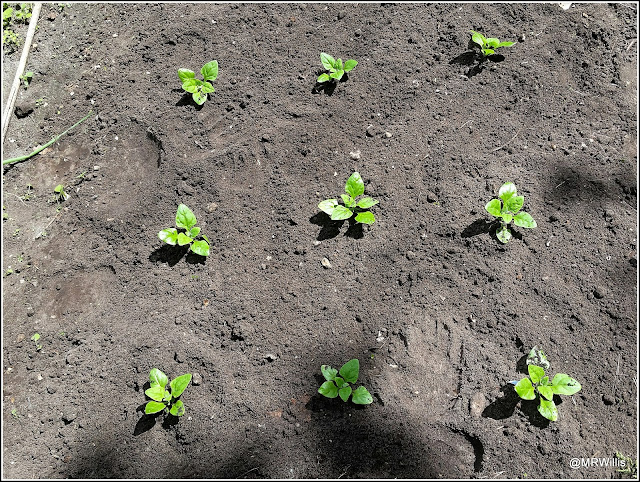 On this occasion I planted 9 seedlings, but I have more waiting in the wings if I can find the space for them! 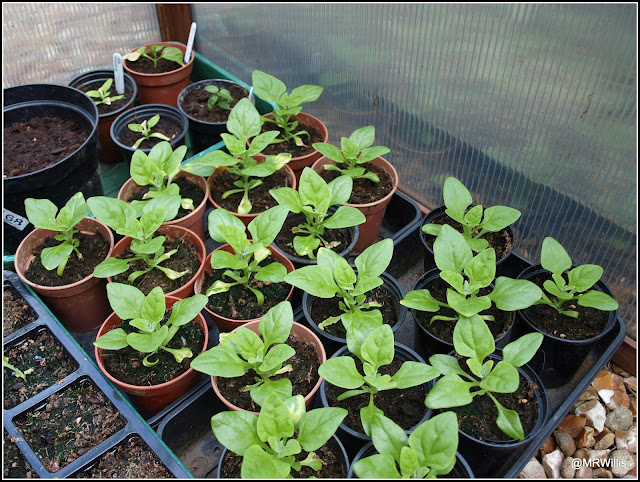 Having never grown this vegetable before I can't vouch for this, but allegedly New Zealand Spinach thrives in hot dry conditions, and requires much less watering than "proper" spinach. This makes it attractive to me, because I have never managed to grow spinach successfully in my garden - it always bolts prematurely in my sandy soil. 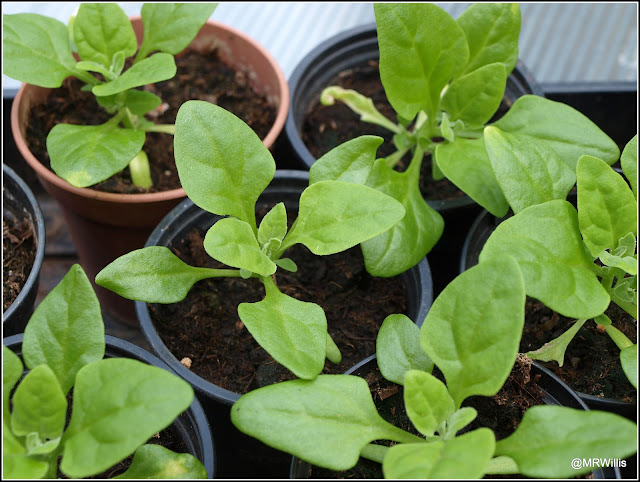 One of the reasons why I only planted 9 New Zealand Spinach plants is that I wanted to leave room for some Dwarf French Beans. Back in my home garden I have been raising two types of Dwarf French Bean. The first is "Canadian Wonder" and the other is (for want of a better name) "Jean's French Bean". These latter of course are ones rescued from the overgrown Courtmoor plot last Autumn. To be honest, I didn't hold out much hope of getting any of them to even germinate, but a few of them have come up. The germination rate for the "Canadian Wonder" has been 100%: 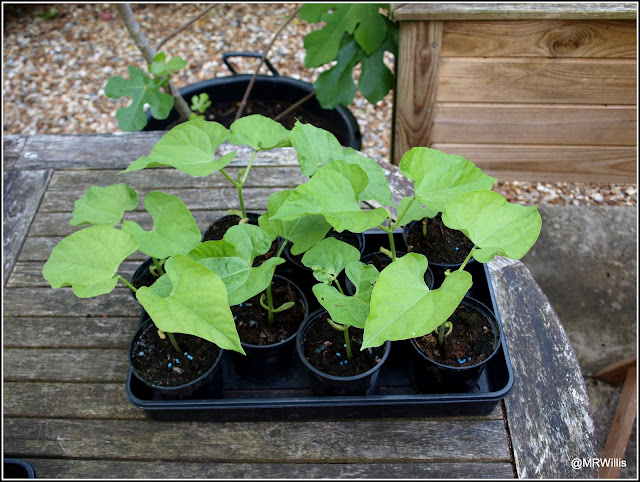 However, only 6 of the 9 "Jean's French Beans" came up, and two of them were "blind" - i.e. without a proper growing-point - so I discarded them. 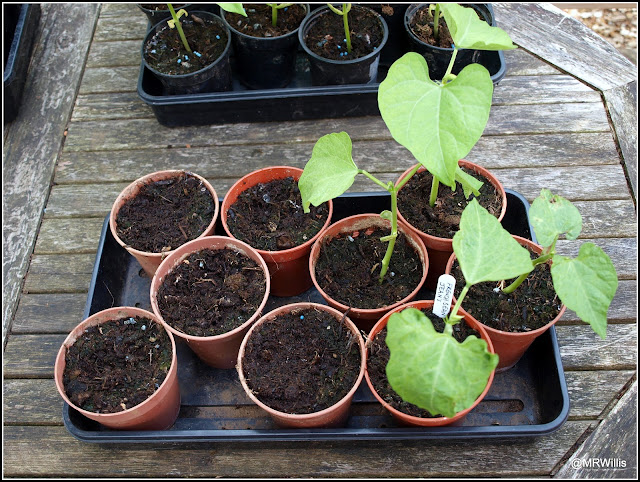 Even the surviving 4 look a bit manky. 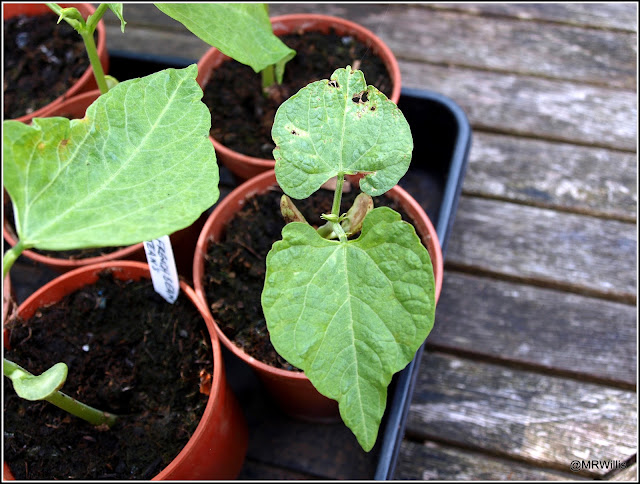 Still, the object of the exercise is to "maintain the succession" and to continue growing this variety of bean, which has been in cultivation on this very same plot for decades. I only need a few pods to mature, and I will take care to select good specimens and harvest them at the right time. This way, I can reasonably hope for an improvement in quality next year.

I planted all of the above (9 x "Canadian Wonder" and 4 x "Jean's French Beans") in a tight block, so that when they get bigger they will provide support for each other. 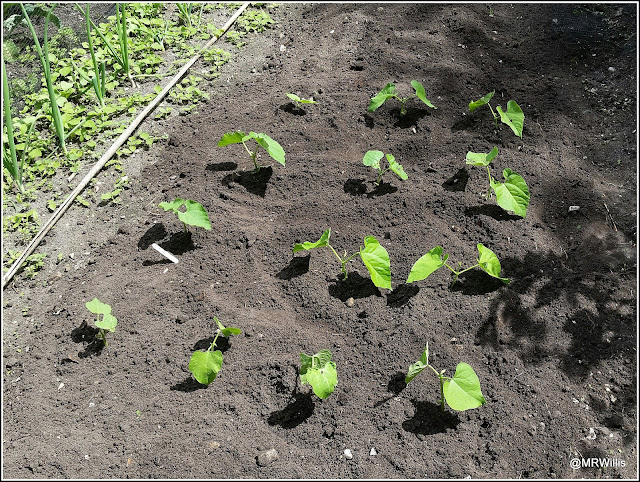 Mindful of the recent pigeon attacks on my brassicas, I have covered the spinach and beans with that old piece of lightweight netting, freed up when I installed the larger net the other day. I have supported it with some Build-a-Balls on the end of metal tubes saved from a now-defunct mini-greenhouse. [We gardeners are consummate hoarders of stuff that will come in useful one day, aren't we?]. The net is pegged down with pegs made from old wire coat-hangers too! 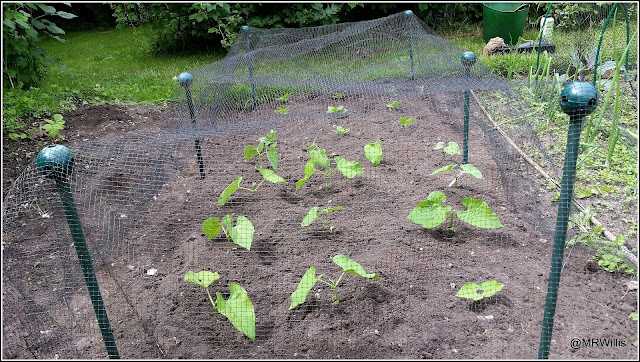 As well as the spinach and beans, I also planted 24 Leeks. It was hot and I was getting tired by this time, so I only have one photo to record this, and it was taken before planting. 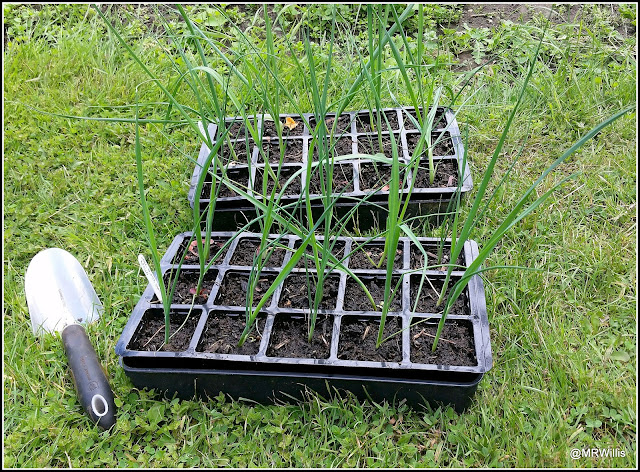 These Leeks are of two varieties - "Musselburgh" and "Apollo". Making maximum use of the available space, they went in the ground vacated by the row of Radishes, which had all been harvested.

Finally for today, here's a pic of one of the "Crown Prince" squashes, showing that it has settled-in nicely and is growing away strongly now. 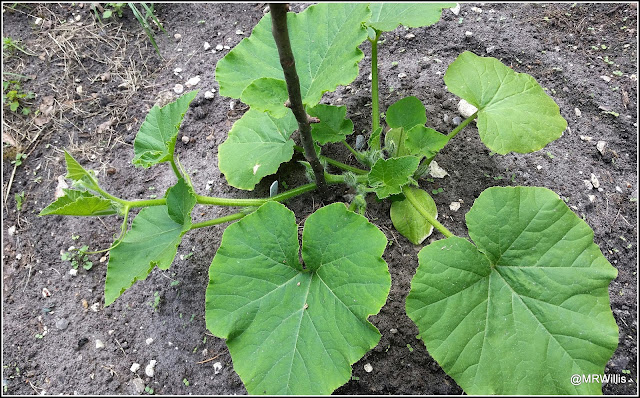