Just recently I seem to have been writing mostly about what I have been doing up at the Courtmoor Avenue plot, so I think I had better redress the balance...

As you would expect in early June, the garden is filling out with lush greenery, spurred into action by warm temperatures and the recent rain. We haven't had the massive thunderstorms and torrential rainfall that many parts of the UK experienced last week. In fact, the soil here is still a lot drier than we gardeners would like. 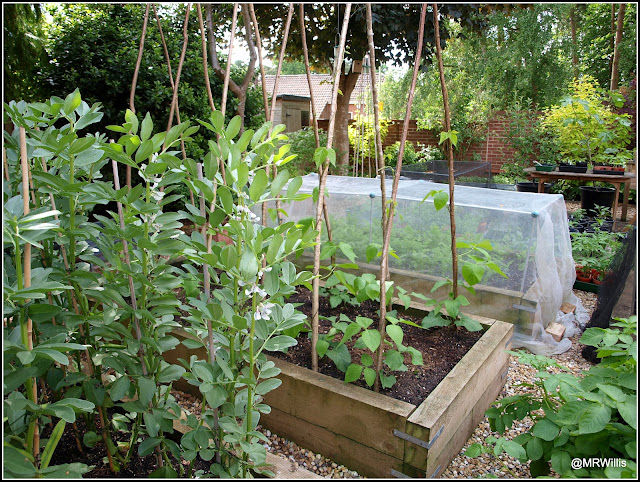 The first of my Broad Beans are very nearly ready for picking - just a few more days now. 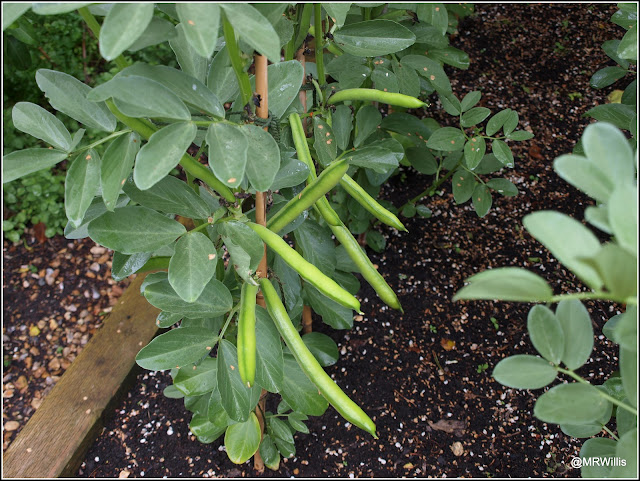 Likewise, I expect to be harvesting the first of my container-grown potatoes very soon. The plants have flowered now and the foliage is beginning to turn yellow and flop over. 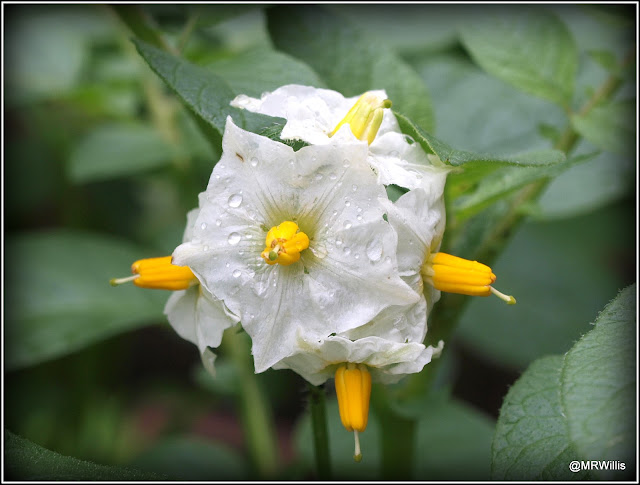 If the pots weren't in those plastic greenhouse things, the potato foliage would be horizontal on the ground by now I think. When that happens, the plant ceases to grow. I have even heard that some gardeners stake the plants upright to keep them growing. 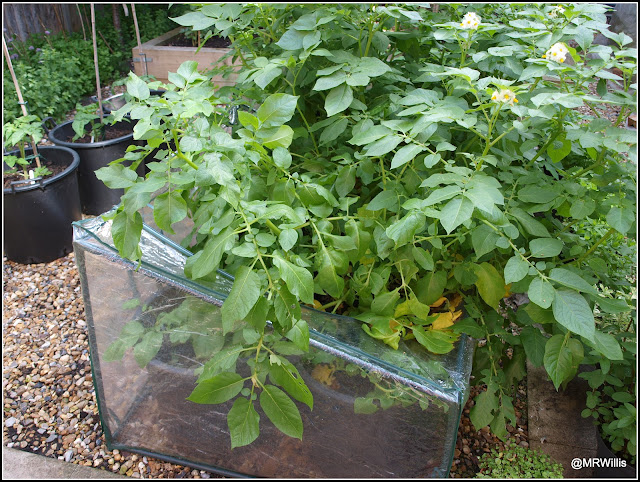 This is the Carrot bed, encased in its protective Enviromesh. 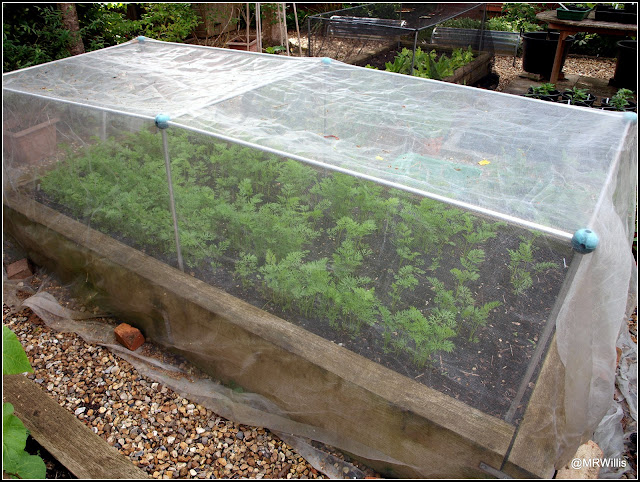 The germination of my carrots (4 different types) was very variable this year, veering towards the "Must re-sow" state, but I decided not to do any re-sowing, but also no thinning either. I think I will probably get a reasonable crop in the end, though none of the types is anywhere near ready yet.

The cucumbers are looking good at present. They are starting to climb quite nicely. I have given them a couple of circles of string to help them to stay upright until they manage to firmly grip the canes. 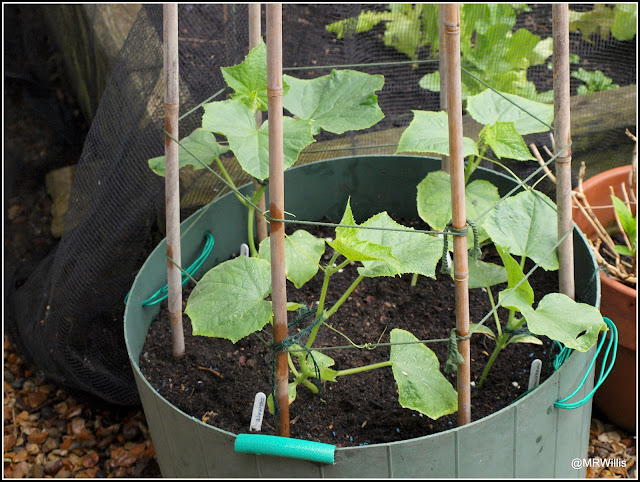 I have started picking lettuce now. Again, the germination rate was quite poor, so I didn't need to do much thinning. These two rows are from different packs of mixed varieties. 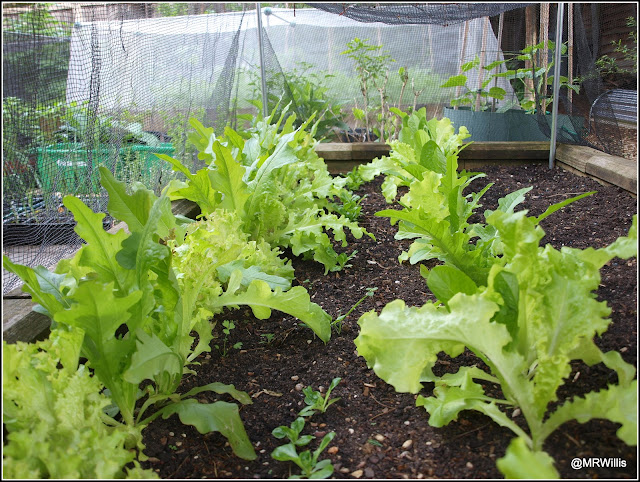 I still have loads of little plants waiting to go up to Courtmoor. To be honest, I will be glad when they are all planted-up. My own garden seems very much like a Nursery this year!

As many of you will know, flowers are not a major theme in my garden, but I do have a few ornamental plants, such as this Geum "Mrs Bradshaw". 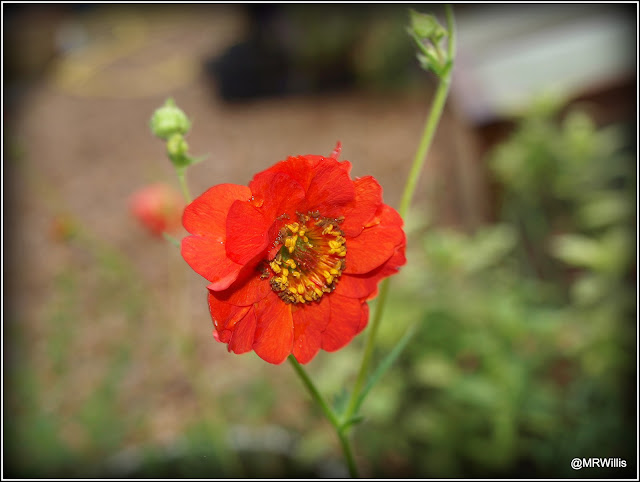 This lovely pale Osteospermum was grown from seeds brought back years ago from a holiday in the South of France, so it has significance for me. My camera can't really do justice to its colour. It's not white, but a very pale mauve. 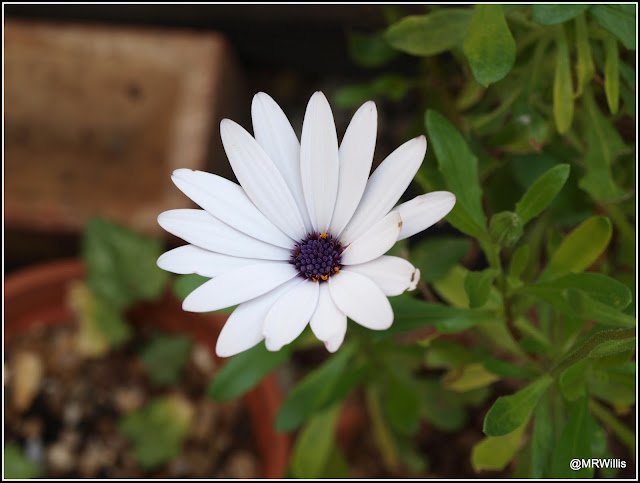 This fern is also one I have had for several year. It's "Dryopteris Erythrosora". At this time of year it is producing its new fronds. They start off being this sort of bronzy-orange colour, and as they mature they gradually turn green. 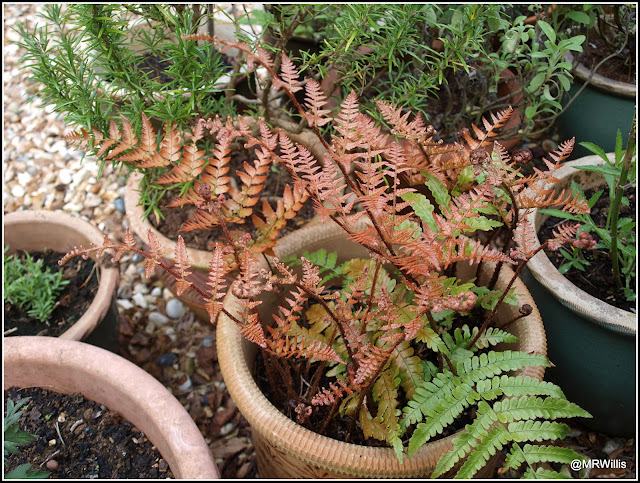 The last thing I want to show you today is some evidence that I'm already planning ahead for late Summer / Autumn. These tiny seedlings just emerging are Radicchio "Palla Rossa", which will mature in about September / October. 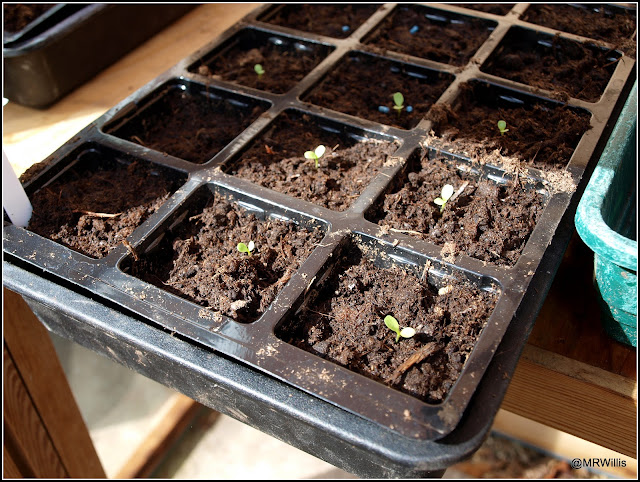