One of the first edible mushrooms to appear each year is Calocybe gambosa, aka St.George's Mushroom. It is called this because it typically appears on around 23rd April, which in England is the feast day of our patron saint, St.George. 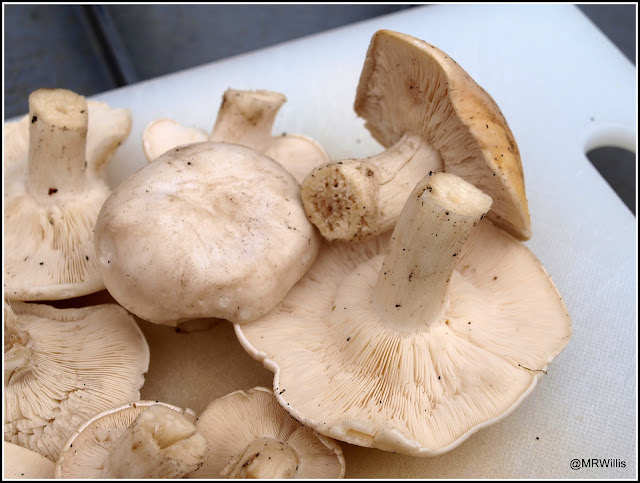 There are other edible fungi around at this time of year, such as the Dryad's Saddle (Polyporus squamosus) and the Chicken of the Woods (Laetiporus sulphureus), but the St.George's mushroom is about the only cap-and-stem fungus to be seen at present, making it hard to misidentify.

Here are some features that can help to identify it with confidence:

First, the colour. It is initially almost white, but as they age the fruitbodies become darker, going through a sort of cream colour, and eventually becoming a light tan. 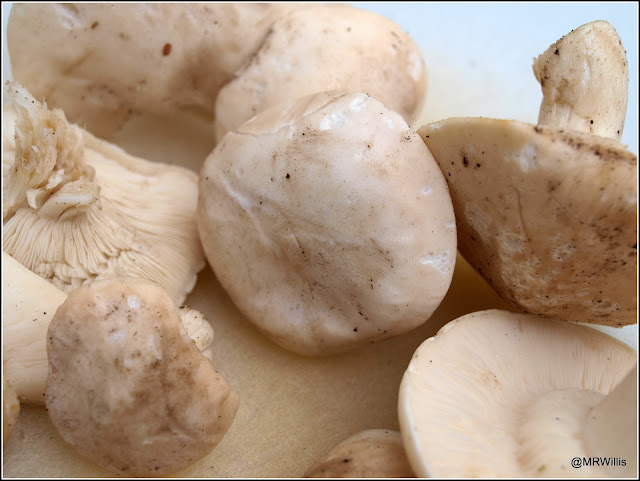 Second, the shape of the stipe (stem), which is thick and often "clavate" or club-shaped, being thicker at the bottom and thinner near where it joins the cap. 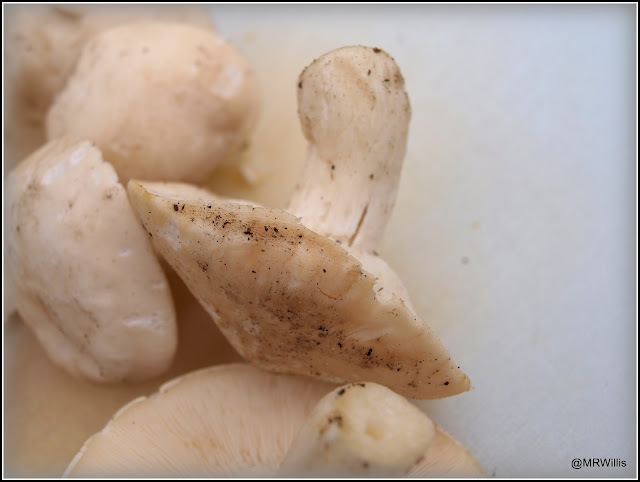 In larger specimens it is also often hollow. 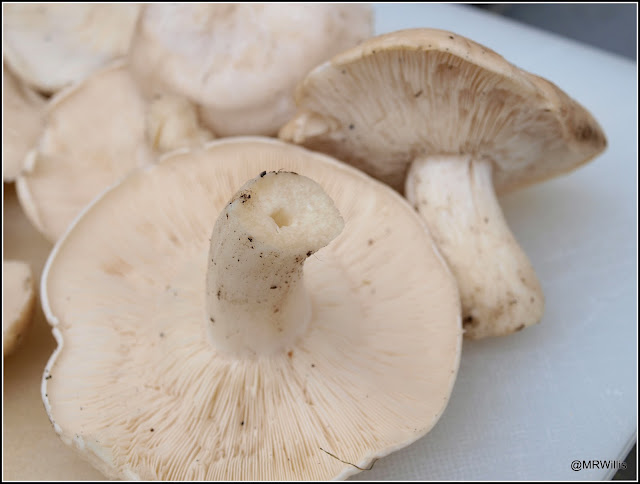 Thirdly, the shape of the cap, which is broadly round, though often deeply indented. It also usually has an inrolled edge. 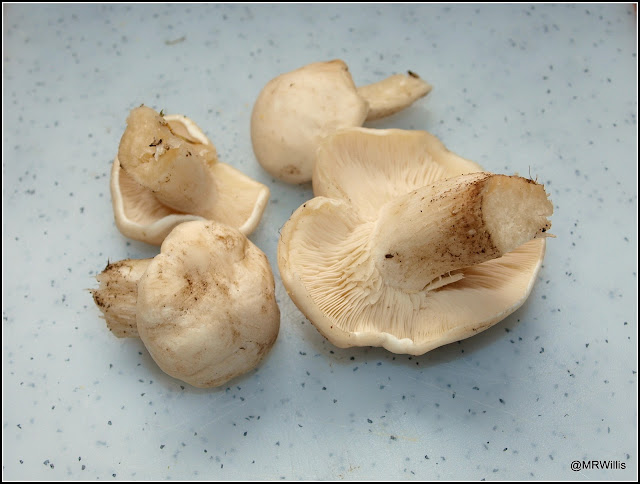 Fourthly, the gills on the underside of the cap are "crowded" or very close together, and "sinuate" or wavy. They do not change colour when bruised. The spores which drop from them are white. 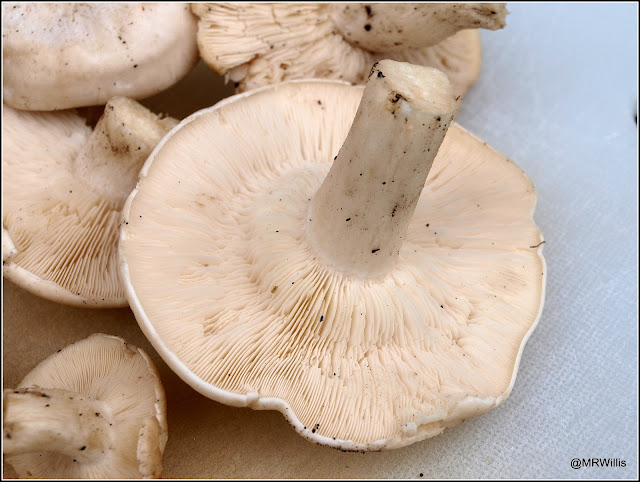 Fifth, and probably most important, is the smell. It is often described as "mealy" or like wet flour, and sometimes as reminiscent of watermelon or cucumber - even as like Plasticine! Personally, I agree with the mealy description, but whatever you think it smells like you have to admit that it's distinctive. Once smelled, never forgotten! Naturally, fresh specimens smell stronger and old specimens are usually insipid.

Then there is the habitat. St.George's seem to prefer short grass as their habitat. It is for this reason that they are frequently seen on roadside verges and roundabouts, though also on field margins. They often, but not always, appear in circular "Fairy-rings". 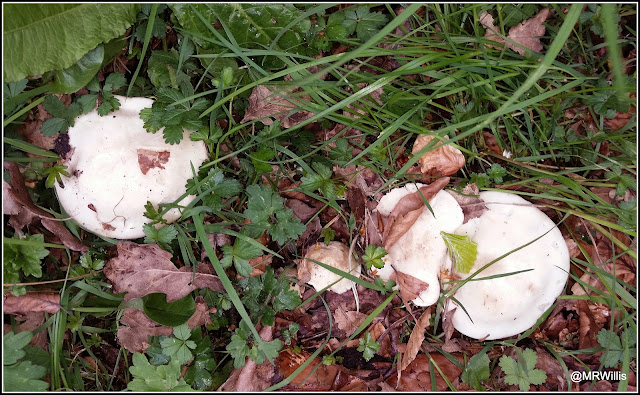 Conveniently, this type of mushroom generally reappears in the same place year after year, so if you find some, even if they are not very good, you can earmark the site for re-visiting it the following year, and aim to pick the mushrooms at their best. This week I found a very "past-it" patch almost hidden away in a patch of brambles in some predominantly conifer woodland. It only yielded one useable mushroom - but I'll be back! 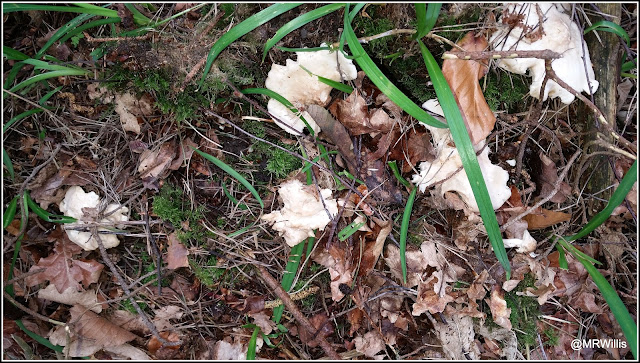 Edibilty: This mushroom is rated by knowledgeable foragers as Good, though maybe not as a first class delicacy. Its main attraction is that it appears early in the year, before all the more highly-rated fungi like Ceps, Chanterelles and Hedgehogs become available. You can use them just like cultivated mushrooms. St.George's are also supposedly one of the few wild fungus types that are safe to eat raw, though I can't vouch for this.
Posted by Mark Willis at 12:30