Casualties and a nice find

The brassicas on my Courtmoor plot have suffered a couple of casualties. Everyone can see that this is not a healthy plant! 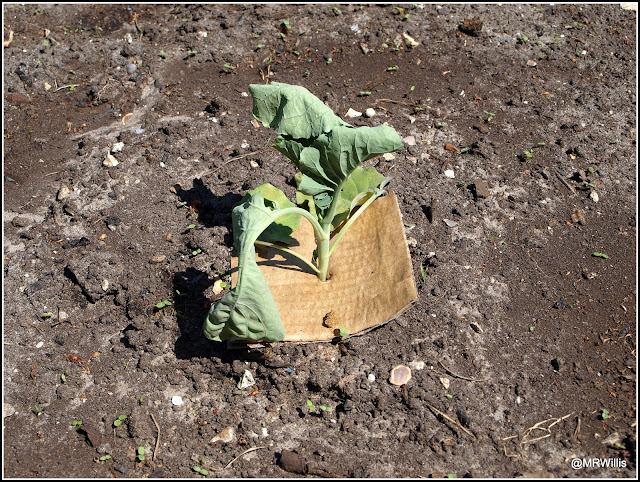 You may recall that the purpose of the cardboard collar is to deter the Cabbage Root Fly from laying eggs on or near the plant's stem, at ground level. Well, it looks like I was too late. Both of the casualties were Kaibroc plants; the others seem unaffected. However, my cardboard collars are exonerated, because it is evident that the flies laid their eggs on these plants before they were planted-out, hence before the collars were deployed. Back in my own garden, my only spare of this type is similarly afflicted. Here you can see it in the foreground of the next photo, all pale, limp and sickly whilst the other plants (spare cabbages and Brussels Sprouts) behind it still look fine. 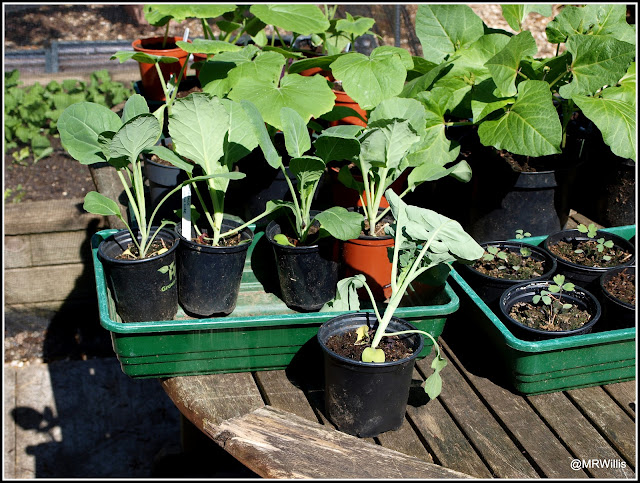 I conducted a Post Mortem. This is what I found: 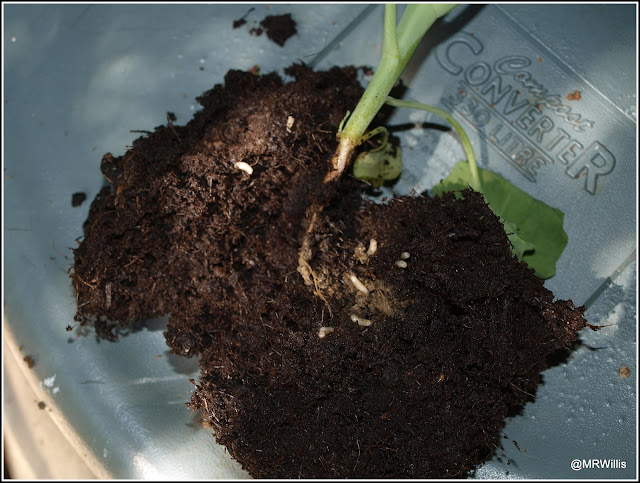 You can see that the soil around the stem and roots of this seedling is swarming with little white grubs. These are the larvae of the Cabbage Root Fly. 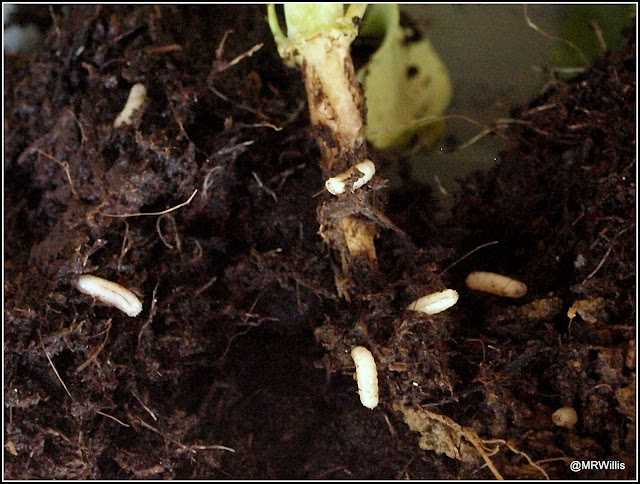 When the larvae hatch they feed on the roots and stem of the brassica plant, stripping them bare, and causing sudden, irreversible collapse. 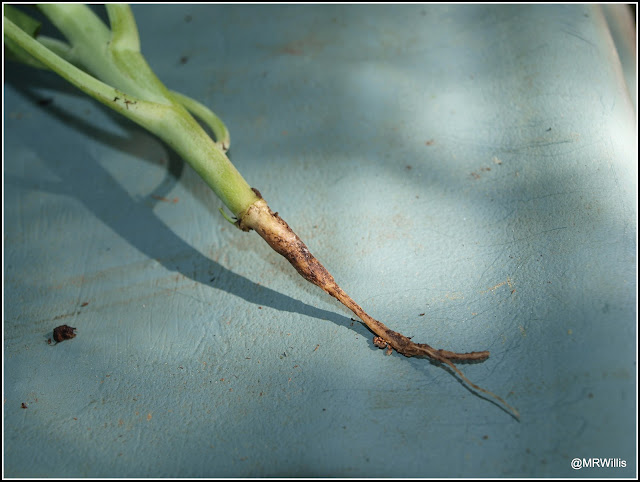 There is no way back from this. The only solution is to re-sow or re-plant. Since my only spare Kaibroc plant was evidently beyond hope, I filled the gaps up at the plot with other things - one cauliflower and one red cabbage - and I immediately sowed some more Kaibroc seeds. Kaibroc grows very quickly, so it is not too late for me to get a harvest before the Summer ends. I just hope that none of the other plants are infested, because I don't have many more spares.

Incidentally, one way of dealing with the Cabbage Root Fly is to apply nematodes to the planting area shortly before planting. 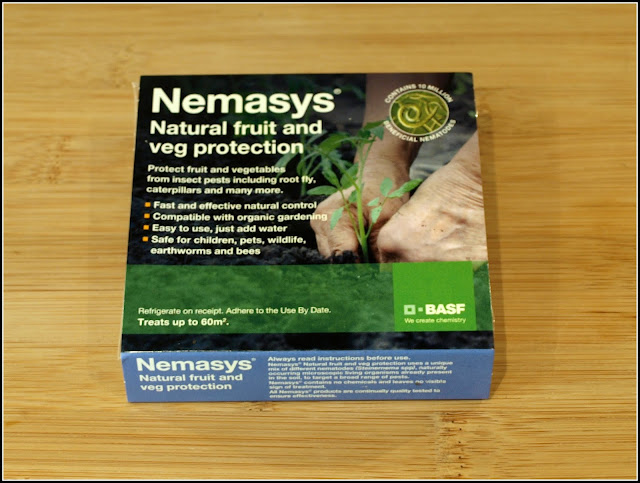 These will kill most of the grubs and/or the eggs. However, it can be an expensive option when you have to treat a big area. In the raised beds in my own garden, it is a viable solution, but not in the bigger, more open plot.

On a rather more cheerful note, I want now to describe the "nice find" mentioned in the title of this post. This is it: 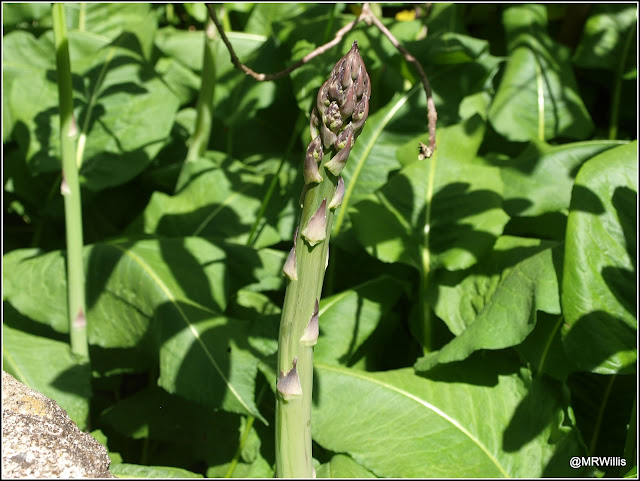 Yep, Asparagus! Purely by chance, I spotted some spears poking up in amongst the weeds in one of the sadly neglected flower-beds. Look at the next photo and see how many Asparagus spears you can spot... 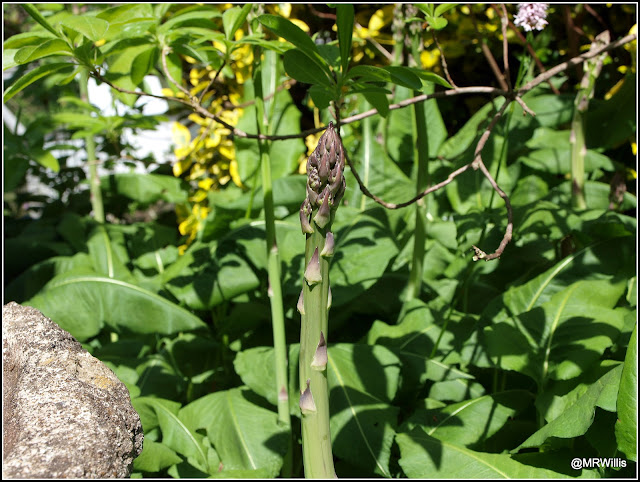 There seems to be about 4 or 5 plants, but they are very overgrown and the soil they are in is very dry because lots of quite big shrubs are competing for the moisture. 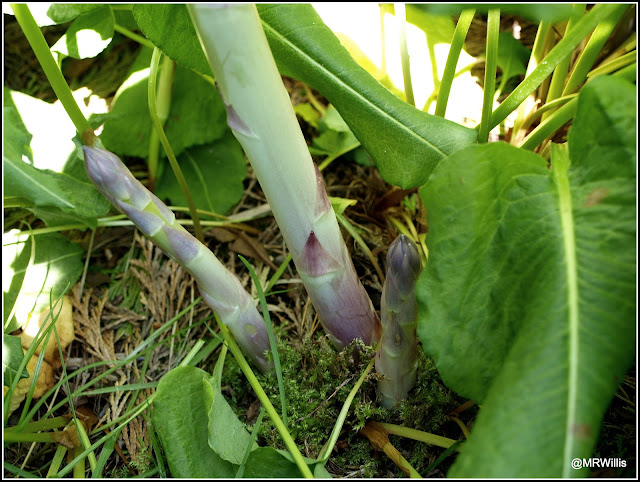 I mentioned the Asparagus to Rupert, the plot-owner, and he very kindly told me to help myself to it. I found 16 spears of useable size. This is what I brought home: 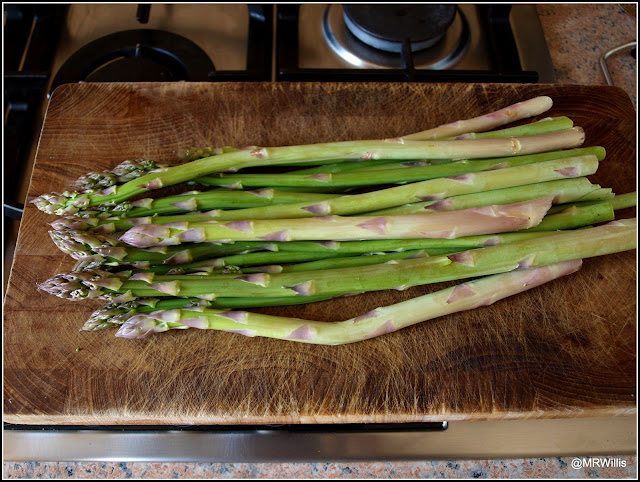 Now that I know these Asparagus plants exist, maybe I'll give them a bit of TLC and nurture them a bit. I'll start with weeding and watering...
Posted by Mark Willis at 12:30