It's not all Good News

On Thursday I went up to my Courtmoor plot to plant some more brassicas (of which, more in a moment). Rupert (the homeowner) was out in the garden having a smoke, and we had a little chat before I started work. I showed him the brassicas I was about to plant. 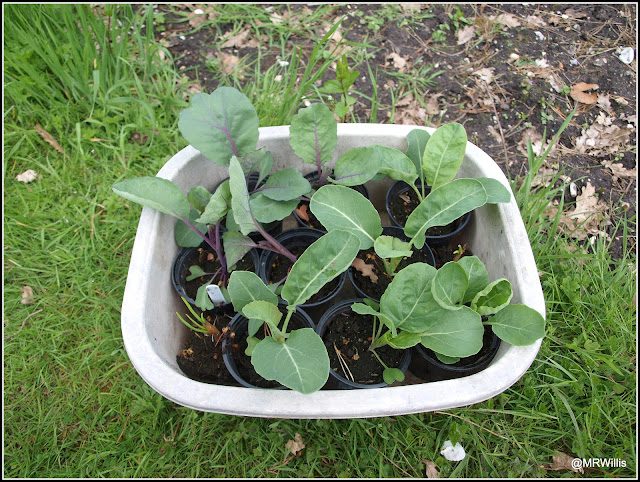 "Oooh, cabbages!" he said. "Clubroot! Clubroot! I haven't grown cabbages 'ere for yers, because they always got clubroot." (He's Welsh). I was instantly alarmed. "How long is it since you grew cabbages, Rupert?" "Oh, about 12 yers, I think". Phew. I reckon that means that the clubroot has probably disappeared (hopefully).

Anyway, I went and planted the brassicas, hoping for the best. This time I put in 4 red cabbages ("Red Drumhead"), 2 cauliflower ("All Year Round") and 3 Brussels sprout ("Evesham Special"). At least, that's what I thought I had planted until I sat down to write this post. Looking closely at the photo of the brassica seedlings I'm now convinced that it was 3 cauliflowers (longer, thinner leaves) and 2 Brussels sprouts (shorter, rounder leaves). That's the penalty you pay for not labelling every pot!


I was more sure of my ground with the red cabbages... Here they are, planted-up, protected with cardboard collars, and watered-in. 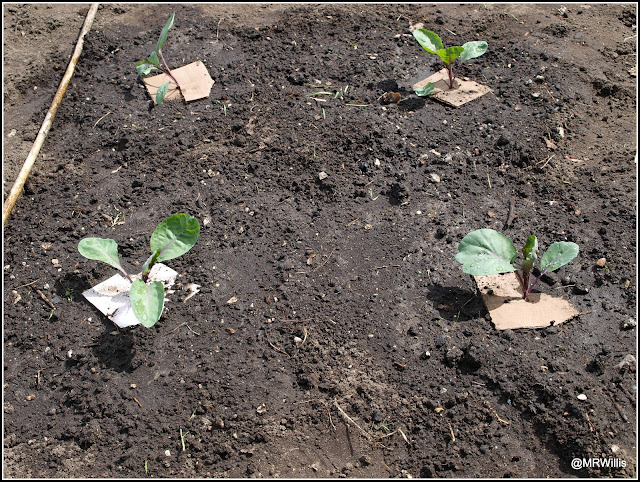 I have deliberately left lots of room for more of each type of brassica - it's just that I couldn't carry all of them with me on this occasion (I had walked, because my car was in the garage for servicing). 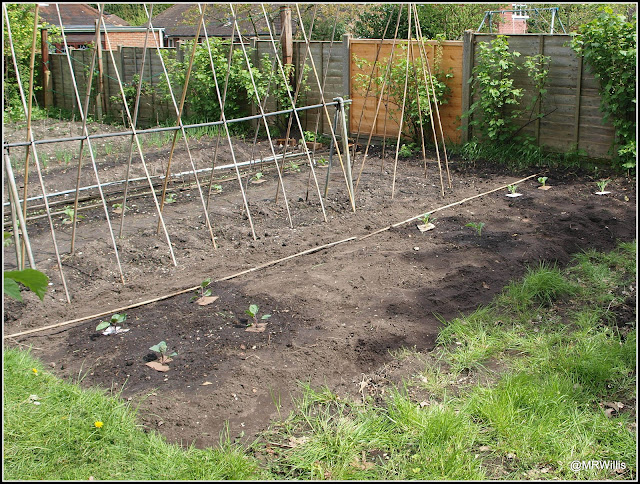 Apart from the clubroot threat, there was more bad news. Some of the potatoes had been frosted, presumably last Sunday night, when it was very cold. Some had been hit fairly lightly. 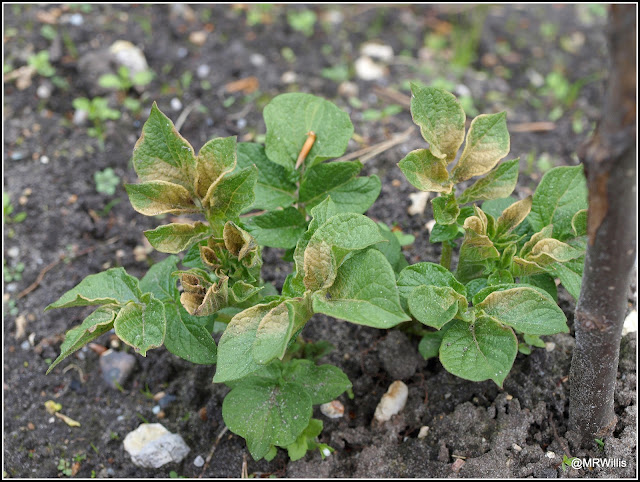 Others had suffered more severely. 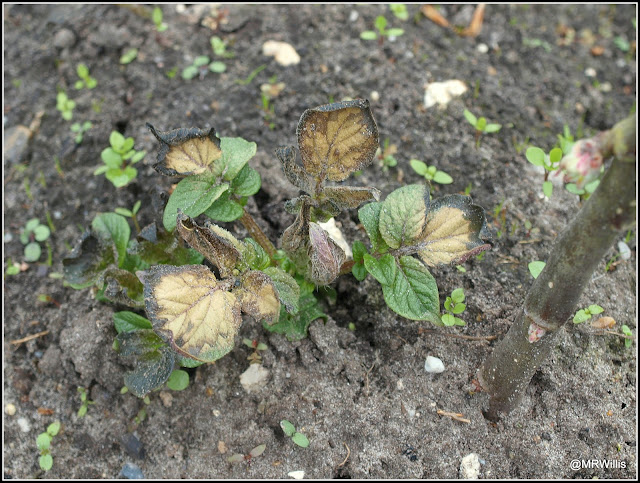 And some had survived unscathed. This is "Sarpo Una", which is evidently a lot less frost-tender than the others.


The Courtmoor plot must be a lot colder than my own garden, where the temperature didn't go below 3C. I had covered my container-grown potatoes with fleece, and zipped-up the mini greenhouses, as a precaution. 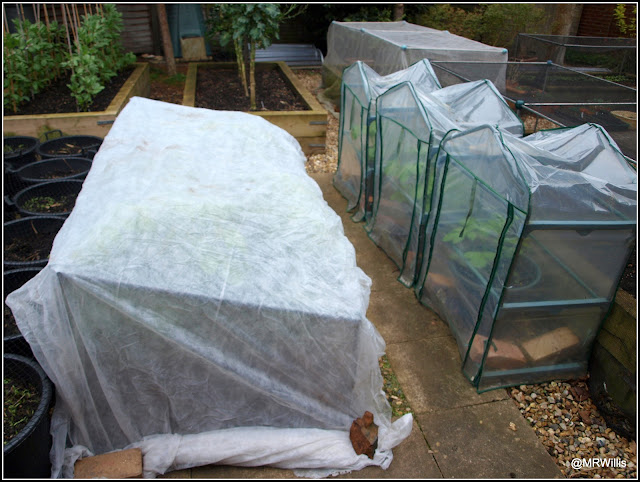 I'm not too worried by the frost damage, because I'm fairly sure that the plants will recover all right. It may have just set them back a week or so.

Elsewhere on the plot, the Broad Beans are covered in flowers now. The BB plants are not looking particularly healthy though. They are certainly a lot smaller and less "luxuriant" than the ones in my own garden. Some of their lower leaves are very yellow: 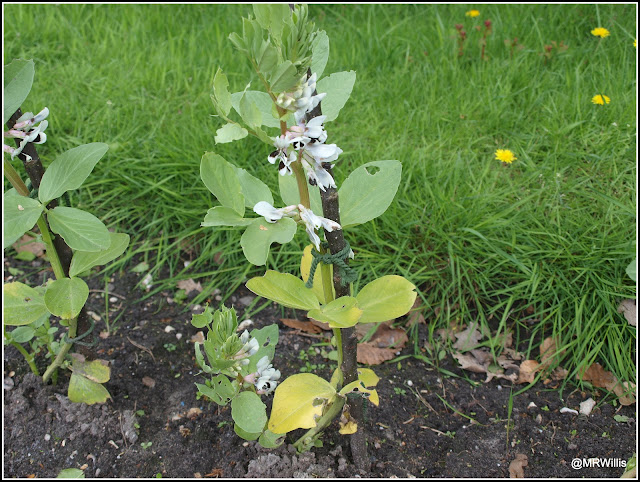 Early last week I gave them a dose of "Growmore" general fertiliser, which I think will give them a boost, so hopefully they will do OK in the long run.

At least the cabbages I planted last Saturday are looking all right, and they haven't been mauled by slugs (yet). Here you see them next to my row of Radishes. 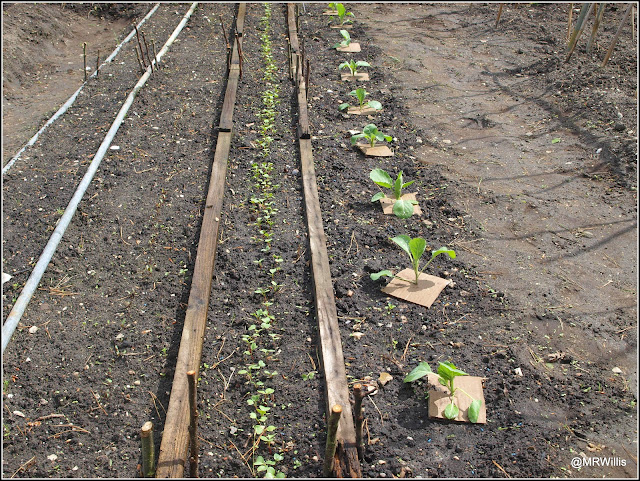 I sowed the Radishes fairly thickly, expecting modest levels of germination because I was using old part-used packets of seed, but they seem to have ALL germinated. Before coming home this time I set-to and thinned them out to about an inch apart. You can't see them in my photo, but the Beetroot next to the Radishes have also germinated and I will soon have to thin them too.