Well, it's the middle of May, and my new plot is almost full up already! The only unprepared ground is one little strip about a metre wide, adjacent to the Raspberry canes (visible in the second photo). This is where the New Zealand Spinach is going to be planted, but there's no hurry since the plants are still very small.


On Saturday I planted the rest of the beans. 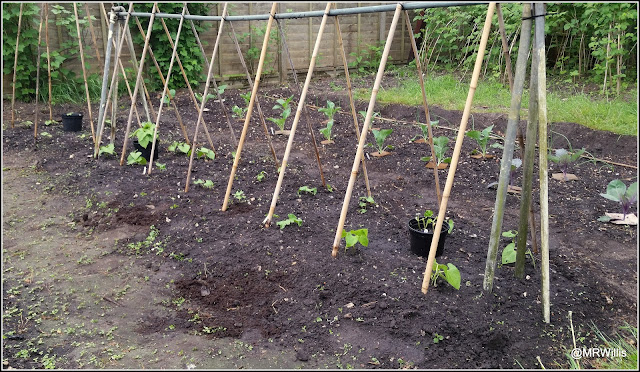 As well as the "Cherokee Trail Of Tears" and Tunny" beans I planted last week, there are now 15 of "Jean's Beans" Runners and 8 of climbing French Bean "Cobra". The Runners were still not very strong (I'm sure you know why by now), so I gave them the best position - in the middle of the row. Normally Runner Beans are pretty big plants and I usually give them each their own cane, but since these ones are small, I put 2 per cane (with one exception, since there was an odd number).


The "Cobra" plants went at the end of the row nearest the grass path, again 2 per cane. Incidentally, if things go the way they usually do, the "Cobra" beans will produce their crop well before the Runners are ready. This would be nice because it would mean that I would not be inundated with all the beans being ready at once.


Between the beanpoles and the Raspberries is my main Brassica patch. In it there are 4 each of red cabbage, cauliflower and Kaibroc, and 6 Brussels Sprouts. There is also one row of 24 "Ailsa Craig" onions (next to the bamboo canes in the foreground of the photo below). 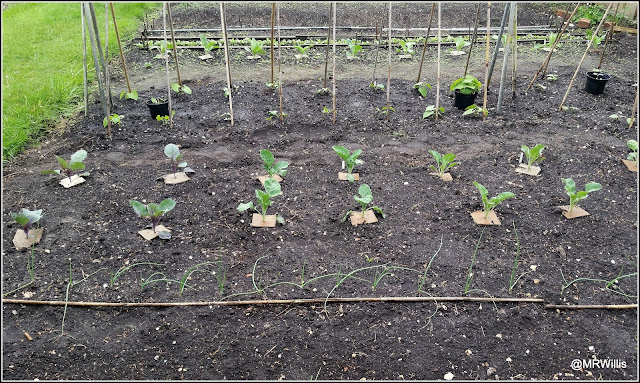 On the other side of the beanpoles you might just be able to make out some more brassica plants. This is a row of 10 green cabbages. They are in this next photo too. 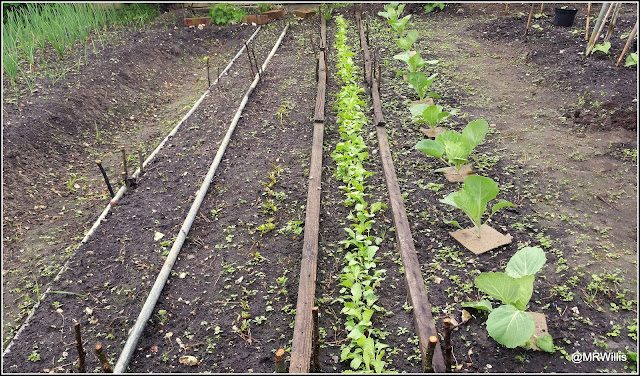 To the left of the cabbages (in the "tram-lines"!) are a row of radishes, then a row of beetroot and a row of parsnips. The parsnips are only just beginning to germinate and it is hard to identify them amongst the mass of annual weeds.

Beyond the parsnips is my onion and shallot bed, seen in the foreground here:- 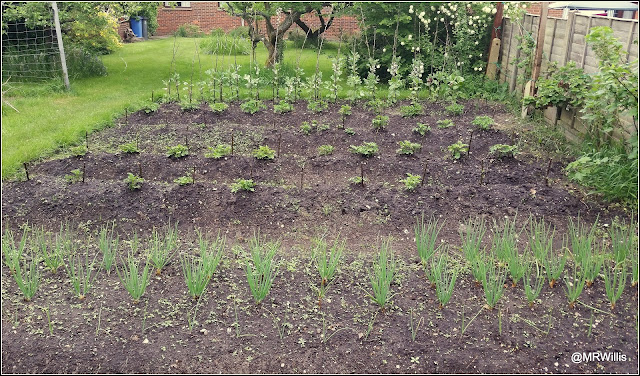 There is another row of "Ailsa Craig" brown onions, 15 little clumps of "Long Red Florence" onions (each with between 3 and 6 plants, I think), and 44 shallots.

Beyond the onion bed you can see 4 rows of potatoes at various stages of development. Curiously, there have been a couple of No-shows here. The tiny "Foremost" potatoes saved from last year were never going to be very vigorous, but I am hopeful that all the tubers I bought at that Potato Day in January will eventually show up!

Furthest from the camera, at the far end of the plot are the Broad Beans. The plants are still not very big or strong compared with the ones in my own garden, but they have plenty of flowers on them, so I still hope to get a worthwhile crop.

Here's an overall view of the plot: 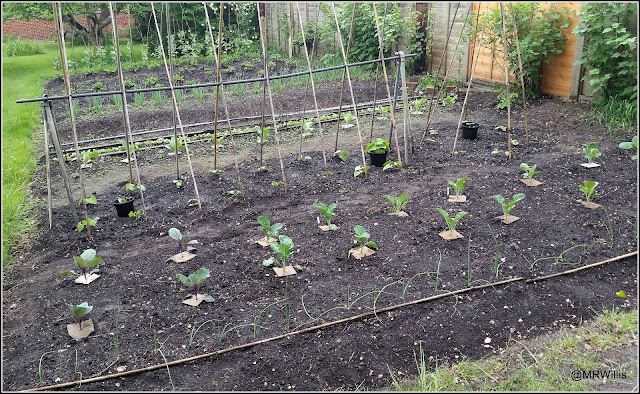 I still haven't done anything about establishing the Pumpkin Patch, but it won't take me long to do, and meanwhile the squash plants that will be going into it are growing away steadily in pots at home. I don't think they will have to wait too much longer...

P.S. The last one of the shallots finally sprouted - that's a Full House then, 45 / 45. Better late than never! 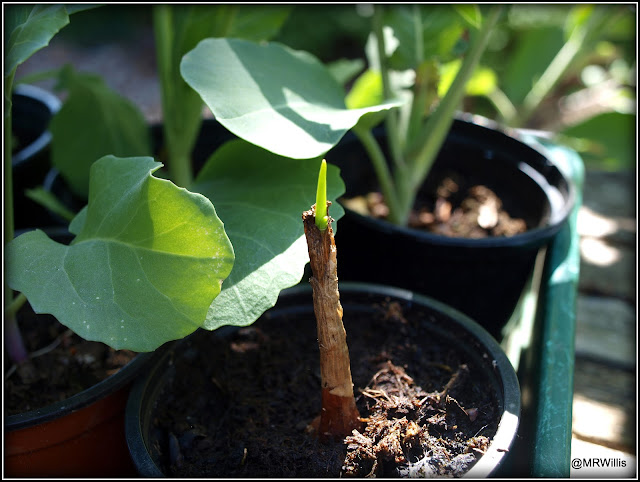