A couple of days ago I paid another visit to my plot at Courtmoor Avenue - the first for two weeks, because the weather has kept me away. I have promised myself that I'll do a bit of digging every time I go, so that I will eventually get the whole plot done (I'm at about 75% now, I reckon), but this time I just made a token effort, because I really wanted to do some work on the currant bushes and raspberry canes. The latter are just beginning to show signs of new growth, so they need sorting-out very soon. 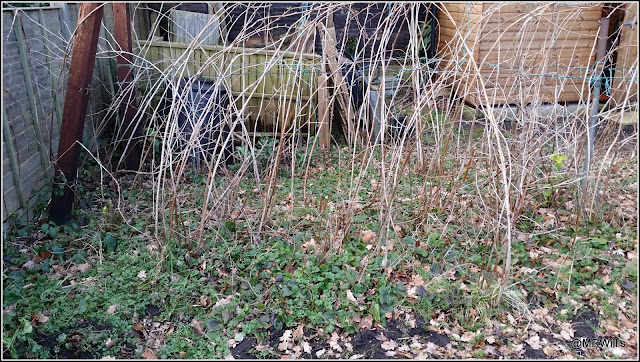 I managed to have a chat with the plot owner gentleman this time, and asked him about the raspberries. He has no idea what variety they are ("lost in the mists of time...") but confirmed that they are all Summer-fruiting ones, so the canes currently there are the ones which were new last year. There is no sign just yet of this year's new canes coming up, but there are lots of stumps from last year's fruiting canes (which I presume were cut down in the early Autumn...) 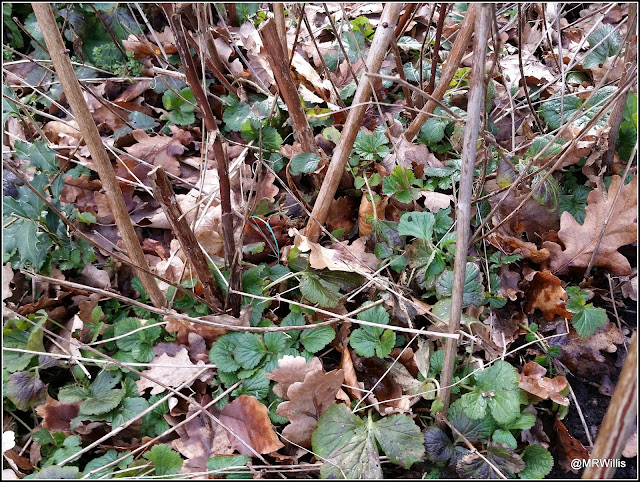 In amongst the canes are lots and lots of weeds, mostly Geum Urbanum (Wood Avens). Looking this one up to confirm its identity, I was amused to find that you can actually use it as a food crop. See here... Wood Avens. 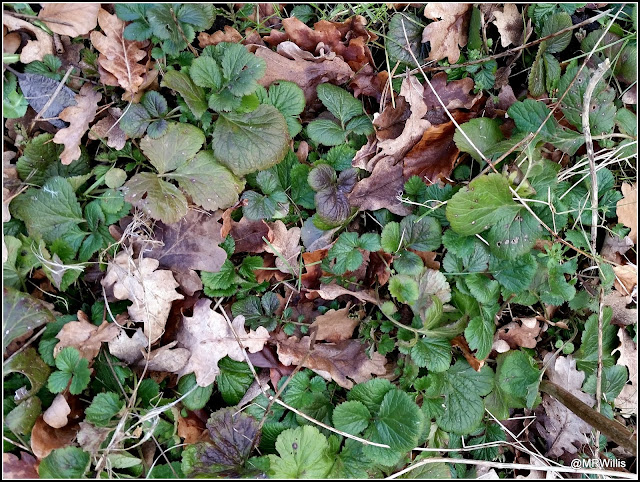 Fortunately it is relatively easy to remove. It just needs a bit of care to avoid damaging the raspberry plants. The area which I am going to clear consists of two rows, each about 5 metres long, spaced about 1.5 metres apart: 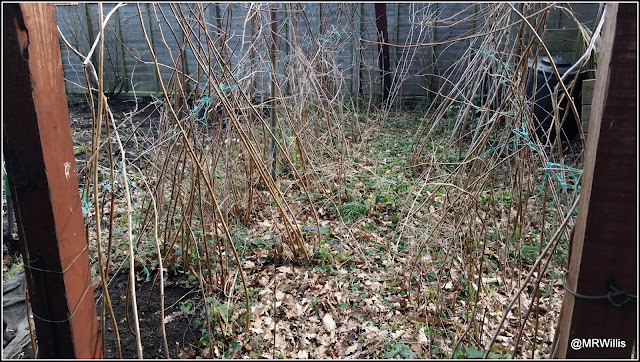 There are more canes elsewhere in the garden, but I'm going to try to ignore them for now!

On this occasion I was only able to make a start on the task, and it will need a lot more time to finish, but at least I have crossed a psychological boundary by doing the first bit of it. I did about a third of one row. 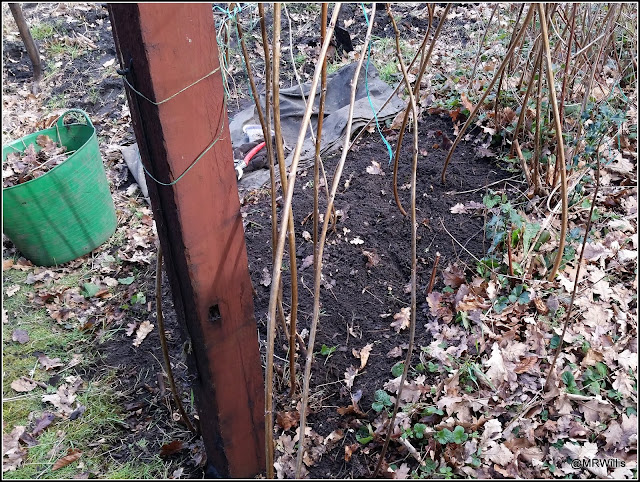 I'm not claiming to be an expert on this, but what I have done is remove the weeds, cut down last year's stumps, and remove all the thin and weak-looking canes, leaving just the big strong ones which will bear this year's fruit. 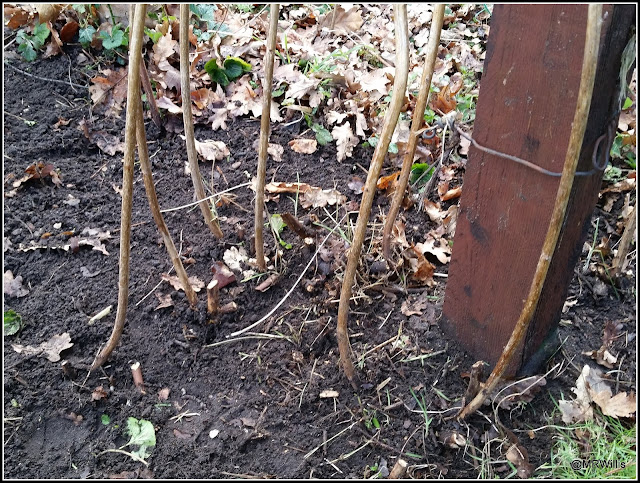 The canes were tied-in with a horizontal line of string at a height of about 4 feet, but it has mostly rotted away, so I plan to re-do it when I have cleared both rows.

As well as making a start on the raspberries, I finished the pruning of the blackcurrant bushes along the line of the fence. This task proceeded much as I have described before, so suffice it to say that I took out a lot of old (mainly dead) wood, leaving the best, strongest-looking and predominantly upright stems:

I was also able to create two new plants, by cutting off drooping branches that had rooted of their own accord where they had touched the soil. This one in particular looks very promising. It already has a number of good branches of its own. Following accepted practice, I planted it with the root/branch union just below the level of the soil, which will encourage it to produce more new branches at ground level. 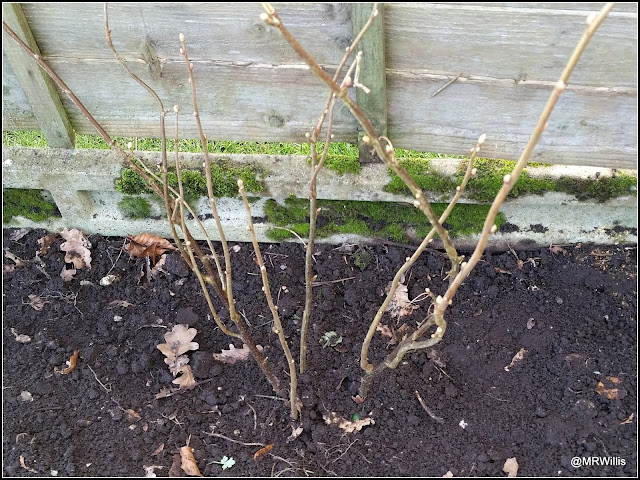 With the addition of the three new plants, there are now eight blackcurrants along the fence, so there ought to be a decent crop, though I don't expect the new ones to produce fruit this year.

While I was pruning one of the blackcurrant bushes I found this little chap lurking in the long grass: 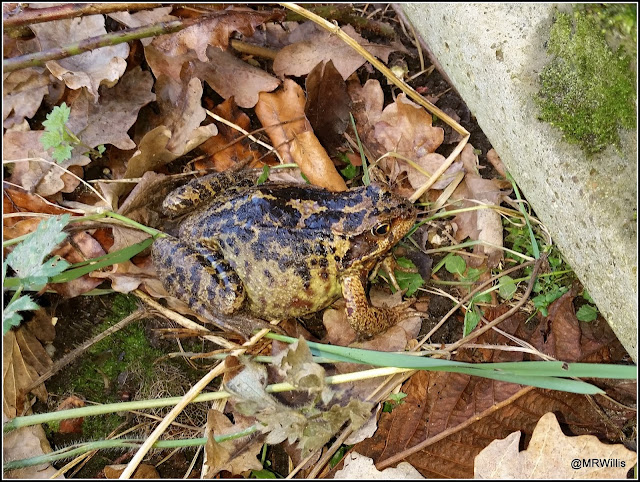 I think he is a toad. I hope so, because toads are reputed to be voracious eaters of slugs! He wasn't too impressed about having his hideaway cleared out, and rather reluctantly stomped away to find somewhere else to rest up.

I mentioned at the start of this post about the continued digging. This is one of the reasons why I want to dig the whole plot over:- 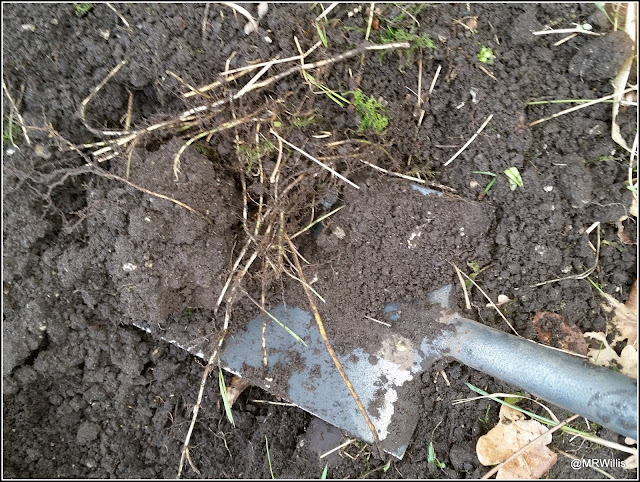 Yes, practically every spadeful throws up more Couch Grass roots, especially over by the fence where the blackcurrants are, because until recently the next-door garden was very unkempt, and Couch Grass spreads very rapidly if you give it a chance. As I dig, I do my best to remove as much of the grass as I can. I know it would be over-optimistic to expect to be able to remove ALL of it on this one occasion, because it can re-grow from even a tiny piece of root. However, with constant attention I think I will be able to keep it in check. 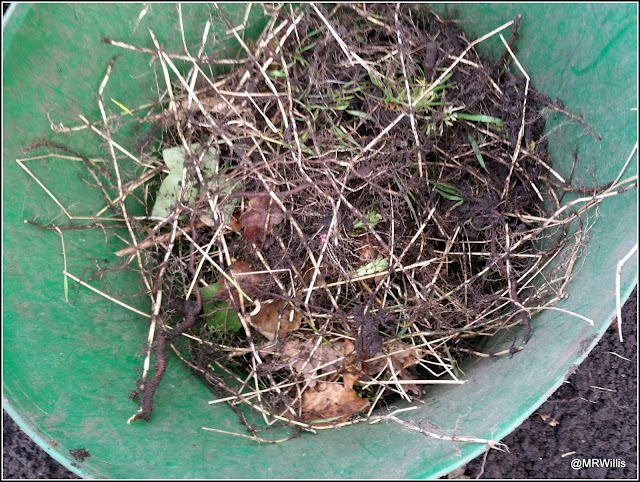 I'm hoping that before the end of March I will be able to plant the first of my potatoes. The soil on this plot is very light and drains well. With all the rain (and snow) we have had recently, you might expect it to be waterlogged, but it isn't. I just need to decide exactly where to begin planting, and how to delineate the rows, because at present, the whole plot is just one big open expanse. 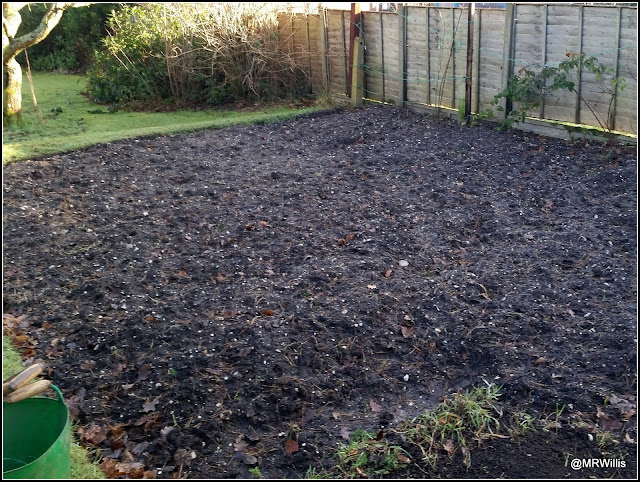 I'm not used to this - it's very different to the raised beds in my own garden!