A new source of meat

As you know, I am very fond of vegetables, but I am not a vegetarian. I like meat - especially good-quality meat - and I have recently found a new source of it, and it is this that I want to write about today. 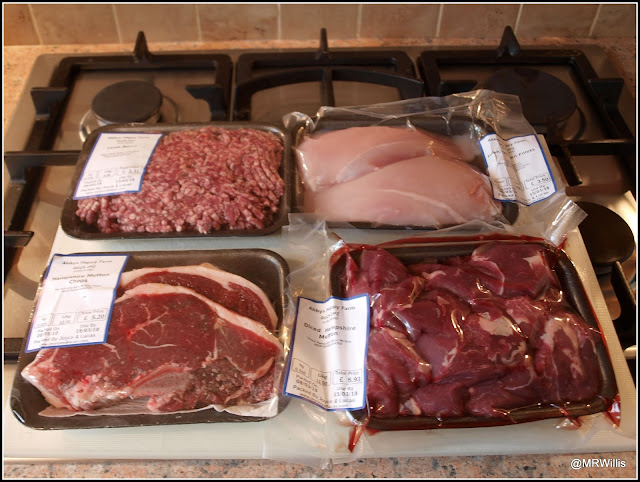 A few weeks ago we discovered (purely by chance) that there is a small market in nearby Farnborough every Friday. When I say small, I mean only 3 or 4 stalls, but one of those belongs to the delightfully named "Abby's Happy Farm". This stall carries a surprisingly wide range of meat products, as well as complementary items like eggs (chicken and duck), honey, vinegars, chutneys etc. The first time we saw the stall we were a bit dubious, because Farnborough is not noted for its high-class shops or cuisine, and stalls selling cheap meat of indeterminate origin would most likely be more typical there. However, we had a chat with the stallholder (I know she is not Abby!) and were pleasantly surprised to find that all the meat comes from grass-fed animals reared on local, traceable farms, and much of it from Abby's Happy Farm itself, which is in the village of Herriard (about 15 miles from here). Incidentally, that village is also the place of origin of the award-winning cheese called Tunworth.

Anyway, cutting a long story short, we bought a few items to try. We initially tried some fairly "safe" things like plain Pork sausages, Chicken breast and shin of Beef, mainly so that we could compare them with their supermarket equivalents. We were not disappointed. When cooked, the beef went meltingly tender and the sausages didn't ooze watery white gunk! I would say that the prices were marginally more than what you would pay in a supermarket, but the quality was a huge amount better. When you get good meat, you need less of it too, because it seems more satisfying and there is often less to throw away (e.g. fat and gristle).


Next time we visited the stall we were a bit more adventurous, and bought some less-ordinary items like a Ham hock, a whole Chicken, two Venison steaks, some Merguez sausages (good in a tagine, with cous-cous) and even a piece of Morcilla (a Spanish-style blood sausage, a bit like Black Pudding). To be honest, we didn't enjoy the Ham hock, but that's probably more a reflection on our tastes than the quality of the meat. It just never went as falling-apart tender as we pictured it would. Maybe we cooked it wrongly? Likewise, although the Morcilla tasted nice, it was a lot softer than we had anticipated, and it disintegrated on cooking. The Merguez however were fabulous, a great texture with just the right level of spicing, and we are now hoping to get more of them as soon as possible

Star purchase though was some diced Mutton. Mutton is not widely available in the UK. It seems to have fallen out of favour. Most people think of it as being old (probably tough) Lamb. We had actually hoped to get some Goat, with which to make a Caribbean curry, but Goat was not in season, so the Mutton was our second choice. It was really good - very tasty meat, and cooked long and slow it was very tender too. In my opinion it was far superior to Beef or Lamb in this context. I personally think that a lot of the meat sold in our supermarkets today is too "young" - it is sold very soon after slaughter and has had little time to mature and develop flavour. Most people know that extended ageing of beef for steaks is a good thing, so why do they think that Stewing Beef should be sold two days after slaughter?

Anyway, we are hooked now, and are visiting Farnborough every Friday, just to get meat from this stall. I have to say that one of the things we like best about it is that the lady who runs it is really pleasant - chatty, informative, polite, not at all pushy - and genuinely proud of the produce on offer. This counts for a lot in these day of surly, clueless shop-assistants and socially-sterile Self-checkout supermarkets.

This Friday's purchases were two Chicken Breasts, two Mutton Chops, a pack of diced Mutton and a pack of Lamb Mince. Jane and I may well be arguing over who gets to cook what!

Some of you may say that you can get cheaper meat than this. I'm sure that's true, but I believe quality takes precedence over price, and furthermore I like the idea of supporting small local businesses in preference to huge greedy corporates with their dubious commercial practices.
Posted by Mark Willis at 12:00