The aftermath of "The Beast From The East"

After the spell of really bad weather brought to us by the so-called "Beast From The East", followed by Storm Emma, things are gradually getting back to normal, and I have been inspecting my garden for signs of damage.

Luckily, the water-butt doesn't seem to be cracked, because it had some headspace at the top which allowed the water to expand upwards: 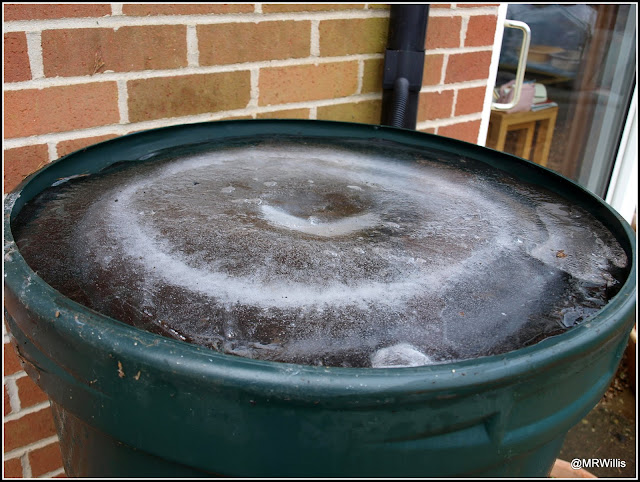 I've not been so lucky with the watering-cans though. Foolishly, I didn't think to empty or at least part-empty them before the big freeze, and two of the four have cracked. 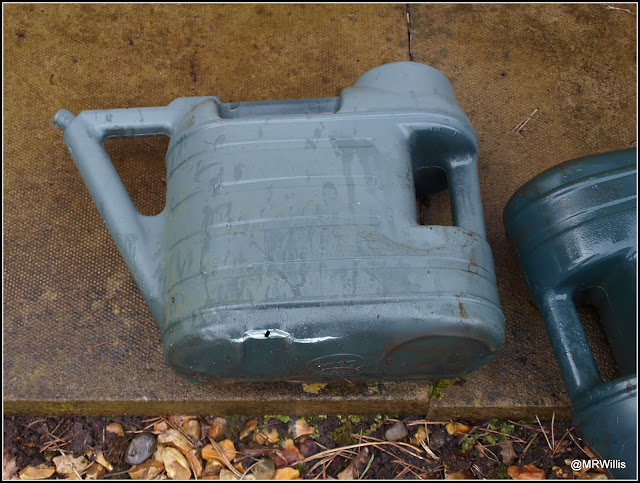 Looking on the bright side, at least it is the two smallest (and cheapest) ones that have succumbed! My favourite big yellow one seems to be OK.

Some of the plants in the coldframes are not looking happy, like this Watercress: 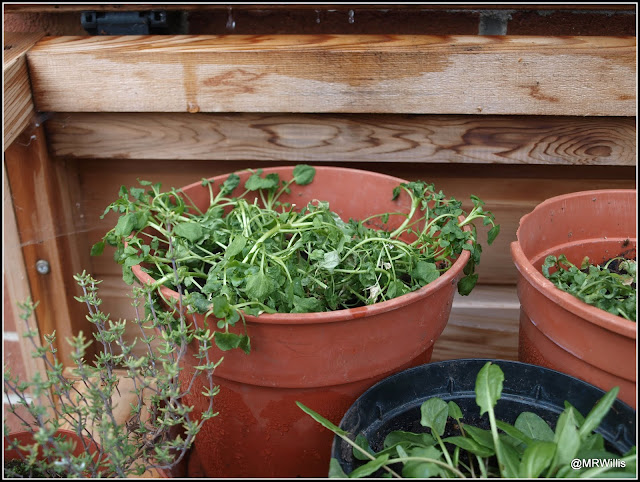 It looks doomed, doesn't it? But you never know; Nature is marvellous and plants can be very resilient.  This Pelargonium seems to be alive too, though I had fully expected it (and three others) to have been killed off. Although the leaves have gone a strange colour, they seem to be firm still, so apparently all right (-ish). 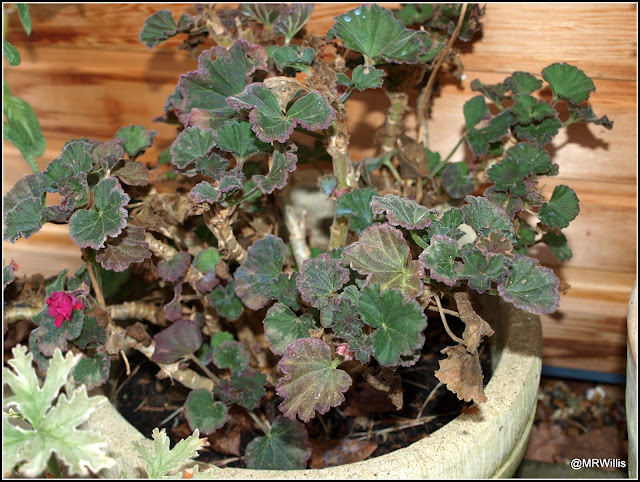 As I mentioned in my last post, the Broad Beans have now gone back outside - well, into the coldframe, that is. The temperature in there is about 2 degrees warmer than in the open air, so yesterday it was about 10C. Those beans need to toughen-up after their extended sojourn in our living-room! Following my usual practice (i.e. playing safe, hedging my bets etc) I have sowed another small batch of Broad Beans, just in case the first lot prove to be too frail.

In similar fashion, my onions have also gone outside. The Long Red Florence ones had been out in the coldframe, but had to be brought in because of the very low temperatures. The compost in their modules had frozen completely solid. Having spent a few days on a warm windowsill, they seem to have recovered all right. I'm worried though that the wild fluctuations of temperature may have confused them, such that they will bolt as soon as we get some 'real' Spring weather.


My other onions - "Ailsa Craig" - have only recently germinated. Onions generally are supposed to be pretty hardy, so I judge that they will survive the current daytime temps of about 8 or 9C and night-time ones of about 3 or 4C.


I have put both trays of onion pots / modules on one of the raised beds... 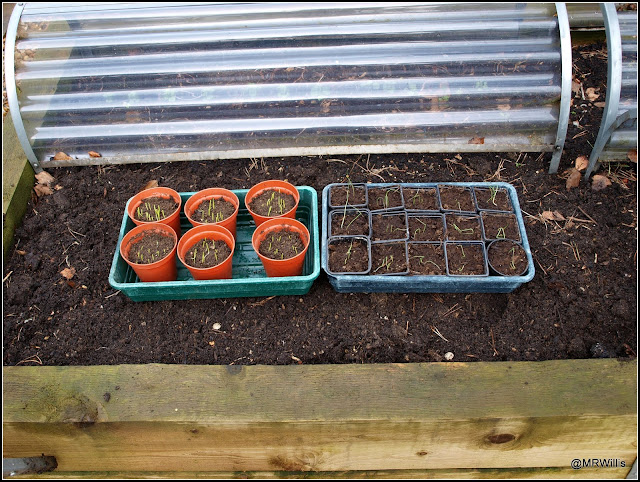 ...and covered them with a long cloche. 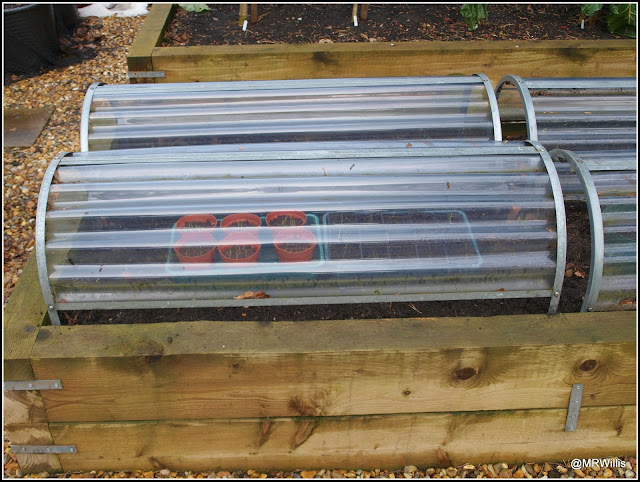 Those cloches don't have any end-pieces, so they don't raise the temperature appreciably at this time of year, but at least they provide shelter from the wind and will keep any frost off.

These Lamb's Lettuce / Mache plants have been under one of those cloches, and the severe weather doesn't seem to have bothered them. But don't they grow so slowly during the Winter? 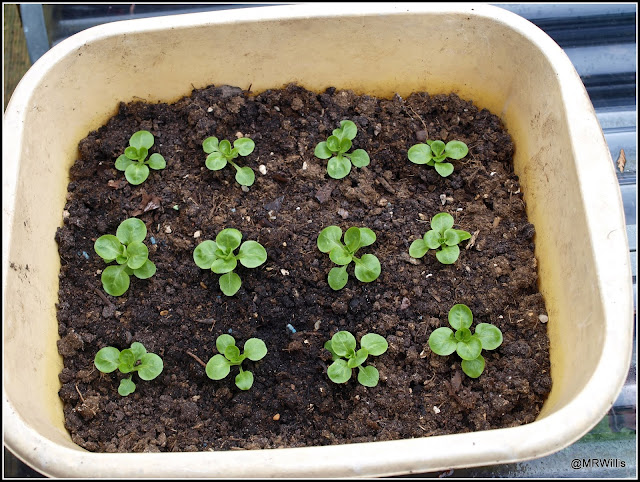 This Radicchio seems to be doing OK too - without protection of any sort. Three days ago it was totally submerged in the snow. 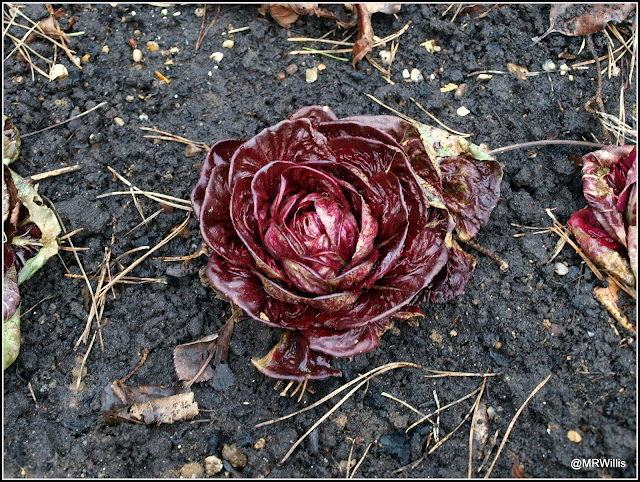 Well, the conclusion from my garden-inspection is that there seems to have been very little damage. The plants that were flattened by the snow are gradually righting themselves; the bulbs are carrying on regardless, and the reduction in the watering-can population can easily be fixed by a visit to Wilko's or Poundland!

Afterthought: My conscience pricks me a little when I realise that I now have to dispose of two almost certainly NOT recyclable plastic watering-cans. If only I had remembered to empty them a week ago...
Posted by Mark Willis at 12:00