Getting those seeds started...!

March to May is the prime seed-sowing time for me here in North-East Hampshire, and just like all gardeners I am keen to "get the show on the road"! With our increasingly unpredictable weather patterns, judging when to sow seeds is always a bit of a gamble, so it makes sense to sow the less cold-sensitive ones first. These include Broad Beans, brassicas, and the allium family. My first batch of Broad Beans is well away now, planted out in one of the raised beds, but I have loads of other tiny seedlings awaiting their turn...

These are the "Long Red Florence" onions which I sowed back on 28th January: 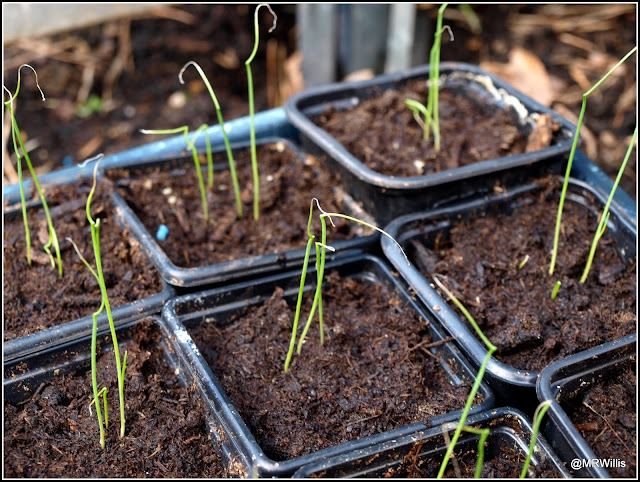 I had them in the coldframe, where I thought they would be fine, but when we had that really cold spell nicknamed "The Beast From The East", their compost froze solid, and I thought I had lost them. Once I noticed their predicament, I took pity on them and brought them indoors for a warm-up. When the snow thawed they went back outside (though under a cloche). At that point they looked a bit the worse for wear.


Thankfully, after a few much milder days, and even some spells of very welcome sunshine, the onions have perked-up a lot, though understandably they haven't grown much. At least they are standing up straight now, so maybe they will do all right after all?


My other onions didn't have the same cold weather nightmare, because they were indoors, just germinating, during the cold spell. They look fine and healthy.﻿﻿


Since onion seeds germinate in a looped shape, it always looks as if there are twice as many, until they unfold and straighten up. I think there are about 10 seedlings in this 9cm pot. When they get bigger they will be separated and planted-out individually with enough space to bulk up. 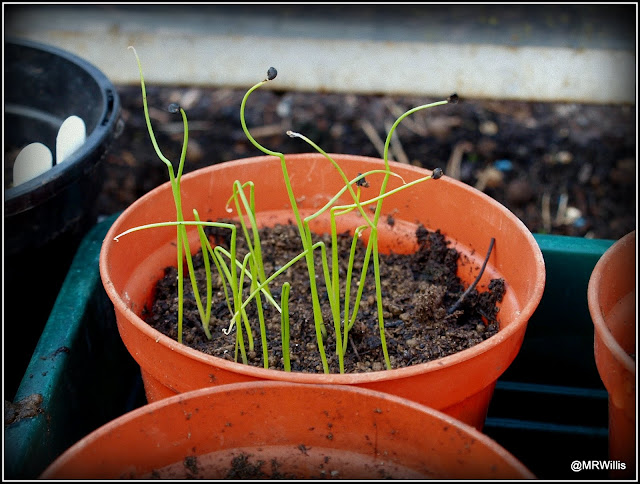 Moving now to the brassicas, first up are some "Golden Acre, Primo 3" cabbages. I germinated the first batch indoors, transferring them to my Growlight House as soon as they came through. Unfortunately, despite the lights, they still went too leggy and I had to move them outdoors as soon as the cold spell ended. I discarded the worst ones and re-planted some of the better ones, planting them very deeply in individual pots. They may be OK, but just in case they aren't, I have sowed a second batch.
﻿

This year I was determined to use up as many as possible of my old seeds that had been hanging around for a while, rather than buy new ones unnecessarily. For instance, I sowed some "Mila" Savoy cabbage, from 2015. None of them appeared, so after a couple of weeks I over-sowed them with some "Greyhound" from 2016 - most of which sprouted very quickly. I suppose it's still possible that some of the "Mila" might come up, and if they do I should be able to recognise them by their crinkly-shaped leaves.


Both "Golden Acre" and "Greyhound" are green cabbages, but I also have some red ones. These are "Red Drumhead". I don't need too many of these, so I only sowed 9 seeds (half of the 18 in my 50p pack bought from Moreveg). So far 8 of them have germinated.
﻿

Next up is Cauliflower "All Year Round". Growing Cauliflower is new for me, but I love eating it, so with the extra space now available to me at my new plot, I thought I should have a try.
﻿

To complete the set, as it were, I have a few Brussels Sprouts "Cromwell". [No photo available, I'm afraid]. I have never been particularly successful with sprouts in my own garden - yields have been small and aphids + whitefly have been numerous - but at the new plot things may be different, so I think it's worth a go.

Evidently, all these plants are at a very early stage, and much could go wrong before they ever reach harvest, but you can rest assured that I'll be doing my best to bring them successfully to maturity! My approach to growing veg is to "hedge my bets" wherever possible, by starting off more of everything than I really need. So, if I want to grow 12 cabbages I'll sow 24 seeds. It's usually easy to give away any surplus plants, and if all else fails they can always go into the compost where they would be recycled. Similarly, I often sow seeds for more than one variety of each veg - so two types of onion instead of just one; two types of green cabbages, three types of leek, etc. This way, if one performs poorly in this year's weather conditions, maybe another will do well.