Who else has a Chilli Fiesta within walking distance? Well, my home town Fleet hosted its first-ever Chilli Fiesta yesterday, on the field we call "The Views", next to our local Council offices, about three quarters of a mile from where I live, so it would have been foolish of me not to attend...

Obviously the key theme of this event was the celebration of all things chilli-related, but it was a theme interpreted in many different ways. Many of the exhibitors / traders present were selling food. Food to eat there-and-then as well as food to take away - Vietnamese food, Greek food, Caribbean food, Indian food, all sorts of food as long as it contained chillis somewhere. (I guess that even the pie stall was offering chill pies on this occasion!). There were lots of stalls selling chilli-flavoured condiments: sauces, relishes, rubs and powders: 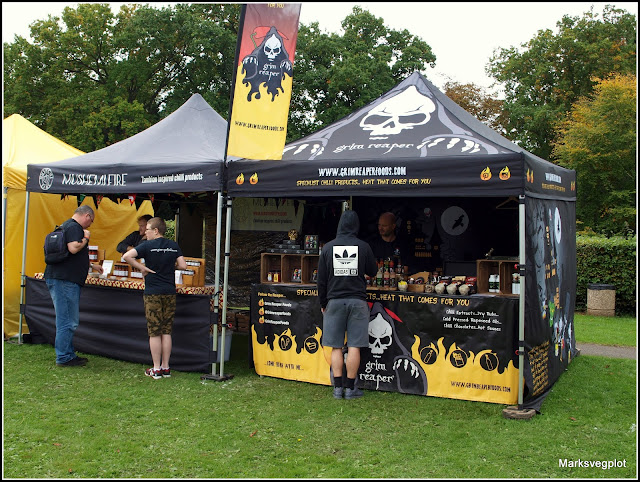 To be honest, I'm not a great fan of bottled chilli sauces, and I was much more interested in the stalls offering chilli plants and seeds. I was very pleasantly surprised to meet chilli guru Joy Michaud from Sea Spring Seeds, who I have known via Twitter for several years. Her stall was the one I was most interested in! Incidentally, Joy is a bit of an authority on tomatoes as well, so you can see that we share several interests.


Living nearby, and being a natural Early Bird, I went to the Fiesta very soon after opening time. This allowed me to avoid the crowds and have a chat with some of the stallholders. I was able to spend some time chatting with Joy and tapping-in to some of her expertise. She has a very engaging style of interaction with her customers, and it was nice to see her offering good practical advice without being patronising.

Another stall that caught my eye was that of Sonny Chana


Sonny is primarily an artist, but his current craze is for chillis - painting them as well as growing them (and selling them). Again, since it was not yet busy, Sonny was happy to talk, which I think is a vital requirement for anyone who has a stall at a public event. He persuaded me to buy some seeds for a Chocolate Cayenne chilli, which allegedly has a lovely smoky taste which I am keen to try. I didn't buy any of Sonny's paintings (though several were on offer), but my Christmas wishlist has been suitably amended, if you know what I mean...

One of the other main attractions of the Fiesta was a chilli cook-off, in which teams of entrants have 4 hours to prepare a dish of Chilli con Carne. At the conclusion, customers who have paid their fee get to try all the offerings and vote on which is the best, and the winner gets a prize. I didn't stay to see the judging, but I had a chat with a couple of the teams. The team called The Smoking Gun were using a very unusual set-up. It's just like what is used in Hungary for cooking goulash (which is hardly surprising since the chap in my pic told me that his father is/was Hungarian!) 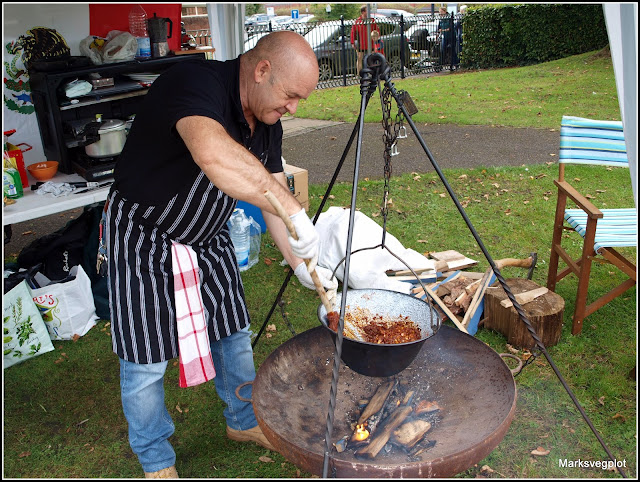 Another aspect of the event was a chilli-eating contest, in which entrants have to eat progressively hotter chillis within a given length of time until only one person is left in the contest. This is not the sort of thing I would enjoy, either to participate in or to watch. I think that too many people are obsessed with the heat of chillis and perhaps fail to appreciate their other characteristics, such as flavour. Still, each to their own, and if you like eating chillis until you are sick, don't let me stop you.

I felt that the atmosphere of this Chilli Fiesta was very similar to the Fleet Food Festival (now an annual event), about which I have previously written. That's to say quite "mellow". It was good to see people taking a genuine interest in real, interesting food offered by small (often local) businesses, and many younger people taking their kids along too, to sample something different. The Caribbean reggae music in the background was perhaps not up to the standard of Bob Marley, but it suited the occasion quite well!

I didn't spend a lot - though I was tempted - and I came away with just these four packets of seeds: 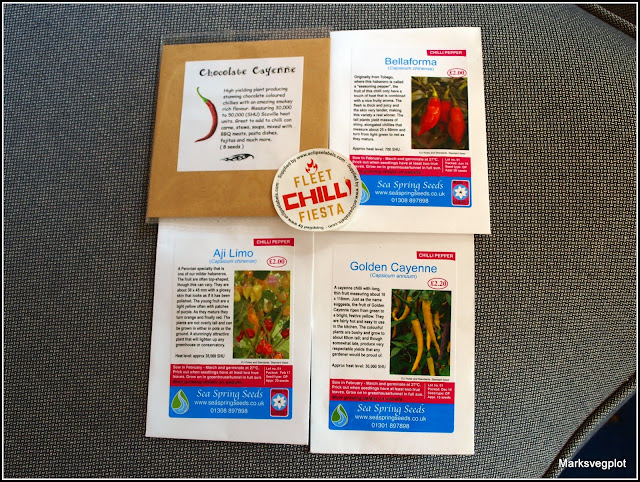 You'll notice that two of the varieties are Cayennes. I find that Cayenne types are amongst the most reliable performers. They produce a good crop of tasty but not too hot fruits, which are ideal for the sort of cooking we do. "Bellaforma" sounds interesting too. It looks like the very hot "Paper Lantern" Habanero, but is very much milder. Its fruits apparently have thick flesh, with a tender skin and a nice fruity aroma. "Aji Limo" is an interesting one too. Joy explained that although usually any chilli called "Aji-anything" is going to be a Baccatum type, this one is a Chinense. Described as "stunningly attractive", this Peruvian speciality will hopefully brighten-up my chilli-patch quite nicely next year.

It will have to do well if it wants to out-shine this year's "Aji Benito"...


One thing I forgot to mention earlier: entry to the Fleet Chill Fiesta was only £1, and some (possibly all?) of the proceeds are going to local charities, which makes the event even more worthwhile. Overall, a very good event, and one which will hopefully be repeated.
Posted by Mark Willis at 11:00