It's always a little sad when the garden begins to look "over". Although I do have some vegetables for the Autumn and Winter, and even some PSB growing away strongly for next year's harvest, most of the contents of my Veg Plot is always stuff that matures in July, August and early September, so on its last legs now.

After yielding a satisfyingly huge crop, the tomato plants have been completely de-leafed now and only have a few fruits left to ripen. 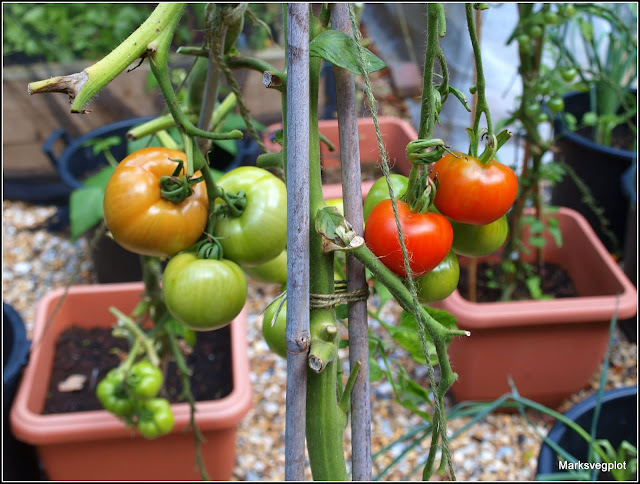 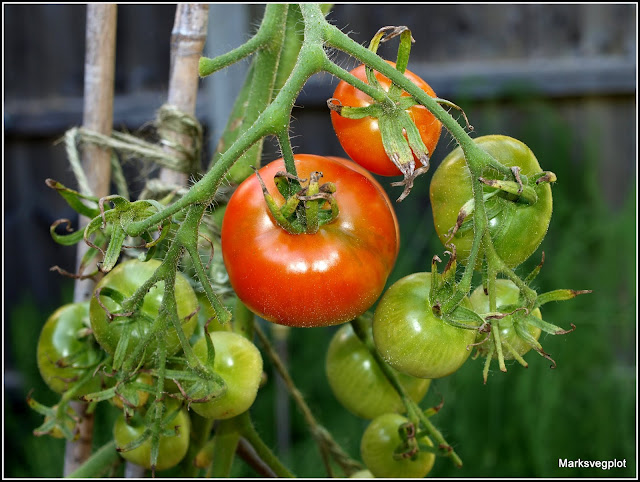 The Runner Beans are past their peak now, though they will probably go on producing pods for at least another month now. Lurking in amongst the foliage there are plenty more bunches of fast-swelling pods like these: 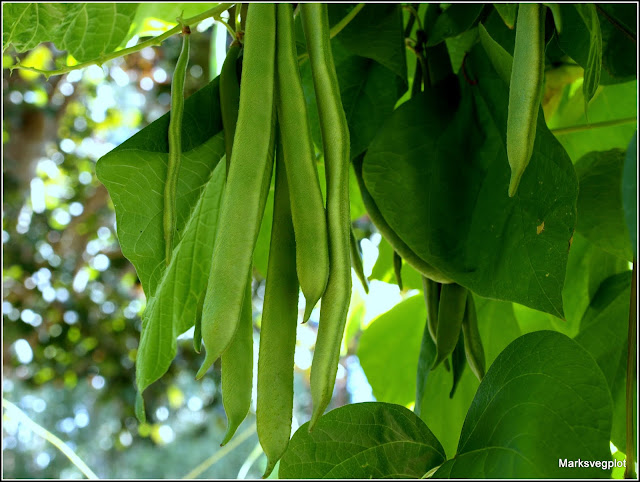 But at the same time, I notice a few like this too - limp and yellowing, ones that will never mature. 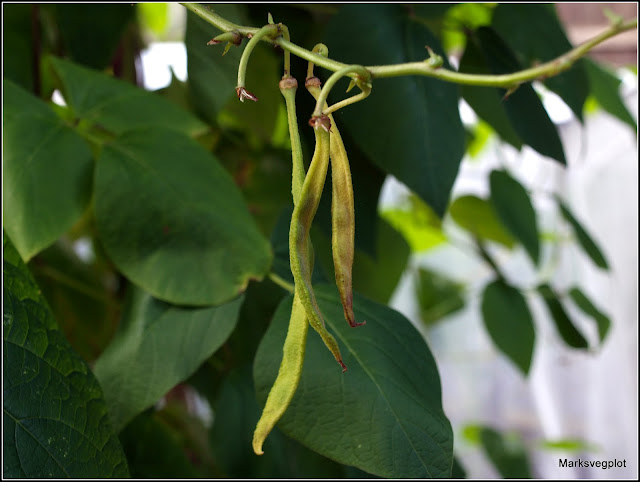 My solitary Courgette plant is on its last gasp too. I have removed all the old, mildewed leaves, but the plant is determined to keep producing more. 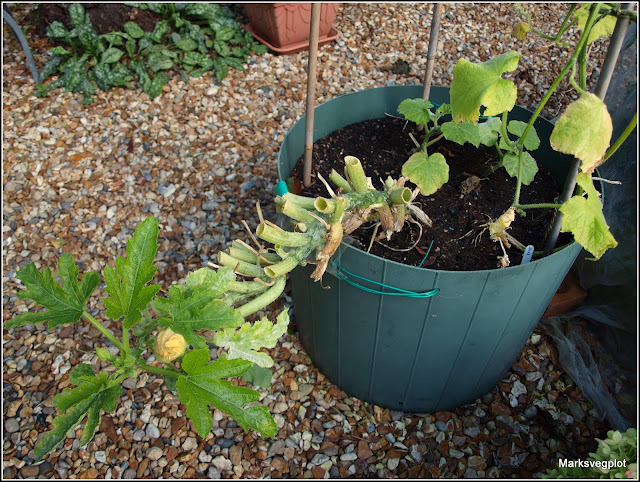 This week it put out another flower, so maybe I'll get one more fruit before the season ends. Unlike many gardeners, I have not been inundated with courgettes. I think my plant has produced 9 or 10 fruits, and we have managed to keep pace with them. Our attempts to learn to like this vegetable have met with a modicum of success, but I don't think I'll be growing it again next year. 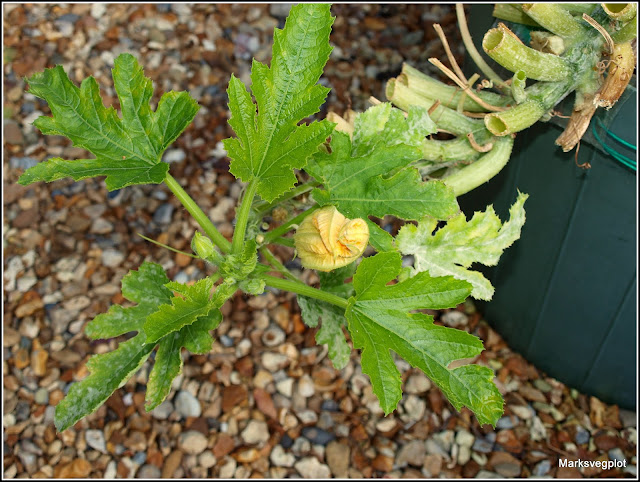 The things I sowed in the pots which formerly held potatoes are looking OK. I have harvested a small but viable crop of French Beans, and now the Carrots and Leeks are shaping-up quite well:


The Purple Sprouting Broccoli is getting big now - pushing up strongly against the mesh that protects it from butterflies. 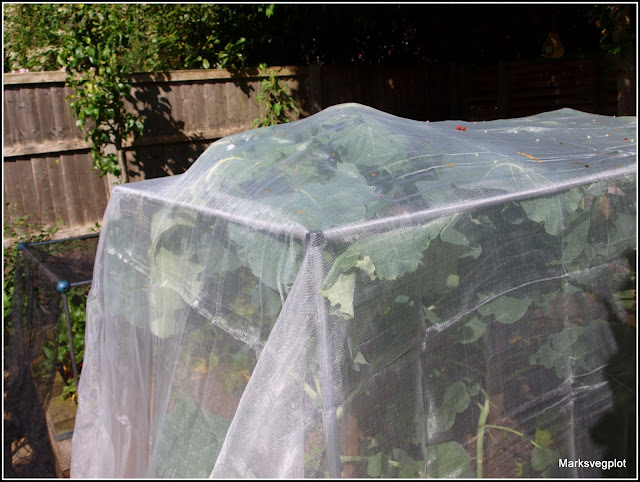 I'm reluctant to remove the mesh just yet, because there are still some Cabbage White butterflies about, but it's getting to the stage where keeping the mesh on may be doing more harm than good, because it may be restricting the growth of the plants. I can't raise it any further, because the piece of mesh is not big enough!

It will soon be fruit-picking time for me. This will not take very long! One of the six fruits on my pear tree fell off today, which I interpret as a sign of maturity, so the other five may be picked soon.


My "Winter Banana" apple tree only produced four fruits this year, and they have all been attacked by some wretched boring (literally) insects (someone suggested Codling Moth grubs). Two of the fruits started to rot, so I picked them and salvaged what I could. Their flesh is surprisingly dense for an apple, but juicy and tasty too. Hopefully next year I'll have more.


My other apple tree ("Laxton's Superb") has not been affected by the boring insects, and has quite a lot of small but very handsome fruit on it. They are supposedly ready for picking in October, so not long now... 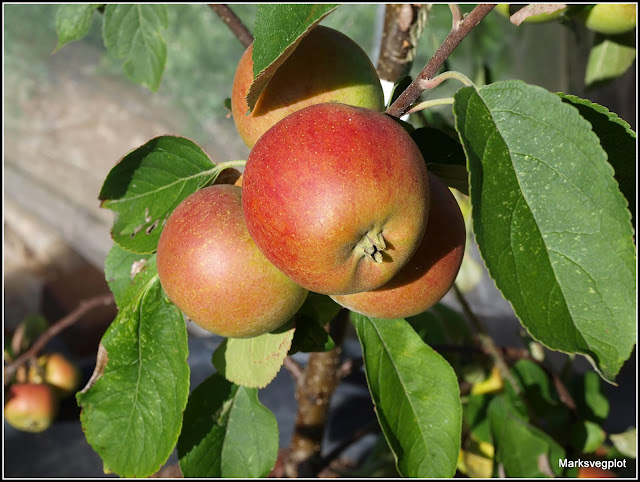 The days are drawing in now, and already the nights are much cooler. The garden in the mornings is dewy and festooned with spiders' webs. Soon it will be time to get the cloches and coldframes back into action. After a blazing hot June, Summer never really "took off" this year and Autumn is upon us already.
Posted by Mark Willis at 17:00