This Focaccia-style bread is inspired by a recipe that Jane found many years ago in a magazine. Along with many other such recipes it was clipped from the magazine and pasted into an album originally designed for photographs. She has made this bread many times and it has become one of our favourites. Because of the salt crystals which are sprinkled on the top before baking, we usually call it "Salt bread". It goes really well with Italian food, especially dishes involving a sauce or ragu which needs mopping-up. 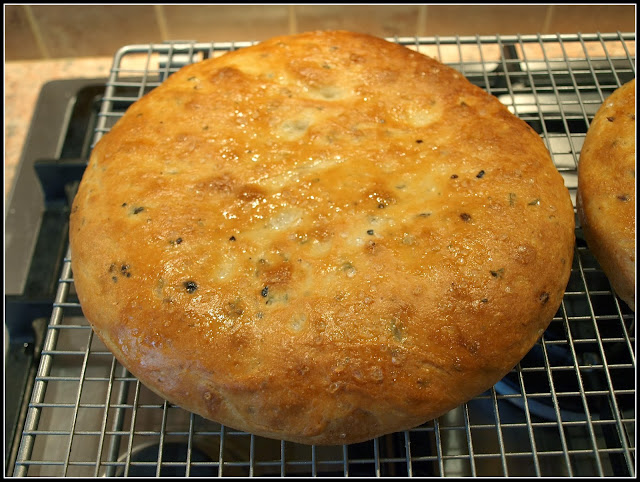 Although I know that I can always call opon Jane for advice, my bread-making skills are beginning to improve, and I feel confident enough to improvise a bit, and not follow the recipe too slavishly. For instance I now know whether a dough needs more flour or water to achieve the right consistency, and how to tell from the feel of it when the dough has had enough kneading.

The most important feature of this bread is its flavourings - loads of Juniper and fresh Thyme. Since there is not much fresh Thyme in my garden at present I augmented it with some Winter Savory, which has a flavour somewhere between Thyme and Rosemary.


The recipe calls for 30 Juniper berries, though I didn't feel the need to count them - I just used about a tablespoonful! Juniper is a major ingredient in the flavouring of Gin, which we often use along with Bay and Juniper as a marinade for venison. Its flavour is hard to describe: sort of medicinal, in a nice way? Fresh and "healthy" - redolent of the breezy slopes of a Mediterranean mountain perhaps. Juniper berries, despite being dried, are not hard - more chewy - but they are not pleasant to eat whole, so they need to be crushed with a pestle and mortar: 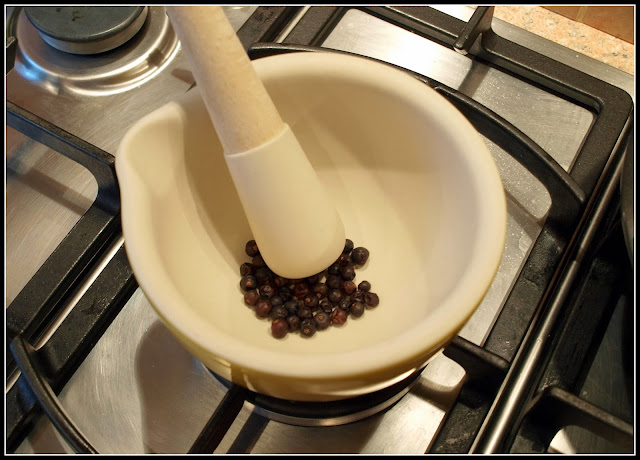 The crushed berries are combined with the Thyme and Savory leaves, stripped from their woody stems, prior to being incorporated into the dough:

The method for making the bread is quite conventional:

Put into a large bowl 450g bread flour, 1 level teaspoonful salt, 1 heaped teaspoonful dried yeast, 2 tablespoonfuls olive oil and the herbs plus Juniper. Stir them all up and add about 250ml warm water (a little more if necessary). Knead roughly with your hands until it all comes together, then transfer the dough to an oiled surface. Knead the dough thoroughly for at least 10 minutes, aiming to create a very elastic dough. Put the dough into a lightly-oiled bowl, cover with clingfilm and stand it in a warm place for about an hour and a half. [I used the airing-cupboard, which is great for this purpose.]

When the dough has doubled in size, remove it onto your oiled work-surface and knock the dough back (in other words bash it around a bit!). Then transfer it to your chosen (oiled) baking-tin (a wide shallow one is best), spread it out to cover the whole dish and brush it generously with olive oil, using a pastry brush. Sprinkle some coarse salt on the top, cover with clingfilm again and let it stand for another 25 - 30 minutes. Meanwhile turn the oven on and get it up to 230C (about 210C for a fan oven).

Then the final part: cook the dough for approx 15 minutes, by which time it will have risen and turned an even gold colour all over. To tell if the loaf is fully cooked tip it out of the baking-tin and tap it briskly on the underside. If it makes a hollow thud (rather than a dull heavy one), then it is ready. I usually bake a loaf for another couple of minutes upside down, just to make sure it doesn't have a "soggy bottom"!

Take the loaf out of the baking-tin and place it on a wire rack to cool. As you can see, I made my dough into two loaves, the plan being to eat one immediately and freeze the other for later use. 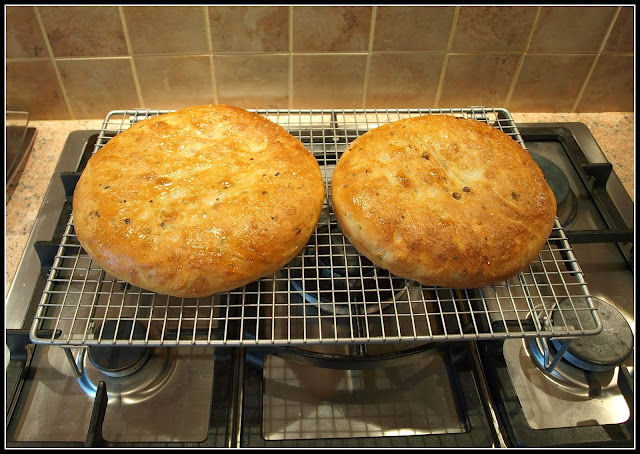 Before the loaf cools down, brush the surface with about a teaspoonful of olive oil, which will be absorbed into the bread as it cools, making it even more "springy". 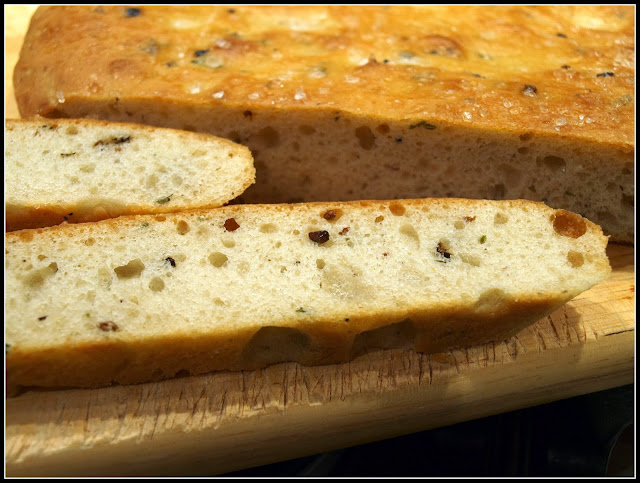 As I said, this bread is great with dishes that have lots of sauce or gravy. It is also good for dipping in olive oil and balsamic vinegar. If you don't eat it all straight away, it can be toasted and made into bruschetta or crostini - or spread with garlic butter. Probably not so good with Strawberry jam though!
Posted by Mark Willis at 16:30