Many of you will be aware that we have been trying to eat less meat. This dish of mine was part of that initiative. I must also say that the concept is entirely my own, and was inspired to a large extent by whatever we had in the fridge at the time! 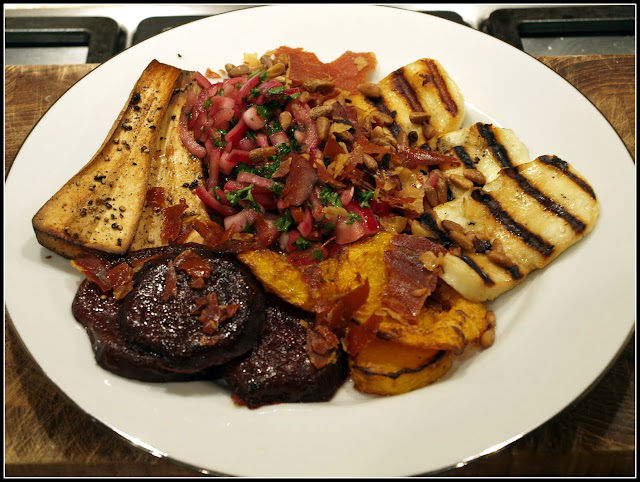 ﻿
The "recipe" (if you can call it that) came together a bit at a time. First off I wanted to include some roasted vegetables. We had Butternut Squash, Parsnips and Beetroot, all of which are good for roasting. I was able to prepare them well ahead of serving-time, slicing them into fairly thin pieces that would cook quickly, but also go nicely caramelised at the edges:


I lined some baking-trays with silicone paprer so that the veg would be easy to lift off when cooked. I also "massaged" the veg with a light layer of oil, and sprinkled them with salt and pepper.
﻿

Another element that I made in advance was a red onion relish. I peeled and sliced some red onions and marinated them in red wine vinegar with a spoonful of Pomegranate molasses. I was a bit unsure about that last ingredient, but I had a good sniff of it and a little taste and decided that it was certainly in keeping with the general idea. Steeping the onions in vinegar like this softens them and makes them less harsh. Nearer serving-time I enhanced the look of the relish by adding some chopped fresh Parsley:
﻿

﻿ The main protein element of my dish was to be some Halloumi cheese. It's delicious cooked in a griddle-pan (as long as you don't overcook it, which makes it too dry).
﻿

Let me say at this point, if you are thinking of using the low fat version of Halloumi for this, forget it. It is incredibly rubbery and the cooking just exacerbates this!

Rummaging in the fridge for stuff to cook I found four slices of Smoked Ham that had been hanging around for quite a while and was at the "Use it or Lose it" stage. Now I know my dish was supposed to be a non-meat one, but I couldn't resist this. I baked the ham until it went crispy and then crumbled it in to "bacon bits". It was exceptionally tasty! All you vegetarians out there can just ignore this last bit...
﻿

﻿ ﻿Prior to finding the ham, I had toasted a handful of Pine-nuts which were going to add the crunch element to my dish, but with the advent of the ham they turned out to be unnecessary (but I used them anyway).


We didn't have any raw beetroot, so I sliced up some ready-cooked, and just slipped it onto the baking-tray with the Butternut Squash about 20 minutes before serving. You wouldn't have been able to tell that it wasn't roasted from raw.

Co-ordinating this lot was a bit of a challenge, and I had to keep going into the kitchen to peer into the oven to make sure the veg was cooking OK and not burning (it took about 40 minutes in the end). Anyway, the time to plate up eventually came. I wished we had some bigger plates! My dish wouldn't score many points for presentation:
﻿ 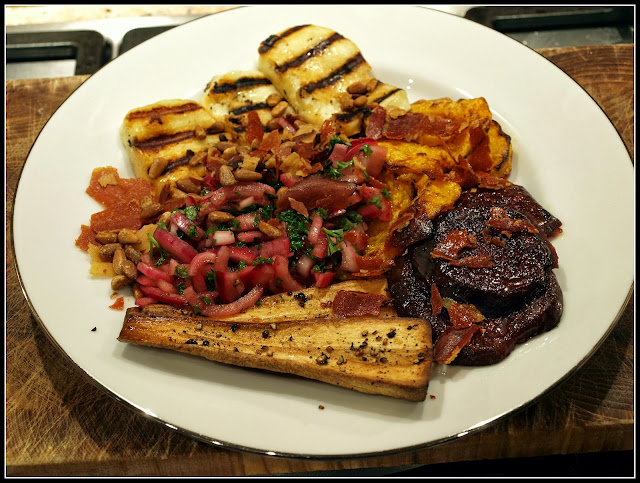 ﻿
So there we have it: griddled Halloumi; roasted Butternut Squash, Parsnips and Beetroot; Red Onion relish; toasted Pine-nuts and crispy Smoked Ham.

In a restaurant, you would get about half this amount of food, and it would be possible to spread it out more and make it look attractive. However, we do not live in a restaurant, and we needed plenty of sustenance. Let me assure you, our plates were cleared!﻿ 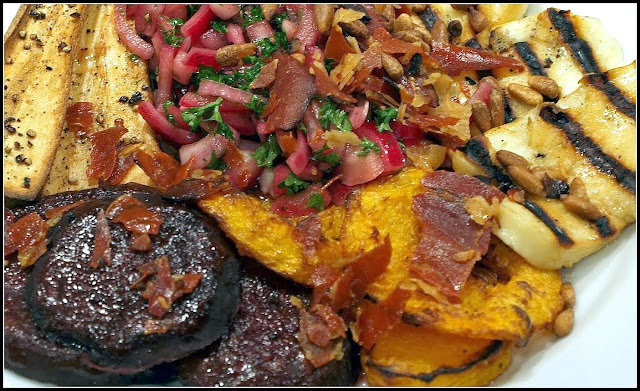